"Game of Thrones" fails the female gaze: Why does prestige TV refuse to cater erotically to women?

It's not just about showing more sex from a woman's perspective. It's about who has the right to be turned on 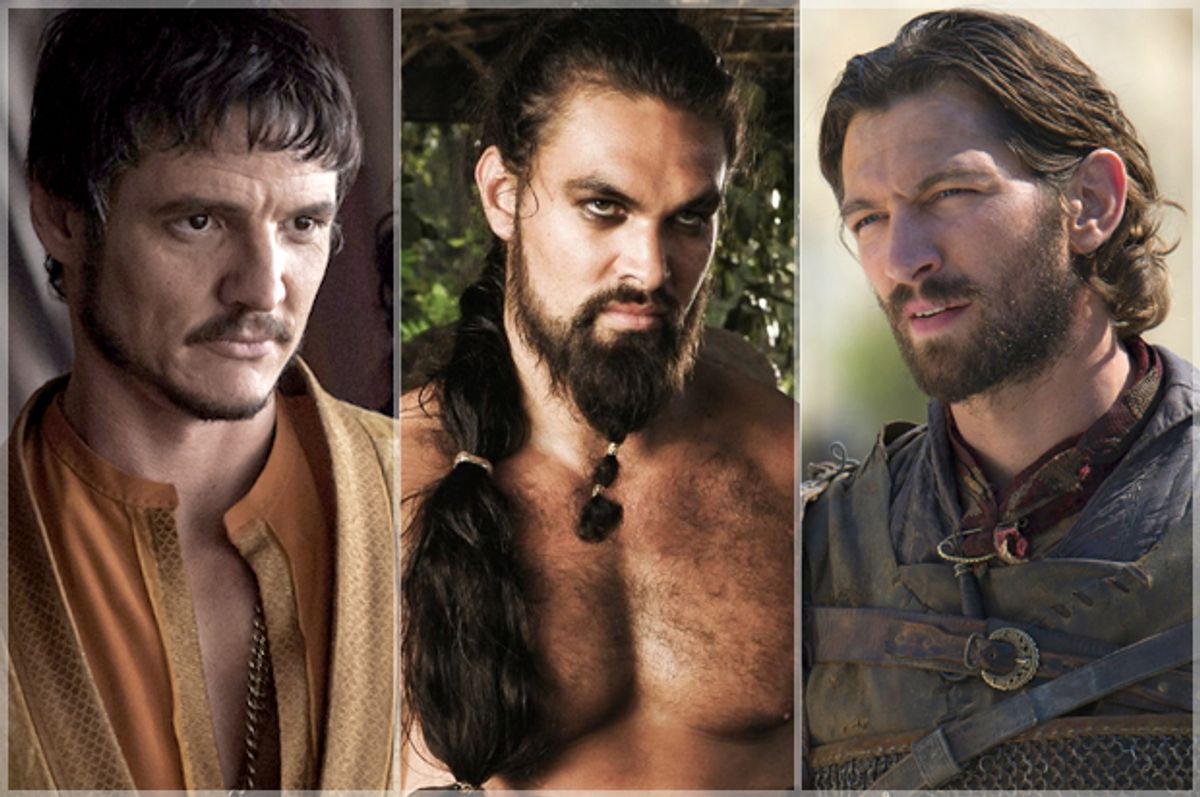 There’s no way to talk about arousal or its attendant feelings with dignity, so I’ll start with a frank and graceless admission. As I (a straight cis woman) watched the scene on this season of “Game of Thrones” in which Daario undresses while Daenarys watches, I felt something: a twinge of erotic pleasure. It caught me off-guard. I’m used to seeing breast after breast after buttock after breast while understanding that they’re not there for me, that my enjoyment of them—at whatever level I choose—is akin to whatever Will Hunting felt while looking at equations in the physics department. I’m free to look and extract whatever I can from looking, but they really weren’t put there with me in mind.

Thankfulness follows an absence, and this sad little experience highlighted that physical arousal just isn’t part of my TV viewing experience. In other words, it taught me that straight male viewers are constantly getting an extra layer of experience. There are a lot of problems with that, but here’s the one I want to talk about: the problem isn’t just that women onscreen are marginalized from the narrative (though they are—Shae, you deserved better), it’s that the women in the audience are getting physically marginalized too.

I’m far from the first person to say we need more manparts on "Game of Thrones." But this isn’t just about penises vs. breasts—seeing Tywin on the john in the finale had certain charms, but not the kind I mean. It’s about situation and camera angle. It’s about who has the right to be turned on. It’s about whose genitals are worth catering to.

I’m emphasizing that because conversations about sexism on TV have a tendency devolve into the negatives of objectification: how it dehumanizes, marginalizes, decentralizes. The “male gaze” theory is so familiar now that we sometimes let it flow into abstractions it was never guilty of. We all know, thanks to Laura Mulvey’s Visual Pleasure and Narrative Cinema, that the male gaze eroticizes the object it looks at, and that the camera facilitates that look. But there’s more than visual pleasure or narrative centrality at work. There’s the right to what some have called the female gaze. The erotic—from a female viewpoint—rarely finds its way onscreen, but that scene between Daario and Daenarys shows that the show is capable of doing it.

So why doesn’t it do it more?

Rebecca Pahle points out in the article above that actresses Carice von Houten (Melisandre) and Sibel Kekilli (Shae) have both asked for more male nudity, and that Kit Harington (Jon Snow) and Peter Dinklage (Tyrion Lanniester) have offered.

And yet, not even the HBO exec who told “Game of Thrones” director Neil Marshall “I represent the perv side of the audience, and I’m saying I want full frontal nudity in this scene” has managed to let his definition of the perverse include lingering on male torsos and pelvises, let alone full frontal shot. (Isn’t it telling that “full frontal nudity” doesn’t even need the adjective “female” before it?)

If “Game of Thrones” were just run-of-the-mill misogyny, we wouldn’t be talking about it. The trouble is that there’s a knowing aspect to the show’s production, a whiff of intentionality in its exploitation. Some choices seem so self-aware that many critics have wondered whether the nudity amounts to some kind of subversive response. And there are reasons to read the show charitably: it’s glorious fun to watch, it seems to respect women in other contexts, it takes some of its female characters seriously, and it certainly spreads its violence around; women are far from the only ones tortured, abused and displayed. Arya even got to meet Brienne of Tarth! Is there an argument to be made here, then, about inequality, or sexism, let alone nudity? Is such a thing even worth doing?

Framed that way, maybe not. But there are other frames.

Here are some other arguments I’ve run into while surfing "Game of Thrones" comment threads whenever this comes up:

Blame the market. I’m not their target demographic, that’s all there is to it. HBO does boobs. It’s just what they do. The price we pay for excellent television is catering with strange and unrelenting specificity to the fifteen-year-old straight male demographic. That’s capitalism.

The trouble with that argument—as the “Twilight” series demonstrated by grossing over $3.3 billion worldwide—is that there are powerful economic demographics other than fifteen-year-old boys who greatly appreciate getting to look rather than be looked at. In other words, there are good economic reasons to try to get female viewers. “Game of Thrones” just isn’t trying. Then there's:

The show treats everyone horribly! Get over it.

I find this argument especially disingenuous, but it crops up more than you’d expect because people tend, thanks to the stupid R rating in films, to equate sex and violence. Whenever people complain about gratuitous female nudity on the show, others reply “well, what about the people getting their heads cut off? Why don’t you care about them?” The implication is that there’s some kind of parity here. Female nudity = heads getting chopped off.

The third argument is mock-historical:

Like it or not, it goes, this is a kind of semi-historical realism.

It’s a strange argument for a fantasy series, but there is a medieval sensibility to “Game of Thrones,” and we’re meant to believe that History was filled with rape and ambient female nudity because women had no power and that that’s just how it was. The nudity serves the show as much as the bloodshed.

And the thing worth noticing here is that it actually takes a huge amount of work to limit that pleasure to men. If we reflect on how the show specifically and slavishly caters to penises and their blood flow—if we think of that as a positive choice rather than a lazy but innocent default—it becomes a truly pernicious choice. (Try taking a picture of a naked couple and exclude the penis. It’s work!) We like to think of men as perpetual horndogs, which is hopelessly unfair to men when you think about how hard HBO is trying to turn them on. It’s weird how much effort goes into tantalizing penises with unnecessary naked women, and it’s weird how much effort goes into not showing any male parts in turn. None of that is natural, or realistic, or even slightly sane; it is not The Way Things Are. Producing those specific effects and no others takes extraordinary effort. The show is revolutionary in the painstaking care it takes to push the boundaries on (female) nudity and to provoke (male) arousal.

While we’re on the subject of female nudity, one might wonder whether there are any actual lesbians in “Game of Thrones’” universe. I don’t think we’ll ever know, but there are certainly gay men. It’s worth noting that even the scenes that come closest to voyeuristically featuring nude male bodies in an explicitly sexual context are still shot with a male viewer in mind. The famous Olyvar-Loras love scene is the most explicit in terms of how much of a man’s body it’s willing to show in a passionate context. It’s a great scene because it’s both hot and rare, but it’s hard not to speculate that the camera was only willing to go as far as it did because the male gaze is now occasionally allowed be gay.

(Lesbians, I’m sorry: “Game of Thrones” believes in you as much as Janos believes in giants. People of other races, you will appear to spice up the white world, usually in a state of comparative undress. And even when people of color do make it onscreen in a sexual context, Grey Worm, slave though he might be, is literally completely submerged while Missandei is completely exposed. There is nothing made for you here.)

And it’s work! Work the camera is refusing to do for us!

Women deserve to see male bodies sexually—not askance, or because they happen to be naked or look dashing while fighting—but directly, in scenes that regard the male body as the aesthetic object it is. I think most narrative would benefit from less nudity, not more, but as long as we’re in the terrain “Game of Thrones” has made possible, this is a loud plea for the female gaze. Dear Alex Graves and Neil Marshall: next time you get the urge to show us a suppurating wound on someone’s thigh or an exploding eyeball, consider instead, letting the camera linger lovingly, with an explicitly erotic emphasis, on male pecs, travel down masculine legs, watch men emerge from bathtubs even though it has very little to do with the plot. Guys, we need it more than you do.