Forget about ideological purity. Republicans want a leader who can raise lots of dough and spread it around 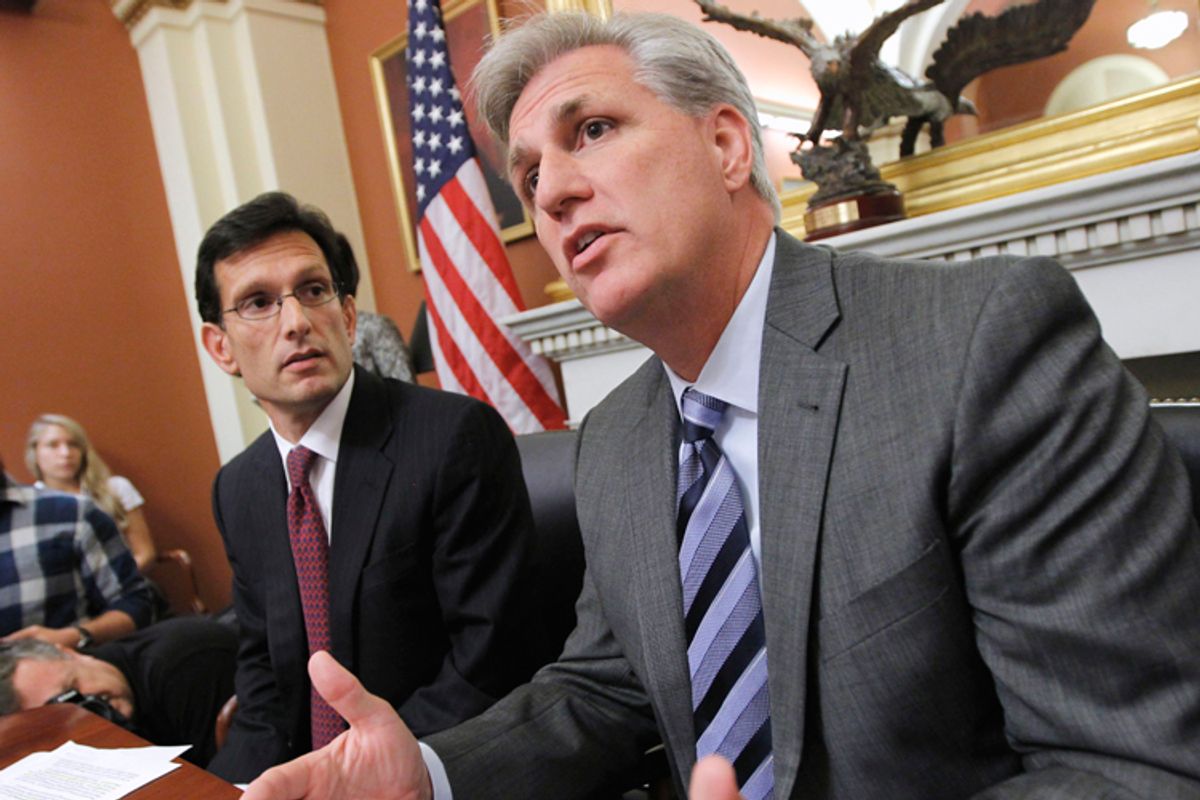 It's interesting that in the midst of an alleged populist uprising that destroyed the career of a GOP leader perceived by the voters as being an establishment man too close to the Big Money boys, the Beltway has coalesced around the idea that the ascension of his successor as an alleged "amnesty" supporter shows that the establishment is pushing ahead toward reform. Indeed, quite a few commentators take this as a sign that the grass roots don't really care about "amnesty" either, despite the energetic push from talk radio (not to mention the internal polling that obviously spooked Cantor into sending out mailings that made him sound like one of those people who wants to put a moat filled with alligators around the border). And for all we know, this may be true.  There are a lot of reasons why Eric Cantor was sacked by his constituents and perhaps his temporary and tepid support for some accommodation to young immigrants was the least of it.

But any idea that the consequence of Cantor's defeat would be a new leadership decided on the basis of ideology misunderstands what drives the choice of partisan leaders. Whenever a powerful member of the party leadership retires or goes down to defeat, the rest of the members lose a very important resource: money. And lots of it.  The way these people ascend in partisan politics isn't through their "beliefs" or any kind of ideological purity, it's through their ability to raise money from big donors and industry and their strategic sense of how best to spread it around. Cantor may have been a jerk -- everyone says so.  But he was the majority leader because he had bought partisan loyalty over the years from being in bed with big money and judiciously spreading it around. The Tea Party might think Kevin McCarthy is a squish on immigration but everybody in the GOP caucus knows that their own futures rest on made men like him.

But it isn't just money. It's also organization. As Robert Costa reported last Friday, McCarthy had it in spades. Not that he built it himself, mind you. He inherited the chief of staff of the most ruthlessly effective House majority leader in GOP history:

McCarthy’s office — led by chief of staff Tim Berry, who served in the same role for former House majority leader Tom Delay (R-Tex.) — methodically built their count with a numerical ranking system that DeLay had mastered. That gave McCarthy critical intelligence on who might need extra attention. And McCarthy’s top deputy whips weren’t his closest friends, but rather committee chairmen, a sign he understood how best to reach members — through their bosses.

Costa reports that unlike Tom DeLay's efficient machine, the triumphant wingnut contingent walked around like blind salmon for days, fretting about who or what they might recruit to fight their fight within the caucus. On Friday Rep. Raul Labrador finally stepped up, but Costa reported that McCarthy's ascension was already a done deal.

Kevin McCarthy has been planning this ascension since the beginning of his political career. He's an establishment man all the way, and in the establishment, money talks. (In fact, money's "speech" has even got constitutional protection.) It's how power is built and it's not exclusive to the Republicans. Democrats do it exactly the same way.

But all is not lost for the Tea Party insurgents. According to Costa:

much of the attention has already turned to the race to replace McCarthy as whip, with three members — Reps. Steve Scalise (La.), Peter Roskam (Ill.) and Marlin A. Stutzman (Ind.) — competing for the third-ranking job.

Behind the scenes, Scalise, chairman of the conservative Republican Study Committee, and his boosters were making the argument that the right needed to get behind a southern conservative and not let the House’s current establishment control all three top positions.

Roskam, a dutiful member of the current leadership team as chief deputy whip, was finding some support, but he was also having trouble countering Scalise’s case with many members who are frustrated with how things have played out.

So perhaps the Tea Partyers will have one of their own in the leadership after all -- where he will have to build his political base. And to do that he will need money. And so it goes.

One last note about Kevin McCarthy. The good news for him is that unlike his predecessor, being seen as a squish on immigration (although he isn't really) will never hurt him in his district in California. In fact, it will help him keep his seat. Gov. Pete Wilson pretty much destroyed the GOP in his state with his immigrant bashing nearly two decades ago and California Republicans aren't about to singe their fingers on that burner again.

This makes McCarthy a soothing choice for the Republican establishment. They do not like to have leaders in unsafe districts. Being a leader from a blue state will spare him a challenge from the Tea Party, the fear running through every red state Republican after Cantor's ignominious loss. (In California, the Tea Party is three guys idly wandering through the farmers market with a Gadsden flag in one hand and a Venti double soy macchiato in the other.) In an odd way, he's as safe as it gets for Republican lawmakers these days.

But that may not last for McCarthy or any other blue state Republican. Right now McCarthy's district is only one-third Hispanic. But not for long. And while some Tea Partyers out in the country may think he's some kind of left-wing amnesty supporter, his constituents will know better. Considering California's jungle primary system, it's entirely possible that the next GOP majority leader will eventually lose his seat in a primary just as his predecessor did -- to a progressive Democrat, probably a Latino. Wouldn't that be something?