Amazon is not your best friend: Why self-published authors should side with Hachette 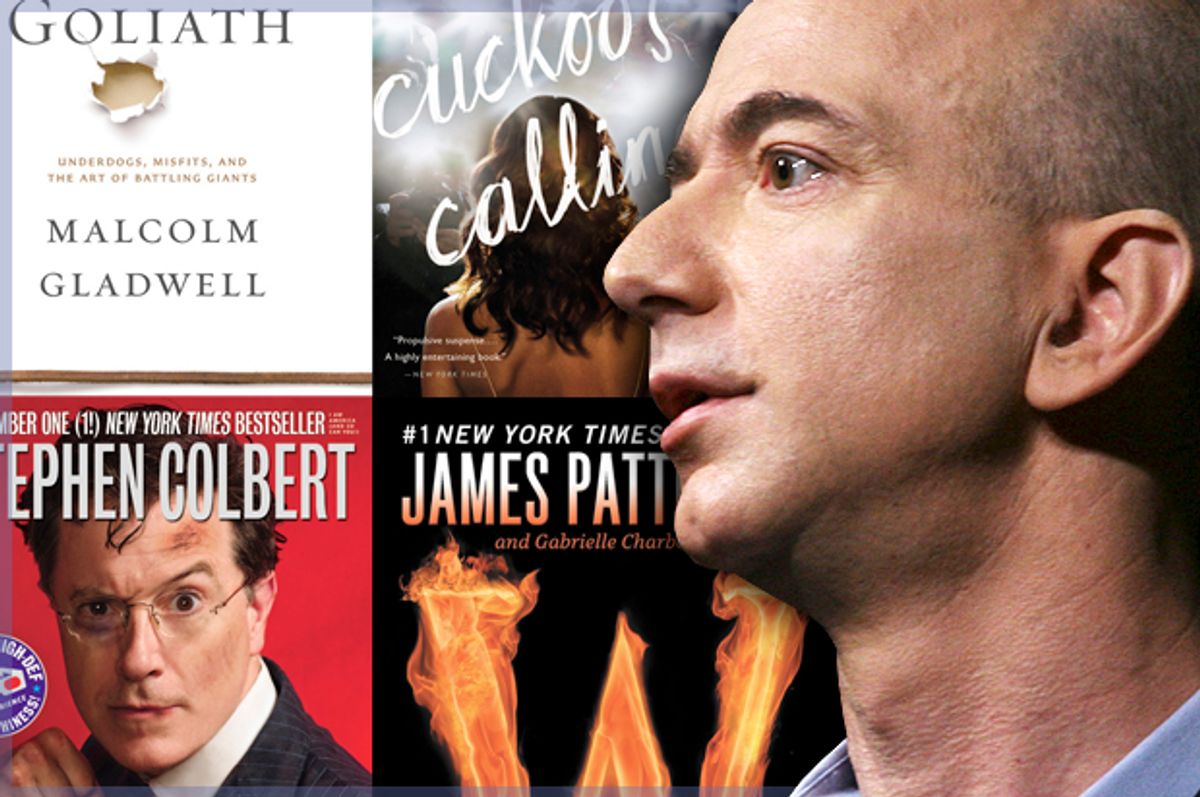 Anyone who has followed the coverage of the ongoing Amazon-Hachette dispute knows that some of the most impassioned voices on the pro-Amazon side of the argument come from self-published writers. It's easy to understand their impulse to defend Amazon's e-book publishing programs, given that many had tried in vain to publish their books with traditional houses before opting for, say, Kindle Direct Publishing.

One reason for the crossed wires here is that most self-published authors really, really, really hate traditional publishing, which has either rejected them or (in the case of authors who use Amazon to make their out-of-print titles available once more), let them down. The intense rage such experiences instill can lead to strange glitches in logic, such as the charge that it is publishers who have engaged in "monopolistic" practices because not everyone who wants to publish with a traditional house has succeeded in winning a contract.

"Big Pub basically runs its own monopoly over writers," a commenter on a New York Times article retorted, and I received an email about the Amazon-Hachette clash in which the writer complained of "the impossibility of a non-NYC writer just getting his foot in the door without sleeping with professors, visiting authors, publishers; without an M.F.A.; or without publications in major magazines (100 percent of which are supplied by agents). Talk about monopolistic!" [Note: The Big Five -- until recently the Big Six, but conglomeration is an ongoing reality when suppliers must negotiate with a single enormous retailer -- compete with each other for the books they want to publish. The fact that none of them want to publish a particular book is not proof that they are conspiring against the book's author, however frustrated the author may be by the experience.]

While neither Hachette nor Amazon is able to disclose the exact terms under negotiation, it's almost certain that one major issue is the price of Hachette's e-books. Traditional publishers have long fought Amazon's push to maintain a retail price for new e-books at around $10. Last year, a federal court in New York ruled that five houses, Hachette included, had illegally colluded to change all of their e-book sales arrangements to something called the agency model, which would allow them to control the prices at which their titles are sold. Publishers have long expressed concern that Amazon's willingness to sell e-books at a loss (that is, less than it pays for the e-books themselves) is aimed at lowering the perceived value of books in the public's mind.

A quick glance at the Kindle e-book bestseller list confirms that the price of a newly released e-book from a traditional publisher -- take, for example, Stephen King's "Mr. Mercedes," which is $11.99 -- is higher than a new release from a self-published author -- say, H.M Ward's "The Arrangement 15," only $3.99. Somewhere in the middle, at around $5 each, are titles from Amazon's own genre-fiction publishing imprints, by such authors as Heather Burch, Peter David and Max Allan Collins. (Presumably, these titles are charting because Amazon aggressively promotes its own list.) Even Donna Tartt's "The Goldfinch," a book that is nearly a year old, costs more than new releases of Amazon-published titles and, more still than the handful of self-published books on the Kindle bestseller list.

This suggests two things. One is that many readers remain willing to pay more for books by name-brand authors like King, James Patterson or the literary novelist Anthony Doerr, who squeaks in at No. 20 on the Kindle list.

The other is that even books by relatively unknown or unfamiliar authors have a shot at this bestseller list if the books themselves cost less than traditionally published titles. The early history of successful self-publishing in the Amazon system is largely a story of books whose bargain prices tempted readers to take a chance on something new. Even the science fiction novelist Hugh Howey, a talented writer who has made an established success of self-publishing, does not charge more than $5.99 for any of his titles, compared to the $9.99 a reader must pay for Andy Weir's bestselling "The Martian," published earlier this year.

That's why it's in the best interest of self-published authors that traditionally published books retain their higher prices. Five-plus years into the self-publishing boom, many readers express wariness about self-published books; overlooked gems do have a chance to find an audience in the self-pub realm, but an awful lot of unedited dreck has poured forth, too. More casual readers have been put off, but others have embraced the task of separating the wheat from the chaff. Essentially, this active readership for self-published books has agreed to go through America's slush pile, and they (rightly) expect that at least some of their labor should be subsidized by lower prices and the occasional e-book giveaway.

It helps to understand what's happening here if we all stop thinking about a traditional book publishing contract as a halo of literary worthiness bestowed upon an author by entities invested with a sacred, ineffable authority. Actually, it's a business deal. It signifies that a disinterested party (i.e., not your mom or spouse) believes enough in the book's potential appeal that it is willing to put its own money into the project. Publishers don't just supply professional services (editing, design, distribution, marketing); they are investors. Doesn't mean they're always right; publishers often aren't. But publishing a book is always a gamble of sorts, and a traditional publisher has ponied up.

From the perspective of many readers, this is a meaningful testimonial. Yes, self-published authors also believe passionately in their own work, but as we've all had a chance to learn by now, even really bad writers are convinced that they are good writers. An author's opinion of his own work is not much use. Self-published authors can hire freelance editors to comb their books for typos and grammatical mistakes, but when it comes to structural editing -- telling the author the third quarter of a novel is too windy or insisting that the current ending needs to be tossed out entirely and redone, things no writer likes to hear but some writers need to -- an editor-for-hire is much less motivated to displease her client even when demanding major rewrites would make for a better book.

This doesn't mean that good books can't come out of the self-publishing world, but readers expect a higher average standard from traditionally published books and are willing to pay for it. The proof of this is in Amazon's own bestseller list. As much as everyone likes to carp about the stinkers produced by the Big Five, the Kindle top sellers remain dominated by traditionally published e-books, despite their higher prices. Most readers are not willing to read dozens of sample chapters in order to find something acceptable or to rely on consumer reviews of questionable authenticity. The smaller population of readers who are willing to wade through the self-published chaff in search of those precious few grains of wheat quite reasonably expect that they should not have to pay premium prices for the privilege. It's a rough system, but it functions.

What would throw a spanner in the works, however, would be even lower prices on traditionally published e-books. At present, the author of, say, a self-published thriller available as an e-book for $5 or less does not have to compete with Janet Evanovich, Alafair Burke, David Baldacci and John Sandford on even ground; the big-name authors' books are typically twice as expensive. There are already more thrillers being cranked out by traditional presses than most people have time to read, and if those titles were all the same price as their self-published brethren, there would be much less incentive to try out the offerings from self-publishers. Self-published authors would feel pressure to reduce their prices even further.

While there's not much self-publishers can do to influence the outcome of the Hachette-Amazon dispute, this affair should serve as a cautionary tale about placing too much power in the hands of a single retail outlet. Amazon may seem like your best friend right now, but so it also seemed to traditional publishers when it appeared in the late 1990s, as a counterbalance to chain bookstores. A self-publisher is still a publisher and occasionally all publishers clash with the retailers who bring their wares to market.