From food trucks to makeup tips, Netflix's "Orange is the New Black" tie-ins are tastelessly missing the point 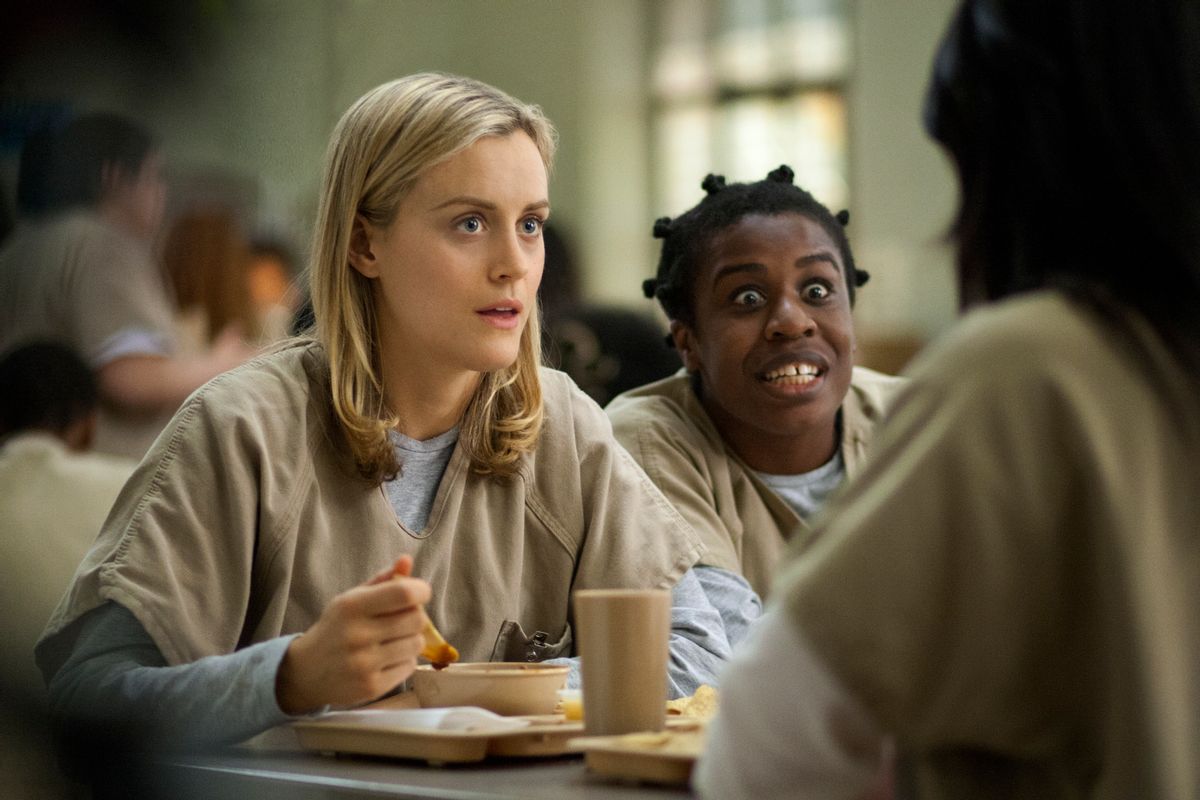 Not since "Downton Abbey" has there been a show as simultaneously popular and evidently marketable as Netflix's "Orange is the New Black" -- and no coincidence, since both series present easily relatable human situations in new and somewhat exotic settings.

"Orange is the New Black," from its sort-of-dated title on through the scenes of characters shooting the breeze, is full of jokes. But Crazy Eyes has been a character with a unique sort of pathos that this food truck flattens like a squirrel caught under its tires: Her name, which rhymes with "pies," is also a cruel appellation other prisoners gave an actually mentally ill person. That her relationship with Piper would be a "swirl" is precisely the point -- we learn early this season that her obsession with Piper is bound up in her never really getting the approval of her white adoptive family.

Netflix is quick to promote its show using the image of one of the most recognizable characters; anyone can relate. But making a complex and thought-provoking series, one that seeks to humanize those most marginalized by society, has its drawbacks, and one is that you're vulnerable to charges of poor taste when you turn characters' most central characteristics into wacky joke fodder. Or when you extrapolate from the fact that the prisoners have to scramble to get nourishment to tweet out joke recipes and then put out a cookbook. (Sure, sure, there was a "Sopranos" cookbook too, but it wasn't a central plot point of "The Sopranos" that kitchen employees had barely anything to prepare and could withhold food from you whenever they wanted.) And asked to make "Orange is the New Black"'s makeup artists available to explain how you could extrapolate fun beauty hacks for your real life from prisoners' routines, Netflix's press shop might have made a different choice.

The streaming service and the writers creating a program that airs there are operating at cross-purposes, or on different planets; it's a divergence between the intended outcome of a TV show and the takeaway bigger than any seen since white "Wire" viewers decided "Omar comin'" was a funny thing to say. "Orange is the New Black" is a comedy, but its depiction of the food and makeup in prison are meant to show viewers just how valuable their freedom is -- not how much fun it is to be able to try out the lifestyle that exists behind bars. Netflix is turning us all into Brooke Soso, the new inmate this season who thinks it'll be fun to try out prison with a weightless lack of understanding that real people (or people far more real than a goofy image on the side of a food truck) are trying to make their way there.

As for Crazy Eyes, she's been misinterpreted far more offensively in the past, and she'll be fine. But as the actress Uzo Aduba herself does in interviews, maybe we could call her by her given name, Suzanne, even though that doesn't rhyme with any baked goods.