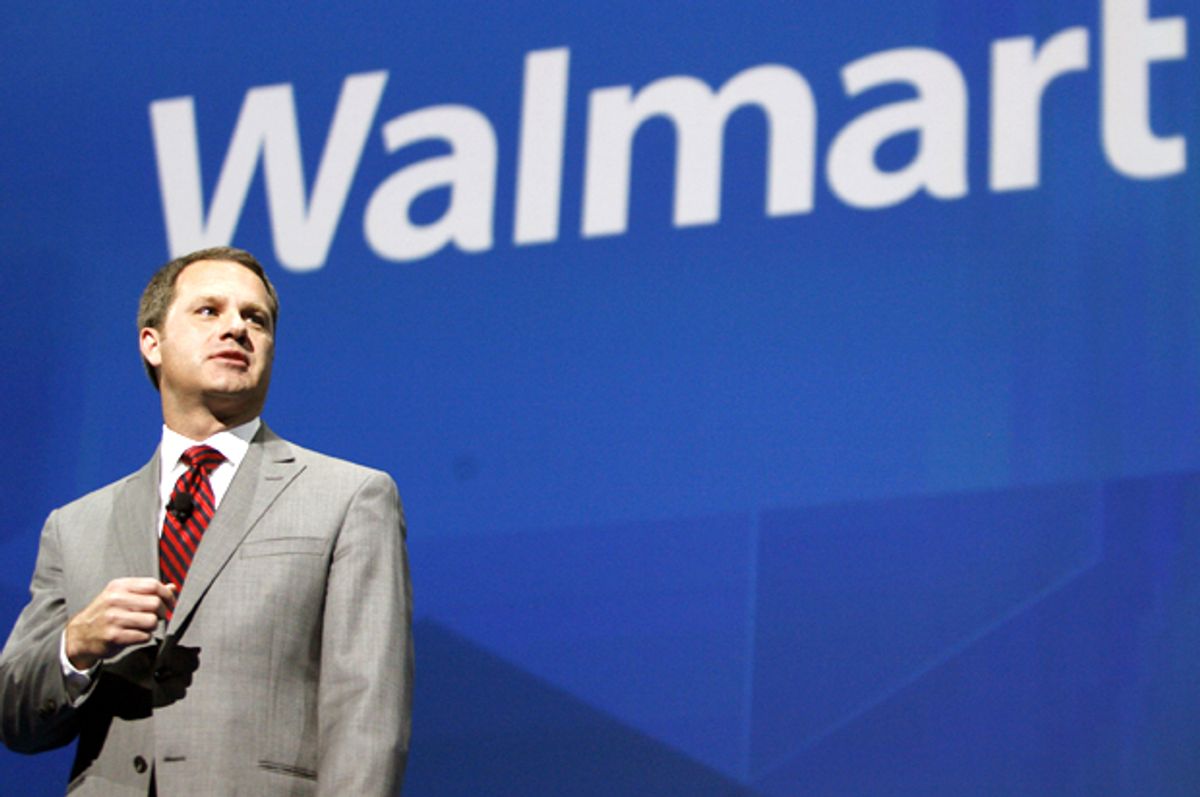 A little less than a week ago, multiple sources reported that Apple Inc. was once again in a very familiar position: playing defense after being accused of dodging taxes. In this instance, the accusers were from the EU's European Commission. But it wasn't so long ago that Apple CEO Tim Cook found himself fending off questions from U.S. senators of both parties, too.

Indeed, making excuses for tax dodging seems to have become a key part of any "super-manager" skill set. And for good reason — according to a recent study from the U.S. Public Interest Research Group Education Fund and Citizens for Tax Justice, more than 70 percent of Fortune 500 companies hide some of their earnings in offshore tax havens in order to avoid paying taxes. Titled "Offshore Shell Games 2014: The Use of Offshore Tax Havens by Fortune 500 Companies," the report shows how even when they're not technically breaking the law, major corporations like Apple, Wal-Mart, Starbucks and more are systematically flouting its spirit and keeping profits they earned as part of the American community all to themselves.

In order to better understand how these corporations skirt the law as well as how their tricks not only hurt the American economy but contribute to inequality itself, Salon called up one of the report's authors, Dan Smith. Our conversation is below and has been edited for clarity and length.

What's your report about and why does it matter?

This study is from the U.S. Public Interest Research Group Education Fund and Citizens for Tax Justice that shows just how skewed our tax system has become. We found that over 70 percent of Fortune 500 companies maintain subsidiaries in offshore tax havens like the Cayman Islands, and ... by using accounting tricks, many large companies are able to [hide] profits that were really based here in the U.S. [in] tax haven subsidiaries that are often nothing more than just a P.O. box in a place like the Cayman Islands.

One of the key points that we want to make with this [study] is that every dollar that big, multinational companies avoid in taxes has to be balanced by an average taxpayer or a small business owner paying higher taxes themselves; or [through] cuts to public programs, public services; or just coping with a higher deficit.

[Another point is that] the loopholes in our taxes that we talk about are legal — and that’s the problem. We think ... policymakers should fix the tax code [because current] incentives for these companies [are] to find every way to make it look like they’ve made their profits offshore to avoid taxes.

Despite the fact that a full 70 percent of Fortune 500 companies are doing this kind of tax dodging, were there any companies that you found were particularly aggressive in terms of exploiting loopholes in our tax code?

Yeah, Wal-Mart was one of the companies on that list. You have General Electric. You have tech companies like Apple and Microsoft. Pharmaceutical [companies] like Pfizer. And one of the ways that the tech and pharmaceutical companies are able to abuse these loopholes is [that] they’ll license the intellectual property to one of their tax haven subsidiaries and then when they make sales in the United States and make profits here, they have to pay royalties to the subsidiary that owns the rights to the product. And that’s something that pharmaceutical companies [and] high tech companies do a lot. It’s just a sham transaction. These companies ... make the product here, they benefit from our educated workforce, they benefit from having access to the largest consumer market in the world. But then, when it comes to telling the tax man, they say the profits were actually made offshore, not in the United States, and they [claim] don’t have to pay taxes on it.

How do your findings interact with the sort of perpetual push in D.C. to enact broad "tax reform"? It seems like that idea is dead now that the 2014 elections are coming up, but it's sort of a long-term goal of certain business interests and centrists; and I know that supporters of "tax reform" talk a lot about how corporate profits are "trapped" overseas.

Well, one of the things we point out in our report is some of [the] misleading language that a lot of these companies trying to influence tax reform use. So I want to point out a few things. One: When you talk about profits [trapped] offshore — the point we make is they’re not necessarily profits that are made because the company is doing business offshore. It’s because they made the profit [in the U.S.] but then, with the help of armies of lawyers, make it look like the profits were made offshore. The second point is: There’s this notion that all of these profits are "trapped offshore" and if we could only bring the money back, then it could be invested in the economy. That’s also misleading, because there’s evidence ... that a lot of these profits are actually onshore, sitting in U.S. bank accounts or invested in U.S. treasury bonds. So say a company has a subsidiary in Bermuda [and] that subsidiary opens an account in a U.S. bank, because it doesn’t want to hold all that cash in foreign currency, it wants it in U.S. dollars. So it opens an account. The money is really here in the United States ... it’s just not being taxed. So when you hear a lot about "Well, all we have to do is lower the corporate tax rate and then the profits will be brought back ... the point we make is that, if you’re allowed through these loopholes that let companies pay zero percent in a tax haven like the Cayman Islands, they’re always gonna take the tax-free deal over anything else. So, no matter what the corporate tax rate is, zero’s always gonna be better [to them].

So besides the easiest answer — close the loopholes — what are some concrete things policymakers can do if they want to combat these corporations' tricks?

There are very clear solutions to this. The first one I’ll say right now [is that] companies are able to [defer] paying taxes on the profits they claim were earned offshore until they "bring the money back" and officially declare that it’s back in the United States, even though it often never left in the first place. If you just end deferral and say, "Companies can no longer put off paying taxes on the profits that they declare are ... abroad," that would end the biggest incentive companies have to shift profits offshore.

You can also kind of go after some of the specific tricks that companies use — like selling the rights to a product you’re going to release soon to a subsidiary in a tax haven and then being able to just pay that subsidiary all the royalties for it. You can go after, you know, those very specific abuses.

The third thing I’d say is [that] we need transparency. Something that our report talks about is how not every company even discloses subsidiaries they have in tax havens. Not every company discloses how much cash they have booked off-shore. Very few companies disclose what they’d have to pay in taxes if their profits weren’t offshore. Basically, no companies actually disclose each country where they’re making money and paying taxes to. We think companies should just have to report, where are they actually doing business? Where do they have employees? Where do they have sales? And where are they paying their taxes? If we had that kind of disclosure, it would just be abundantly clear what companies are gaming the system. When you see things like, "Oh, you say you have this much in profits in Bermuda, but you don’t have any employees and you’ve barely done any sales there," that would give folks a clue that there’s something fishy going on there.

Talking about these very large sums of money currently being held "overseas," I'm reminded of the austerity push and deficit hysteria that consumed a big chunk of Obama's first term. The standard line for those folks was something like, "We're broke!" The idea was the U.S. simply doesn't have money to reallocate and cuts were the only way to balance the books. But it sounds like there's actually quite a bit of money out there that we could be reinvesting.

The estimates are that we lose $90 billion every single year from corporations pretending they made money in offshore tax havens to avoid taxes. That is a lot of money; that’s almost $1 trillion over 10 years, and I think anyone would agree that that’s about the worst use of the money, sitting on the books in Bermuda when it could be used to invest in public transportation or used to reduce the deficit.

OK, so are there any politicians in D.C. right now who you feel get this? Or are they all too beholden to fundraising pressures?

You know, when the CEO of Apple was brought before the Senate committee, you heard both John McCain and Carl Levin taking him to task for Apple's setting up this crazy network of shell companies and avoiding billions of dollars in taxes. So I think that there are solutions out there in Congress; and over time this problem is just going to get impossible to ignore [because] money booked offshore is only increasing. Between 2008 and 2013, the amount of money companies booked offshore doubled.

How about the White House — how is Obama on this issue?

The president, in his budget, has laid out some great policies that would close the most egregious loopholes ... He’s laid out an overall outline of the comprehensive corporate tax reform plan that has a lot [to recommend it] if done right. But the details of how it actually works matter a lot, so I’d say there aren’t enough details yet to really know how much [Obama's proposal] of comprehensive reform would address tax haven abuse.

Lastly, how do you think this process interacts with rising economic inequality in general?

The way these loopholes work is just the quintessential example of what happens when a few special interests are able to get the laws written in their favor. When you talk about inequality, think about the average person, filing their taxes every year; or a main street small business owner, filing his or her taxes. They don’t have armies of tax lawyers to figure out how to use these loopholes. They don’t have money that they can just book offshore through a Cayman Island subsidiary. So they end up footing the bill for [corporate tax-dodging] that just doesn’t make any sense. It’s not fair. There shouldn’t be companies like GE or like Microsoft or like Pfizer that say, "We’re going to locate [in the U.S.]; we’re going to benefit from what makes America a good place to do business but when it comes to paying taxes, everyone else has to do that." That’s essentially what’s happening now.