How the Koch brothers stole Ohio 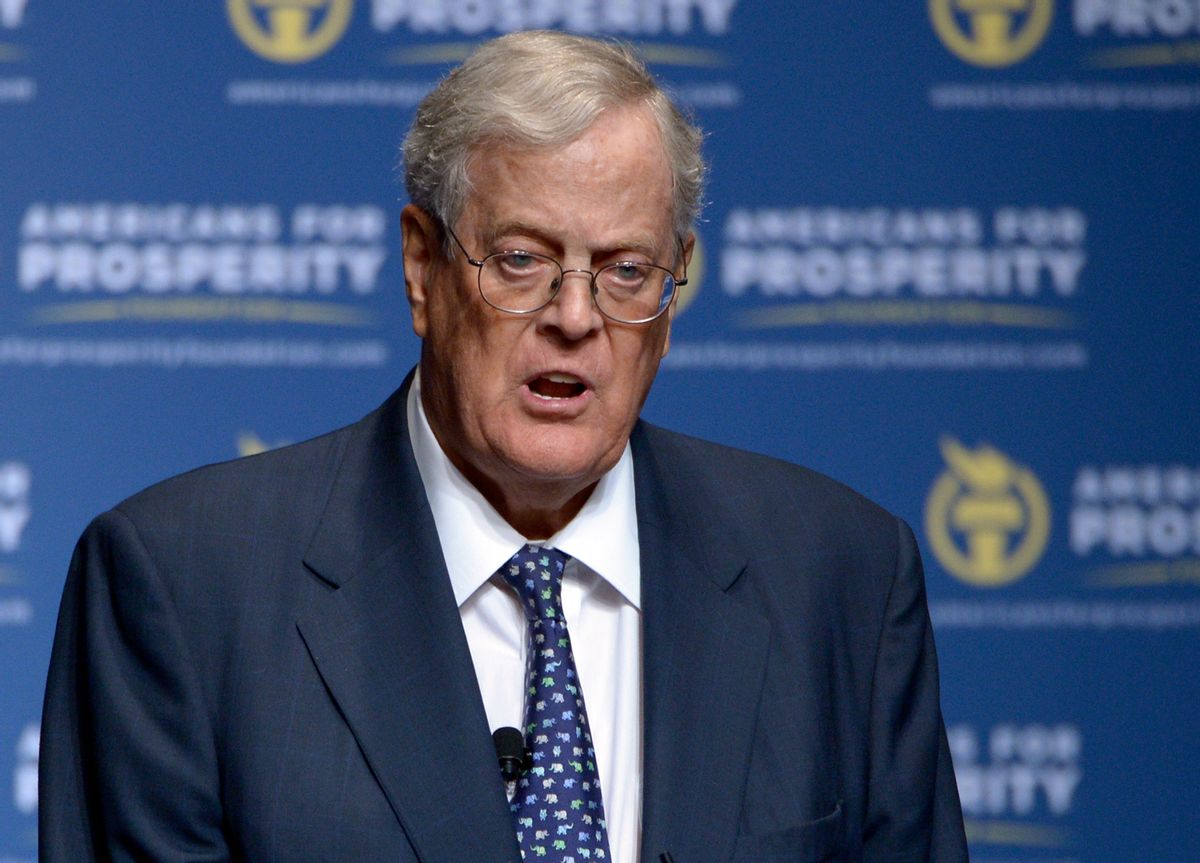 Renewable energy took a major hit in Ohio last week. Republican Gov. John Kasich signed into law Senate Bill 310, freezing the state's renewable energy mandate for the next two years. The mandate, first implemented in 2008, requires the state's utilities to incrementally add renewables to their energy mix -- 1 percent every year until 2025, when wind, solar, hydro and biomass sources would eventually comprise 12.5 percent of total power. By making reductions on the demand side, the state aimed to achieve "25% by 2025." It was a proposal that, at the time, had bipartisan backing, and managed to pass nearly unanimously.

My, how times change. The backlash from the state's coal-heavy utilities has arrived, says Ed FitzGerald, Kasich's Democratic opponent, and it's been helped along by national interests that are using the state as a "lab rat" for their anti-green energy campaigns. Another 29 states and the District of Columbia have passed similar mandates; Kansas' recently managed to survive a similar attack.

Kasich, who contends that the renewable energy standards “are simply unrealistic and will drive up energy costs for job creators and consumers," defended the move to reporters Monday, saying the state had "hit the right solution."

"I believe in the wind and solar," he said. "I believe in energy efficiency. We just have to have targets that are realistic."

FitzGerald, who's currently serving as the Cuyahoga County executive, makes no secret of the fact that he plans to make the rollbacks a major campaign issue, telling HuffPost's Kate Sheppard that the reversal on renewables is "a very big deal." Far from being a typical environmental issue, FitzGerald contends, some of the state's biggest manufacturers came out in support of the mandates because of their promised economic benefits. And while the freeze is only temporary, the opposition's ultimate goal, he's convinced, is to eliminate them entirely.

And so far, FitzGerald told Salon, the plan is working. A lightly edited version of our conversation follows:

Let's go back to 2008, when the mandates were first passed. It seemed like there was a real bipartisan consensus that they were a good thing. Do you have any insight to what the thinking was back then?

There was a bipartisan consensus. I think there were one or two votes against the bill in the entire Legislature. Now, at that time, our House of Representatives was controlled by Democrats, but the Senate was Republican. There were a significant number of Republicans in the House and the vast majority of them voted for it. Policy makers of the time just thought it made sense. It would be good for the environment, it would lessen our reliance on traditional fossil fuels, it would place Ohio at the front of the line of this emerging part of the energy sector and it would be well-suited to our manufacturing capacity in this state. Ohio has a very long tradition of advanced manufacturing and the thought was that not only could we start providing some of our energy this way for ourselves, but then also we could become the leader in the country in terms of producing solar panels and wind turbines and things of that nature.

So those were kind of the founding principles of why we went in this direction in the first place. And there has been nothing but evidence that it’s worked. The estimate is that there are about 25,000 jobs that are linked to the industry as a whole. And all those are somewhat at risk. There are thousands of jobs that were kind of on the drawing board that are definitely in limbo now.

So what do you think changed?

The utilities that have a lot of political influence in the state were never in favor of this, but their criticism at first was kind of muted. Behind the scenes they had a long-term strategy to kill these standards before they really started taking effect -- because the 25 percent standard was being phased in, as you know, very methodically and very conservatively over time. They said, "We have a few years before these things really start taking a serious bite into our profit formula." And they did it: They started lobbying behind the scenes and laying the groundwork for it. There had been a couple of other attempts to kill the renewable energy standards outright and those failed, but they picked up a lot of steam, so the writing was on the wall that they had some significant support.

And then they came up with this kind of … I would just call it kind of a political fiction where they said, “We’re not going to get rid of these standards, we’re just going to freeze them,” which basically stops all the progress here. That provided enough political cover for people. Well, they’re being frozen at incredibly low levels, and I’m sure the long-term plan is stick them at that level and eventually eliminate them entirely. It’s pretty clear that was the strategy.

Once the mandates are frozen, the downsides becomes apparent: If people do start losing the jobs that have been created already, do you think there's a chance that people will recognize that this was a bad idea?

There is a real backlash about this and, again, if you just look at it from a kind of political science perspective or something, this isn’t the typical "industry vs. environmentalist" that we see so often when it comes to environmental policies. There is a very active and robust coalition that includes a lot of people from the private sector and some of the biggest manufacturing entities in the state [that are in favor of the mandates]. So they have a very strong case to be made.

I haven’t seen any polling particularly on Senate Bill 310. And it’s pretty complicated, but in general if you ask Ohio voters if they’re in favor of the mandates, they’ll say overwhelmingly that they are. The number I saw was over 70 percent. I think as those anecdotes start to filter out to the community about the economic fallout, there is a chance that we may be able to reverse this.

There have been some arguments that the mandates as they stand aren’t perfect — they could  perhaps use some reform or refining -- but that the real issue here is just that this became such a partisan issue that Ohio wasn’t able to have a real debate about their benefits and drawbacks. Are you 100 percent in support of the mandates or are you just opposed to the way the whole situation was handled?

I was supportive of the mandates. I mean, this was not — I want to be clear about this — this was not an attempt to tweak the mandates or just alter the formula. Those that were in favor of them were open to having that kind of discussion. That wasn’t what this discussion was about. There were previous attempts to basically junk them entirely and it was the same folks who worked for this. I think that’s pretty disingenuous. I think that’s what’s going on is they recognized that this is a popular enough issue with people that if they just came out and said, “Let’s get rid of it,” that would’ve been too heavy of a political lift. They’re really playing games, just playing word games, by saying it’s a freeze. It was not a good, safe effort to try to reach some kind of compromise about the way these things should be implemented. There was even an offer by some of the manufacturing companies to say, “OK, we don’t agree with the freeze, but let’s do it for one year so that we don’t scare off our investors,” and they wouldn’t even agree to that. They wouldn’t even agree to that because they knew that two years would give them enough time to, I think, really kill the standards off entirely. I don’t think there’s any indication that this was truly an attempt to really reach a workable compromise or something of that nature. This was an attempt to kill it and it, for the time being, has succeeded.

Do you have any conception of what this will mean for Ohio’s implementation of the EPA’s new power plant rules? Will the rollbacks make it harder to reach those goals?

I think so. That’s going to be a very complicated kind of equation. It certainly is going -- it’s not consistent with that. But that’s going to be tough to measure. We certainly are taking incentive out of the equation that I think would make it easier for Ohio industry to make that transition. The federal rules are going to be what they’re going to be and we’re going to have to live with them. We just took away, I think, some of the infrastructure that could’ve supported that.

Obviously, a lot of this for you is about the economy and about encouraging the investment in renewables. But another big focus of the midterm elections, for some people, is going to be climate change -- Tom Steyer, for example, is focusing a lot of money on defeating politicians in the midterm elections who are anti-climate, but Kasich isn't one of them. Should the environmental community be paying more attention to the climate aspect of the rollbacks?

I think there was a real effort to target Ohio from those that are not supportive of these kind of sustainable policies. I think we’re seeing the fruits of that. Mr. Steyer doesn’t have unlimited resources. He’ll have to make a decision on where he thinks he can make a strategic difference. I did think it was interesting that the Koch brothers came out in favor of this freeze and I thought that it was interesting that Gov. Kasich’s finance report, that we had a file of last Friday, showed David Koch personally contributed to his campaign the maximum amount you’re allowed to under Ohio law, so there’s definitely some national ramifications going on here.

Do you see other anti-climate, anti-renewable energy campaigns taking hold in Ohio?

I think that we’re being used a little bit as a lab rat. So I wouldn’t be surprised. Again, this is the second time we’ve seen the Koch brothers actually kind of interfere in Ohio politics. They made a major financial contribution to kill a local levy for, believe it or not, the Columbus Zoo. I think that in some ways, because Ohio is such a bellwether state, it’s used as a testing ground for these attempts by the right wing. So, I hope not, because, again, I think when the standards passed in 2008, that did not happen because a bunch of national interest groups that wanted us to do that came out. That kind of came organically out of Ohio. That’s not what we’re seeing here.