The shocking numbers: Americans are dangerously ignorant on politics 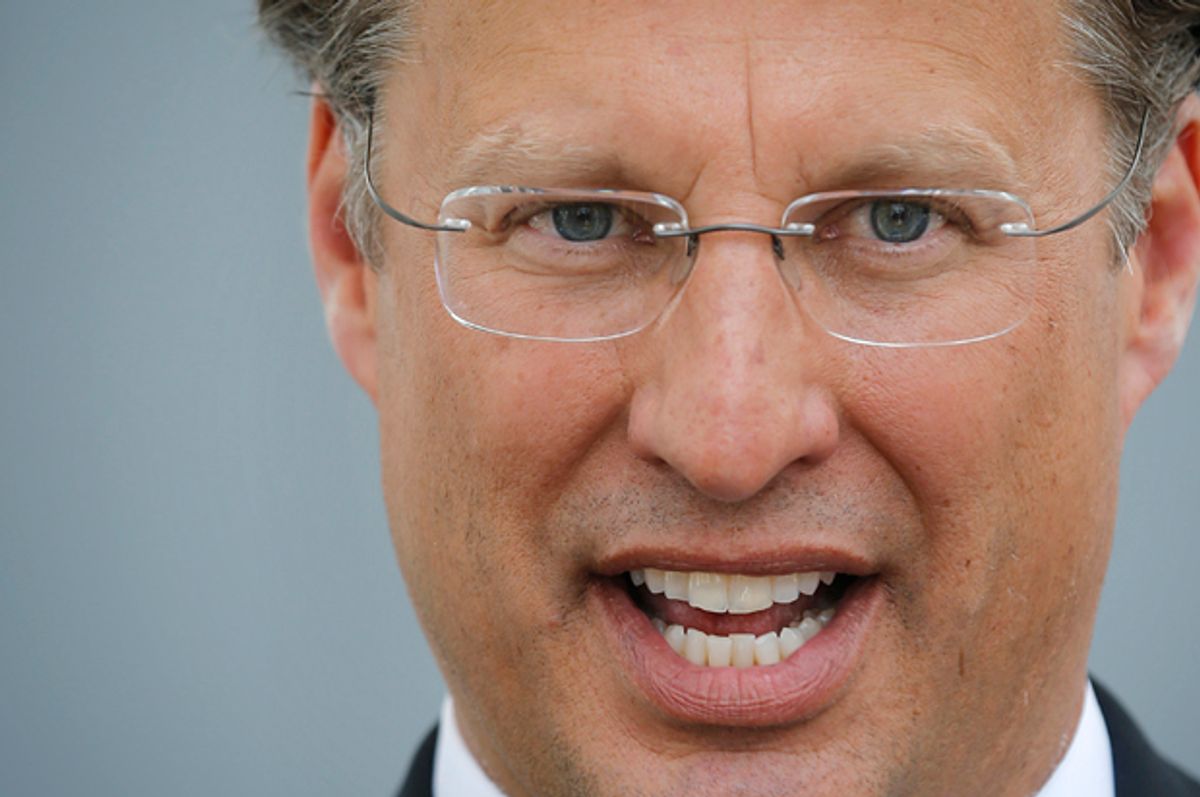 The health of a democracy is dependent on an educated citizenry.  Political illiteracy is the manure for the flourishing of political appeals based on sheer ignorance.

So let me introduce you to House Majority Speaker Eric Cantor’s Republican Party vanquisher David Brat (R-VI). First thing you need to know about this far right-wing political upstart is he’s a university professor, which means it’s highly probable he’s not an idiot. He also identifies with the Tea Party strain of conservatism, which, paradoxically, means it’s likely he is, indeed, an idiot. And by idiot, I mean wholly ignorant of U.S. history and constitutionality.

In fact, in his victory speech delivered last week to his supporters, Brat demonstrated that he sits among the majority of Americans when it comes to political and cultural illiteracy.

“I wish to restore America to its Judeo-Christian roots,” declared Brat. "God acted through people on my behalf.”

Ignoring the self-delusion of the latter part of the above text, Brat now joins no less than 200 million Americans, according to a number of polls, who believe the U.S. Constitution and our laws are based on Judeo-Christian values. On any given Sunday you will hear Christian-right politicians claim absurdly that U.S. laws are based on the Bible. Spoiler alert: they’re dead wrong. The Constitution’s secular provisions came into being thanks to the Founding Fathers, who shared a deep suspicion of both organized religion and the supernatural. The Constitution was framed with a conscious omission of any mention of God and a prohibition of all religious tests for public office. Moreover, the First Amendment’s declaration that “Congress shall make no law respecting an establishment of religion” embodied the founders’ view that religion has no place in the political domain.

“Every shortcoming of American governance is related in some fashion to the knowledge deficit of the public – if only because there is no widespread indignation at policies shaped by elected officials who suffer from the same intellectual blind spots as their constituents,” observed Susan Jacoby, author of The Age of American Unreason.

The nation’s collective ignorance as it pertains to cultural and civic literacy paves the way for extremist politicians to convince the public of the validity of extreme positions.

So how bad is America’s political literacy?

A 2007 National Constitutional Center poll found that two-thirds of Americans couldn’t name all three branches of the U.S. federal government, nor a single Supreme Court justice. Another poll found that 91 percent couldn’t name the current Chief Justice, which is staggering considering the number of high profile, politically polarizing cases deliberated upon by the nation’s highest court in recent years – including the rulings on the Affordable Care Act, same-sex marriage and campaign finance laws.

It gets worse. When respondents were asked whether they could recall any of the rights guaranteed by the First Amendment, a majority could name only free speech. More than a third were unable to list any First Amendment rights. The National Constitution Center also found that 42 percent of Americans think the Constitution explicitly states that “the first language of the United States is English;” and 25 percent believe Christianity was established in the Constitution as the official government religion.

Only 40 percent of adults know that there are 100 Senators in the U.S. Congress, while a great majority of Americans have no idea of when or by whom the Constitution was written. A 2010 Pew Research Center  survey of American’s knowledge of public affairs and politics revealed that political literacy has been in rapid and continual descent since high water mark of the 1950s. While one may be forgiven for not understanding all the quirky procedural rules of the U.S. Senate, one should be suitably embarrassed if one cannot at least correctly identify the number of votes needed to end a filibuster, but on that – more than two-thirds of Americans do not know the answer is 60.

This rising tide of ignorance threatens the very foundation of American democracy. Bertolt Brecht, the 20th century German playwright and poet, wrote, “The worst illiterate is the political illiterate, he doesn’t hear, doesn’t speak, nor participates in the political events. He doesn’t know the cost of life, the price of the bean, of the fish, of the flour, of the rent, of the shoes and of the medicine, all depends on political decisions. The political illiterate is so stupid that he is proud and swells his chest saying that he hates politics. The imbecile doesn’t know that, from his political ignorance is born the prostitute, the abandoned child, and the worst thieves of all, the bad politician, corrupted and flunky of the national and multinational companies.”

An embrace of infantile emotionalism has supplanted political literacy. Henry Giroux, author of Zombie Politics and Culture in the Age of Casino Capitalism, writes:

It [infantile emotionalism] is perfectly suited for emptying the language of public life of all substantive content, reduced in the end to a playground for hawking commodities, promoting celebrity culture and enacting the spectacle of right-wing fantasies fueled by the fear that the public sphere as an exclusive club for white male Christians is in danger of collapsing. For some critics, those who carry guns to rallies or claim Obama is a Muslim and not a bona fide citizen of the United States are simply representative of an extremist fringe, that gets far more publicity from the mainstream media than they deserve. Of course this is understandable, given that the media’s desire for balance and objective news is not just disingenuous but relinquishes any sense of ethical responsibility by failing to make a distinction between an informed argument and an unsubstantiated opinion.

There are a great number of reasons for the decline in American political literacy. One that cannot be overlooked is the absence of national standards, which is why American children know so much less about their history than European children know about the history of their native lands. Another is the collapse of journalistic standards.

Giroux writes: “The United States is a country that is increasingly defined by a civic deficit, a chronic and deadly form of civic illiteracy that points to the failure of both its educational system and the growing ability of anti-democratic forces to use the educational force of the culture to promote the new illiteracy. As this widespread illiteracy has come to dominate American culture, we have moved from a culture of questioning to a culture of shouting and in doing so have restaged politics and power in both unproductive and anti-democratic ways,”

In other words, when Republicans say there is no such thing as gravity, and Democrats reply that gravity is real, CNN and the like say, “Look, Democrats and Republicans are fighting again,” which not only exacerbates the nation’s anti-intellectualism and anti-rationalism, but also increases the likelihood of extremist views and falsehoods taking hold in the national electorate.