Go away, Dick Cheney: An old man and the “liberation” he unleashed 11 years ago

It’s not just that we should ignore him. We must now focus on everything he wants to distract us from 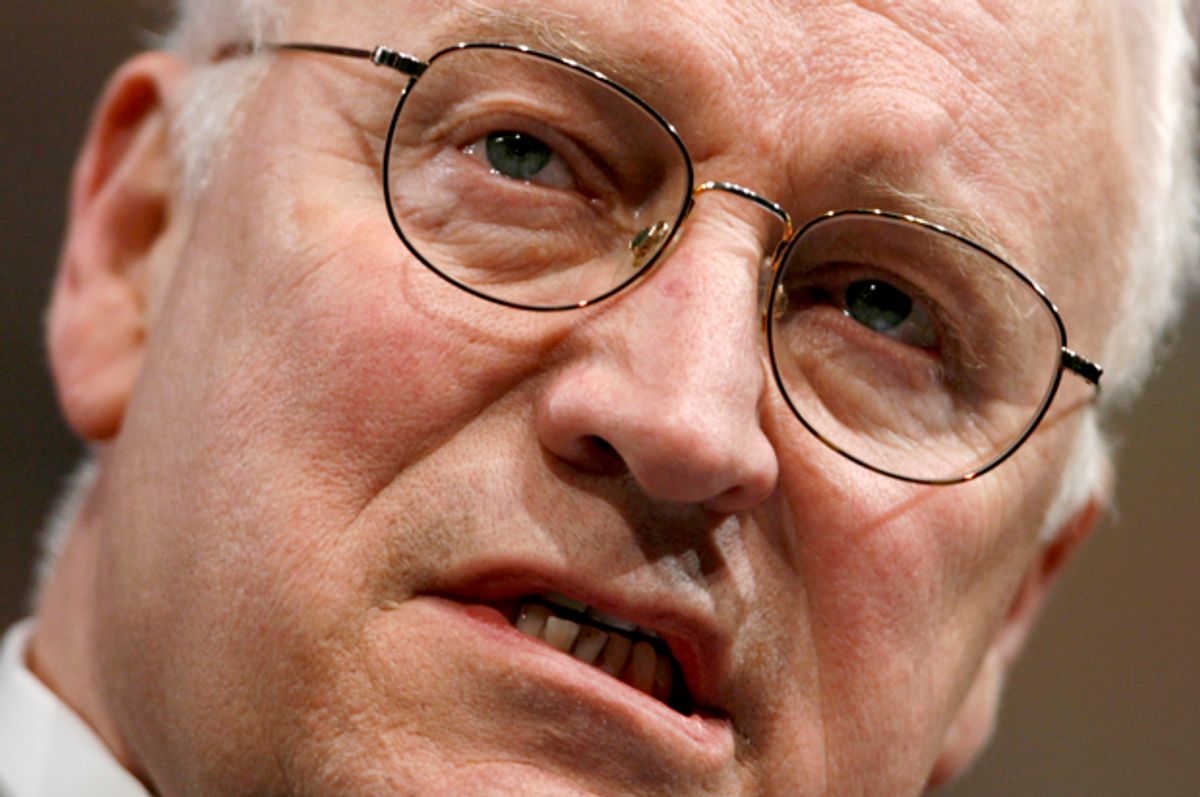 “Rarely has a U.S. president been so wrong about so much at the expense of so many,” Dick Cheney and his daughter Liz wrote in an Op-Ed for the Wall Street Journal Tuesday.

In a creepy and bizarre YouTube video, the pair repeated much the same thing.

Twelve years ago, Cheney assured the Veterans of Foreign Wars that, “Simply stated, there is no doubt that Saddam Hussein now has weapons of mass destruction.” Being wrong about Saddam’s WMD led to the loss of thousands of American lives, hundreds of thousands of Iraqi lives and $2 trillion in wasted funds.

In his speech to the VFW in 2002, Cheney went on to dispute the warnings that, “opposing Saddam Hussein would cause even greater troubles in that part of the world, and interfere with the larger war against terror.”

Overthrowing Saddam would liberate the freedom-loving people in the Middle East to pursue peace, Cheney countered. “When the gravest of threats are eliminated, the freedom-loving peoples of the region will have a chance to promote the values that can bring lasting peace.” As for Islamic extremists, they “would have to rethink their strategy of Jihad.”

ISIS, the Islamic extremist group overrunning parts of Iraq – which Cheney blames on President Obama – seems quite committed to jihad, and it is working well for them so far.

Admittedly, Cheney was not (nominally, at least) president when he launched the campaign to invade with that speech to the VFW in 2002. But that speech, and many of the others Cheney gave in the subsequent months, laid out the doctrine of regime change that would create the weak state that ISIS now seeks to overthrow.

According to Cheney’s 2002 logic, overthrowing Saddam Hussein in the name of destroying his nonexistent WMD was certain to prevent precisely what is currently happening in Iraq.

Cheney was so wrong.

And yet, perhaps to preempt discussions of how wrong he turned out to be, Cheney has the audacity to blame Barack Obama, and accuse him of lying.

I am far from the only one focused on rebutting the unbelievable gall of Cheney and other architects of the Iraq disaster. In Salon yesterday, Simon Maloy warned  against listening to all the people who got Iraq wrong. And James Fallows, like me, recalled Cheney’s VFW speech after reading his most recent screed.

Ultimately, however, we should also focus on the things Cheney tries to distract from.

We should not just ignore Dick Cheney and Paul Wolfowitz and Judy Miller and David Frum and Paul Bremer. But we’d be better served to listen to Paul Pillar, who in 2006 unpacked some of the reasons Cheney got Iraq so wrong. We’d be well served to listen to Juan Cole, too, whom the Bush White House reportedly tried to discredit in 2005.

Both men warn against overestimating American interests in Iraq.

And we should note whose interests Cheney represents.

Clearly, his temper tantrum serves, in part, to distract from his own culpability.

But note who else’s views Cheney cites? He claims he heard “a constant refrain in capitals from the Persian Gulf to Israel,” complaining about Obama’s actions. He describes a senior official in an Arab capital laying out ISIS’ aspirations on a map. He portrays those same figures in the Middle East demanding, "Why is he abandoning your friends?" "Why is he doing deals with your enemies?"

Even while Cheney parrots the interests of Middle Eastern leaders and conflates their interests with America’s, he scoffs at Obama’s (belated) efforts to address a far more immediate risk for America, climate change. “Iraq is at risk of falling to a radical Islamic terror group and Mr. Obama is talking climate change,” Cheney complains.

ISIS may be overrunning Iraqi cities, but extreme weather events are endangering cities in the United States and across the world. Much of the American West is struggling with extreme drought. Cheney, however, would have the president ignore this threat and instead prioritize the concerns he heard from his friends in the Middle East.

Cheney’s disaster distracted us for a decade from the urgent matters facing the U.S. His errors emptied our coffers, making us far less able to respond to threats affecting our own interests.

Yet he demands we once again heed his judgment about where our interests lie. Or perhaps substitute his interests for the real interests of America.