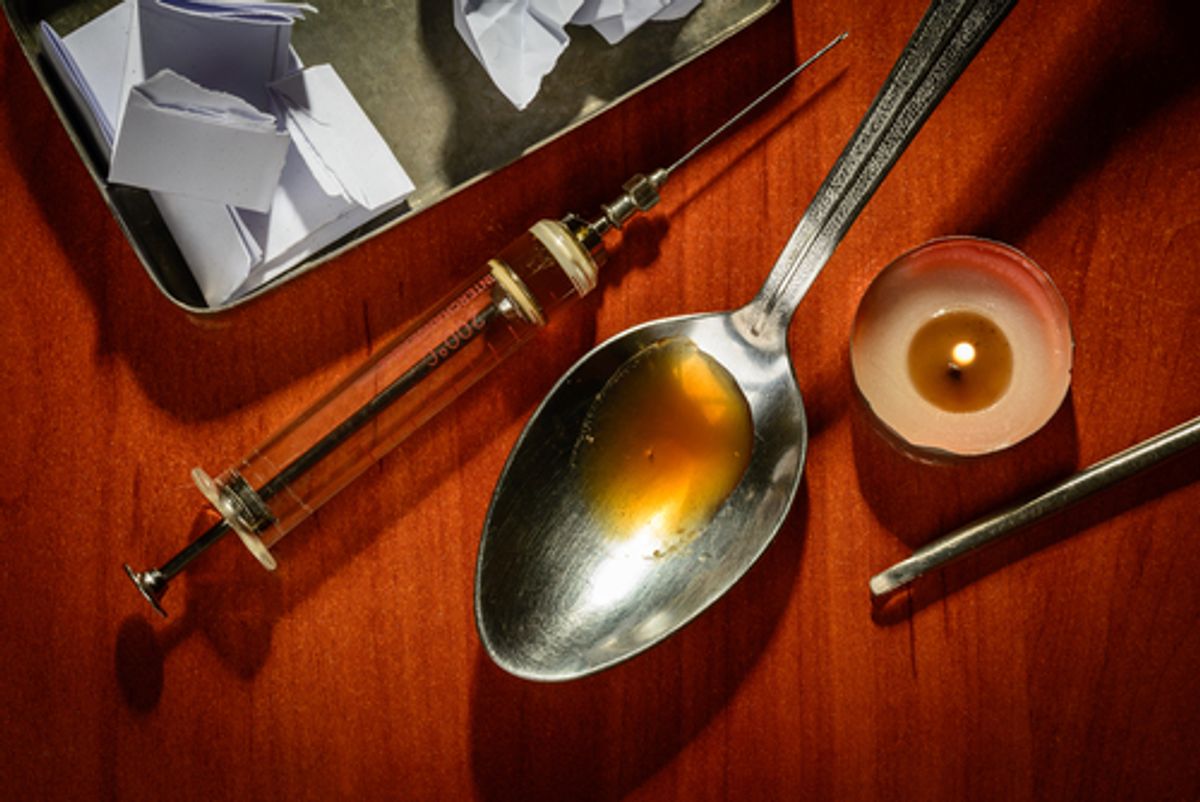 OMG! Heroin is now hitting the middle class. According to NBC News, the “New Face of Heroin Is Young, White and Suburban.” ABC News found “Heroin in Suburbia.” The Daily News headlined its story, on a new study of the demographics, “Heroin’s New Users Are Now the Suburban Kid Next Door.” Fox weighed in with “Face of Heroin Now Young, White and Suburban.” Search Google News for “new + face + heroin,” and you get 35,800 results in the past month alone.

This white, middle-class former heroin addict of the 1980s is outraged—outraged, I tell you. But what I’m furious about is not the supposed new class of heroin users. It’s that the media still assumes that the face of American addiction is poor and black—and that heroin ever went away.

While there certainly has been an increase in overdose deaths and opioid addiction in recent years, the white American middle class has been involved with this class of narcotics for more than a century.

According to the major government survey on the issue, “Monitoring the Future,” the percentage of the population that takes heroin doesn’t vary all that much over time. For example, between 1975 and 2012, the proportion of high school seniors who took heroin in the past month has never measured more than 0.1%; the proportion who take it daily has never even been high enough to measure accurately. Prevalence of past month heroin use by adults aged 19 to 28—the group most likely to take any drug—is 0.2%.

Consequently, until we stop viewing addiction through a scrim of racism, we won’t be able to recognize the real issues and treat addicted people—whatever their race and class—effectively.

To illustrate, try and guess the date of these New York Times headlines:

*“Addiction Among Middle Class and Wealthy Found on the Rise”

*“The Scourge of Youth: Use of Heroin by Students Is Called Deadliest Fad Ever to Hit Campuses”

Granted, the last one has dated language, so it’s clearly not current. That one included, the linked stories are from 2003, 1999, 1982, 1969 and 1970, respectively. And every single one—going back nearly 50 years—implies or states explicitly that Times readers share the paper’s assumption that heroin addiction is a problem of the inner-city poor.

This is despite hundreds of pop culture artifacts that document heroin use as a white middle- and upper-class experience, including such classics as William S. Burrough’s novel Junkie (1953), Allen Ginsberg’s poem “Howl” (1955), Lou Reed’s song “Heroin” (1967), Gus Van Sant’s film Drugstore Cowboy (1989, based on a memoir about a 1971 gang of white opioid addicts who rob pharmacies), and, in the 1990s, Kurt Cobain’s heroin addiction and the “heroin chic” fashion.

In fact, the study that prompted this most recent outbreak of media coverage doesn’t even show quite what the “New Face of Heroin” headlines suggest. Published in JAMA Psychiatry, it included nearly 3,000 people who had been treated for heroin problems, with addictions started in decades ranging from the 1960s to the 2010s.

From the earliest time studied, however, around half of the heroin-addicted folks were white. As far back as the 1970s, the heroin-addicted population had a white majority—and in every decade since then, white heroin addicts have outnumbered blacks. Although, because blacks are a minority in the population, they are somewhat over-represented in most of the late 20th century.

Nonetheless, from the 1980s onward, the typical heroin addict was not black. And in the most recent group, blacks are actually under-represented. African Americans make up around 12% of the population—but in the 2010s, 90% of heroin addicts are white.

So why is today’s media hyperventilating about heroin breaking free from the ghetto, when that had already happened back in Ronald Reagan’s era? And when is the media going to stop rewriting the same story Newsweek first ran in 1981 about the new “Middle-Class Junkies”?

This will only happen if we examine why we’re so keen to see white middle-class addicts as “not typical.” The reason is both simple and sad. Our drug laws are not designed to fight addiction or drug-related harm: They are driven by racism. America’s first cocaine laws were passed in Southern states concerned that “Negro Cocaine Fiends” would rape white women; our first opium laws come from California, where the worry was that Chinese railroad workers would use it to seduce or rape white women.

National marijuana prohibition? That derives from arguments by the first head of the Federal Bureau of Narcotics, Harry Anslinger, who said in 1937, “This marijuana smoking by white women makes them want to seek sexual relations with Negroes, entertainers and others.” Even Prohibition (1920 to 1933) involved racism—its proponents actually had to distance themselves from the violence of their supporters in the Ku Klux Klan. Most of the arguments in favor of outlawing alcohol, however, were based on alcohol’s supposed links to German and Irish immigrants.

But as a result of this history, both our concepts of addiction and our laws aimed at dealing with it originated at the height of the Jim Crow era, and our stereotypes of addicted people are nearly identical to the most vile racist portrayals of black people. Addicted people are supposed to be lazy, shiftless, dishonest, promiscuous, criminal and violent—therefore, such people can’t “typically” be white and middle class.

Our stereotypes of addicted people are nearly identical to the most vile racist portrayals of black people: lazy, shiftless, dishonest, promiscuous, criminal and violent. Therefore, such people can’t “typically” be white and middle class.

This creates media tropes about “epidemics” of addiction “spreading” from the ghetto (where, it is implied, it belongs) to white middle-class teenagers—and completely distorts the nature of the problem.

It suggests that law enforcement can confine it, that drugs alone cause the problem and that limiting supply is effective or can be achieved without, say, shifting opiate-addicted people from one illegal substance to another.

It suggests that criminal behavior is inevitably part of addiction, when, for the most part, this link rests on which drugs are stigmatized and therefore prohibited and expensive. And that classification is determined not by scientific evaluation of which drugs are most harmful, but by the racial fears that drive prohibition laws. Cigarettes, for example, are the most harmful drug known to humanity—causing the death of 50% of users—and they are perfectly legal.

In reality, addiction starts long before addicted people are ever exposed to a drug—and at least 85% of those who try heroin and other opioids do not become addicted. Addiction rates are higher in poor people—not because they are less moral or have greater access to drugs, but because they are more likely to experience childhood trauma, chronic stress, high school dropout, mental illness and unemployment, all of which raise the odds of getting and staying hooked.

Addiction spreads, essentially, when people are traumatized and when they lack meaningful work and/or social support. As growing economic inequality shrinks the middle class and creates ever greater stress on more and more people, it’s not surprising that we would see an increase in addiction rates. Supply isn’t entirely irrelevant because it can determine which drugs are most popular—and if it is a dangerous class of drugs like opioids, this can increase harm.

But if we keep repeating the idea that addiction is a contagion emanating from an immoral underclass that we don’t like, we’ll never understand it. Coverage of “heroin epidemics” and addicts who aren’t “typical” doesn’t lead to good drug policy—it reinforces stereotypes. As we have seen over the past 50 years, that, in turn, leads to harsh laws that lock up people who look like what the media suggests is “typical”—rather than to money for treatment for those who actually need it.

There are no “typical” addicted people—and the sooner we recognize this, the sooner we’ll be able to give them real help.