"Mad Men." "Game of Thrones." It's wild how many essential modern shows have a direct tie to the treacly rom-com 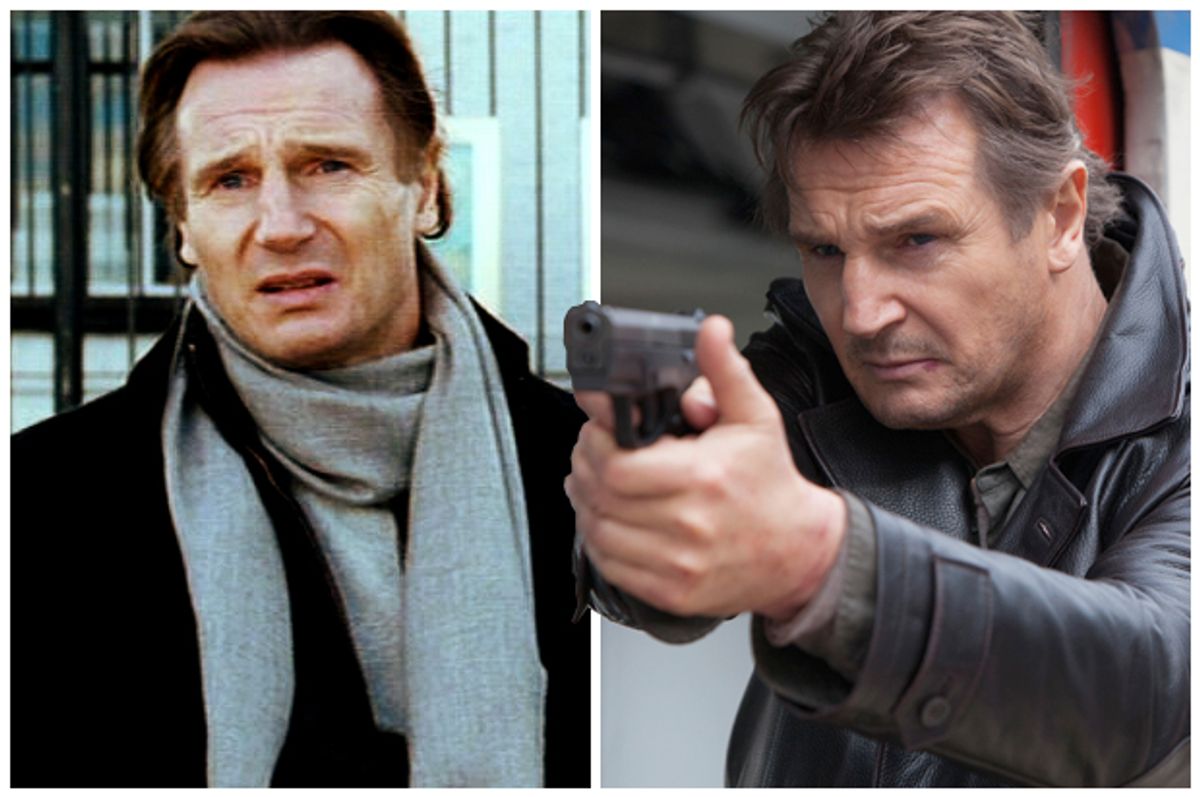 Liam Neeson with scarf in "Love Actually," with gun in "Taken 2"
--

He lands in Milwaukee and winds up in a bar with three beauties who agree to take him home. (This was before collective bargaining in Wisconsin became so fraught.) The beauties have just a few fleeting moments of brainless dialogue, but they are January Jones, later known as Betty Draper in “Mad Men”; Ivana Milicevic, the female lead in the possibly less iconic series “Banshee”; and Elisha Cuthbert, who will be a nearly constant source of annoyance as Jack Bauer’s daughter Kim for about a decade on “24.”

Nothing all that remarkable there, right? One of the reasons this film has proven so durable – some might say unkillable – is that director Richard Curtis looked beyond the boundaries of the conventional rom-com. What if there were plotlines aimed at other audiences? What if there was a ham-fistedly obvious wish-fulfillment fantasy for all the young dudes? One therefore needs hot women, offered up like canapés. Curtis just happened to pick three actresses who had interesting work ahead of them.

That certainly doesn’t prove “Love, Actually” is a big sticky cultural sleeper cell, does it?

Wait.  Let’s examine another threesome. Peter and Juliet are recently married. Mark, Peter’s best friend, is fiercely loyal to Peter and therefore doomed to live in sweet agony because he is secretly besotted with Juliet. When you saw the film in 2003, you might have recognized Juliet as Keira Knightley from “Bend It Like Beckham,” but that would have been your only real shot. 2003 was her explosion year. Peter you know now as Chiwetel Ejiofor from “12 Years a Slave.” Mark you know as Rick Grimes, the closest thing to a protagonist on “The Walking Dead.” (The actor’s name is Andrew Lincoln, although I am mysteriously compelled to tell you he was born Andrew Clutterbuck.)

So this is getting a little weird. I mean, if you were the Mel Gibson character in “Conspiracy Theory” – or for that matter if you were Mel Gibson – it wouldn’t take much more to tip you into a spasm of paranoia.

OK, toward the end of “Love, Actually,” many of the plotlines converge on an inexplicably seafood-themed school Christmas pageant. A teacher from the school, Mr. Trench, steps forward onstage to introduce the final number and ask forgiveness for the faculty’s participation as backup singers and dancers. There’s something a little familiar about Mr. Trench. That’s because he is also Elliott Schwartz, former best buddy of Walter White on “Breaking Bad.” Walter and Elliott did the spade work on a company that became the wildly successful Gray Matter Technologies, but somehow Walt did not reap the rewards. Walt returns to Elliott in the final episode and puts a red sniper’s dot on the man’s chest. No, you have not been forgiven for your 20 feet from stardom on “All I Want for Christmas Is You.”

Now Mel is getting restless, taping more newspaper clippings up on the inside of his trailer.

So I’ll mention a more obvious through-line. On Sunday night (no spoilers!), something happened to Jojen Reed, the clairvoyant companion to Bran Stark on “Game of Thrones.” Jojen is played by Thomas Brodie Sangster, otherwise known as Sam, the lovestruck little drummer boy in “Love, Actually.”

Those are most of the hidden prizes, the Easter eggs in the Christmas pic.

In much more obvious ways, “Love, Actually” is a surprisingly comprehensive Rosetta Stone for all that was to come. Reviewing it for Salon in 2003, Stephanie Zacharek wrote, “If movie theaters had windows, I would have jumped out of one by the end…” Good luck with that. “L,A” is inescapable. It was a genius movie to make, essentially a Robert Altman chick flick, and Curtis’sharp casting eye has put the film’s alumni all over the pop culture map.

Thornton was one of three actors caught at their career peaks in 2003, when his “Love, Actually” presidential role was such a perfect fusion of Bill Clinton (basically a talking penis) and George W. Bush (basically a talking prick). The same year, he released “Bad Santa” (can there be two more diametrically opposed and yet adult Christmas movies?) and the underpraised “Intolerable Cruelty.” He’ll always work, but 2003 ended a seven-year run of greatness.

So too Hugh Grant. As the prime minister, he is charming, stuttering, stumbling, blinking, half-smiling and adorably twitchy. In other words, pretty much the way he had approached every role since 1994 -- but right after “Love, Actually” the magic ran out. “Cloud Atlas” (ai-yi-yi!) has been his only major role that was not a Bridget Jones sequel. Next year he will be Mr. Waverly in a steroidal remake of “The Man from U.N.C.L.E.” When you’re taking over roles from Leo G. Carroll, you’re not far from attempting “King Lear” in regional theater.

Liam Neeson is more problematic. He became, if anything, more bankable, but 2003 is very near the moment when he would start his dizzying race to the bottom against Nicolas Cage, his kraken-releasing, his brandishing of a particular set of skills, his philosophical quest to see how far from Oskar Schindler he can take himself.

I could go on. It’s almost impossible to think of a major pop culture franchise into which “L,A” has not been at least splashed or dashed, like a vermouth or bitters. Alan Rickman, Emma Thompson and Bill Nighy soldiered through the Harry Potter films. Jones made an “X-Men” film. Freeman’s a hobbit. You gotta get past Laura Linney if you want to watch “Downton Abbey.” And Rodrigo Santoro, whose Karl failed to consummate with the distracted Linney, later turned up in a brief role on “Lost” and as Xerxes in the “300” movies.

In the manner of Mel in his aluminum trailer, I’ve been asking myself if there’s a deeper and possibly more sinister meaning to all this. Is there a sense in which Curtis, in shopping around his mostly roseate view of love, sex and occasional heartbreak, is telling us something more profound and durable about our lives in this century? Or, more likely, lying to us about ourselves in a significant way?

But no, no, no. It’s not there. “Love, Actually” is a beaker of irresistable treacle that tipped over and spread across the floor of cinema and TV, seeping into the cracks of everything we watch now. What does that prove?