Mike Daisey: One-half of the human race is treated so much worse

The "YES THIS MAN" monologist on sexuality, his critics and why he changed his show's title from "YES ALL WOMEN" 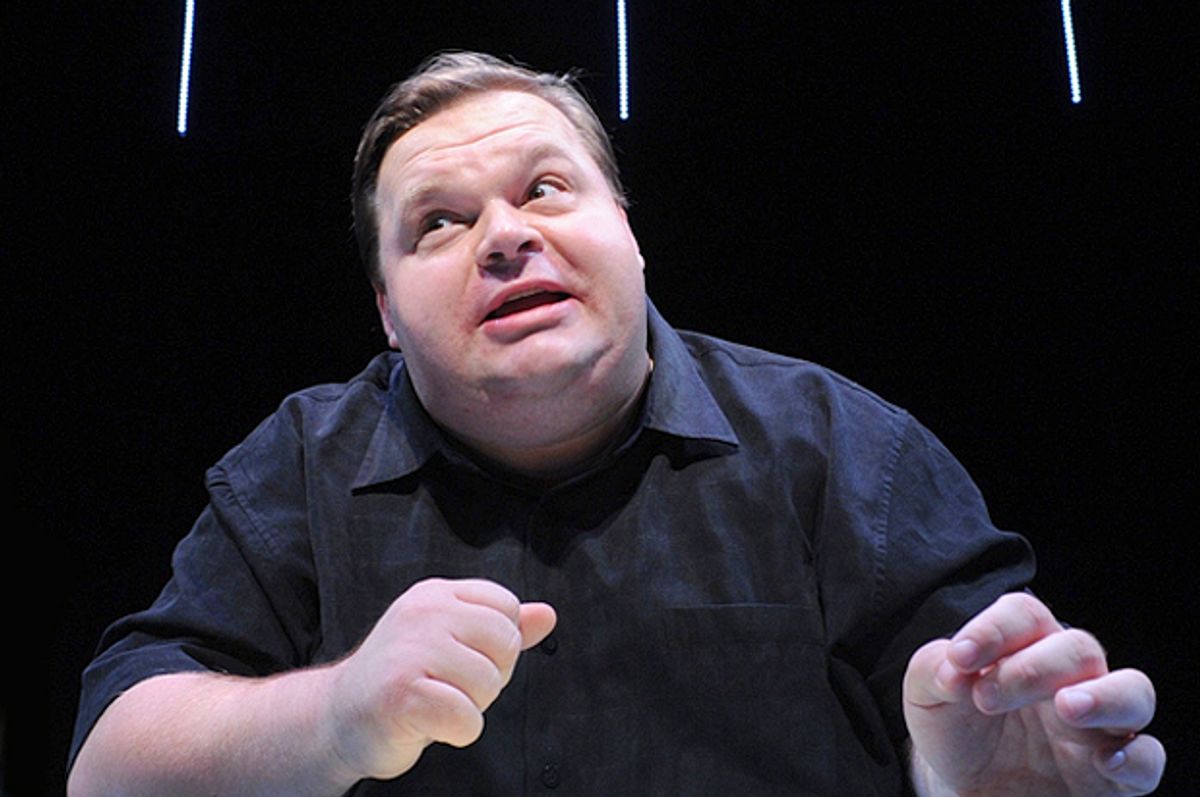 This week the monologist Mike Daisey became, once again, the target of Internet ire thanks to his new show: "YES ALL WOMEN."

That is, it was called "YES ALL WOMEN," until it wasn't. He changed the name of his new show, set to debut at New York's Public Theater on June 25, to "YES THIS MAN," in response to the online outrage it stoked. The title still shares resonance with the #YesAllWomen movement, the hashtag created to collect small examples of sexism and violence that women confront every day, which sprung up on Twitter after the misogynistic killing spree in Santa Barbara, California, last month. But now the name of his show no longer suggests that Daisey is someone equipped to explain to women their own experience. Daisey apologized for the hurt on his website, noting that he was "especially sorry for anyone who felt like this was belittling #yesallwomen, which I think is a fantastic and necessary hashtag and conversation."

That hardly changes the fact, though, that Daisey is a hugely controversial figure even beyond the small world of the American theater. He's likely still best known for, two years ago, having had a story about Apple's dealings in China retracted by "This American Life" after he represented it as the result of a visit to an Apple factory. (It was not.) The "This American Life" piece was excerpted from "The Agony and the Ecstasy of Steve Jobs," another of Daisey's monologues and one whose degree of veracity is still being interrogated to this day.

Not that it matters to Daisey. Title imbroglio aside, he is charging on with a show intended to entertain and edify his core audience. (Which is to say, not his online critics.) He has no answers as to how to deal with society's entrenched misogyny. "Even trying to put my arms around it in the course of an evening," he said, "will be a success."

What did you make of the reaction to your original title?

It's upsetting when people say extremely vicious things to you, and people feel license to do that often. But I've got to tell the truth -- I don't know that it does bother me that much. What I took from it, more, is how charged this conversation is. I can see the path where I'd argue that "You don't know what I'm going to say" [in my monologue], but many people were talking about identity politics, which is important. The fact that that title used the same words as the hashtag and that I'm a white man -- to a lot of those people it wouldn't matter to them. I take them at their word. I don't know how good the discussing has been.

As a white, heterosexual male, are you conscious of the degree to which you might be seen as appropriating others' stories or drowning out other voices?

-- do you feel as though you're appropriating others' stories -- do you hear that criticism?

Well, I mean, there are two different arenas. There's what happens online and then there's what happens in the room. In the room, I'm confident of my ability to talk to people in a human way. In the public arena, where the art isn't happening -- I feel like sometimes we fall into these traps of thinking in a really small way about appropriation. White men tell everyone what to do all the time, constantly, all the time, forever. They run everything, all our institutions. And 50 percent of the human race is not valued as being fully human. Men are centrally responsible for that. I believe men are responsible for that. We do it. To women every day. In that atmosphere, you try to be as human and open as possible. If they're suspicious of a white man talking to them -- good! What a different world it'd be if we were suspicious of white men everywhere!

The act of speaking, in my experience, about the gender we're embedded in oppresses people, and that's their right to feel that way. Every action a person does is some kind of oppression. Dominance and oppression is everywhere.

Do you think you'll ever be able to make it up to the people who are angry at you over the Foxconn incident?

This is a great example of the massive disconnect between the online world and physical world. The people who see my work -- I don't like money very much, but it's the structural system we're embedded in for how power is distributed. People who've been to my work and responded to it -- not to toot my own horn, but there's a huge disconnect. I don't have any problems where people throw tomatoes at me, or stare stonily at me. I don't have any of those problems. In the room, the shows are sold out, often, and full of people who want to hear a story.

When did you start working on this show?

This show started gestating almost two years ago. It had a working title I knew was terrible. The working title was "Feminism." I knew it was a bad fit. But it was fundamentally about women, men and the struggle of women not to be subjugated, and my complicity as a man in that system. I talk about this all the time with friends and colleagues I respect. There were a lot of shows that gestate for a long time, so it was always on the burner for a long time. #YesAllWomen happened -- but it was less about the fact it was popular and more about ... I got obsessed with reading the Twitter stream, setting [the hashtag] up to flow in real time. There was something about the arrangement of tweets. They were utterly randomly arranged and so wildly outside my experience. There were tweets about horrific rape, then awful but mundane details of the workplace. Something about how they were interweaved was very moving. I think about these things a lot. I just do.

There was something about the stream that shook me up. I worried "Is the title really gonna work?" It seems foolish in hindsight, but I thought putting spaces and not using a hashtag would be seen clearly as commenting on it. And when the show was released for sale two weeks ago, I got a great response from people who know my work. They bought all the tickets.

The people who see my shows said, "This'll be fascinating. I can't wait to see how you tackle this subject."

Did you anticipate the sort of response you've gotten so far?

What is a response? People tweeting that they're so angry? And then there's a response of actual people downloading my actual podcast and actually listening to my actual work in its entirety. They've chosen to engage, and I'm engaging with them. The rest of the world has this reaction. This is going to sound funny or foolish -- but this isn't my first ride at the rodeo. My show "21 Dog Years" was about Amazon while the dot-com bubble was swelling and burst. People were furious I would talk about Amazon this way. In a show about the state of the American theater, "How Theater Failed America," I commented about my employers, how that system has failed its artists. That's your job as an artist. People said, "He's controversial," when Christian fundamentalists poured water on my notes.

I'm not trying to make light of anything, but the truth is, every two years or so, I'm controversial for something. Last month, I was controversial in a Canadian context because I was doing a monologue about Rob Ford. But none of these groups talk to each other. When I was doing the Apple show, people said, "We last heard of him during Amazon, here he is again!" I was like, Dude, it's been eight years! People like exits and entrances, just like the theater. They imagine you vaporize in between.

Would you say that there's any way out of the gender morass we're in right now, or are we stuck with it?

I don't know if I'm comfortable saying we're stuck with it -- that may be a little negative for my taste. In my career, a lot of what I do is talk about secret histories. The best secret histories are those in front of us. That's why I like talking about Apple and their devices. They're right in front of us but we don't want to think of them. It's hard to think about how half the human race is treated as less than human. And if you're a man, you don't want to think about how you're part of it. It becomes the bailiwick of women to discuss both sides of the argument, to discuss the biggest secret history of all time, how one-half of the human race is treated so much shittier. It's almost hard to talk about it because it's so huge and so horrible.

I don't know -- I'm far away from a solution! My show "The Last Cargo Cult," that show also did not have a solution -- ultimately money is liquid power. The more power we work with abstracts us from life, makes us crueler and meaner. But that show didn't come with a solution! I don't know what to do about the fact that money does this to us. I feel like this is even more primal than money, and even trying to put my arms around it in the course of an evening will be a success.

Did you learn anything in the process of researching the work?

Sadly, no. I read a lot of what are traditionally referred to as feminist writers -- Jezebel, I scroll through; Mistress Matisse, writers who are combating or addressing how sex workers' jobs often get demonized, Melissa Gira Grant -- and am well-versed in the statistics. But I sadly didn't learn that much in a factual way, I was aware of how deeply fucked up things are. It is an impressive thing, impressively difficult to take an accounting of your own life. I intend to talk about my own life, where I stand, where I've fallen short. It's hard to look at yourself.