Reason vs. the right: Have conservatives abandoned science and rationality? 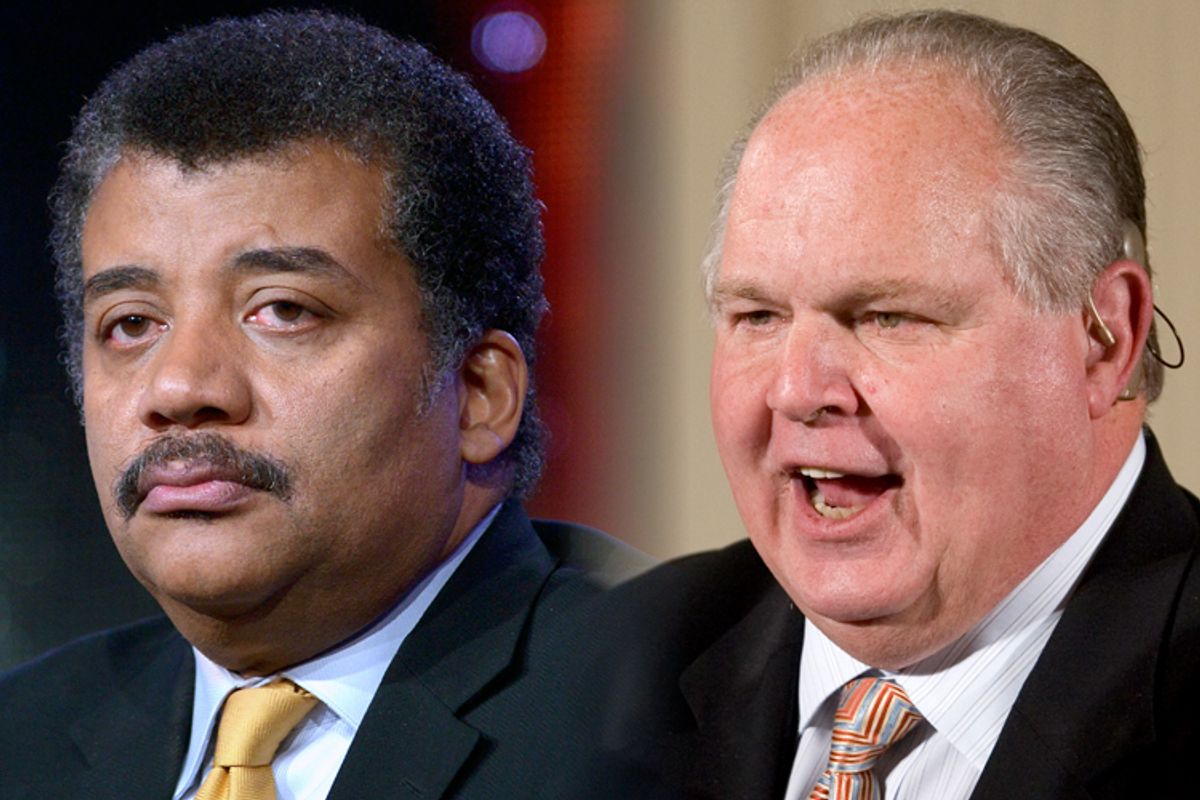 For consumer advocates and other skeptically minded folks who promote reason and evidence over wishful thinking, watching Sen. Claire McCaskill rip into Dr. Mehmet Oz—a surgeon who teaches at Columbia University who made his fame as the host of “The Dr. Oz Show”—was a thing of beauty. Despite his seemingly impeccable medical resume, Oz has long been a target for consumer advocates who criticize his endless willingness to shill for any “miracle” herbal remedy or supplement he promises will help melt the pounds off fast, while in reality, doing no such thing. (Responsible doctors continue to point out that only diet and exercise can help you lose weight.) Watching McCaskill drag Oz in front of C-SPAN cameras and make him squirm while she accused him of profiting off misleading people felt like a big win for the side of consumer protection.

But it was more than that: It was yet another high-profile case that strengthened the growing sense that science, skepticism, and reason are increasingly becoming a major part of the "liberal agenda." If you doubt it, try to imagine a Republican in McCaskill’s shoes bothering to confront anyone, much less someone who is getting rich off lying, about flying in the face of “scientific consensus.” Even though there was no discernible Republican pushback against the Oz attack, the idea that Republicans could be bothered to care much is also hard to fathom. McCaskill clearly felt confident pushing this agenda in no small part because being on the side of empirical evidence and rationality has become a huge part of the liberal/Democratic brand.

The possibility that rationality itself has become a partisan issue is disquieting to many who prefer to believe that “both sides” have topics that they are irrational about and irrationality is evenly distributed among all political stripes. That may have been true in the past, but increasingly, Americans are rearranging their political views and their views on empiricism so that liberals are putting much more of an emphasis on rationality. Indeed, many of the irrational notions floating out there that are assumed to be “liberal” are, in fact, becoming more associated with the right as this reshuffling takes place.

Take, for instance, the idea that vaccinations are dangerous or linked to autism. This is one of those views that tends to be held out as evidence that liberals are just as nutty and irrational as conservatives. Recently, "The Daily Show" held out anti-vaccination sentiment as the “liberal” version of anti-science movements on the right, such as climate change denialism. It was a funny segment and it’s important, of course, to call out misinformation campaigns regardless of the political affiliation of the people running them.

There was just one little problem: A recent poll conducted by Public Policy Polling showed that more Republicans than Democrats worry that vaccines cause autism.

The difference wasn’t small, either. Over a quarter of Republicans had this concern, whereas it was closer to one in five Democrats. As the doctor interviewed in the segment mentioned, anti-vaccination sentiment is more tied up in wealth and class privilege than political leanings. Even though outbreaks occur more in blue states than red, it’s because, in no small part, blue states have more dense, expensive urban areas where wealthy people who shop organic and want to believe their kids are too good for grubby poor people vaccines live, and that matters more than political leanings.

In addition, anti-vaccination sentiment is a distinct minority in both parties. In contrast, the majority of Republicans reject the scientific consensus that global warming is real and human-caused. The two wouldn’t be comparable even if anti-vaccination folks were more liberal, which they are not.

More to the point, can you imagine a conservative show calling out conservative science denialism in the same way that the liberal "Daily Show" called out vaccination conspiracy theories? Not really. By attacking anti-vaccination people, "The Daily Show" ended up demonstrating how much the insistence on factual evidence and empiricism has become part of the liberal brand, so much so that calling out your own people for drifting from the facts is a habit that’s far more associated with liberals than it ever could be for conservatives.

The recent reboot of the show Cosmos on Fox further demonstrated how partisan the very idea of science and empiricism has become. The show, which features astrophysicist Neil deGrasse Tyson taking over the host role from the original’s Carl Sagan, was aggressive in defending science, curiosity, and following the evidence from people who would rather rely on faith or authority, but it took no partisan positions. Nonetheless, it was immediately understood by Americans both left and right as a “liberal” show, merely for its strong insistence that facts should not be ignored in favor of wishful thinking.

Even though the show was hosted on the Fox network channel, Fox News, the conservative cable channel, did not hold back in the slightest from attacking Tyson for perceived liberalism. In a shockingly racist segment, host Greg Gutfeld and guest Gavin McInnes dogged relentlessly on Tyson, insinuating that he can’t really be an astrophysicist and making fun of “white liberals” for being enthusiastic about Tyson and his work. It only grew uglier with McInnes claiming that Tyson deserved to be mistreated based on his race when he was young because he “fit the profile” by having “a huge afro.”

While that was the ugliest example of race-baiting, overall conservative media had a tendency to treat Cosmos like its insistence on empiricism and rationality was inherently a culture war issue, so much so that many Christian conservative media outlets attacked every episode in the series with fervor. It wasn’t just when it came to Tyson’s acceptance of evolutionary theory, either. Christian conservatives threw a fit because the show told the story of how Giordano Bruno, a 16th century monk, was burned at the stake for free-thinking. Even though the story fit directly into the larger argument the show made about the dangers of repressing free inquiry, Jay Richards of the Discovery Institute felt that criticizing the church for torturing a man to death should be off-limits because the man in question was a monk, not a scientist.

Or, even more hilariously, when Tyson mentioned in passing on the show that Christmas was established by the church not because it’s actually Jesus’s birthday but because the church needed a holiday to compete with the popular pagan Saturnalia, Richards completely exploded in rage and denial. “We learn that the holiday celebrated by a couple billion Christians is really a camouflaged take-over of Saturnalia, the High Holy Day when ancient Romans celebrated Saturn, the god of agriculture,” he whined. The only problem is that when Christmas was established, Christianity wasn’t a religion with two billion followers. It was an upstart faith and Saturnalia was, in fact, one of the hands-down most popular days of the year for the followers of the pagan faiths that had been dominate for thousands of years. None of this requires math to understand, but now the right has gone so anti-evidence that even boring old history is considered up for debate.

Meanwhile, the liberal media promoted the hell out of Cosmos, making it must-see TV along liberal stalwarts like Mad Men and The Daily Show. The sense that liberals “own” science as a political issue and conservatives range from indifferent to openly hostile to it has become simply another part of our cultural landscape and our deepening cultural divides.