Coming soon: An unholy alliance between the GOP and Silicon Valley

When the dust finally clears from the Tea Party insurgency, the tech industry could become the Republicans' new BFF 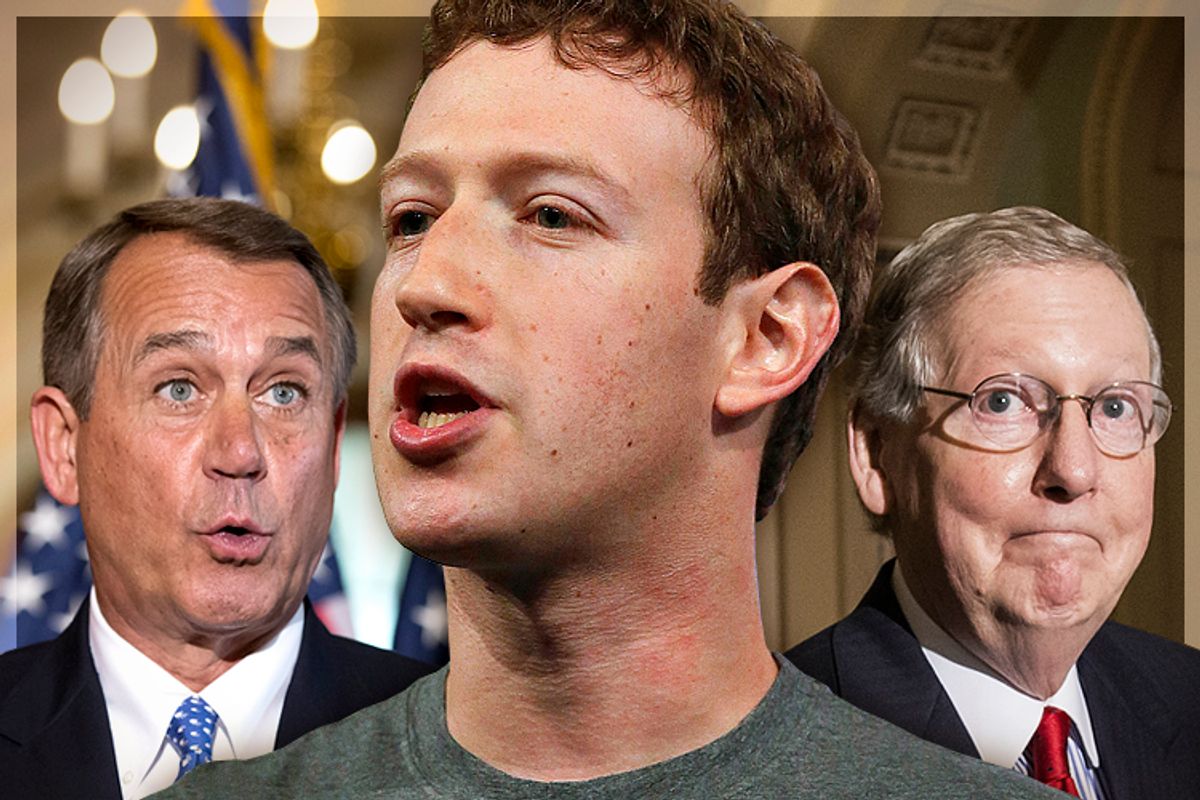 As conventional wisdom and a bevy of polling indicate, Republicans are poised to do well in the midterms in November. But the 2016 electoral math does not favor the GOP -- and it only gets worse from there. People can quibble with the presumed inevitability of a President Hillary Clinton, but if the Republicans keep losing, they’ll eventually be forced to moderate some of their positions, even if the opposite seems true at the moment. Already, they’re reconciling themselves to nationwide same-sex marriage.

Twelve years in the desert sent the Democrats rushing straight into Bill Clinton’s arms, a fairly enormous transformation from McGovern in ’72. Likewise, there’s no reason why the GOP wouldn’t reevaluate a losing strategy -- especially if they lose to another Clinton. Out of phase with an increasingly diverse and secular America, the Republicans are eventually going to have to cut the crazies loose. And the best replacement to fill a Tea Party-shaped hole in the conservative coalition is the tech industry, whose place in the Democratic fold is starting to grow uncomfortably awkward.

Although located in one of the most overwhelmingly Democratic regions in the country, Silicon Valley is the Republican Party’s natural ally. Such an axis could even lead to a wholesale reconfiguration of the American political landscape. While the suggestion that the Republicans will shake free of their most retrograde ideas sounds far-fetched, the party has performed dramatic 180s before: As recently as 1976, the GOP was explicitly pro-choice, and the only African-American senator was a Republican. If mounting electoral losses drive the Republicans to ignore the haters, American politics might shift into a battleground of progressives versus libertarian centrists. Tea Party dead-enders will be full of sound and fury, but legislating nothing.

Currently, the Republican Party -- dying in California and virtually extinct in most of the northeast -- is an unwieldy alliance of heartland true believers and their cynical coastal bankrollers. (Yes, for all the Tea Party’s folksy appeals to sepia-toned Real America, it’s Wall Street that puts up the money.) New York magazine's Kevin Roose recently identified an incipient convergence of established banks and financial startups, a fusion that is only likely to solidify. Banks know they have to look west to innovate, and tech companies require infusions of capital, making it a natural pairing. “All these [financial startups] are kind of waiting for Visa to pick them up,” one analyst is quoted as saying.

As the tech sector matures, it’s shedding the "Don’t Be Evil" charade and gleefully embracing a lucrative synthesis of corporate and state power, all the while advocating for changes in immigration law that allow more foreign-born software engineers and satisfy their well-reported itch to suppress salaries. In other words, Silicon Valley’s trajectory fits seamlessly with the rest of Republican-leaning corporate America. Libertarian or not, its vaunted innovation just so happens to service the national security state, whose preservation is another vital component of Republican ideology.

That same libertarianism is ascendant within the party, personified by Rand Paul. For all of its inherent contradictions, it resonates with young people far more than the Fox News hate machine, which is calibrated toward a viewership whose median age is 68. Tech-savviness is crucial to reaching voters under 35, and the Republicans are going to have to do better than those “Scott G.” ads, in which a bespectacled Republican hipster pumps single-origin petroleum while being so over regulations. But an alliance with the tech industry might go a long way to bridging the generation gap. (And it’s currently a gap on both ends, as anyone in Silicon Valley who’s over 33 and looking for work can tell you.)

Major political upheavals of this kind tend to start in California before spreading elsewhere. A solidly Republican state as recently as the early 1990s, the Democrats now command supermajorities in both the State Senate and State Assembly, and might even pick up a seat in the House this November. The California GOP, meanwhile, has been reduced to a rump party with pockets of strength in inland Southern California and the Central Valley. Unable to win statewide office since Arnold Schwarzenegger was governor, even Orange County is slipping away from them. Although the Democrats may be reaching a political zenith in the state, there is a potential cleavage -- and it runs right up I-880 in Santa Clara County.

In the 17th Congressional District, tech cheerleader and Democrat Ro Khanna is the face of Silicon Valley’s electoral hopes and dreams. A Stanford professor and former deputy assistant secretary for commerce, Khanna wrote a book spelling out how America’s industrial preeminence rests on doing everything Silicon Valley wants, earning praise from Tesla’s Elon Musk and Intel’s Paul Otellini. His primary challenge against Democratic stalwart Mike Honda was a proxy battle between the young technologists and the liberal old guard, and Honda won 49-27 (although the two will face off again in November). If Khanna is rebuffed, it will be in spite of endorsements from major Bay Area papers and a lot of financial support from tech executives, although not without some controversy. The race is an echo of the 2012 battle in the neighboring 15th District, where 32-year-old Eric Swalwell unseated 20-term liberal lion Pete Stark, shifting the district in a pro-business direction. Khanna, a tech insider if ever there was one, is clearly being groomed for a long career as the Valley’s chief Congressional advocate.

The marriage of corporate-leaning Democrats and pro-immigration libertarians who aren’t hostile to abortion rights or same-sex marriage might be the only path toward viability for the California GOP. The money is already moving in that direction: Although rank-and-file employees at Google, Yahoo, Facebook and other large tech firms skew heavily Democratic, the industry’s corporate PACs donated considerably more to Republicans in 2012 than in 2008. Newly minted billionaires definitely skew conservative, up to and including things like a libertarian utopia in the form of flotsam, or the proposal to divide California into six states as an end-run around progressives.

Moreover, on the issues, there isn’t all that much ideological daylight between Ro Khanna and Neel Kashkari, the surprisingly moderate Republican sacrificial lamb who’s running against Gov. Jerry Brown. The fact that in the June 4 primary, Kashkari edged out Tim Donnelly, a latter-day John Bircher who thinks Jerry Brown is a “Marxist,” proves that the xenophobic GOP id can be restrained, even as the techno-utopians dream their dreams of everlasting corporate dominion.

Of course, this entire scenario depends on the Republicans not just taming, but actually expunging, what is now their dominant faction. Charles Pierce at Esquire grimly observed that the GOP’s “lizard brain” might actually be content to keep losing the presidency indefinitely. As long as the wacko birds have a gerrymandered lock on the House, where they can gum things up and purge lifers like Eric Cantor without consequences for their majority, they’ll be satisfied. But the demographics won’t sustain that in the long term, and a string of losses will eventually create its own psychological burden for the party, along with a stream of articles with titles like “Is the Republican Party finished?”

By that time, Silicon Valley may have its fist sticking out, ready for a bump.

Peter-Astrid Kane (they/them) is the Communications Manager for San Francisco Pride and a former editor of SF Weekly. Their work has appeared in SF Weekly, Vice, MSN, 429 Magazine and the Bold Italic.