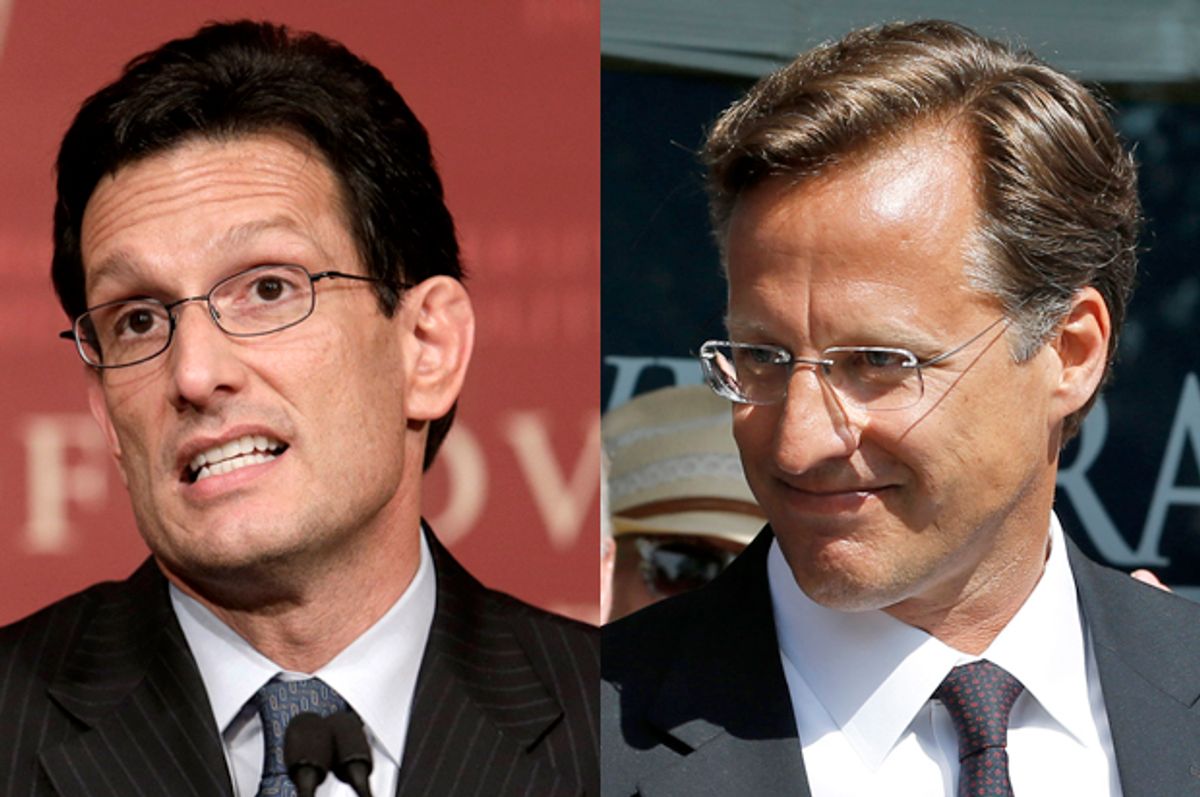 Throughout this spring’s Congressional primaries, as in recent years, voters have been served one of the great misleading claims of modern political discourse: the “anti-establishment” campaign narrative. Republican candidates, in particular, love to thunder this phrase from the stump – copping a Joey-Ramone-in-torn-jeans act while sporting bespoke power suits. Reporters lap up and regurgitate the rhetoric, perpetuating a false dichotomy of terms as the simplest way to understand a given race.

This month’s thunderbolt of a primary shocker epitomized this pattern. The defeat of Eric Cantor – the first House majority leader to ever lose a primary – to upstart David Brat “shatters in one dramatic stroke the conviction of the GOP establishment that it was finally getting the upper hand against the party’s conservative rebels,” declared one Wall Street Journal analysis. Such had become the default setting for coverage of primary victories from across the country this past month – chief among them Mitch McConnell staving off a flank challenger as symbolic of the “establishment” reasserting itself and questions being raised about whether the Tea Party would “rally behind [the] GOP establishment.” Brat’s “decidedly anti-establishment campaign” changes the dynamic, but not really the narrative template.

For that frame, “anti-establishment,” represents something more than mere puffery, as its use has exploded in recent years. It speaks to anxieties about power and democracy better than any other phrase in politics today, even as it redirects that angst away from crystal-clear economic realities and toward vague socio-cultural specters. “Anti-establishment” is, in short, how the GOP talks about class – without actually talking about class. (Rick Santorum, after all, forbade as much at CPAC in March.)

Empirically, there is, quite simply, a lot more “anti-establishment” clamor to go around nowadays. An archival scan of its recurrence in The New York Times finds that the phrase was invoked in political contexts at least 400 times during Barack Obama’s first four years in the White House – that’s twice as much as in any previous presidential term since 1980.

Obviously, most of that hot air has bubbled up in Republican circles, as part of (and in response to) its Tea Party rebranding. Easily the most priceless invocation came during Newt Gingrich’s flickering 2012 primary surge, when he began speechifying that his campaign represented “a mortal threat to… the establishment” and that “the Republican establishment is… determined to stop us.”

Coming from the former Speaker of the House of Representatives, this was a clever twist of intellectual jujitsu – a bit like Yankees fans seeing their team as underdogs. Sarah Palin, never one to shy away from using cultural populism to obfuscate neoliberal economics – which is, essentially, the phrase’s function here – rallied to Gingrich’s defense along similar lines: “They want to crucify him because he has tapped into that average everyday American Tea Party grass-roots movement that has said, ‘Enough is enough of the establishment.’” Here again, the irony is thick: former vice presidential candidate posing as maverick outsider. Yet virtually every major GOP politician of late, it seems, has drawn upon this trope. Why?

Why, in the aftermath of the financial crisis and the Great Recession, has all that “anti-establishment” campaign rhetoric gotten louder?  And how might it explain the successive shuffle of GOP frontrunners in 2012 from Michele Bachmann to Herman Cain to Donald Trump?  I would argue there are four main ways the phrase appeals to crowds – each of them usefully redirecting the pitchforks away from those with monetary capital and toward those with socio-cultural capital.

First, it neatly frames a contest as insurrection versus order. According to analysis from FiveThirtyEight, the Cantor race had “a heavy insider vs. outsider dynamic.” Although incumbency theoretically has its privileges, when Congressional approval ratings hover near the single digits and every election seems to feel like a “change” election, it’s best to downplay experience, for fear it comes across as “insider.”  (Curiously, politics is that rare profession where experience might actually make you less qualified.)

Second, it invokes populism set against undemocratic means. Here the “establishment” is deployed as code for power brokers in the smoke-filled backrooms cliché – where party leaders and leading pundits with special access coalesce around the proverbial “next guy in line,” to the chagrin of actual voters. With regular folks feeling a (not unjustifiable) sense of lost agency in the democratic process, the establishment here serves as an unknowable boogeyman – inciting conspiracy theories of a secret cabal of Fed governors and Illuminati and black helicopters and so on. A generation ago, Richard Hofstadter famously dubbed this “the paranoid style” of American politics.

Third, “anti-establishment” carries a handy whiff of real America versus elitism. If and when a GOP candidate ever speaks of a “ruling class,” the emphasis is on “class” in a lifestyle sense: well-educated, bicoastal, cosmopolitan, “Chablis-drinking and brie-eating.” This is the country club “establishment,” the now-extinct Rockefeller Republican, invoked to mobilize seething toward expertise and taste: the people who act like they are better than you.

Finally, “anti-establishment” offers shorthand for declaring a candidate’s purity against compromises – here, too, apparently a pox on Cantor’s chances. Yet the tension is not merely one of conciliation versus absolutism, but rather a disquieting sense that calculating, careerist centrists and their scripted inauthenticity dominate politics today. This is how “electability” can come to be, bizarrely, a liability – at least relative to the purity of purpose in which attaining power is not seen as the end in and of itself.

To be fair, railing against Washington is a political trick familiar to both sides of the aisle. Obama’s 2008 premise of “hope and change” rather explicitly made this a campaign foundation. And various Democratic candidates have, over the years, been aligned with that same nebulous “establishment” in media coverage – from Walter Mondale to Martha Coakley. The term is, ironically, both durable and flexible enough to accommodate left and right alike, perhaps partly because it’s convenient shorthand for renewal – out with the old, in with the new – that appeals to a basic tenet of and faith in democracy. Such a timeless yearning is bipartisan. Yet nowadays, Republicans are uttering the phrase far more than Democrats – and far more than ever before. And while campaigning against “business as usual” in Washington, the GOP is doing very little campaigning against “business as usual” on Wall Street.

In that sense, these fears – of incumbents, insiders, elites and dealmakers – are stoked without really tackling the underlying material conditions that gave rise to them. The practices of a political (and social and cultural) establishment are castigated, while the economic establishment dare not be named. The rhetoric is a way of channeling resentment toward wealth disparity, reduced social mobility and corporate interests that are more powerful than ever without actually disrupting that influence with policy proposals. It addresses the anxieties of the working class without redressing them.

As Theda Skocpol and Vanessa Williamson point out in their book, "The Tea Party and the Remaking of American Conservatism," in America, the “elite” is constructed not “as an economic category but as a cultural stratum.”  This is why “renegade billionaires” like Sheldon Adelson (Gingrich’s 2012 patron) and Foster Friess (Santorum’s), unbridled by Citizens United, can masquerade as threats to “traditional… power brokers” in the “establishment.” The Koch Brothers are, more or less, playing the same game themselves, as are other one-percenters crusading for the common man.

Perhaps most amusing of all is the New Left lineage of the co-opted term itself: “Anti-establishment,” one might recall, has roots in 1960s counterculture and activism, but, by 2014, “The Man” has come to represent a socio-cultural specter that haunts audiences without reference to their economic plight. This is why Dick Armey, Tea Party financier from FreedomWorks, can praise “the methods of Saul Alinsky,” and jack his lingo, while working toward radically opposite ends – adopting the anti-authority appearance of hip rebellion while distracting from financial titans and pervasive inequality. The most persuasive kind of power, after all, is that which denies its own existence.

The “establishment” is a worthy subject this primary season. It’s just not the one that’s going get talked about.

Michael Serazio, an assistant professor of communication at Fairfield University, is the author of Your Ad Here: The Cool Sell of Guerrilla Marketing.