The paper of record suggests the U.S. is too honorable to hang with international competition. Oh please! 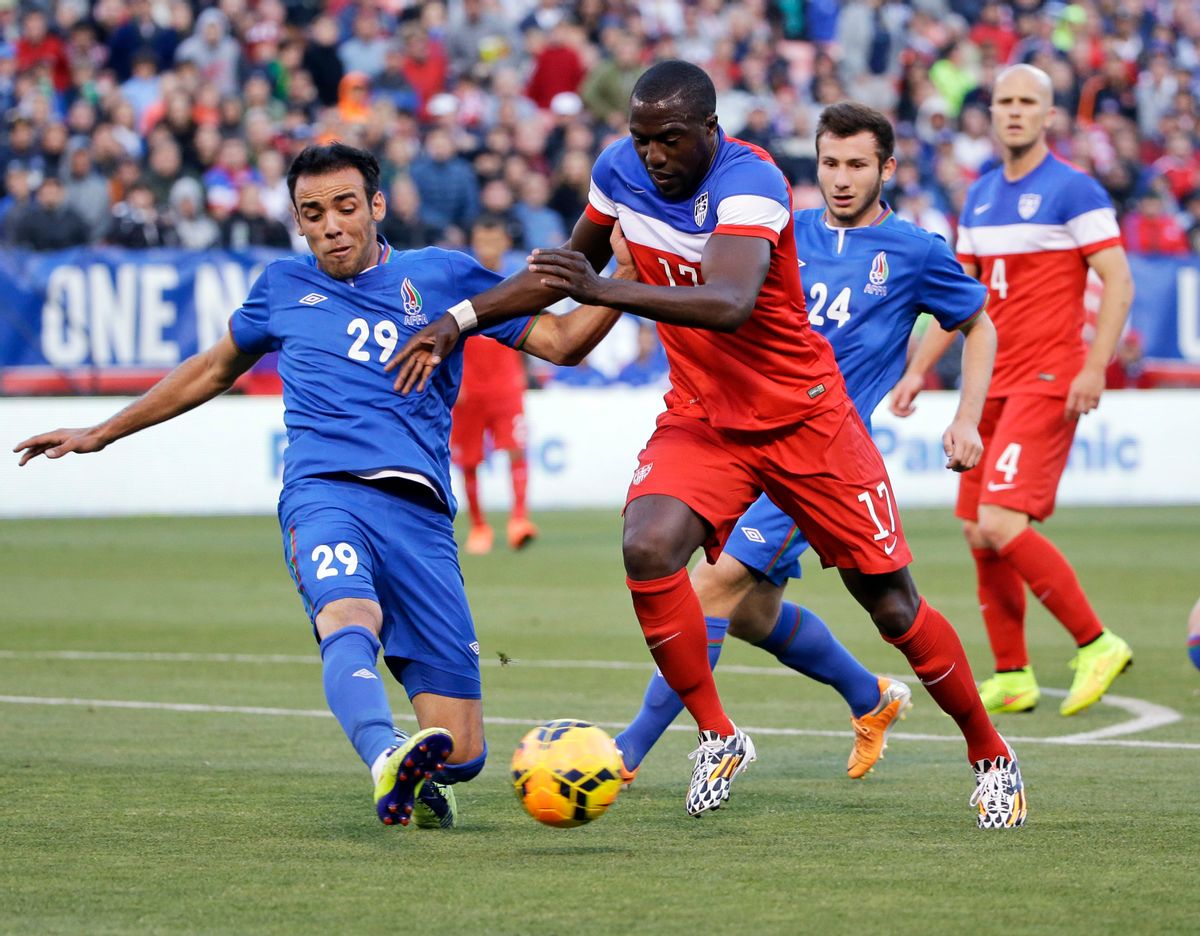 United States' Jozy Altidore (17) tries to dribble around Azerbaijan's Elvin Yunuszade (29) during the first half of an international friendly soccer match on Tuesday, May 27, 2014, in San Francisco. (AP/Marcio Jose Sanchez)
--

The New York Times has figured out why the US men's soccer team can't hang in international competition — American players are too honest to dive. At least that's the argument in a recent article, "Where Dishonesty Is Best Policy, U.S. Soccer Falls Short."

Whatever you call it — diving, flopping, simulating, embellishing, faking — the tendency to exaggerate contact and feign injury has long plagued the sport, and US players are not immune.

It's great fun to mock soccer's dramatics with compilations set to the Benny Hill theme.

And with parody, like this sketch from Comedy Central duo, Key and Peele, who perfectly capture how it feels when an opposing player gets away with diving against your team.

If everyone in international competition and domestic leagues agreed, "there's too much diving, let's do something about it," that'd be great. Unfortunately, players, fans, countries, and leagues tend to point fingers at everyone but themselves. It's particularly unhelpful when fingerpointing gets mixed up with ideas (often stupid ideas) about national character, culture, or nature.

Take the words of Tab Ramos, assistant to head coach Jurgen Klinsmann. He explained to the New York Times why US soccer players don't dive.

"It’s clear that the American nature is to try and make everything fair," Ramos said, "to try and be fair to the game. That’s just how Americans are.”

Clearly this man has never watched Lebron James — perhaps the most famous and talented AMERICAN athlete in any sport today — play basketball.

We've heard this story before. In 2009 the captain of England's national team, John Terry, said the same thing about English players.

"I can speak about the England lads and I think it is something we don't do," Terry said. "I think we're too honest, sometimes even in the Premier League you see the English lads get a bit of contact and stay on their feet and try and score from the chance they have been given.I think sometimes that honesty goes against us. I think sometimes as a country we're too honest."

These are completely absurd things to say, and the World Cup invites it in a way, as people from around the globe imagine and project what they think defines their country, while making all sorts of assumptions — usually simplistic ones — about what defines others.

American players dive. English players dive. European, African, Latin American, Asian players dive. It doesn't matter where you're from. And when a player dives, it says absolutely nothing about his country, its people, and their culture. Brazilian forward, Fred, took a dive in his team's opening match against Croatia. And so this week we get articles like the one in the New York Times.

Here he is diving in World Cup 2010 against Ghana.

Clint Dempsey earned a yellow card for this 2012 dive against Guatemala in World Cup Qualifiers.

Landon Donovan. Perhaps the greatest player in USA soccer history. This is the Zapruder film of USA soccer dives.

Here are some dives by American-born players in Major League Soccer. They each got fined.

Justin Mapp of the Montreal Impact, who made 8 appearances for the USA between 2005 and 2007.

And we'll end with Jurgen Klinsmann. Yes, he's German, but he's the head coach of the USA team at this year's World Cup, and therefore in charge of modeling "honesty." It might be hard, considering it was his outrageous, pathetic dive that helped Germany defeat Argentina 1-0 to win World Cup 1990. Prepare to cringe.