The secret history of numbers: How math shapes our lives in amazing, unpredictable ways 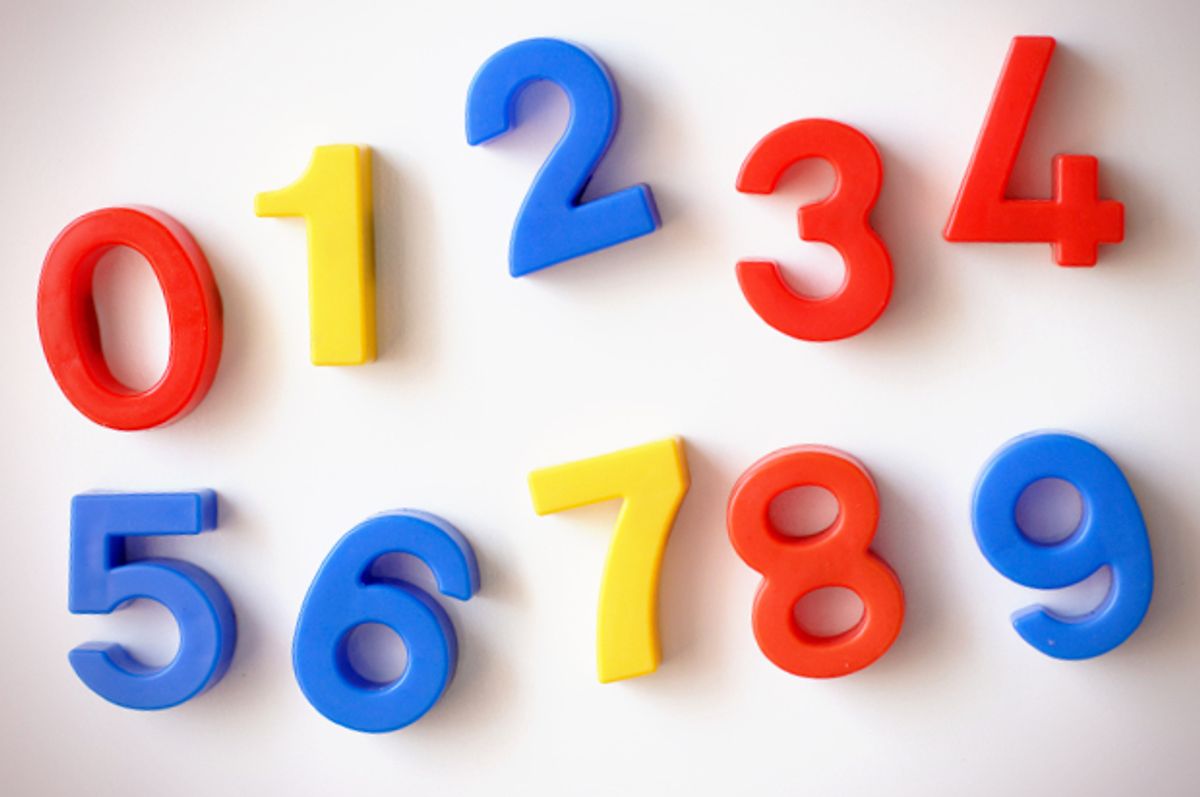 Excerpted from "The Grapes of Math: How Life Reflects Numbers and Numbers Reflect Life."

Numbers were invented to describe precise amounts: three teeth, seven days, twelve goats. When quantities are large, however, we do not use numbers in a precise way. We approximate using a ‘round number’ as a place mark. It is easier and more convenient. When I say, for example, that there were a hundred people at the market, I don’t mean that there were exactly one hundred people there. And when I say that the universe is 13.7 billion years old, I don’t mean exactly 13,700,000,000, I mean give or take a few hundred million years. Big numbers are understood approximately, small ones precisely, and these two systems interact uneasily. It is clearly nonsensical to say that next year the universe will be ‘13.7 billion and one’ years old. It will remain 13.7 billion years old for the rest of our lives.

Round numbers usually end in zero. The word round is used because a round number represents the completion of a full counting cycle, not because zero is a circle. There are ten digits in our number system, so any combination of cycles will always be divisible by ten. Because we are so used to using round numbers for big numbers, when we encounter a big number that is non-round – say, 754,156,293 – it feels discrepant. Manoj Thomas, a psychologist at Cornell University, argues that our sense of unease with large, non-round numbers causes us to see these numbers as smaller than they are: ‘We tend to think that small numbers are more precise, so when we see a big number that is precise we instinctively assume it is less than it is.’ The result, he claims, is that we will pay more for an expensive object if the price is non-round. In one of Thomas’s experiments, respondents viewed pictures of several houses together with their sale prices, which were randomly assigned either a round number, such as $390,000, or a slightly larger, precise one, such as $391,534. Asked whether they considered each price high or low, on average the respondents judged the precise prices to be lower than the round ones, even though the precise numbers were actually higher. Thomas and his collaborators argued that whatever other inferences the respondents were making about why the price was precise – such as that the seller had thought more carefully about it, and so the price was fairer – they still made the subconscious judgment that non-round numbers are smaller than round ones. A tip to readers selling their homes: if you want to make money, don’t end the price with a zero.

The practice of subtracting 1 from a round number conveys a potent message. When we read a number, we are more influenced by the leftmost digit than we are by the rightmost, since that is the order we read, and process, them. The number 799 feels significantly less than 800 because we see the former as 7-something and the latter as 8-something, whereas 798 feels pretty much like 799. Since the nineteenth century, shopkeepers have taken advantage of this trick by choosing prices ending in a 9, to give the impression that a product is cheaper than it is. Surveys show that anything between a third and two-thirds of all retail prices now end in a 9.Though we are all seasoned shoppers, we are still fooled. In 2008, researchers at the University of Southern Brittany monitored a local pizza restaurant that was serving five types of pizza at €8 each. When one of the pizzas was reduced in price to €7.99, its share of sales rose from a third of the total to a half. Dropping the price by one cent, an insignificant amount in monetary terms, was enough to influence customers’ decisions dramatically.

Our response to prices ending in 9, however, is subject to more complex influences than a bias towards the leftmost digit. A price ending in 9 feels like a bargain, even when it isn’t. Eric Anderson of the University of Chicago and Duncan Simester of MIT arranged for the same dress to be priced at $34, $39 and $44 in three otherwise identical mail order catalogues. The dress sold best at $39, rather than the cheaper price of $34. Similar results have been found in other studies: the 9-ending is a cue that the item has been discounted and is therefore a good deal. But the association of 9 with bargains can also mean that a 9-priced product looks cheap, or can give the impression that the seller is somehow manipulating you. An upmarket restaurant, for example, would never dream of pricing a main course at, say, $32.99. Nor would you trust a therapist who charged $99.99 a session. The prices would be $33 and $100, which feel both classier and more honest. Our response to the number 9 is conditioned by a mixture of cultural and psychological factors. Numbers are not impartial and straightforward; they have baggage.

Shopkeepers have other reasons for using prices that end in a 9, or, for that matter, an 8. Tests show that prices ending in 8 and 9 are much harder to recall than prices ending in 0 and 5, since the brain takes longer to store and process them. If you don’t want your customers to remember a price, to prevent them comparing prices, then use an 8- or 9-ending. Conversely, if you do want a customer to remember a price, perhaps to reinforce that it is cheaper than rival products, label it $5 and not $4.98. Traders, in fact, use an array of psychological number tricks to reduce price awareness. For example, a Cornell University study showed that by leaving the currency sign off a menu – so that the price of a dish was listed as 20 rather than $20 – a New York restaurant increased average spend per customer by eight per cent. The ‘$’ reminds us of the pain of paying. Another clever menu strategy is to show the prices immediately after the description of each dish, rather than listing them in a column, since listing prices facilitates price comparison. You want to encourage diners to order what they want, whatever the price, rather than reminding them which dish is most expensive.

Perhaps the most blatant use of number psychology in retail, however, is the display of absurdly expensive items to create an artificial benchmark. The $100,000 car in the showroom and the $10,000 pair of shoes in the shop window are there not because the manager thinks they will sell, but as decoys to make the also expensive $50,000 car and $5,000 shoes look cheap. Supermarkets use similar strategies. We are surprisingly susceptible to number cues when it comes to making decisions, and not just when shopping. In one study, 52 German judges read a description of a woman caught shoplifting, and then rolled a pair of dice, loaded to land either on 1 and 2, or on 3 and 6. Once the dice were rolled, the judges were asked to state whether they would sentence the girl to more or fewer months in prison than the sum of the numbers on the dice, and then to specify the exact sentence. The judges who rolled 3 gave her five months on average, while the judges who rolled 9 gave her eight. The judges were experienced professionals, yet the mere suggestion of a number with no connection to the case determined the length of sentence.

If earnest German judges can be swayed by an irrelevant random number, think about the rest of us. Every time we perceive a number it primes us, influencing our behavior in ways we are not always aware of and cannot always control.

Another response to numbers is affection. After counting, calculating and quantifying with our numerical tools it is common to develop feelings for them. Jerry Newport, for example, loves some numbers like friends. I had not realized the depth of our collective number love, however, until I conducted an online experiment, asking members of the public to nominate their favorite numbers and explain their choices. I was taken aback not only by the level of interest – more than 30,000 people took part in the first few weeks– but also by the variety and tenderness of the submissions: 2, because the respondent has two piercings; 6, because the sixth track on the respondent’s favorite albums is always the best song; 7.07, since the respondent used to always wake up at 7:07 AM, and once her shopping added up to $7.07 in front of the cute cashier at her local shop; 17, because that’s how many minutes the respondent takes to cook rice; 24, because the respondent sleeps with her left leg kicked out like a 4 and her boyfriend sleeps like a 2 on his side; 73, known to fans of 'The Big Bang Theory' as the ‘Chuck Norris of numbers’, because the main character, Sheldon Cooper, points out that it is the 21st prime number, and its mirror 37 is the 12th; 83, because it sounds good to exaggerate with, as in ‘I must have done it 83 times!’; 101, because it is the lowest whole number with an ‘a’ in it; 120, because it is divisible by 2, 3, 4, 5, 6, 8 and 10, providing the respondent with sufficient numbers to count up and down to get to sleep; 159, because it is the diagonal on a phone keyboard; 18,912, because its cadence makes it ‘the most beautiful sounding number in the world’; and 142,857, the phoenix number, because its first six multiples are well-ordered numerical anagrams of itself:

‘Having a favorite number means that you get a little buzz every time you happen to be sitting in seat 53 on a train, or notice that the time is 09:53,’ wrote one respondent. ‘I can’t think of a reason not to have a favorite number.

With the caveat that the survey was voluntary and self-selecting, a bit of fun rather than rigorously undertaken academic research, the data revealed fascinating patterns in favorite number choices.

Firstly, the span of our number hug is huge: 1123 individual numbers from 30,025 submissions. There were votes for every whole number between 1 and 100, and 472 of the numbers between 1 and 1000. The lowest whole number that failed to pick up any votes was 110. Surely the world’s least-loved number?

Roughly speaking, we like single digits best, and the bigger a number is, the less we like it. The table also reveals a shocking indifference towards round numbers. The numbers from two to nine are all in the top ten, but ten is way down in 23rd place, twenty is in 50th and thirty in 69th. Ten is the cornerstone of the decimal system, yet it is not very lovable, possibly because it is always prostituting itself as an approximation.

Some numbers are chosen for their numerical properties, such as the phoenix number on p. 14, and also the constants π and e, which we will look at much more closely later in this book. Usually, however, a number is chosen for a personal reason, most commonly because it is the day of the month we were born. Yet the distinction between a numerical and a personal reason is not clear-cut, since there are some numbers that are rarely chosen as favorites even if the person was born on that day. For example, if you were born on the 10th of the month, you are six times less likely to choose 10 as your favorite number than you are likely to choose 7 if you were born on the 7th of the month. If you were born on the 30th you are forty times less likely to choose 30. Some numbers evidently make better favorites than others. (One of the reasons I became so curious about favorite numbers is because I don’t have one, and I couldn’t quite believe that so many other people felt so passionately about them. Now I blame my lack of a favorite number on the fact that I was not born between the 2nd and the 9th of the month.)