Wal-Mart and Exxon have this in common: Big checks, famed nonprofits and corporate greenwashing 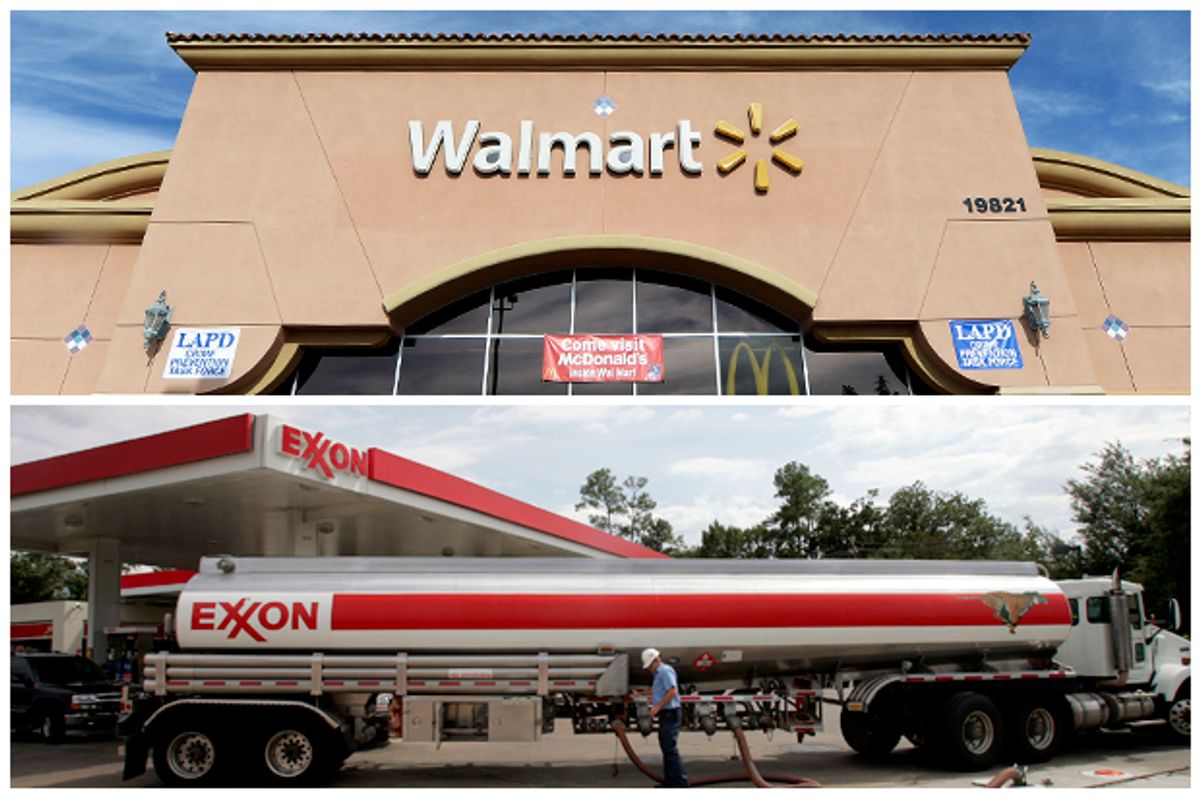 Excerpted from "Protest Inc.: The Corporatization of Activism"

In 2012 Time magazine reported that the U.S. branch of the Sierra Club – one of America’s oldest conservation organizations – had accepted more than $25 million from the natural gas industry from 2007 to 2010. Most of the donations came from Chesapeake Energy, one of the world’s largest gas drillers and a promoter of “fracking,” or hydrologic fracturing of rock formations to increase oil and gas yields. Before then many supporters had been wondering why the Sierra Club was taking a pro-gas stance. Author Sandra Steingraber raged after the news broke of the Chesapeake Energy donations: “It was as if, on the eve of D-day, the anti-Fascist partisans had discovered that Churchill was actually in cahoots with the Axis forces.”

The Sierra Club is not unique. NGOs are reaching out to big oil and gas like never before. Antony Burgmans, a former CEO of Unilever and a current non-executive board member of British Petroleum, sits on the board of WWF International. BP has also donated millions of dollars to The Nature Conservancy, which many critics saw as responding lamely to the BP oil spill in the Gulf of Mexico in 2010. Coalitions of environmental groups and corporations to address issues such as climate change are extending partnerships. The U.S. Climate Action Partnership (USCAP), for instance, brings organizations such as Natural Resources Defense Council, The Nature Conservancy, the World Resources Institute, and the Environmental Defense Fund, together with oil companies such as Shell, as well as DuPont, Dow Chemical, Chrysler, Johnson & Johnson, Rio Tinto, PepsiCo, General Electric, and Weyerhaeuser.

Similarly, despite past misconduct – such as Shell in the Niger Delta in the 1990s – and despite ongoing worldwide campaigns against oil and gas extraction – such as against Chevron in Ecuador – social justice groups are also partnering with multinational oil and gas companies. The Amazon Defense Coalition is suing Chevron for “environmental crimes.” Still, Chevron is managing to find many NGOs willing, even eager, to partner. These include NGOs dedicated to improving socioeconomic conditions in developing countries, ranging from international NGOs (e.g., Save the Children) to community organizations (e.g., Women’s Initiative for Self-Employment and the Association of Business Women of Kazakhstan). Likewise, ExxonMobil’s NGO partners range widely and include Africare, the Centre for Development and Population Activities, the Cherie Blair Foundation for Women, International Center for Research on Women, and Vital Voices.

Multistakeholder coalitions are further linking social NGOs to the oil and gas industry. To increase the transparency of oil and mining revenues, the Extractive Industries Transparency Initiative includes executives from companies such as Chevron and Shell and activists from NGOs such as Transparency International, Global Witness, and Oxfam. The UN Global Compact brings hundreds of NGOs, including WWF and World Vision, into partnership with oil and pharmaceutical companies, as well as, as we will document later in the chapter, big-box retailers and brand manufacturers.

Many social NGOs continue to avoid accepting money directly from multinational oil and gas companies. Barbara Stocking, former chief executive of Oxfam (Great Britain), explains: “We won't take any money from any of the extractive industries, except maybe their foundation arm and only then in an emergency.” Social activists, as Stocking says, are more willing to accept corporate money indirectly, not just through foundations, but also through initiatives such as the Global Fund to Fight AIDS, Tuberculosis and Malaria. This Global Fund, which distributes millions of dollars in grants to NGOs, receives considerable corporate funding, including a $30 million donation from Chevron between 2008 and 2010. We could list an almost endless number of other examples: Shell, to add one more, is giving millions of dollars a year to the Global Alliance for Clean Cookstoves.

In 2008 Shell acknowledged the following “dilemma” for future growth: “How do we increase global reach and build on global brands while recognizing and responding to the popular antipathy towards big business and globalization?” Partnering with activist organizations has been a vital part of the answer to this question for every oil and gas company. And oil and gas revenues have continued to soar since 2008. Royal Dutch Shell, ExxonMobil, and BP were ranked first, second, and fourth respectively on the 2012 Fortune 500’s ranking of the world’s biggest companies in terms of revenue (Walmart was third). Most activists remain wary of the ever-rising power of big oil and gas. A few activists still rail against practices they see as corrupt, unjust, and unsustainable. And yet, even with disasters such as the 2010 BP oil spill, oil and gas companies are navigating the “antipathy” toward more growth remarkably well. Who ten years ago would have thought big oil and gas would become such an important partner and funder of NGOs worldwide?

Partnerships between NGOs and big-brand companies are developing even faster than those with energy and pharmaceutical corporations. Environmentalists have led the way, collaborating with, and accepting money from, big-box retailers and brand manufacturers. The Environmental Defense Fund blazed a trail in 1990 by partnering with McDonald’s to phase out the restaurant chain’s Styrofoam packaging. Today such partnerships are ubiquitous. IKEA works with WWF as a “marketing partner,” providing funding through the Global Forest and Trade Network to “create a new market for environmentally responsible forest products.” Conservation International works with Starbucks on sourcing coffee beans and with Walmart on tracking the sources of the company’s jewelry products. Monsanto and The Walt Disney Company are two other “featured” corporate partners of Conservation International (as of June 2013).

Executives from these companies also sit on the boards of environmental NGOs. As of June 2013, the board of trustees of the Natural Resources Defense Council’s includes Robert J. Fisher, past Chairman of the Gap board of directors, and Alan F. Horn, current chairman of The Walt Disney Studios. Neville Isdell, former CEO of Coca-Cola, is chairman of the board of the U.S. branch of WWF (known in the U.S. as the World Wildlife Fund) (as of June 2013). Rob Walton, chair of Walmart, also chairs the executive committee of Conservation International’s board of directors, which, as of June 2013, includes Paul Polman of Unilever (current chief executive), Heidi Miller of JPMorgan Chase (retired former president), and Orin Smith of Starbucks (retired former CEO).

Social and human rights organizations have generally been less receptive to partnering with big-brand companies. But this is changing, too. The Fair Labor Association, for example, connects NGOs such as the Global Fairness Initiative, Maquila Solidarity Network, and Human Rights First with companies such as Nestlé, H&M, Nike, Adidas, Apple, and New Balance. Other social NGOs have negotiated bilateral deals with big brands, such as the Human Rights Campaign has done with Microsoft, American Airlines, and Coca-Cola, or Oxfam has done with Starbucks and Unilever. As with environmental NGOs, the presence of big brands is also increasing on the boards of social justice organizations. The Board of Directors of the U.S. branch of one of the world’s largest humanitarian NGOs, Care International, for instance, includes Emery Koenig (executive vice president of Cargill), Eduardo Castro-Wright (former vice chairman of Walmart), and Alex Cummings (VP and chief administrative officer of Coca-Cola) (as of June 2013).

Big-brand companies have even begun to form, fund, and manage coalitions with NGOs, many around gender and women’s rights. Nike has led the way by launching and funding “The Girl Effect,” a support network for nonprofit efforts to help adolescent girls living in poverty in developing countries. Nestlé and others are funding the UN’s Every Woman Every Child program, what the UN calls an “unprecedented global movement” of business, governments, and civil society groups to improve the healthcare and living conditions of women and children worldwide. The International Business Leaders Forum (comprising over 150 multinational corporations) is connecting executives from Nike, Shell, and many others to leaders from NGOs such as Transparency International, Amnesty International, and Human Rights Watch. And the World Bank’s “Gender Action Plan” to enhance economic opportunities for women is linking NGOs to firms such as Unilever and Nike. Other transnational governance and development institutions are also facilitating NGO-business cooperation. The UN Global Compact is connecting companies such as Nike, Bayer, and DuPont to social and environmental projects across the developing world.

UN Secretary-General Ban Ki-moon is full of praise for these corporate partners. “Companies are often treated with suspicion when they enter global development, but they are playing a central role in improving the lives of women and children. These are smart decisions – visionary leaders recognize the value of investing in the health of women and children.” These “visionary” executives can also open doors to the rich and famous.