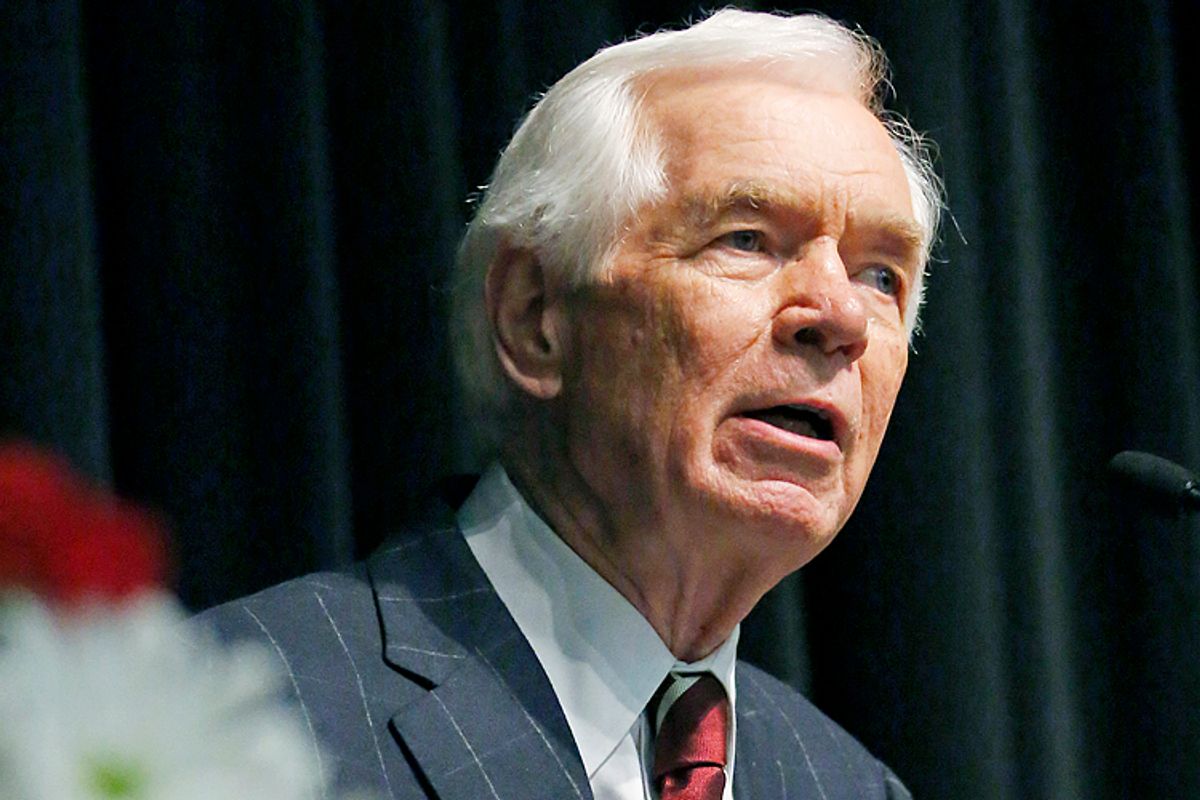 The Mississippi GOP Senate race has already been a real ... well, it's been something. Tea Partyers are being arrested for breaking into nursing homes or accidentally getting locked inside government buildings where ballots happen to be held. Poor old Southern gentleman Sen. Thad Cochran has little idea what the hell is going on at any given moment and is relying on lobbyists to pitch pork to voters for him. For the most part, it's been a quaint, entertaining tribute to old-timey Southern political high jinks.

Unfortunately, the last moments of the primary campaign, which concludes in tomorrow's runoff between Cochran and state Sen. Chris McDaniel, are also closely resembling old-timey Southern political high jinks -- only now, the less entertaining parts. The race is getting mighty race-y.

Polls of Republican voters indicate that McDaniel, the Tea Party challenger, is likely to pick off Cochran tomorrow. This has been the understood dynamic of the runoff from the get-go. The Cochran campaign and its well-funded backers, therefore, have been appealing to Democrats -- which in Mississippi mostly means African-Americans -- to cross over and vote for Cochran, who's done a lot for the state over the years. The rule is that any Democrats who did not vote in the June 3 Democratic primary are eligible to vote in tomorrow's GOP runoff. The Cochran campaign and affiliated PACs have gone about reaching out to black community leaders.

It's unclear how well the Cochran strategy will work, but Team McDaniel is concerned and applying tangible, in-person resistance. The Senate Conservatives Fund, one of McDaniel's biggest outside backers and a group that's desperate for a Tea Party victory over an incumbent senator, has announced that it will be deploying "poll watchers" (!) to the state to monitor the activity of black voters. The New York Times reports:

The groups will deploy observers in areas where Mr. Cochran is recruiting Democrats, Mr. Cuccinelli said. J. Christian Adams, a former Justice Department official and conservative commentator who said he was advising the effort, described the watchers as “election observers,” mostly Mississippi residents, who will be trained to “observe whether the law is being followed.”

We'd like to reiterate what's going on here: Conservatives will be training "poll watchers" in Mississippi to monitor the activity of black voters. It's amazing, and sad, to see how quickly things have devolved into awful Mississippi stereotypes here. Just a couple of weeks back, Thad Cochran's team decided, hey, we should try to appeal to black voters. And almost instantly we have a volunteer army of "election observers" descending upon black polling sites. The Times writes that the effort "evokes memories of the civil rights struggles of the state’s past." No shit.

What will be the poll watchers' argument, anyway? Are they just going to show up at polling stations and wave their hands around to scare people away? Not quite. They're going to tell Democratic voters that if they vote in the Republican runoff while intending to vote for the Democratic candidate in the general election, they'll be violating the law. J. Christian Adams, the former Justice Department official who's "advising the effort," cites a strange provision in Mississippi law. From Breitbart News, an outlet one would generously describe as McDaniel-friendly:

J. Christian Adams, a former Civil Rights Division attorney at the Department of Justice with experience litigating election law cases in Mississippi, said a law there prevents people from voting in the primary for candidates they don't plan to support in the general election.

The Mississippi law Adams cites, MS Code 23-15-575, states: “No person shall be eligible to participate in any primary election unless he intends to support the nominations made in which he participates.”

As election law professor Rick Hasen explains, though, the state attorney general has interpreted the law to mean that an observer may not challenge a voter unless that voter "openly declares that he or she does not intend to support the nominees of the party." So we'll have "poll watchers" coming down to warn voters about breaking the law when they won't be, unless they stand up on a soapbox and sing about their intentions to vote for Democrat Travis Childers in the fall. As Hasen writes, "That’s very troubling and I hope DOJ has some observers now heading down there too."

It's J. Christian Adams' involvement in the effort that really ices the absurdity of the situation. Adams is the former Justice Department lawyer with the Civil Rights Division who blossomed into a conservative star by "blowing the whistle" on the division's handling of the New Black Panther Party "scandal." You're forgiven if you forget this particular episode of Obama-era Fox News hysteria. On Election Day 2008, a video was shot at a Philadelphia polling place depicting two morons calling themselves "the New Black Panther Party" standing outside and looking intimidating. The cops were called and they left. The Civil Rights Division decided that it wasn't worth making a big case out of the incident. Adams resigned and accused the CRD of bias in applying voting rights law when the perpetrators were black. Never minding the fact that most of the voters at that Philadelphia polling station were also black, Adams has since occupied the "white people are the real victims of voter intimidation" slot in the right-wing apparatus.

So that's where the conservative movement is now: getting a former member of the DOJ's Civil Rights Division to manage an effort in which "poll watchers" in Mississippi warn black voters that they may be violating the law by casting ballots in tomorrow's runoff. It's ugly.