Ladies: Now you can free your nipples without going topless

Want to support the #FreeTheNipple campaign, but not ready for full exposure? Wear the Ta-Ta Top 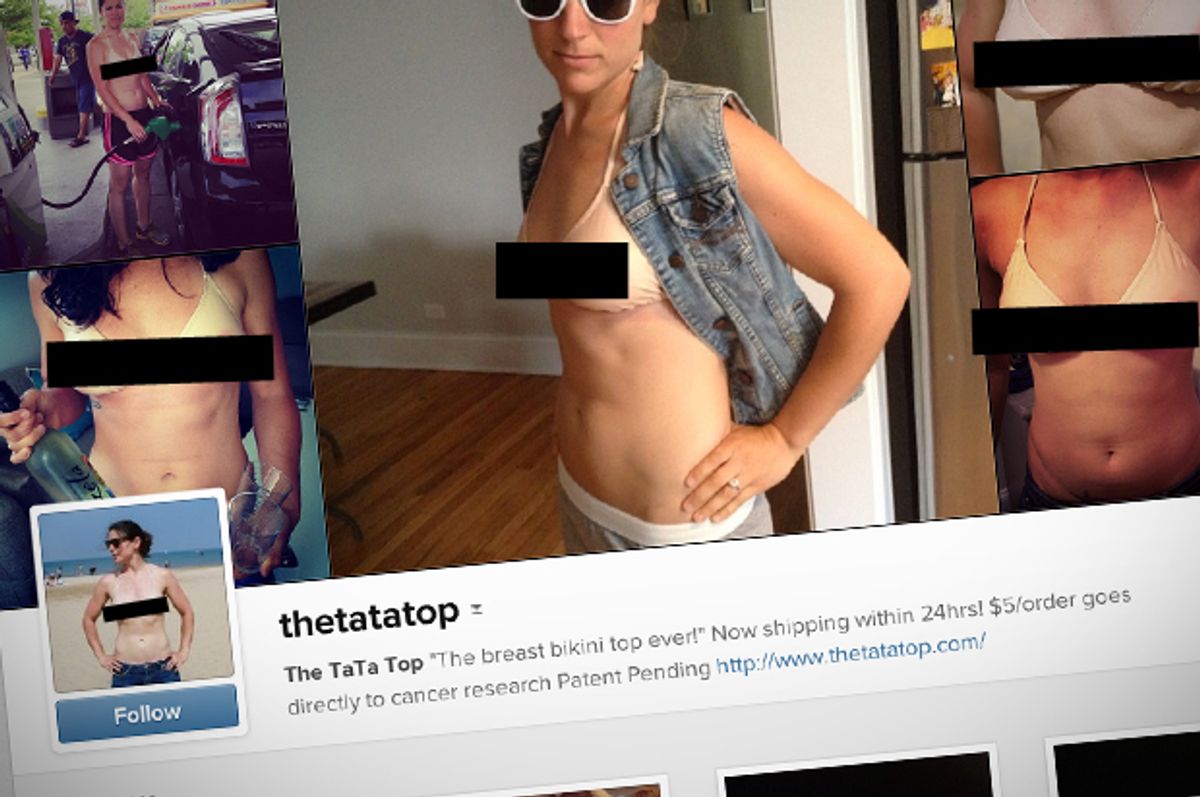 Ladies: If you want to take a stand against censorship and fight for gender equality, but may not be ready to pull a Scout Willis and walk through the streets of New York topless, there is now a bikini top that lets you bare all without baring anything at all. Meet the Ta-Ta Top, a bikini top fashioned after the female body, which features a nipple on each cup. It is pretty darn realistic: If it sounds like it’s a gag gift from Spencer’s, the favorite store of man-children everywhere, rest assured that it’s not! Rather, the Ta-Ta Top was designed by two feminist ladies, Robyn Graves and Michelle Lytle, and is meant to make the sight of the female anatomy something ordinary -- like, oh, say, the male nipple. Better yet, $5 from every $28 purchase goes toward the Lynn Sage Cancer Research Foundation, a breast cancer charity. Hopefully, as Lytle told Salon, when people are confronted with the Ta-Ta Top, it won’t be a “big deal when you see someone topless."

The Ta-Ta Top is an unofficial extension of the Free The Nipple campaign, recently popularized by Willis and launched by filmmaker Lina Esco to fight for “equal rights for men and women, a more balanced system of censorship, and legal rights for all women to breastfeed in public.” As Willis has pointed out, Instagram censors content seemingly willy-nilly, keeping up sexualized images while taking down anything that exposes the female nipple, no matter how bland. (In fact, that’s why this post had to censor our picture -- to make sure we comply with parent company Facebook's policy.) Censorship of the female nipple sends the message that it’s something salacious, provocative and more inappropriate than even the graphic violence we see on TV and in the movies. Men can free their nipples without scandal (though this was not always the case!), but breast-feeding in public is, in five states, a criminal offense (and female toplessness is a crime in more than 30).

The bikini top, which made its debut May 26, is only available via TheTaTaTop.com. There are about 650 tops currently in stock.

Lytle is aware that it’s not just feminists who will flock to this product (Enter again: Spencer Gifts' customers), and anticipates drunk kids at the Jersey Shore and Venice Beach might be interested in it, too. “I don’t think a lot of people think about exactly how serious this issue is,” she said. But that’s not a deterrent to her. “Even if they’re not buying it to champion the cause,” said Lyte, “they’re still supporting the cause.”

“Personally, I think if you’re going to buy this and wear it because it’s funny and for the shock value, and someone asks you about it, you’re not going to rattle off the whole history of feminism,” she continued, explaining, “That’s totally fine ... I think that the important thing about this product is that, if people look around and see this everywhere, then who cares if you can legitimately be topless? Because you’re already seeing it.”

She has a point. The top is realistic from “as close as 10 feet” for white people (but don’t worry, women of color, there are at least two more skin tones coming). The company has already had several run-ins with Instagram, and is fighting back by pointing out how absurd it is to censor an image likeness of a nipple: In the end, Lytle says, censorship of the female body  should be a “non-issue.” She’s hoping to turn the top into “an opportunity for people to look at things in a different way and not judge things” based on how they’ve been raised or the culture they’ve grown up in.