SCOTUS' upcoming Hobby Lobby decision: What you need to know

Court's ruling could come as soon as today (or later this week). Here's the good, bad, ugly -- and really ugly 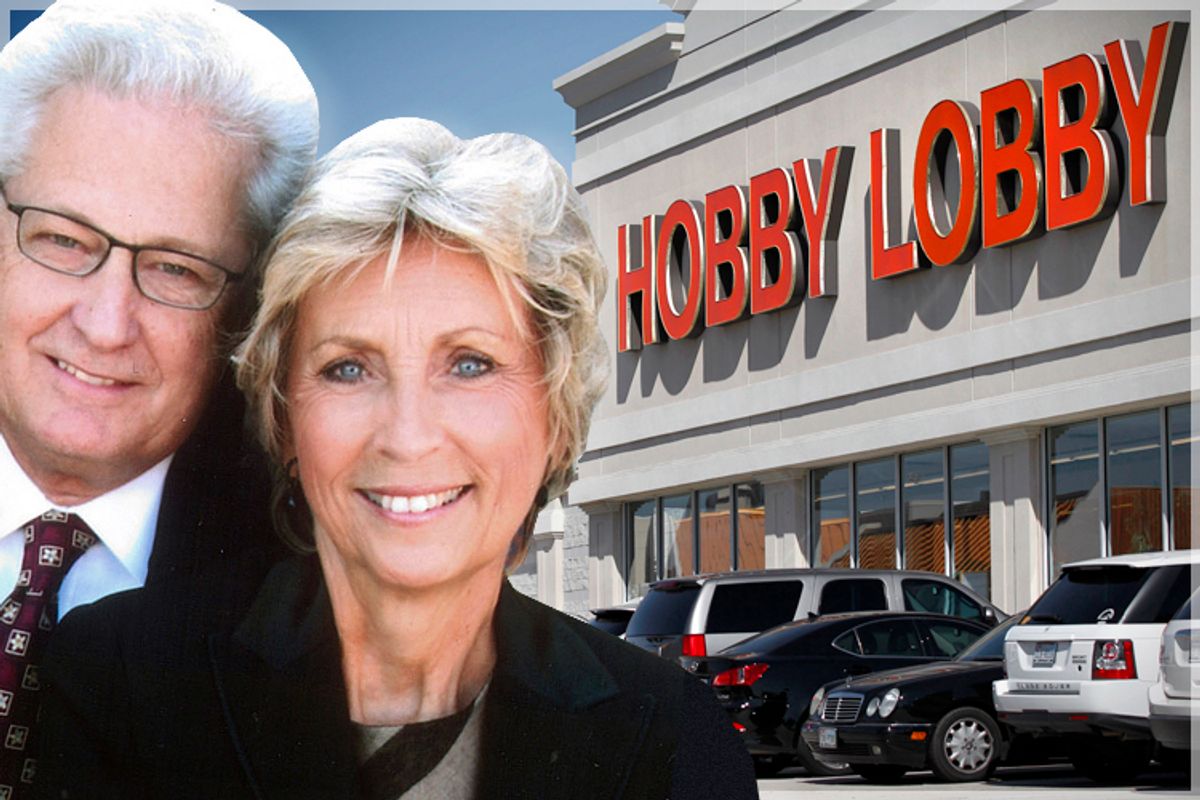 The Supreme Court could be hours -- or days -- away from issuing its opinion in Sebelius v. Hobby Lobby Stores, Inc. -- one of the most closely watched cases the high court has seen this year. While plenty of people have plenty of theories about how the justices will decide, Salon reached out to Emily Martin, vice president and general counsel for the National Women's Law Center, to talk through possible outcomes.

There are a few different ways the court could handle the case -- from the good to the neutral to the very, very bad -- and each would have serious ramifications. For the employees of Hobby Lobby -- and the rest of us.

In your opinion, what is the best possible outcome we could hope for from the court? I know there are a number of opinions the court could issue that would be positive, but is there a scenario that you would consider a total home run?

There are a lot of ways that the United States could win this case. Hobby Lobby would have to pass a lot of tests in order to succeed. It seems to me that the best case scenario is if the court really makes clear that corporations don’t have the right to pray, that corporations can’t exercise religious rights and that therefore this analysis of whether a particular requirement burdens the religious rights of a corporation is just nonsensical.

Now, there are a lot of other ways that the U.S. could win the case, and all those ways would have a very good result. But I think there certainly would be a value in saying clearly that these cases are basically off the table. That Congress, in passing the Religious Freedom Restoration Act, didn’t intend for corporations to be exercising religious rights in this way.

It might do that by pointing out that employers don’t have to provide health insurance at all. If they don’t provide health insurance and they’re larger employers like these employers, they do have to pay a tax -- a penalty, basically. That was an issue that court paid a lot of attention to in oral arguments, the notion that if providing contraception is so objectionable to Hobby Lobby and Conestoga Wood, maybe they should just get out of the health insurance business, and that’s an option that they have. If they want to do that, they just have to pay a tax. And frankly, the cost of that tax is probably lower than the cost they already bear by providing health insurance. In other words, it would just be cheaper for them to get out of the health insurance business entirely. So the court could say, "This requirement isn’t really a requirement -- you can get out of it whenever you want; there’s just some price associated with it. And therefore, there’s no substantial burden on your religious exercise."

Or the court could say that even if it finds that there’s a substantial burden on the corporation religious exercises, it’s still permissible because the contraceptive coverage requirement forwards compelling interest in women’s health and women’s equality and does so in the least restrictive means. The contraceptive coverage requirement is crucial to women’s health and to women’s equality and it definitely forwards those compelling interests.

There a lot of decision points where if Hobby Lobby loses on any one of them, it’s still an overall victory for the women employed by Hobby Lobby.

And how would these findings resonate, politically and culturally?

It would be incredibly important for the Supreme Court to say that religious liberty is not about imposing your religion on others, that’s not what religious liberty means. And certainly it’s not about imposing your religion on others in a way that harms others. I think that would have cultural echoes, since this conversation is going on in various contexts around the country, not just in contraceptive coverage case but also in the fights that we are seeing in state legislatures about whether business should have the right to discriminate against gays and lesbians, for instance. So I think that affirmation of the idea that that is not what religious liberty means, that it’s a shield rather than a sword that allows you to impose your beliefs on others, would be a very important principle for the court to affirm.

That being said, even a victory will probably not be the end of the conversation because we have seen that the opponents of women’s healthcare and contraception are very motived. So I think that even if there is a win, then we will continue to see a legislative fight  to change the Religious Freedom Restoration Act or the contraceptive coverage requirement, to change the result. And so, unfortunately, I think that this fight about whether women will continue to have access to comprehensive healthcare, including contraceptives, is a fight that will continue no matter what the result in the Supreme Court is.

Could the justices potentially punt on some of the broader questions raised by the case? Is there an opinion that could be considered a dodge on some of these issues?

And what about a worst-case scenario? The makeup of this court seems sort of amenable to the idea of corporations being people. What would the consequences potentially be?

Certainly any loss which says that Hobby Lobby could carve out one part of healthcare for its employees and leave employees to bear the cost of that really essential healthcare would be extremely troubling. Things that we should be looking for is how the Supreme Court treats the fact that there are third parties -- that there are women employees -- that have rights that are affected by whatever it is that Hobby Lobby does. How those rights of the women weigh when the Supreme Court is thinking about the assertive religious right claimed by Hobby Lobby.

Of course, I hate to be in the business of speculating about bad things that the court could do, but one of the things I would be very troubled by is if the court says it doesn’t matter. That it doesn’t matter if Hobby Lobby’s religious exercise harms third parties, and specifically harms women employees in a really significant way. If they say, "Nothing we can do about it, that’s Hobby Lobby’s religious right." I think that would be a very disturbing principle to be created for really the first time in law. That’s never been what we’ve understood religious freedom to mean, and I think that would be a very troubling principle. And certainly if the court says that any corporation can exercise religion, that there are no limits to a corporation’s right to exercise religion, that opens the door to a variety of really troubling claims.

Not just the claims in this case, which are disturbing enough, but claims that a particular corporation doesn’t want to cover vaccinations or blood transfusions or lots of other sorts of healthcare, which are rightly understood to be essential and basic and fundamental. Or going beyond that, you can imagine corporations saying -- and corporations have said this in the past -- that they have a religious objection to paying women as much as men, for example. Or to treating women as the heads of households, and providing family health insurance to women; that only men should be the heads of households. So it opens the door to lots of disturbing violations of the rights of workers in the name of religion.

That decision really would give a lot of very disturbing force and momentum to the idea that you can use your religion to harm others, and that would be a very new principle in American law.

What do you think the response should be if we have a scenario in which Hobby Lobby is empowered to use its so-called religious liberty as a blunt instrument? How does that shift the landscape? What has to come next?