Don't buy the hype about the "revolutionary" startup. It's no less exploitative than any other enterprise 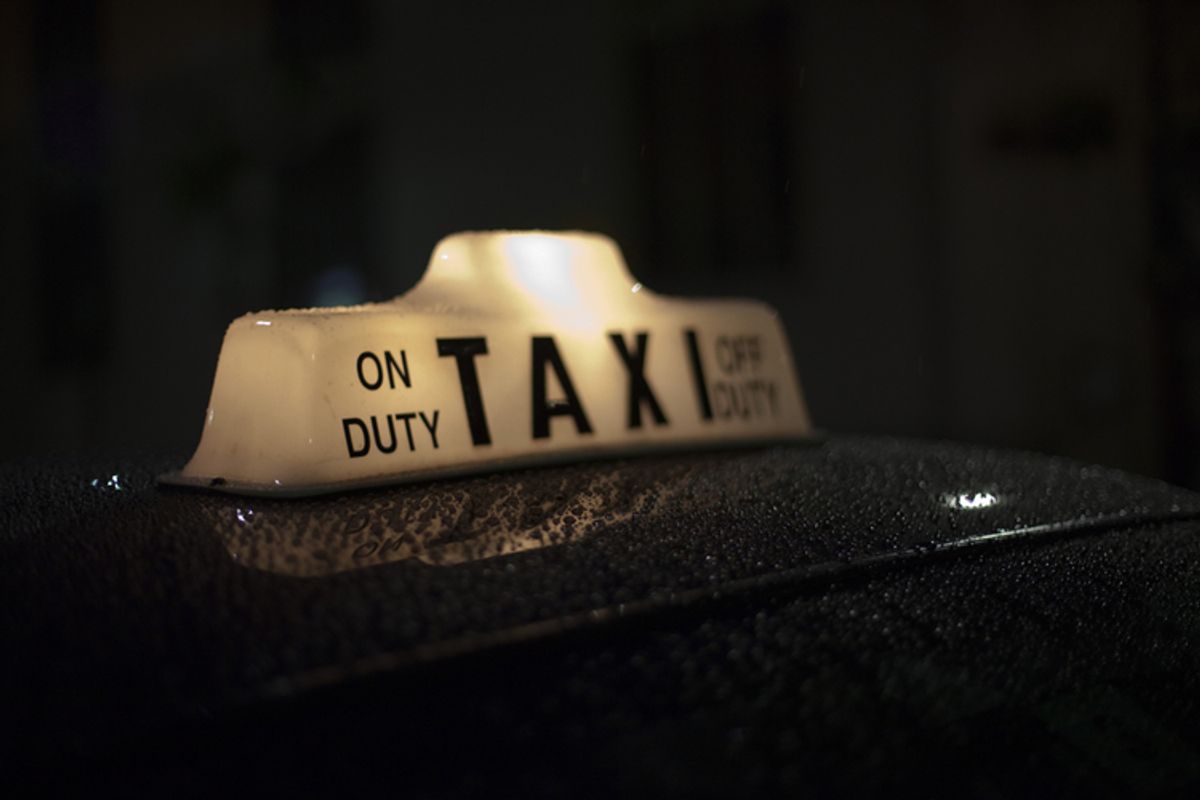 Now that Uber has received an $18.2 billion valuation from investors, making it worth more than rental car giants Hertz and Avis combined, it would seem the ride-sharing company’s days as a scrappy young tech startup are done. But in the days since the valuation was made public, the Uber hype machine—which insists that the company is revolutionizing the monopolistic, overly bureaucratic taxi industry—has gone into overdrive.

In one of the eight articles on Uber that the New York Times has published in the last two weeks alone, Farhad Manjoo refers to the company as “the hottest, most valuable technology start-up on the planet.” In the opinion of Mitchell Moss, director of the Rudin Center for Transportation at New York University, “Uber is transforming mobility in big cities and has been one of the great innovations in transportation in the last decade.”

With its revolutionary “disruptive” potential, app-based technology and clever marketing—one campaign involved a kitten delivery service in honor of National Cat Day—the service is almost a parody of the quintessential millennial company. But make no mistake: despite the populist, user-focused language of Uber promoters and company reps, the ride-sharing service is a prime example of the neoliberal economic model at work. Uber’s brand of tech sector neoliberalism relies on deregulation, an absence of government oversight and a healthy amount of political spending to sway the rules in their favor. By adhering to the narrative of innovation, efficiency and market disruption, for the good of the people, powerful tech companies can avoid discussing other topics: how their services compromise existing industries, fair labor practices, the security of passengers and drivers. Here are five ways that Uber is just like any other exploitative capitalist enterprise,

Uber and other ride-sharing services have fought for an astonishing lack of regulation in most of the cities where they operate. Unlike traditional taxi drivers, Uber operators don’t have to file for licenses, adhere to fixed rate standards, or comply with other county and state regulations that determine when and how a for-hire car can be booked. According to Uber founder and CEO Travis Kalanick, who has referred to the taxi industry as a “protectionist scheme,” these sorts of rules serve as outdated, industry-friendly ways of cutting out competition.

But, as Ralph Nader would tell you, auto regulations are essential for ensuring quality of service and protecting the safety of passengers and drivers alike. In New York City, for example, taxi drivers go through a multi-month training and examination period, and face high standards for continued licensing, including fines, penalties and even arrests for violations. Uber drivers are unburdened by these requirements, needing only a driver’s license, a background check and an insured car to get on the road. This ease of entrance to the field and lack of oversight makes it much more difficult to ensure that drivers are up to snuff and to monitor illegal pickups, a longstanding headache for regulatory officials.

In airports and large urban centers across the US, independent drivers haggle with customers for rides in their personal vehicles, but with the growing popularity of Uber, it is more difficult to determine who is a freelance agent illegally turning a profit and who is a ride-share operator. According to Bhairavi Desai, executive director of the New York Taxi Workers Alliance, NYC’s union for yellow taxicab drivers, “When it’s just individual drivers doing these pickups, you can educate people and build a public consciousness around that, but that’s much harder to do with a large corporation with a multi-million-dollar PR apparatus at its beck and call.”

Alongside an absence of regulation comes a lack of accountability. While Uber maintains a $1 million commercial liability policy, the company’s approach to insurance coverage is grounded in the concept of plausible deniability. According to its website, “this policy provides up to $1 million in coverage for each and every incident that occurs from the time a driver has accepted a trip and is en route to pick up passengers or is transporting passengers to their destination.”

Yet if the app isn’t turned on, or if an accident occurs while a driver doesn’t have a passenger in the backseat, it is not considered an official Uber ride and insurance won’t cover any bodily injury or vehicular damage. The most disturbing example of this is the New Year’s Eve accident that killed 6-year-old Sofia Liu at an intersection in San Francisco’s Tenderloin neighborhood. An Uber driver, Syed Muzzafar, hit Liu with his vehicle, but the company argued he was not using the app at the time and it has no responsibility to ensure him, given that all Uber drivers are independent contractors rather than employees.

Uber’s deferral of responsibility has also been thrown into sharp relief by several prominent cases of sexual assault over the past few years. A 20-year-old woman in Washington, DC accused an Uber driver of raping her in her Northwest Washington home. A female LA club-goer was allegedly kidnapped by an Uber driver and taken to a seedy motel. Not to mention all the incidents in which women have reported being chatted up, groped, threatened or otherwise made to feel uncomfortable when riding alone in Uber vehicles. In these cases, Uber’s default response has been to issue statements affirming that they deactivate any driver accused of criminal activity, yet the company can legally pass the buck in a way traditional taxi companies cannot, with the simple excuse that the accused individuals aren’t Uber employees.

3) The Perils of Surge Pricing

One of the most beloved aspects of the Uber model is the automated paying process. At the end of a ride, passengers can hop out of the car without stopping to count out bills or mentally calculate a tip. Instead, riders’ credit cards are billed directly. Yet there is a flipside to this ease of payment: the ease of ripping people off.

As any Uber rider knows, during peak pickup hours, holidays and periods of inclement weather, the company automatically raises its prices to attract more drivers to accommodate this spike in demand. So the same crosstown ride you take at 5pm could cost five times at much on your return trip at midnight. In one notorious incident a Los Angeles woman was charged $357 for a 14-mile one-way trip to Hollywood. Though customers receive notice when making a reservation that prices have increased, “surge pricing”—especially if customers aren’t paying attention—seriously detracts from the utility and accessibility Uber claims to espouse. The company is meant to be a transportation alternative, offering options to people at odd hours or in off-the-beaten-path locations, but it operates as a monopoly in this market. Yes, you can get a cab home at 2am when no trains or buses are running, but you will pay for it, dearly.

The lack of regulation, oversight and affiliation with management leave Uber drivers uniquely vulnerable. As Bhairavi Desai of the New York Taxi Workers Alliance points out, Uber markets itself as a side-job for urban dwellers, not a full-time form of employment. Originally, the company was intended to allow people who already owned a car and happened to be on the road the chance to pick up a few passengers and make some extra bucks. Yet in cities like San Francisco and New York, where ride-sharing services are most firmly entrenched, many Uber drivers drive as their full-time job. Despite their geographical know-how, experience and critical role in spreading the popularity of the app, under this unspoken arrangement Uber drivers are technically not considered “workers” at all. This means they don’t receive any of the protections afforded to full-time laborers, such as workers’ compensation or corporate representation.

According to Desai, “Ride-share companies like Uber are informalizing driver labor. Throughout the world, whenever workers’ labor is deprofessionalized, they lose protections and rights….As much as Uber supporters talk about their model being something modern, I really think it seems quite backwards as far as workers’ rights are concerned.”

Needless to say, traditional taxi drivers—particularly those in cities like New York and London, where the training and examination standards are the most strict—have been economically undercut by Uber drivers, who don’t have to waste precious time or gas cruising around looking for passengers. Earlier in June, taxi drivers across Europe erupted in protest, blocking traffic in some of the continents’ largest cities to protest the advantages held by app-based services that aren’t subjected to the same fees and regulations as the established taxi industry.

A key part of Uber’s egalitarian, modern image is the idea that it is grassroots-supported, providing a data-driven, useful service to thousands of hip young urban professionals who need an easy way to get around town. This public face makes it easy to forget that it is a multi-billion-dollar, multinational company with an enormous financial incentive to “disrupt” the traditional taxi industry. Beyond hiring political fixers to help overcome regulatory roadblocks in cities from Denver to Houston, Uber retains the services of the Franklin Square Group, a DC-based tech lobbying firm, in order to help sway public opinion in its favor.

In Seattle, the cradle of the tech industry, the public battle over ride sharing has been particularly hostile. Socialist city councilwoman Kshama Sawant and other local officials have argued in favor of a cap on the number of ride-share drivers allowed in the city as a means of protecting traditional taxi drivers. In response, the ride-sharing services launched a massive public relations campaign and lobbying effort linked to Seattle’s reputation as a center for tech innovation. In June, Uber and Lyft got their way, with a first-in-the-nation agreement that lifts the cap of 150 drivers per service in the name of customer satisfaction and competition. According to Democratic mayor Ed Murray, by eliminating the cap on for-hire drivers, “We have deregulated a highly regulated monopoly.”

For now, there is no real danger of Uber wiping out the traditional taxi business. Ride-sharing companies work best in large urban centers that already have a wealth of transportation options, like the Bay Area and New York City; they aren’t designed to operate in suburbia or even mid-size cities with a smaller customer base. But Uber and its copycats will only expand their reach in the coming years, and progressives shouldn’t swallow everything they hear about the radical innovation of ride sharing. After all, when Uber is being defended by the likes of Michael Bloomberg—who once claimed he would “fucking destroy” the taxi industry—while Kshama Sawant and unions are arguing for the protection of drivers, maybe the rush to advance "innovative" ride-sharing services merits rerouting into the slow lane.