I still blame myself for my sister's addiction and suicide

Two years ago this week, I learned that Christin had overdosed. I was the one who gave her her first hit 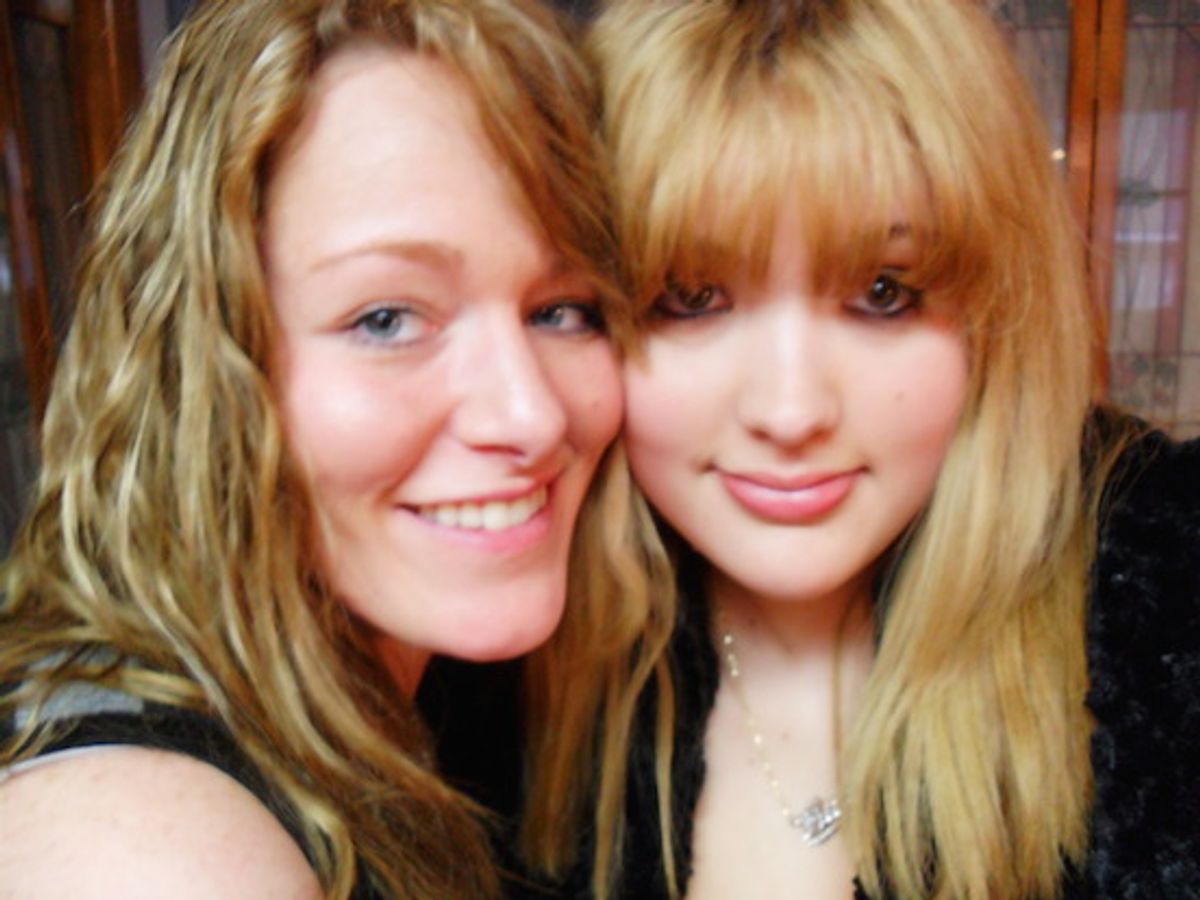 The weeks leading up to my brother’s wedding were hectic—frenzied even. I was 21, and had just returned from a year studying abroad. After months of not seeing my family, I’d come home with a partner in hand, whom no one had met or known much about. To introduce a serious boyfriend to your very conservative, Colombian mother is no easy feat, and everyone’s anxiety before the “big day” made for a general mood of distress and foreboding.

In those first weeks back in New Jersey, my mind was lost in relationship worries and perpetual mother/daughter/boyfriend quarrels—things that seem preventable in retrospect. Maybe if everything had gone more smoothly with my partner and my mother, I would have made more of an effort to see my sister. Amidst my blended family of step-this and half-that, divorce, marriage and drama, my kind, beautiful sister, Christin (on my father’s side), had always remained a constant.

On the day of my brother’s wedding—June 23, 2012—I received a phone call that Christin had committed suicide the previous night.

I often wonder whether, had I made more of an effort to see her in the weeks leading up to the wedding, I would still have received that call.

It was in 2010—my sophomore year at college—that Christin and I became truly close. After serving in the Coast Guard for over five years, she had finally stepped away, 26 years old and ready to pursue fashion design in New York City. She’d visit for sleepovers at my dorm, where we’d cram our tall selves—me 5’10” and her 6’1”—into my student twin bed. We caught up on the years spent apart after my mother and our father divorced. We shopped. We watched bad Robert Pattinson movies. We ate PinkBerry and drank Cosmos. We’d joke and sometimes cry about being lost souls—yearning for new worlds and new ways of life, but in each other’s presence we were at ease.

It was Christin who gave me my first joint. She said it was better for me to smoke for the first time with someone I knew and trusted, in case I got paranoid. But it was me who gave Christin her first Oxy. She’d suffered a back injury in the Coast Guard, but never bothered to take anything other than Tylenol for it. I had some left over from getting my wisdom teeth removed, and had occasionally taken them when my angst was getting the better of me and I needed to mellow out.

The relief she soon felt would ensure a lasting relationship with oxycodone, and later on a few of its friends: Valium, Vicodin and Xanax.

For most of my life, I’d shied away from drugs. Our elder sister had spent over 10 years addicted to the hardcore stuff, everything from meth to heroin. Christin and I saw what it did to her, and vowed at young ages never to get into anything so cruel to the body and mind.

But pills never seemed like “drugs”–especially not back then. My school gave me pills for anxiety and depression. Christin got them from the military in bulk. They were readily accessible in mom and dad’s medicine cabinets. They were legal.

“The line between recreational use and medical use has, for many kids, become a hoax, an anachronism, a lie,” writes David Amsden in his New York Magazine essay “Pop. Snort. Parachute,” in which he interviews dozens of New York City teenagers using uppers, downers and everything in between. The insidious nature of prescription drug addiction and its widespread impact has been well-documented in recent years.

This year, the National Institute of Drug Abuse revealed that the US is responsible for 75% of the world’s prescription drug misuse, causing over 100 deaths daily. And around 52 million people over the age of 12 have used prescription pills recreationally.

I don’t hate drugs, even after everything. I know certain drugs—legal and otherwise—are fine when taken responsibly, or as prescribed. I do hate the misinformation, ignorance and stigma that surround drugs. In my sister’s case, she had a prescription, so she—and I—thought it would be ok. But it wasn’t, because the legality of a substance isn’t always representative of the magnitude of the high, let alone the detrimental side effects it can cause.

When Christin and I would get together, we’d share each other’s pills. We didn’t discuss this, or the highs that would follow—the softness of Oxy, the vacantness of Valium. But whenever one of us seemed distressed, sad, or anxious, the other was there with a bottle at hand—under the pretense of necessity rather than pleasure or desire.

I’m lucky. I never got addicted. I only ever popped pills when Christin and I were together. Pharmaceuticals were never my “thing.” I preferred a Captain Morgan and Coca Cola, or a nice spliff, to anything that came in an orange tube with a doctor’s note.

But Christin couldn’t stop. “Hooked” seems like an understatement. She would tell me that she loved the oblivion. She loved being able to forget about the shitty life she’d led. Everything from her mother’s death, to our elder sister’s physical and psychological abuse of her, to the death of her secret love after his motorcycle accident, to her issues with my mom, to her struggles with body image and eating disorders—they all faded into the background, even her strained relationship with our dad that she always hoped to remedy. On pills, she was free. And freedom was worth any physical or psychological side effect.

I left for study abroad knowing it was the right choice for me—I had some of my own demons to face. When I was home for a week at Christmas in 2011, Christin asked me to stay. By this point, I knew something wasn’t right. She’d lost 30 pounds and barely ate. She was dating a man who was rumored to be a misogynist and coke addict. Maybe I should have stayed, for her. But I had found love, and Europe, and a sense of self-worth. I wasn’t prepared to give that up.

So when I returned for my brother’s wedding, six months later, I made plans to see her right away. But things went badly between my mother and partner, and preparing for the wedding consumed my time and energy. On more than one occasion, I didn’t answer Christin’s calls and ignored her text messages. We made a plan to get together but it fell through, and the wedding rehearsal took its place. Being there for my partner, my mother, and my brother took precedent over seeing my sister. There had been a grim monotone to her voice the few times we’d spoken, but I put it to the back of my mind.

I was getting my hair done, on the morning of the wedding, when my dad called to give me the news.

The world seemed to stop.

But the wedding had to go on; that was the decision my mother and father made. My brother—unrelated to Christin by blood—wasn’t told until after his honeymoon. My father told me to be there, otherwise it would be obvious to guests that something had happened.

The night of my brother’s wedding, with every ounce of strength in me, I was plastering on fake smiles and being forced to dance the YMCA; the next morning, I was staring at my sister’s casket, not believing it was really her—this frail, pale, sickly-looking girl. Not Christin. An empty shell.

I don’t doubt that the cocktail of pills Christin was taking from 2010 to 2012 were predominantly responsible for her unraveling state of mind, the drastic highs and lows, the heart attack she suffered that spring while I was away, tailed by a series of random respiratory halts in the months to come, her rising depression and suicidal thoughts. On June 22, 2012, she swallowed over 60 pills and finished them off with some aerosol inhalation.

I don’t know whether Christin would still be alive had I not given her that first Oxy (though I tell myself she probably would’ve started eventually, as soon as her back pain got to be too much). I wonder whether she would be alive if her doctors had not overprescribed her. Or if I had met up with her in those days before the wedding.

When someone you love commits suicide, people around you are quick to say, “It wasn’t your fault.” But I don’t know. In many ways, it was my fault—just as it was my father’s fault and my elder sister’s fault and everyone who should have been there when she needed us.