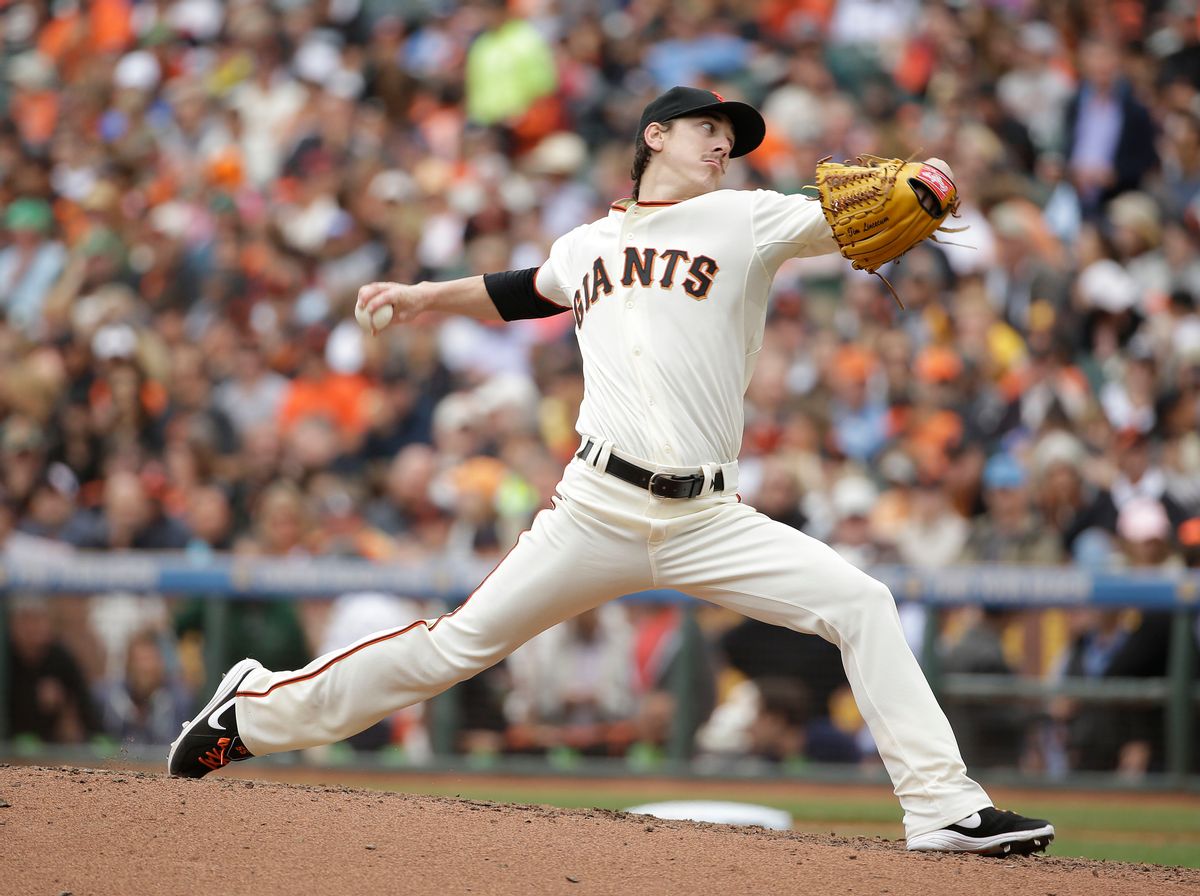 SAN FRANCISCO (AP) — The shaggy hair, overpowering fastball and consistent dominance have been replaced by a mustache, off-speed pitches and a long stretch of mediocrity.

Tim Lincecum has undergone quite a transformation since bursting on the scene as the undersized Freak who dominated bulky sluggers. Through it all, Lincecum has remained a fan favorite in San Francisco for his ability to produce memorable performances.

Lincecum pitched his second no-hitter against the San Diego Padres in less than a year, allowing only one runner Wednesday and leading the San Francisco Giants to a 4-0 win.

"Right now I guess I can say it's really cool," Lincecum said. "When I get older I can reflect on that a little more and just take it in for what it's worth. Right now I'm still kind of in the moment."

Lincecum shut down the weakest-hitting team in the majors, striking out six and walking one in a 113-pitch outing — 35 fewer than he needed last July 13 against the Padres in his first no-hitter.

Lincecum retired the final 23 batters after walking Chase Headley in the second inning, relying much more on his off-speed stuff than his fastball. Though the Padres hit a few balls hard, San Francisco fielders didn't need to make any exceptional plays to preserve Lincecum's gem.

"I've always been that guy who will kind of go for the strikeout," Lincecum said. "I think my first no-hitter I had 13, so I think I was going for those a little bit more often."

"Today I tried to be a little bit more efficient and take what they were going to give me. They were giving me a lot of groundballs and a lot of pop flies, so I was just going to try to keep attacking the way that I was," he said.

The right-hander with two NL Cy Young Awards became just the second pitcher in major league history to no-hit the same team twice. Hall of Famer Addie Joss did it for Cleveland against the Chicago White Sox with a perfect game in 1908 and a no-hitter in 1910.

Lincecum (6-5) threw the 16th no-hitter in Giants' history. Just one other pitcher has thrown two for the team: Christy Mathewson for the New York Giants more than 100 years ago.

"It's hard enough to do one," Giants manager Bruce Bochy said. "To do two, that puts you in a little different class. I couldn't be happier."

"Just to be in that company allows me a chance to pat myself on the back a little bit," he said.

Making the performance even sweeter was the fact that Lincecum got two hits of his own, becoming the first pitcher with two hits in a no-hitter since Rick Wise hit two homers for Philadelphia against Cincinnati on June 23, 1971.

"Regardless of what they did, I think it's cool I got two hits anyway because up to today I only had one and a pretty poor batting average," Lincecum said. "I got that thing above .100 and I feel much better about it."

But Lincecum will always be known for his pitching. He arrived as a shaggy-haired phenom nicknamed the Freak in 2007 for his ability to generate tremendous velocity from his slight frame.

He won NL Cy Young awards in 2008 and '09 and helped lead the Giants to their first World Series title in San Francisco the following season.

As age and wear and tear ate away at his velocity, Lincecum was forced to change his approach to pitching. It hasn't been an easy transformation at times as he posted a losing record the past two seasons as his ERA hovered around 5.00.

He was even relegated to the bullpen when the Giants won it all again in 2012, but was brought back with a $35 million, two-year deal last offseason for moments just like this.

"I think it's been a battle for him at times to make that transformation to what he is now," Bochy said. "Sometimes less is more, and that's what I think if anything, hopefully, he learned today."

Lincecum made quick work of the San Diego hitters in the late innings.

Lincecum struck out pinch-hitter Chris Denorfia to open the ninth. Pinch-hitter Yasmani Grandal followed with a tapper back to Lincecum, who tossed to first for the out.

Will Venable was up next and Lincecum retired him on an easy grounder to second base. Lincecum took a few steps toward first when the ball was hit, stopped to watch the play and clapped his hand into his glove when it was over.

Catcher Hector Sanchez soon met Lincecum for an embrace, and the rest of the Giants joined in the celebration.

"It was amazing," Sanchez said. "Anybody wants to be part of something special like this. That's a great feeling."