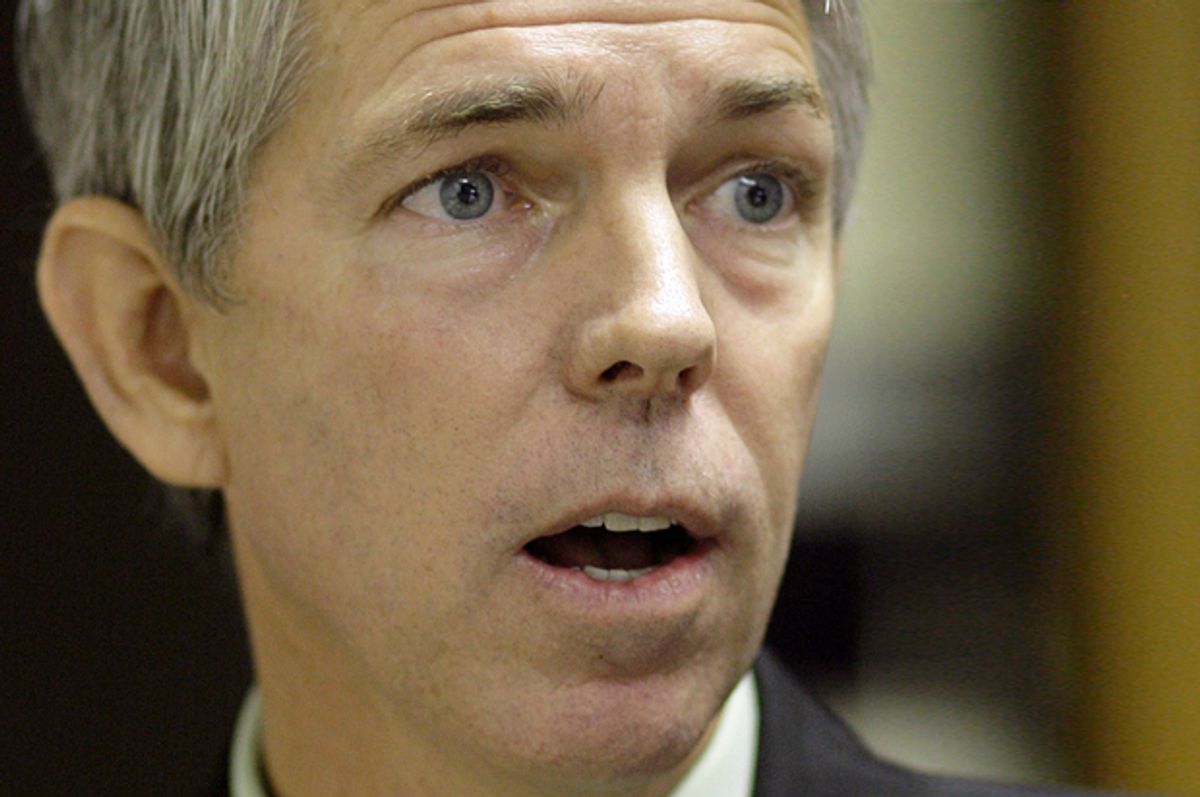 Back when Glenn Beck was one of the most admired men in America and Fox News' No. 1 celebrity, he introduced to the nation at large a "historian," well known among the Christian right, by the name of David Barton, who claims to have documentary evidence that the founders based the Constitution explicitly on the Bible. Beck often referred to a group known as the "black-robed regiment," which was composed of priests and clergy who were revolutionary sympathizers, comparing today's conservative preachers to what he implied were clergymen-soldiers in the secular liberal war on the Constitution.

Beck called upon David Barton to head what he called Beck University, an online course for those who wanted to educate themselves in the Beck school of thought. Let's just say it wasn't the curriculum you'd find at most schools of higher learning.   (You can hear one of David Barton's "lectures" here, where he tells the Beck U students that American exceptionalism springs from its Christian theocratic principles.)

Barton quickly became the toast of Wingnuttia. He was invited to participate in Tea Party events all over the country and even held a constitutional seminar for the 2010 incoming freshman class at the invitation of congresswoman Michele Bachmann.  The New York Times featured him in a glowing profile that only mentioned in passing that his alleged scholarship was, shall we say, controversial:

[M]any professional historians dismiss Mr. Barton, whose academic degree is in Christian education from Oral Roberts University, as a biased amateur who cherry-picks quotes from history and the Bible.

“The problem with David Barton is that there’s a lot of truth in what he says,” said Derek H. Davis, director of church-state studies at Baylor University, a Baptist institution in Waco, Tex. “But the end product is a lot of distortions, half-truths and twisted history.”

That's a very generous way of putting it. Unfortunately, his notoriety also brought new scrutiny to his alleged scholarship and that didn't work out too well as you might imagine. Here's just one example of his so-called scholarship being debunked by Chris Rodda, the senior researcher for the Military Religious Freedom Foundation, via Media Matters. She challenged Barton's insistence that Thomas Jefferson dated his presidential papers with the phrase "in the year of our Lord Christ," which indicated that the notorious theist was really a super-Christian (what with the added "Christ" and all).

This is the quality of constitutional scholarship that pervades the conservative movement these days: simple, outright lies that allege that this country was not founded on certain Enlightenment principles and the hard won experience of men and women who were exceedingly familiar with the bloody consequences of church and state being entwined.  It was, in their reckoning, conceived as a straight-up Christian nation, full stop.

But the good news in all this is that such craziness of the Tea Party fire is pretty much burned out and we don't have to worry too much about this crazy stuff, right? After all, today they're just a group of libertarian isolationists who want to work with the left to take our country back from the wealthy elites.  (And, who knows, maybe there really are a few like that out there.) But the makeup of the Tea Party remains the same as it ever was; it is simply the latest iteration of the far right.  And as religious right observer Sarah Posner adroitly observed:

[T]o understand why the Tea Party resonates with the religious right and vice versa, one must understand how the anti-government rhetoric of the Tea Party movement is driven by a fundamental tenet of Christian reconstructionism: that there are certain God-ordained spheres – family, church and government – and that government has exceeded the authority God gave it, to the detriment of church, family and the individual, whose rights, both Tea Partiers and religious right-ists maintain, are granted by God, not the government.

This notion that the federal government – not only godless, but in flagrant violation of God's will – is "tyrannical" and needs to be overthrown resonates from militias to the John Birch Society to the podiums of religious-right gatherings where Republican presidential hopefuls jockey for the support of the faithful. To fail to see the religious roots of the Tea Party mantra – or the ways in which it reverberates as a divine imperative – is to blind oneself to a fundamental feature of American conservatism.

If you would like to see how this is being expressed in our current election cycle, look no further than this fine fellow, the Tea Party-endorsed talk radio host  Jody Hice, who is running for Congress in Georgia's 10th District. Jay Bookman at the Atlanta Journal Constitution tells us:

“Although Islam has a religious component, it is much more than a simple religious ideology,” Hice wrote in his 2012 book. “It is a complete geo-political structure and, as such, does not deserve First Amendment protection.

And as Ed Kilgore points out, he's not the only one down there in Georgia running on a Christian right platform. In the 11th District, Barry Loudermilk is in a runoff with former impeachment manager Bob Barr (who also happens to be an actual, real live libertarian) and he' a true believer too:

Loudermilk is an eager member of the Glenn Beck wing of the GOP. He is also an apostle of faux historian David Barton, who preaches that the U.S. Constitution is a document intended to create a conservative Christian government. Like Hice, they reject the notion of a separation between Christianity and state, and argue that the First Amendment was intended only to keep government from favoring one particular Christian denomination.

And just in case anyone has doubts about how fringey these ideas really are, the words of a potential GOP 2016 presidential candidate ought to bring you up short:

“I almost wish that there would be, like, a simultaneous telecast, and all Americans would be forced–forced at gunpoint no less–to listen to every David Barton message, and I think our country would be better for it. I wish it’d happen.”  -- Mike Huckabee

Back in 2012 Barton's book "The Jefferson Papers" was finally challenged by Christian conservative scholars and his so-called credibility took a hit. But he wasn't down for long. He came back with presentations to state legislators in Kansas and Missouri and appeared at major Right to Life gatherings. Soon he was seen huddling in prayer with perhaps his most important connection, Sen. Ted Cruz:

“I’m not in a position to opine on academic disputes between historians, but I can tell you that David Barton is a good man, a courageous leader and a friend,” Cruz told POLITICO. “David’s historical research has helped millions rediscover the founding principles of our nation and the incredible sacrifices that men and women of faith made to bequeath to us the freest and most prosperous nation in the world.”

They aren't done yet.

Right Wing Watch has published  a thorough dossier on Barton if you'd like to read further.