Thad Cochran owes Mississippi Democrats: Here's how he can repay the debt

Democrats, especially black voters, likely won the Mississippi senator another term. Here's how he can repay them 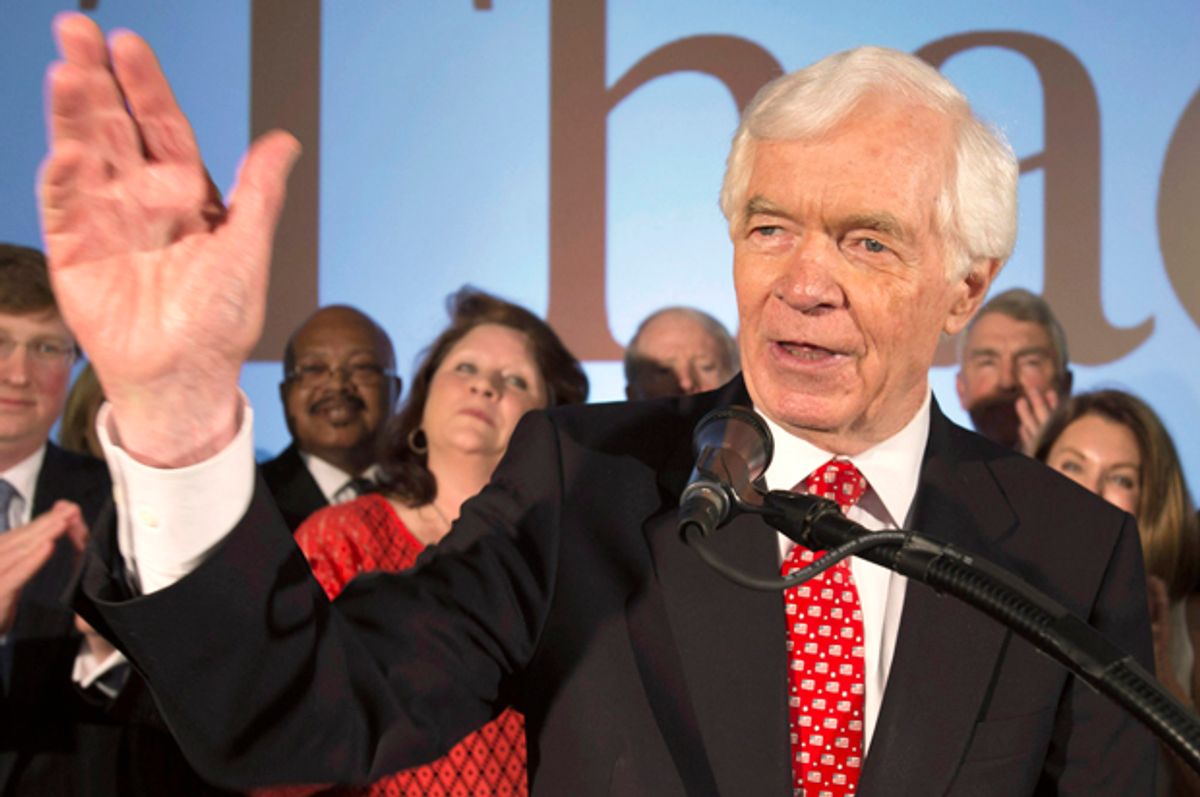 Yesterday morning, the Senate Judiciary Committee held a hearing on the Voting Rights Amendment Act to restore the section of the law thrown out by the Supreme Court one year ago to the day. In the time since Shelby County v. Holder, which gutted federal pre-clearance requirements for states with a history of racial discrimination when they seek to change their election laws, a number of states have moved forward with restrictive voting requirements. A bipartisan group of House members have released a proposed fix, and now Sen. Pat Leahy is trying to move an act through the Senate.

This comes as the country is also celebrating the 50th anniversary of Freedom Summer, a key moment in the civil rights movement when activists worked to register black voters in Mississippi. And, of course, the hearing came one day after African-Americans, under the the monitor of self-described Tea Party "election observers," turned out in a Republican runoff to successfully bail out Thad Cochran and likely secure him a seventh term in the Senate.

That there's a lot of stars aligning. What are they trying to say? Probably something beyond human comprehension. But let's go ahead and suggest that they're whispering to Thad Cochran: Thad, my son. You must now co-sponsor, and push to pass, a fix to the Voting Rights Act. It is your destiny. Doooo it. DOOOOO it!

Or what about supporting the Medicaid expansion in Mississippi, a poor state that could surely use it? According to the Kaiser Family Foundation, approximately 137,000 Mississippians will miss out on healthcare due to the state government's decision not to accept the expansion. That represents 37 percent of all uninsured non-elderly adults in the state -- the highest such percentage of all states opting out. As state House Minority Leader Bobby Moak told Reuters last year, "the healthcare act was written for Mississippi." Earlier this year, Mississippi Gov. Phil Bryant resorted to the pathetic excuse that he can't support the expansion because, hey, what if Obamacare is repealed at some point? Cochran doesn't run the state government, but Bryant has been one of his closest allies throughout the campaign. A public call by Cochran for the state to accept the expansion would go a long way.

Much of Cochran's appeal to African-Americans and Democrats has been that he supported the MLK memorial, historically black colleges and universities, the farm bill and various other projects for the state. Well, OK. But he can, and should, go further to support more difficult issues that a sizable chunk of his new coalition cares about.

Cochran, of course, doesn't have to do any of this. He could serve out the remainder of the year and his likely seventh term as usual, working in the background and being a reliable vote for the Republican leadership and the business community. He could cruise along, pretending that he didn't win last night's runoff with a mixed coalition of Republicans and Democrats. He could take those Democratic voters who turned out for him for granted.

But is that the legacy he'd want to leave behind? A longtime friend of Cochran wrote an interesting essay in Politico earlier this week describing the senior senator as the "last Southern gentleman" in a Republican Party that's been taken over by politicians who run hot. We'll see how true that is. Because a gentleman wouldn't turn his back on those who've saved him.