Rep. Andy Harris has moved to block D.C.'s marijuana decriminalization. It's a typical stunt -- and could backfire 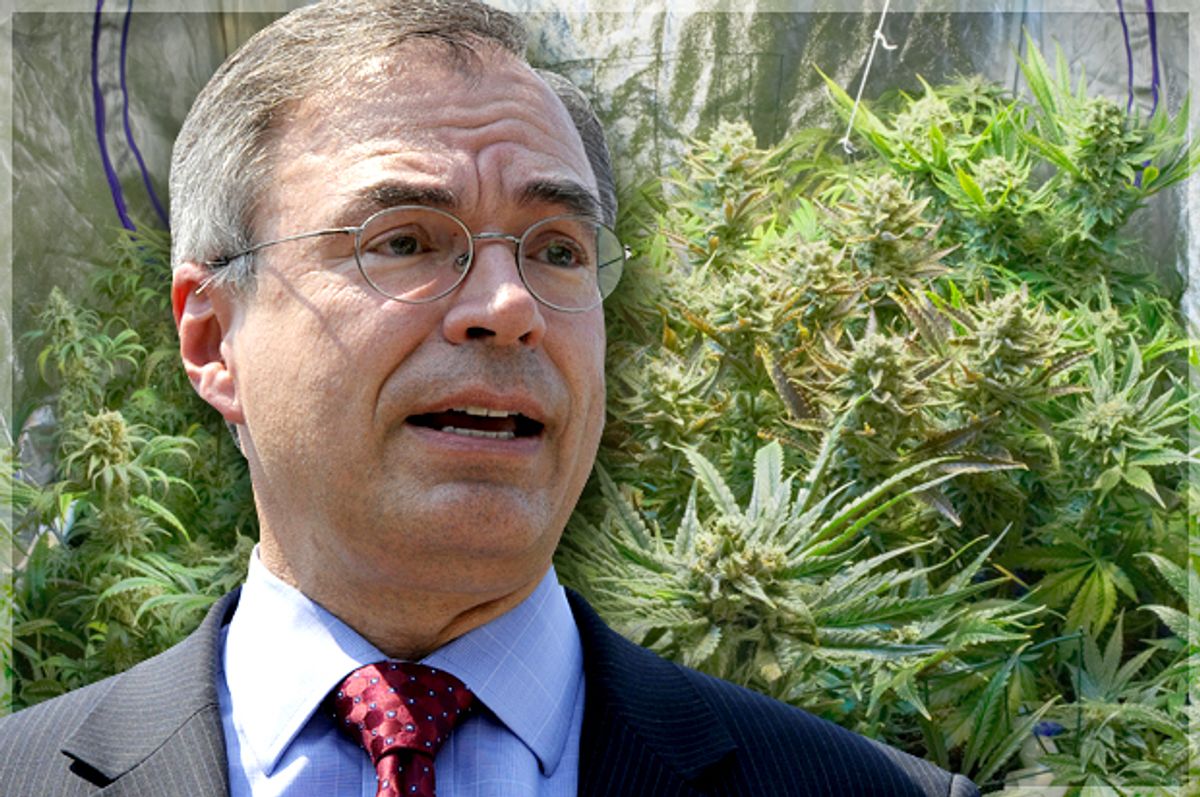 When the Washington, D.C., council passed a marijuana decriminalization bill and Mayor Vince Gray signed it into law this spring, the only question was, which terrible GOP House member will consider this his business and use his congressional power to block it?

The decriminalization law, set to take effect this summer, would eliminate most criminal penalties for possession of small amounts of marijuana while leaving in their place a small fine of $25. For those who think it's ludicrous that people (typically people of color) are thrown in jail for marijuana possession, this law is a good thing.

But since this is Washington, D.C., Congress has to give final approval on money that the District spends -- even though it raises it on its own. And so Harris, elected during the 2010 Tea Party wave and representing Maryland's Eastern Shore, proposed an amendment during a House Appropriations Committee meeting Wednesday that would "preclude D.C. from spending any of its locally generated tax revenue to implement the new law." It passed, mostly along party lines, 28-21. The law's fate now is likely in the hands of House and Senate budget negotiators.

Harris' rationale is that he is a DOCTOR and his DOCTOR opinion is that drugs are bad, especially for the children.

“As a physician, I have read study after study on the devastating effects of marijuana use, especially on developing brains of teenagers," Harris said in a statement after the vote. "Congress has the authority to stop irresponsible actions by local officials, and I am glad we did for the health and safety of children throughout the District."

It's great that he cares so much about the children throughout the District. He doesn't care about them quite enough to keep their parents out of jail for possessing a little bit of weed, but he cares. He really does.

Harris was even getting into it on Twitter with Mayor Gray.

"Though I am." This guy is the worst.

On the national level, Harris is probably most famous for an incident during congressional orientation in late 2010. Harris, like many Republicans that year (and the next cycle ... and the current cycle ...) had run hard against the Affordable Care Act. As soon as he'd won, however, he "surprised fellow freshmen at a Monday orientation session by demanding to know why his government-subsidized health care plan takes a month to kick in."

Before that, Harris was a state senator in Maryland. And it was in Annapolis that he honed his talent for pulling off obnoxious culture-war stunts like the one in the House Appropriations Committee.

In 2009, some students at the University of Maryland decided to host a screening of a big-budget pornographic film about pirates, and then have some sort of expert discussion panel afterward about sexual culture and blah blah. Sort of silly, but on the other hand, who cared?

State Sen. Andy Harris cared, that's who! As the Maryland General Assembly was hustling with actual serious issues to resolve in the last minutes of its legislative session that year, Harris decided to introduce an amendment: "Any public university that allowed the screening of a triple-X film would forfeit state funding -- about $424 million next year in U-Md.'s case." Yes, that's right, Andy Harris was threatening to withhold the University of Maryland's entire state funding if some students watched a pornographic film of pirates having sex. Eventually the Senate president dismissed Harris' amendment and everyone rolled their eyes at him for wasting so much time.

And just as that backfired, so, too, could the decriminalization effort. The Washington Post reported Thursday that "District lawyers are now exploring whether [Harris] might have actually moved to, in effect, legalize marijuana possession instead."

Even if the amendment survives a Senate conference, the decriminalization law converting marijuana possession from a misdemeanor into a $25 civil citation is likely to pass a congressional review period and take effect beforehand, sometime in mid to late July.

If the amendment — which bars the city from spending any funds to “enact or carry out any law, rule, or regulation to legalize or otherwise reduce penalties associated with the possession, use, or distribution [of marijuana and other drugs] for recreational use” — then takes effect after the decriminalization statute is officially on the books, the city would be in the odd position of having a decriminalization law that it could not enforce.

Harris denies that de facto legalization will occur as a result of his amendment. "Marijuana remains classified as a Schedule 1 Controlled Substance under the federal Controlled Substances Act, and therefore its possession remains illegal under federal law," he said in a statement to the Huffington Post. "The amendment clearly prohibits the District of Columbia from carrying out a reduction in penalties for the recreational possession of marijuana." Well, yeah, but possession always would have remained illegal under federal law. But, as the Post writes, "a mayor and/or police chief could order the police department to make small-time drug collars a low, if not the lowest, law-enforcement priority." The federal government has mostly deferred to localities and states that have either decriminalized or legalized possession.

Andy Harris, you see, is a clown person. Unfortunately, in Maryland's last redistricting, his district was made redder-than-red. That was mostly a plot by the Democrats who run the state to ensure that all the other districts in the state would be reliably blue, but still: It means that Andy Harris will be around Capitol Hill for as long as he pleases, protecting the children of Washington, D.C. With stunts.