A left-wing Tea Party may be closer than you think

A few liberal pols get all the press, but the real work of movement-building is happening in the states 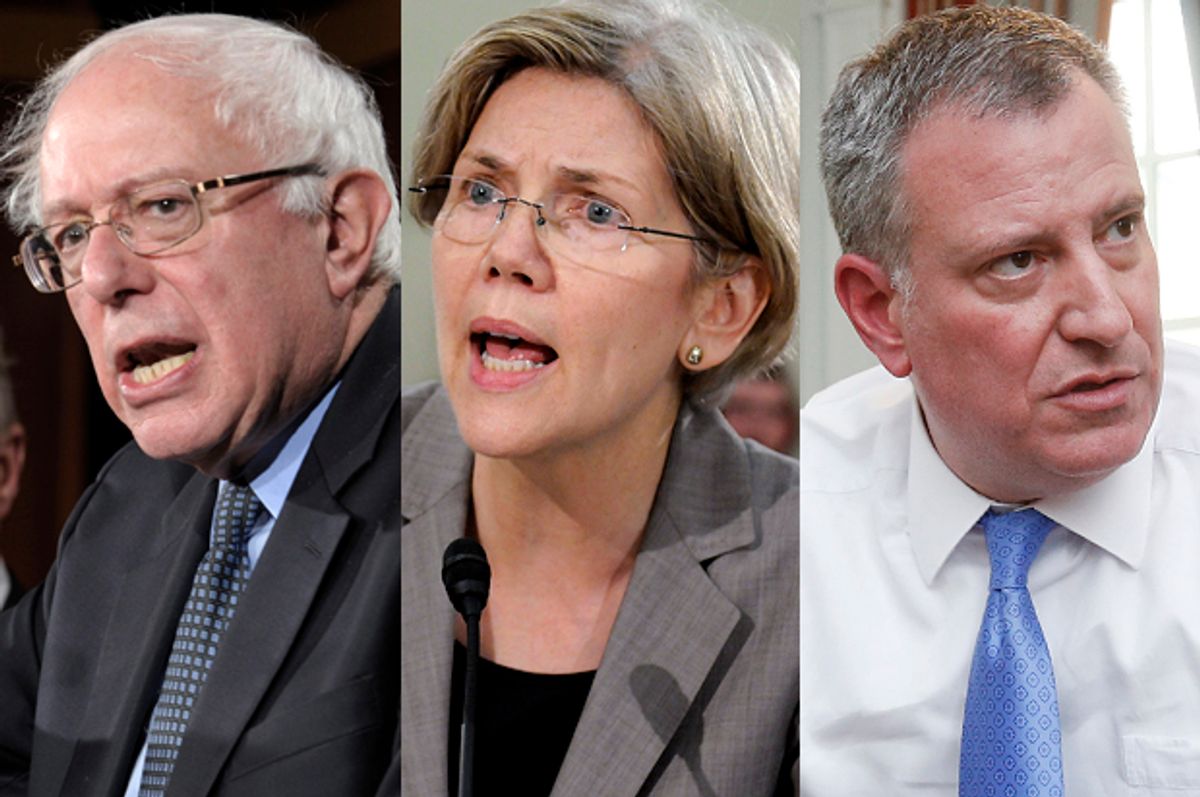 After supposed RINO Thad Cochran relied in part on African-American voters to defeat Tea Party favorite Chris McDaniel and win the Mississippi GOP’s nomination to the Senate, FreedomWorks president Matt Kibbe was very upset. Kibbe was so angry, in fact, that he was moved to petulantly declare, “If the only way the K Street wing of the GOP establishment can win is by courting Democrats to vote in GOP primaries then we’ve already won.” This Black Knight-like declaration of victory following conspicuous defeat was widely mocked as yet another example of the Tea Party’s preference to curate reality.

Not every Tea Party opponent was so dismissive, though. Calling “the daily vicissitudes” of the battle between the Tea Party and the GOP establishment “beside the point,” the Washington Post’s Greg Sargent wrote that McDaniel’s defeat obscured a more significant truth: “[O]n many key issues, the business community is getting nothing for its investment in the GOP establishment’s picks.” He went on to cite immigration reform, the Export-Import Bank, and federal spending on infrastructure as just three obvious examples. The obvious conclusion to be drawn? Maybe what Kibbe said wasn’t quite so silly after all.

At the very least, those on the American left hoping to push the Democratic Party away from the centrist, neoliberal policies it’s embraced since at least Bill Clinton (and arguably earlier, beginning with Jimmy Carter) and more toward a more populist, redistributionist approach should be lucky to be so silly. Indeed, members of what little there is of an American far left have long admired the Tea Party’s effectiveness, if not its goals. When, during last October’s Tea Party-inspired government shutdown, Jacobin’s Bhaskar Sunkara wrote that “Tea Party-like success … would be a tremendous advance for those looking not just to protect, but to expand, the welfare state,” he wasn’t playing contrarian but rather echoing a sentiment I’ve heard many times from leftist friends over the past four years. (For those unaware, here’s a good rundown as to why Occupy Wall Street, for all its virtues, doesn’t count.)

Some pundits have argued that the rising popularity of Massachusetts Sen. Elizabeth Warren and New York City Mayor Bill de Blasio is proof that, even without a left-wing Tea Party, demographic changes are pushing the Democratic Party inexorably leftward. There’s no doubt at least a kernel of truth to this. But it’s important to keep in mind that there’s nothing new about unapologetically liberal politicians coming out of the Big Apple and the Bay State. And the narrative gets even screwier if we keep in mind Gov. Andrew Cuomo’s fiscally conservative record, as well as his pending, almost certain, landslide reelection. Above all else, focusing on high-profile pols misses what makes the Tea Party so powerful: its ability to rally American conservatism’s activist troops.

As Ned Resnikoff recently wrote in the Baffler, if there’s to be a true left-wing Tea Party, it’ll have to be a bottom-up affair, one that is driven as much or more by longtime activists, issue-advocacy groups, organized labor and disaffected youth. It will have to be a movement, not a P.R. campaign. And as is the case with the Tea Party, it’ll have to derive much of its power and influence from hard work on the state and local levels, saving the more glamorous — but often less fruitful — work on Congress and the White House for last. As is the case for the real Tea Party, there would no doubt be politicians who seek to align themselves with the movement; but its real power players (at least at first) will have names you’ve never previously heard.

I frame a left-wing Tea Party as a hypothetical because, quite frankly, it right now manifests itself chiefly in tremors and glimmers of something bigger that may one day come. For this piece, I spoke to a handful of state-level candidates who fit that description — politicians whom Howard Dean might describe as coming from “the Democratic wing of the Democratic Party.” But while fondness for the party as it currently exists varied among them, a belief that Democrats need to do a better job pushing for economic justice — and against corporate prerogatives — was universal.

When I asked Rhode Island House of Representatives Democratic candidate Aaron Regunberg how he felt about the Democratic Party in Rhode Island (which is at once prohibitively powerful and often decidedly unprogressive), he answered at first with a pause and then a long sigh. “I think there’s a lot of frustration nationally with Democratic officials who folks feel have sort of sold out the values — justice, equity, fairness — that we want in our Democratic Party,” he said, “and I think here in Rhode Island that problem is taken to an extremity.” Despite his misgivings, though, the 24-year-old candidate — like many Tea Party-aligned politicians on the right — said that he ultimately wanted to bring the party back to its fundamental principles. “As often as the Democratic Party has let us down, I am a Democrat and I’m running as a Democrat and I want to be working to make our party live up to the values that it should,” he said. Asked what those values are, Regunberg descried them as “valuing the collective, valuing the community good and using the state effectively to advance that.”

Cory McCray, who is running for the House of Delegates in Maryland as a Democrat -- he won a Democratic primary with strong support from Maryland Working Families -- had a similar view of his party, describing it as needing to be “pushed” by outsiders to better live by what is ostensibly its foundational code. Behind “all great [political accomplishments],” McCray said, “people were pushing.” After citing Frederick Douglass — who famously said that “power concedes nothing without a demand” — McCray argued that the great progressive politicians of American history were only able to achieve what they did because of public pressure. “So many people pushed these great [politicians] from good to great,” McCray said. These politicians “didn’t just sit there and do it because they had to,” he added, “they were being pushed.”

From Maryland, McCray expressed concern about how the Democratic Party's dominance in his state can lead to complacency and mistaken priorities, but when I spoke with Wisconsin Assembly Democratic candidate Marina Dimitrijevic, she sounded just as left-wing as McCray but did so while praising the Democratic Party itself as a place where honest debate is welcome. “I am a Democrat and I’m a progressive Democrat and I’m very proud to be a Democrat,” she told me after I asked her if Democrats need a Tea Party of their own. Calling her party “a big tent,” Dimitrijevic noted how the party’s “more progressive, left-wing [bloc] continues to push us and I think that’s wonderful, and I actually tend to go more to the left myself.” Still, she said, even this push-and-pull happens within “a united front.”

More than anything else, it’s the tension evident in McCray and Dimitrijevic’s differing estimations of the Democratic Party that poses the biggest threat to a nascent Tea Party left. To be fair, this is certainly a reflection of Maryland and Wisconsin’s different circumstances and different political histories; but the underlying question of whether it’s better to work within “the system” or push it from without has been confronted by all of these candidates, and will no doubt plague future ones as well. If there’s to be a left-wing Tea Party, it would have to be held together by a somewhat paradoxical consensus — that the Democratic Party as it currently existed is fraudulent and corrupt, and that it was at the same time the only realistic vehicle for those looking to move American politics decidedly to the left. (Yes, Tea Partyers make occasional threats to break from the GOP and create a party of their own, but these warnings are not only infrequent but thoroughly hollow.)

Before she decided to run for the state Senate in Washington as a Democrat, Pramila Jayapal told me, the outside-inside conundrum was “the question that I thought about a lot.” Jayapal ultimately decided to fight from within and run as a Democrat because, she said, “different strategies are right for different times” and “here in Washington where we are [now] is working from within.” She acknowledged that “there’s a point at which [the inside game] just doesn’t work anymore and you really have to go to an outside strategy,” but ultimately decided that was a crisis-point her state had not yet reached. Still, when I asked her how she felt about calls for a left-wing Tea Party, Jayapal responded that “The basic concept that we want to make sure the Democratic Party is still reflecting the values and the vision of the left in this country is really what’s behind [those calls],” a concept, she said, that “certainly resonates with me.”

Whether Jayapal, Dimitrijevic, McCray and Regunberg will win their races and usher in a new era for the Democratic Party only time will tell. Similarly, it’ll take a while before we know whether Elizabeth Warren and Bill de Blasio’s success in recent years was a historical hiccup or an omen of American politics undergoing a more consequential shift. For his part, Working Families National Director Dan Cantor is optimistic. "Candidates who are willing to tell the truth about inequality will find there's a real following there," he said. Cantor described it as "inspiring" to see a new generation of progressive candidates ascendant nationwide. "[I]f we're going to make America truly work for all of us, not just the wealthy and well-connected," Cantor continued, "we'll need even more."

At this point, however — after more than five years of Tea Party disruption and rapid success — we should know at least this much: If the left is going to have a Tea Party of its own, it’ll have to do it by making its peace with the Democratic Party and supporting grass-roots candidates willing to change it from within. So, by all means, get excited for Sanders 2016; but just remember, a dissident underdog’s run for the White House cannot be seen as the end-result of so much left-wing agitation. It can only be the start.