Embarrassed by my favorite team: Here's how we stop buffoonish owners, racist team names and more

In the Donald Sterling and Daniel Snyder era, we need to know if sports teams share our values. Here's how we do it 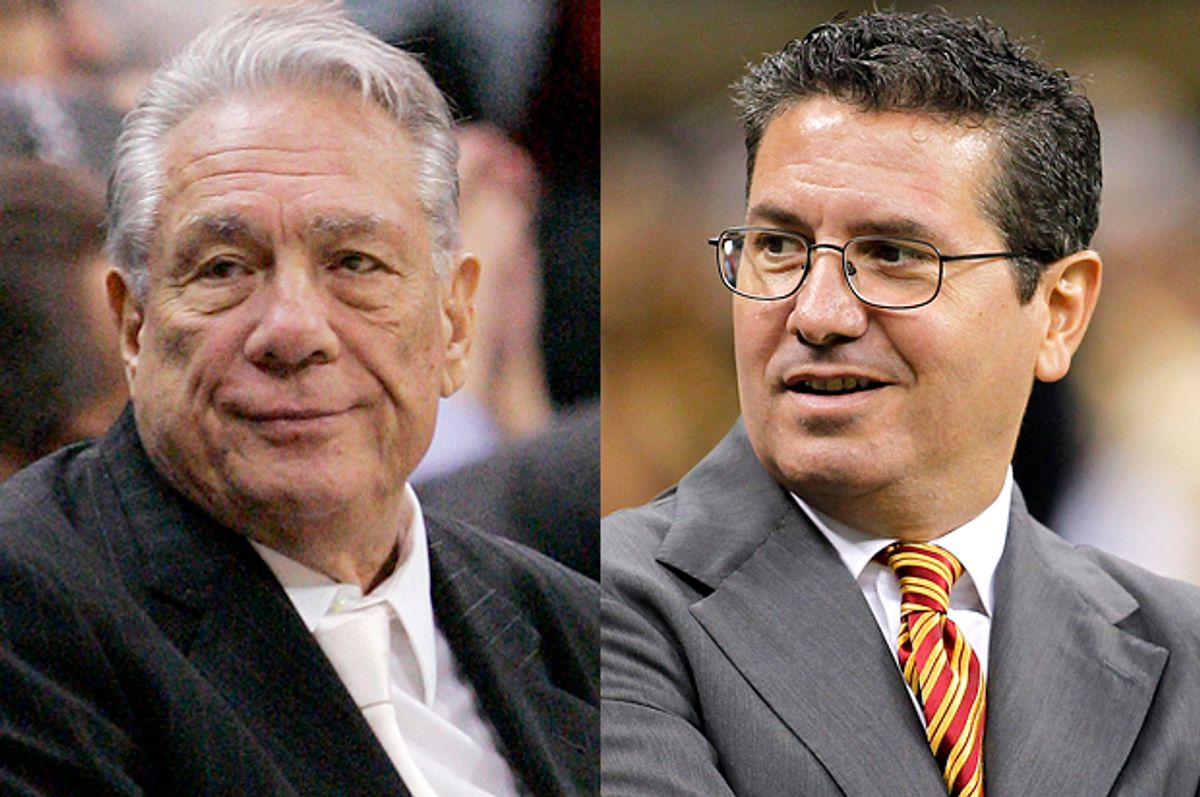 A few years back, I decided to root for the Los Angeles Clippers as my West Coast NBA team. My true loyalties are to my hometown Philadelphia 76ers, but, in Philly, we believe that losing builds character – and the Clippers had undergone some Philly-like struggles over the years.

I vaguely knew that owner Donald Sterling was widely regarded as a buffoon – “kind of spacey,” in the words of former 76ers part owner Pat Croce – but I had no idea that he harbored views straight out of "12 Years a Slave," that he was simultaneously repelled by and attracted to the grown men he clearly regards as his property. (“Look at those beautiful black bodies,” he is alleged to have marveled when taking female friends into the locker room.)

Had I known, I would not have invested any passion in pulling for Sterling’s team. And I’d wager that all those companies sponsoring Clippers games, not to mention a good many season ticket holders, likewise would have withheld their support. It’s all well and good that Steve Ballmer has now vastly overpaid for the Clippers franchise, presumably ending the reign of Sterling, and that the NBA is being advised by Dr. Richard Lapchick of the University of Central Florida’s Institute for Diversity and Ethics in Sport, but I’m still waiting for the answer to the most pressing question: Moving forward, how do we find out if our sports teams – beneficiaries of antitrust exemptions and taxpayer subsidies for their palatial stadia – actually share our values?

The answer is simple: we need a B Lab for sports. B Lab is the nonprofit started in 2006 by three successful one-time college buddies, two of whom were founders of AND1, the groundbreaking basketball apparel company that had $250 million in sales at its peak and appeared on the cover of Sports Illustrated in 2005.  This year, B Lab received a Skoll Award for Social Entrepreneurship for jump-starting what is commonly referred to as the “B Corp” movement. B Lab’s insignia – the B stands for Benefit -- confers a type of Good Housekeeping seal of approval when it comes to social responsibility for over 1,000 companies, including well-known brands such as Patagonia and Revolution Foods. “Many companies say they’re socially responsible,” says co-founder Jay Coen-Gilbert, a self-described pragmatic idealist and capitalist. “But how do you know if that’s just marketing? A company could be in a LEED certified building, but if they’re not paying their employees a living wage, are they really socially responsible?”

Coen-Gilbert and his team came up with a set of transparent rigorous standards designed to, as he says, “widen the aperture of the lens” of what it means to be socially responsible, providing consumers and investors alike with a shorthand way to identify companies that do well and good all at the same time. In the process, they’ve worked to pass legislation in 20 states that effectively creates a new class of company. B Lab changes its members’ articles of incorporation from C to B class; registering as a B Corp extends a company’s fiduciary responsibility beyond just shareholders to also include stakeholders – employees, the community, the environment.

So how about applying the same set of standards to our sports franchises? “Sports teams have a huge cultural footprint and they influence their cities beyond just improving morale,” Coen-Gilbert says. He has talked to two of the more environmentally progressive franchises – baseball’s Seattle Mariners and football’s Philadelphia Eagles – about opening themselves up to B Lab scrutiny, but here’s an idea: In the aftermath of the Sterling mess, our leagues ought to require all teams to apply for B Lab status, as a condition of ownership.

Had that been so in the case of the Clippers, fans and sponsors wouldn’t have had to rely on a TMZ report to ultimately learn about housing discrimination lawsuits filed against Sterling in the past, because B Lab certification would have required full disclosure of all litigation. And the process would have shed light on the minority hiring practices in Sterling’s front office; if, in the unlikely event it turned out that the team’s management suite was occupied by a rainbow coalition of executives, maybe that would have at least slightly tempered the outrage surrounding Sterling’s abhorrent remarks. Or take another recent case: Had NFL teams been required to undergo B Lab certification, it wouldn’t have required an Oakland Raiders cheerleader whistle-blower for us to learn that, of 26 teams that employ cheerleaders, precisely one – the Seattle Seahawks – pay their cheer squad minimum wage in a league that generates $9 billion in revenue per year and pays its commissioner a salary of $44 million.

“B Lab doesn’t look at governance and make a determination on legality or illegality,” says Coen-Gilbert. “We lay out the facts and determine what the right thing to do is, for the company and for its stakeholders.” To date, it’s working: B Lab members were 63 percent more likely to have emerged intact and relatively unscathed from the Great Recession than other companies.

I’m less interested in seeing Donald Sterling punished for saying idiotic things in private than with whether his – and others’ -- management of these de facto public trusts aligns with the values of their fans and business communities. NBA commissioner Adam Silver has been justifiably praised for acting decisively during the Sterling crisis, but keep in mind that, for all the recent talk of an NBA owners’ constitution, nobody outside the clubby confines of the league’s oligarchs have ever seen it. Silver may have been impressively decisive, but maybe the real test of leadership comes now, after the crisis, when the challenge is for our monopolistic sports leagues to finally be transparent with their stakeholders.

Larry Platt is the former editor of the Philadelphia Daily News and Philadelphia magazine and co-author of Just Tell Me I Can’t: How Jamie Moyer Defied the Radar Gun and Defeated Time. He can be reached at larryplatt.net