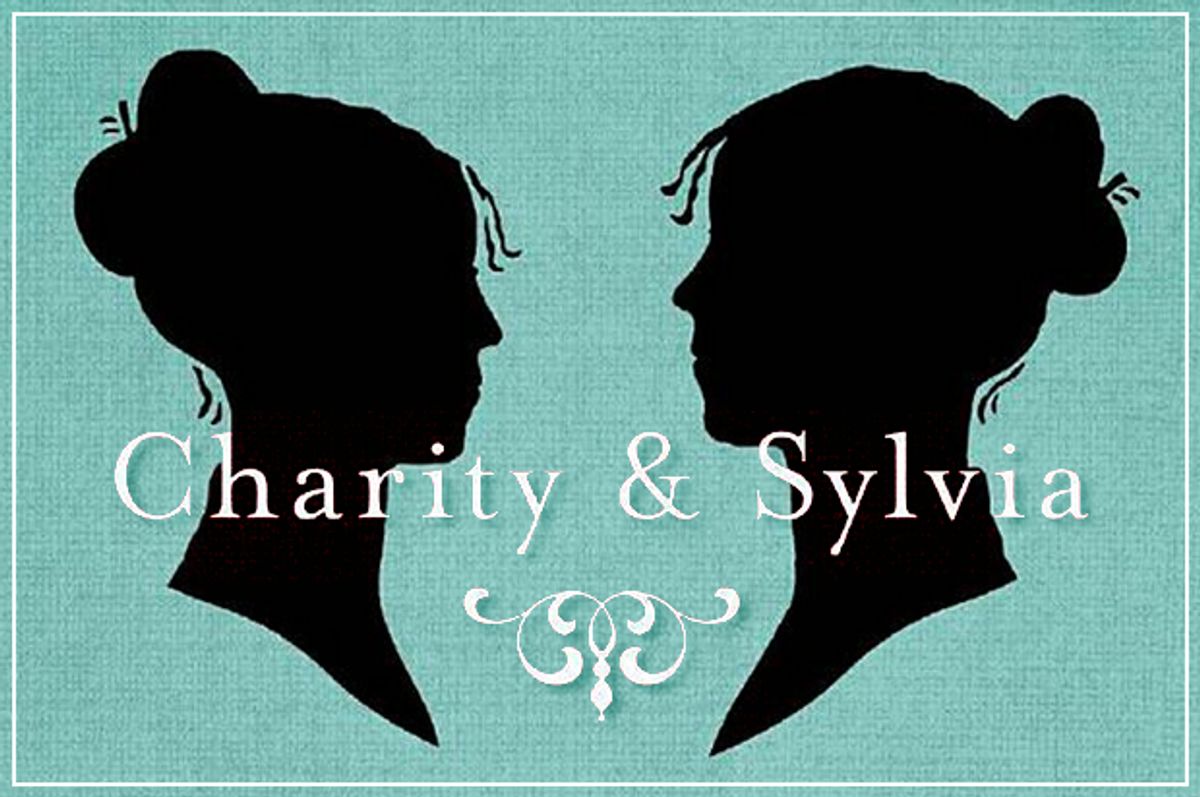 Vermont became the first state to vote for same-sex marriage in 2009, almost exactly 202 years after Charity Bryant and Sylvia Drake moved into a rented room together in the village of Weybridge. At 30, Charity was Sylvia's senior by seven years, and she had had a rocky early adulthood. Her intense relationships with a series of young women had provoked nasty gossip in several New England towns, forcing her to move around the region, bouncing from household to household as a guest of friends and relatives. Yet once Charity and Sylvia set up housekeeping -- and a tailoring business -- together, they would not be separated for a single night over the next 44 years. When they were much older, the poet William Cullen Bryant, Charity's nephew, wrote a celebrated account of their partnership, describing their bond as "no less sacred to them than the tie of marriage," and another local memoirist of the period noted that he had always heard "it mentioned that Miss Bryant and Miss Drake were married to each other."

Rachel Hope Cleves' new book, "Charity and Sylvia: A Same Sex Marriage in Early America," is a slim, tender tribute to this marriage-in-all-but-law. A professor of history at the University of Victoria in British Columbia, Cleves applies rigorous historical techniques to the couple's story, poring over caches of letters, diaries and shopping lists in local archives and looking up census reports. She takes great pains to substantiate her conviction that -- contrary to what some historians have argued -- the relationship between Charity and Sylvia was most definitely erotic. Yet none of this documentation weighs the book down. Academic histories capable of bringing tears to a reader's eyes are rare, but "Charity and Sylvia" is one of them.

Charity Bryant was born to a well-regarded Massachusetts family in 1777. A running theme of "Charity and Sylvia" is the remarkable generational divide between those Americans who came of age before the Revolutionary War, in a world dominated by tradition, and the generation raised after it. Many of the latter -- known as the "rising generation" by their elders -- had been orphaned or beggared by the war or by disease. Furthermore, Cleves writes, "the war for independence had not only broken the political bonds of empire, creating a new nation, it had torn the social fabric of the colonial world, birthing a new American culture." If it was possible to jettison England and her king, why not other authorities, as well? For while in colonial America, "no more than 2 or 3 percent of women remained unmarried for life," after the Revolution, "an increasing number of women, like Charity, began to choose singlehood in order to preserve their autonomy."

Marriage was a grueling and dangerous profession for all but the richest colonial women. It typically involved back-to-back pregnancies (Charity's own mother gave birth to nine children before she died at age 39), any one of which might kill the mother, as well as a mammoth burden of housework and childcare in an era before running water or indoor plumbing. Add to that the loss of the female partner's individual and property rights, and you wonder why more women didn't flee the altar. Or, rather, you do until you learn that opportunities for respectable women to make an independent living were scarce. At first, Charity worked as a schoolteacher, a job she valued for the freedom it gave her to read, think and write -- and also for the entree it gave her to what Cleves characterizes as "a loose network of bookish young women who formed primary romantic relationships with each other."

Charity and Sylvia's culture was one that idealized friendship, and one in which many people with no erotic interest in their own gender nevertheless counted their relationships with same-sex friends to be the most important and rewarding in their lives. This context has led some scholars to conclude that society at large simply couldn't imagine that some of these friendships might also include sex of one form or another, but Cleves disagrees. The very fact that Charity repeatedly came under suspicion for her close friendships with other young woman and felt hounded into leaving town under the pressure of those suspicions, suggests that while intense same-sex friendships were prized, most adults understood that they could be taken "too far."

Charity and her friends wrote each other incessantly, letters and poetry; acrostics and rebuses -- poems in which words, typically the friend's name, were encoded -- were a particular specialty of Charity's. These verses and letters are replete with flowery, sentimental language and frequently quote or allude to other literary works or scripture. Portions of such letters were often read aloud to family members. Difficult or scandalous matters were never committed to paper, yet messages could be conveyed in other ways. In one tour-de-force chapter, Cleves decodes the correspondence between Charity and the primary friend she had before Sylvia, noting the way certain lines and images tap in the English poetry's long tradition of using landscape description to evoke more intimate pleasures. "Oft I saw the rosy dawn / deck the hill, the vale, the lawn / Pleased I found them, fair and warm," wrote the British lesbian poet Anna Seward. (You'll never look at the word "vale" the same way again after reading "Charity and Sylvia.")

Some of Cleves' interpretations seem a bit of a stretch, such as a nervous letter Charity received from the same friend mentioning "the thing which you supposed you left I have found here" -- Cleves suspects that might be a reference to a hand-sewn dildo or other sex toy. But in sum, the author makes a plausible case for Charity enjoying a gratifying, if furtive, sex life before she met Sylvia. In fact, Charity was something of a heartbreaker, a woman whose confident manner and bold initiative were viewed by her friends and acquaintances as "masculine." Even after she'd settled down with Sylvia, she had to fend off the affections of the importunate teenage sister of the local minister.

Sylvia was less experienced and from a humbler family; the two women met when Charity came to the frontier-like Weybridge to visit Sylvia's sister and brother-in-law, her good friends, after yet another "romantic friendship" had begun to alarm the other girl's family. After falling in love with Sylvia, Charity set up her own business making clothes and invited her new friend to live with her as her "apprentice." The business was a success (the women habitually worked past midnight) and weathered two serious financial downturns. Charity and Sylvia built a cottage on rented land, became pillars of the local Congregationalist church, donated to good causes, taught Sunday school, baked pies for their neighbors, distributed home remedies and played auntie to a couple of generations of village children, including a dozen or so who were their blood relations.

In time, the couple became an integral and beloved fixture of the community, and their mutual devotion was celebrated by local historians into the 1950s. But how did pious Weybridge countenance the fact that the women's "marriage" was not just unconventional, but downright sinful? (Charity and Sylvia themselves agonized quite a bit over their "fleshly" transgressions.) The nature of their relationship constituted what Cleves calls an "open secret," a phenomenon by which "small communities can maintain the fiction of ignorance in order to preserve social arrangements that work for the general benefit."

This was an unofficial form of "don't ask, don't tell." The fact that Charity and Sylvia roughly abided by the traditional gendered division of labor (Sylvia did all the housework; Charity was the public face of the business and listed as head-of-household in the census), made their relationship seem less unsettling. And the town needed them. Contrary to the contemporary notion of the big city as an ideal place for sexual minorities to live freely, Cleves writes, "more recognition needs to be given to the distinctive opportunities that rural towns allowed for the expression of same-sex sexuality."

Charity and Sylvia's story is not especially rare. Many contemporary Americans recall a bachelor uncle or aunt whose same-sex "roommate" came to be considered part of the family. Of course, the tolerance that Charity and Sylvia earned in Weybridge was not the acceptance that heterosexual married couples claimed as their due, and shouldn't be confused with it, but it's immensely touching all the same.

As Cleve builds her narrative, with its everyday details of bread baked, visits from the minster, a letter from the favorite nephew the aunts have sent to college, meetings of the Weybridge Female Benevolent Society, and so on, "Charity and Sylvia" becomes not just a love story between two women who so easily might have ended up alone. It's also a story of the love between those two women and their town. When Sylvia died at age 83 (she outlived Charity by 16 years), her grand-niece's husband did not hesitate to splurge on an extra-fancy headstone to replace the temporary marker put on Charity's grave. The new one had both their names on it. They were buried together in the Weybridge cemetery, "and there," Cleves writes, "you can find them still."