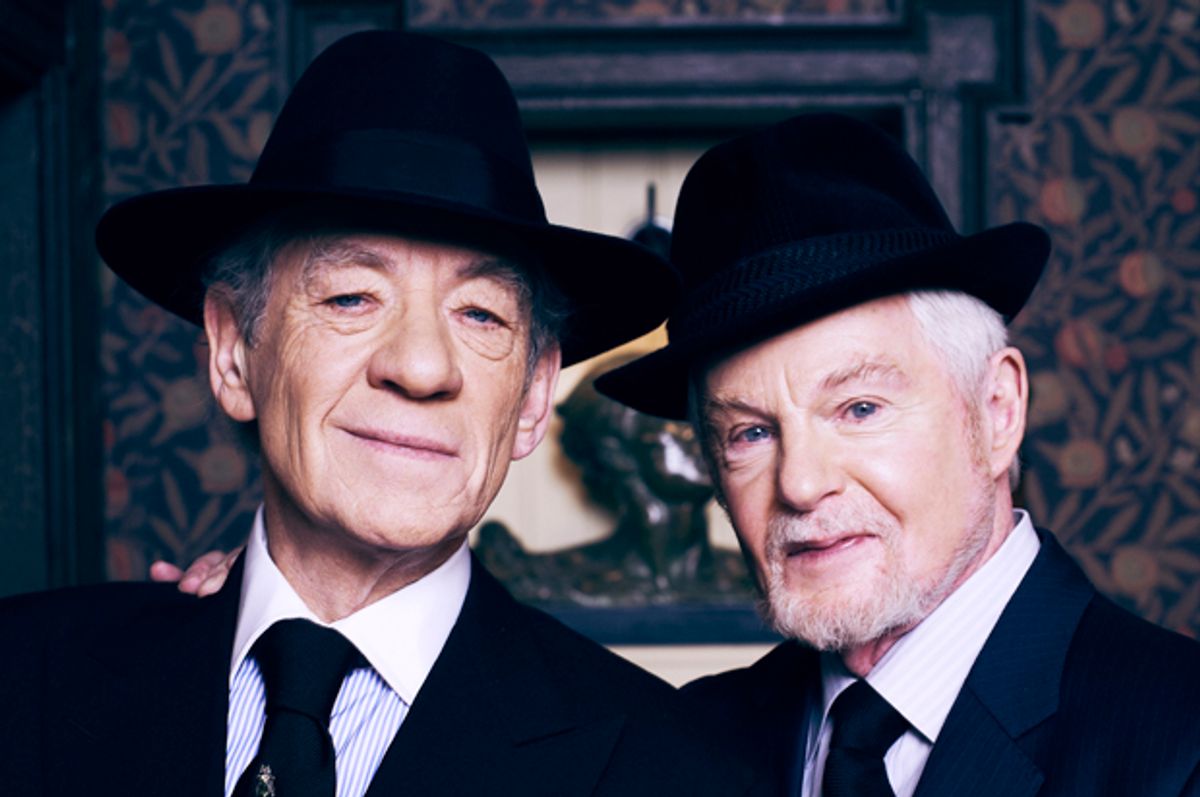 For all those who were dispirited by Ian McKellen's barely there role in the recent "X-Men" sequel, the man's still got it -- all it took was a sitcom to bring it out.

Last night was the premiere of "Vicious," McKellen's new sitcom (airing on PBS, an unusual home for something so barbed), which is an argument for just how valuable the actor is to the culture. After more than a year of fairly irritating publicity stunts featuring Patrick Stewart, McKellen has finally found a project that taps into his energy without being cloying.  Indeed, the series is perfectly timed, premiering as it did when New York and London were holding their gay pride celebrations -- it's a project that connects the viewer to a streak of gay humor that has all but died out in the TV world.

McKellen plays Freddie, half of an aging gay couple; he and his common-law husband, Stuart, played by the great Derek Jacobi, aren't perpetually fighting, exactly, because that implies some sort of heat. They're, instead, icing one another out at every turn, coldly putting down one another's appearances or failed careers with a single lacerating line.

TV hasn't been very good at depicting gay relationships, for whatever reason -- and "Vicious," though hardly an ideal, feels at least specific enough to be real. McKellen and Jacobi, in the premiere, both lust over their 20-something neighbor in a manner that makes the viewer feel like an eavesdropper; their barbs, hinging in large part on Freddie's delusions about his acting career, are based on real character traits and not just bitchiness. McKellen's willingness to allow his natural authority to lurch into buffoonery, so irritating when deployed in a Twitpic with Patrick Stewart, is particularly well-used here -- he's constantly being brought low for his egotism. Compare these sharp, witty squabbles, rooted in the characters' deep familiarity with one another, with the free-floating exasperation between Cameron and Mitchell, the "Modern Family" gay couple who always seem to have met one another two hours ago.

There's not really any point to "Vicious"; it's a 30-minute blast of pure vitriol, with a small redemptive moment at the end of each episode. And yet in an era during which gay people feel more and more indistinguishable from straight people, particularly on television, there's something worthwhile about a show whose sensibility is so rooted in the way a certain streak of gay men talk to one another and how they relate to the world.

The men at the center of "Vicious" hate one another slightly less than they hate the rest of the world, in a way that feels very specific to their era; the show, with its sharp humor, makes the best of the tough lives a generation of gay men led, and is a valuable testament for younger gay men who have grown up thinking that to be gay is just the same as anyone else's experience.