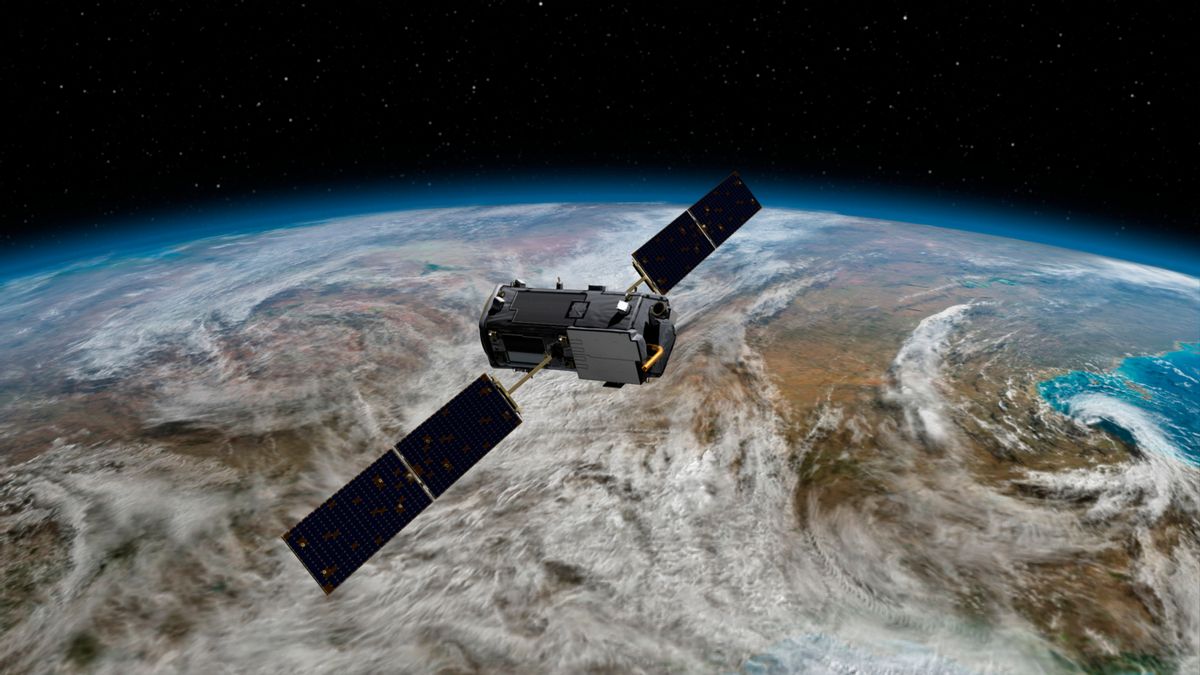 This Jan. 22, 2014, artist concept rendering provided by NASA shows their Orbiting Carbon Observatory (OCO)-2. The OCO-2, managed by NASA's Jet Propulsion Laboratory in Pasadena, Calif., will launch from Vandenberg Air Force Base, Calif., on a Delta II rocket on July 1, 2014. Five years after a NASA satellite to track carbon dioxide plunged into the ocean after liftoff, the space agency is launching a carbon copy _ this time on a different rocket. The $468 million mission is designed to study the main driver of climate change emitted from smokestacks and tailpipes. (AP Photo/NASA/JPL-Caltech) (AP)
--

LOS ANGELES (AP) — Five years after a NASA satellite to track carbon dioxide plunged into the ocean after liftoff, the space agency is launching a carbon copy — this time on a different rocket.

The $468 million mission is designed to study the main driver of climate change emitted from smokestacks and tailpipes. Some of the carbon dioxide is sucked up by trees and oceans, and the rest is lofted into the atmosphere, trapping the sun's heat and warming the planet.

But atmospheric CO2 levels fluctuate with the seasons and in different regions of the Earth. The natural and human activities that cause the changes are complicated. The Orbiting Carbon Observatory-2, or OCO-2 for short, will be able to take an ultra-detailed look at most of the Earth's surface to identify places responsible for producing or absorbing the greenhouse gas.

"This will allow us to understand what processes are controlling how much carbon is absorbed in a given time and place," Anna Michalak, a scientist at the Carnegie Institution for Science who is part of the mission team, said in an email.

The mission, designed to last two years, could provide data that will help scientists making predictions about future carbon dioxide levels and their impact.

NASA suffered a major scientific — and financial — disaster in 2009 when a rocket carrying the original satellite plummeted into the waters off Antarctica minutes after soaring from Vandenberg Air Force Base along the central California coast.

After the loss, engineers went back to the drawing board and built a near-identical twin that was set to launch before dawn Tuesday.

Instead of using the same rocket, the replacement will be flown on a Delta 2, a workhorse booster that once faced a murky future.

Scientists who have no role in the mission welcomed the latest flight attempt. They said it would have taken even longer to get to the launch pad with a completely new design.

"We don't have time to waste. We need solutions now," said Elisabeth Holland, a professor of climate change at the University of South Pacific in Fiji who helped write the 2007 Intergovernmental Panel on Climate Change report.

There has not been an Earth-observing satellite dedicated to tracking carbon dioxide since the Japanese launched one in 2009.

"It's really the fate of carbon dioxide once it's in the atmosphere that we're trying to really put our finger on," project scientist Michael Gunson of the NASA Jet Propulsion Laboratory said during a recent pre-launch news conference.

Since the industrial age, the concentration of carbon dioxide in the air has increased dramatically. Some 40 billion tons of the greenhouse gas are pumped out yearly from the burning of fossil fuels.

About half ends up trapped in Earth's atmosphere while a quarter is absorbed into the ocean. Another quarter is sucked up by trees and plants.

After the 2009 failure, a team of experts appointed by NASA traced the problem to a piece of rocket hardware — the nose cone protecting the satellite — that did not separate as planned. The extra weight prevented Orbital Sciences Corp.'s Taurus XL rocket from reaching orbit.

Two years later, it happened again. Despite a design change, NASA's Glory satellite was lost aboard another Taurus XL rocket. The mission was supposed to study solar radiation and airborne particles that reflect and trap sunlight.

The back-to-back fiascos led NASA to choose the Delta 2 rocket made by United Launch Alliance, a joint venture of Lockheed Martin and Boeing Co. The Delta 2 had faced an uncertain future after its main client, the U.S. Air Force, switched to the more powerful Delta 4.

The new mission costs almost twice as much as the original, mainly because it will ride on a more expensive rocket. Engineers also had to swap out obsolete parts, adding to the mission price tag.

After a six- or seven-week shakedown, the satellite's lone instrument, a high-resolution spectrometer, will begin its mission of scanning the Earth. Once in polar orbit 438 miles high, the satellite will circle Earth every 100 minutes. It will measure carbon dioxide levels by looking at the intensity of sunlight reflected from the presence of CO2 in a column of air.

NASA hopes to begin making the data available for free to anyone beginning early next year.

The satellite will join a constellation of 17 other NASA spacecraft that stare down at the planet.

Project manager Ralph Basilio said the team was heartbroken over the 2009 mishap and looked forward to a second chance.