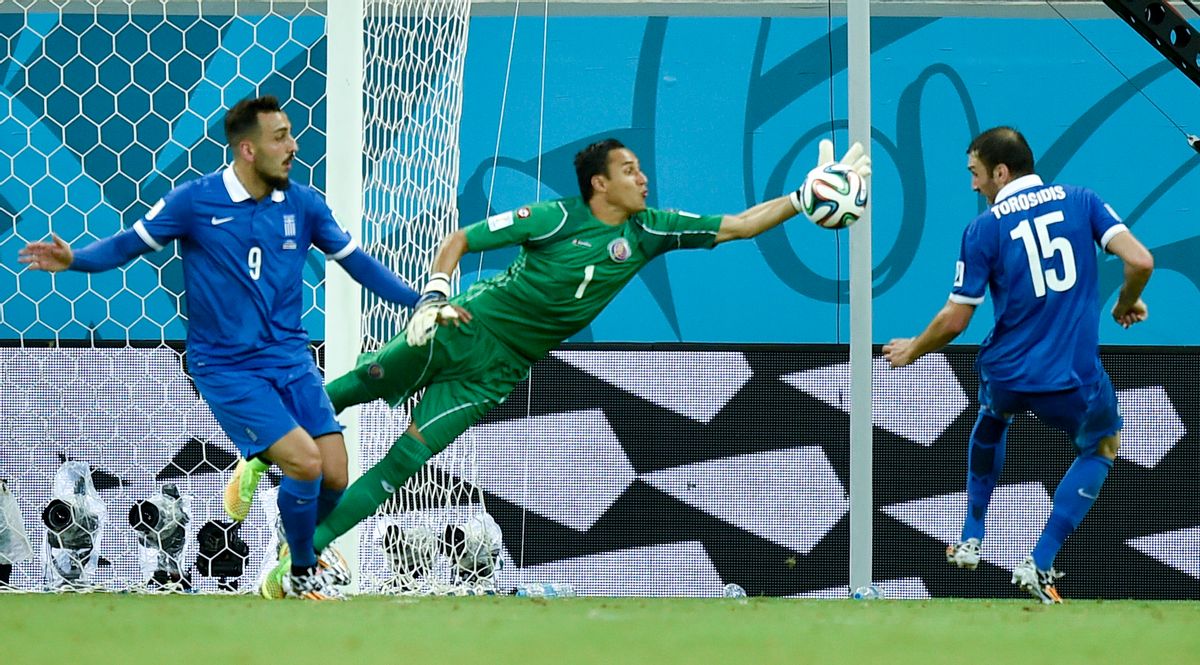 Costa Rica's goalkeeper Keylor Navas clears the ball away from Greece's Kostas Mitroglou (9) and Vasilis Torosidis during the World Cup round of 16 soccer match between Costa Rica and Greece at the Arena Pernambuco in Recife, Brazil, Sunday, June 29, 2014. (AP Photo/Martin Meissner) (Martin Meissner)
--

RECIFE, Brazil (AP) — Costa Rica beat Greece in a penalty shootout Sunday to reach the World Cup quarterfinals for the first time after defending with 10 men for nearly an hour.

Greece's Theofanis Gekas saw his penalty saved by Costa Rica goalkeeper Keylor Navas for the only miss in the shootout.

Costa Rica will play the Netherlands in the quarterfinals.

Costa Rica had taken the lead early in the second half through captain Bryan Ruiz but then had defender Oscar Duarte sent off in the 66th minute with a second yellow card for a mistimed tackle on Jose Holebas.

The Greeks equalized in injury time when defender Sokratis Papastathopoulos smashed in a rebound to finally make the team's numerical advantage pay.

FORTALEZA, Brazil (AP) — Klaas Jan Huntelaar and Wesley Sneijder scored late goals to give the Netherlands a comeback victory over Mexico and a spot in the World Cup quarterfinals.

Huntelaar, who came on as a 76th-minute substitute, scored the winning goal from the penalty spot deep in injury time after Rafael Marquez brought down Arjen Robben in the area.

Giovani Dos Santos gave the Mexicans the lead in the 48th minute, but Sneijder equalized for the Dutch in the 88th.

It was the first time Sneijder, who scored five goals at the last World Cup in South Africa, has found the net in Brazil.

Robben has already scored three goals for the Dutch at this year's tournament, but after earning the late penalty, he handed the ball to Huntelaar.

"Klaas is a great penalty taker. He was fresh, had just come on and I had faith in him," Robben said. "I asked him if he wanted to take it and he was very sure of himself."