In the "manosphere," men resent women for "withholding" sex. And the scariest part is that they're far from alone 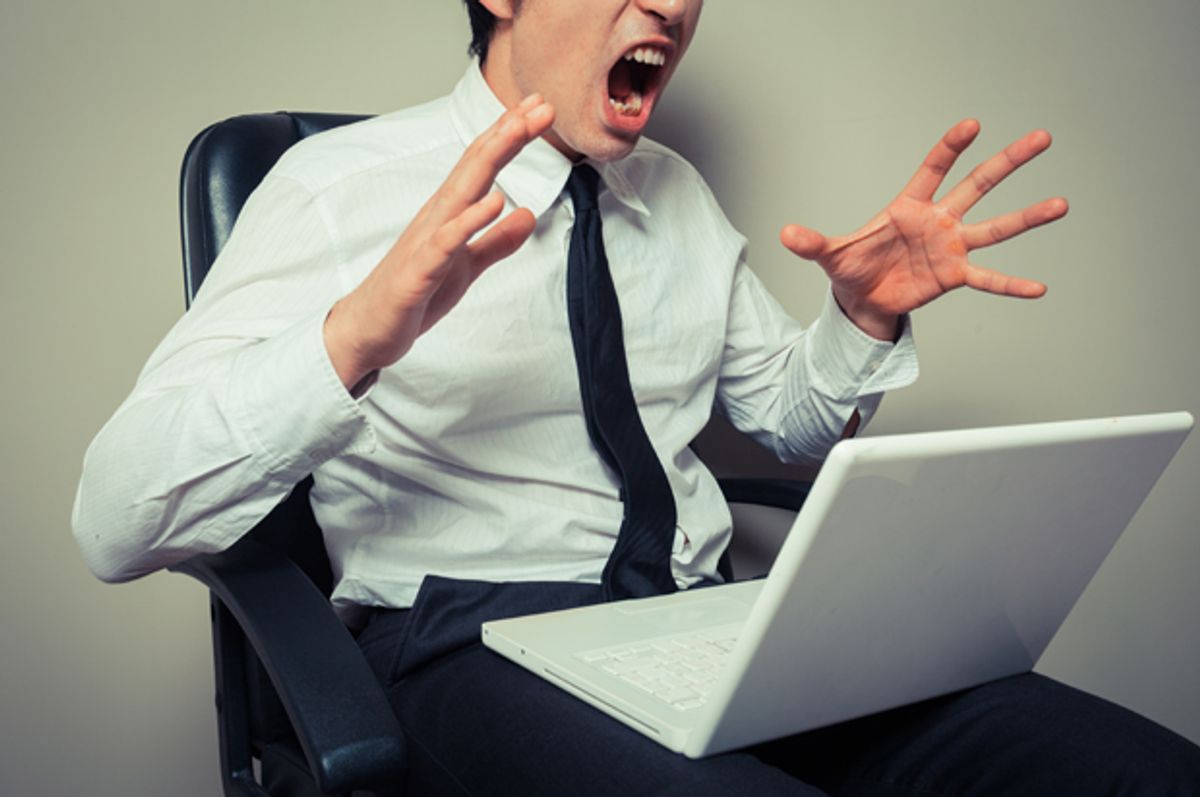 "Woman's Nature is to Cheat, Protect Yourself," reads the post's title in the men's rights subreddit TheRedPill. The first sentence reads, "This is the basic meaning of 'alpha fux beta bux' and it's true."

To those not initiated in the linguistics of the "manosphere," the phrase "alpha fux beta bux" is meant to express the idea that women settle down with sucker beta males and drain them of their money while sleeping around with alphas who get all the sex and don't have to spend a dime. It's a mentality I was reminded of in the wake of my recent piece, "In Praise of the 'Beta Male,'" when a reader wrote to tell me that I was inadvertently supporting the "alpha fux beta bux" argument. I don't think that's true, although I can see why he believes that: I wrote about how I'd ended up with a nice guy after years of casual dating and flings. If you're already convinced of the "alpha fux beta bux" maxim, you're likely to see my settling down as a desperate ploy to attach my pathetic, aging self to a beta provider. But that completely ignores the reality of what I wrote: I appreciate my husband because we're partners.

This reader said I was "affirming the idea that young women can and should ignore young men who are 'just too nice and available'." Not true! I have written than young women sometimes avoid nice and available men because they aren’t ready for, or are scared of, commitment. There are no “shoulds" here, only messy human realities. He continued, "Nice, available men have been taught forever that those are good things," he writes. "Maybe they're not. Maybe I should consider telling more men to just take the plunge and quit being husband material - quit being 'nice and available' - in their twenties. Those guys have feelings too, and it really sucks for me to read that because I trust you, and you're telling me that, yeah, those guys are suckers from ages fifteen to twenty-seven." My husband had a series of serious long-term relationships before me. That's only "sucker" if men are only validated and actualized by sleeping with an exorbitant number of women without commitment.

But that's not the point of this piece. I only mention the above because that's how I ended up this morning reading through pages of TheRedPill with the fascination of an anthropologist. As you might suspect, the subreddit is named after the red pill/blue pill scene in "The Matrix." In the post mentioned earlier, the poster wrote, "Feminism, liberalism and modern egalitarian delusion means that you've been brainwashed and that eternal truths about women, formerly known to men and taught to them by their fathers or by friends, are now hidden. This is why you must take 'red pill.' The modern totalitarianism depends on you being dominated and scammed by women." What are these eternal truths about women, you might ask? He quotes German philosopher Arthur Schopenhauer: "Women in truth exist entirely for the propagation of the race, and their destiny ends here, they live more for the species than for the individual, and in their hearts take the affairs of the species more seriously than those of the individual. This gives to their whole being and character a certain frivolousness, and altogether a certain tendency which is fundamentally different from that of man; and this it is which develops that discord in married life which is so prevalent and almost the normal state."

This guy is for real! So too are the group's 60,000-plus members. In the wake of Elliot Rodger's killing spree, it can't be said enough: These misogynistic men exist, and in disturbingly large numbers. It's also important to understand the woman-hating mentality behind such men. Their enemy is equality. "Feminism is a sexual strategy," writes one poster. "It puts women into the best position they can find, to select mates, to determine when they want to switch mates, to locate the best dna possible, and to garner the most resources they can individually achieve." Another poster summarizes the "four unrelated forces" that "simultaneously combined to entirely distort the balance of civilization built on the biological realities of men and women" as "easy contraception," "no fault' divorce, asset division, and alimony" and "female economic freedom." TheRedPill-ers believe that false rape accusations are common (to the degree that one man admitted to making an audio recording of a tryst), that for men divorce is comparable to "rape" and that child support is similarly a predatory act on women's parts.

I wasted hours reading through threads about pickup techniques, evil ex-wives and how to avoid paying child support. What I learned is that it all comes down to something really pretty simple: the toxic belief that sex is something that men must get from women. It's part of why men have been trying to control women's sexuality since always. Changing these men starts with fixing that mentality, which is by no means limited to the "manosphere" -- just look at the Hobby Lobby decision. TheRedPill mentality is both marginal and completely culturally entrenched.