That drunk Manhattan kid is obnoxious -- but even he deserves privacy 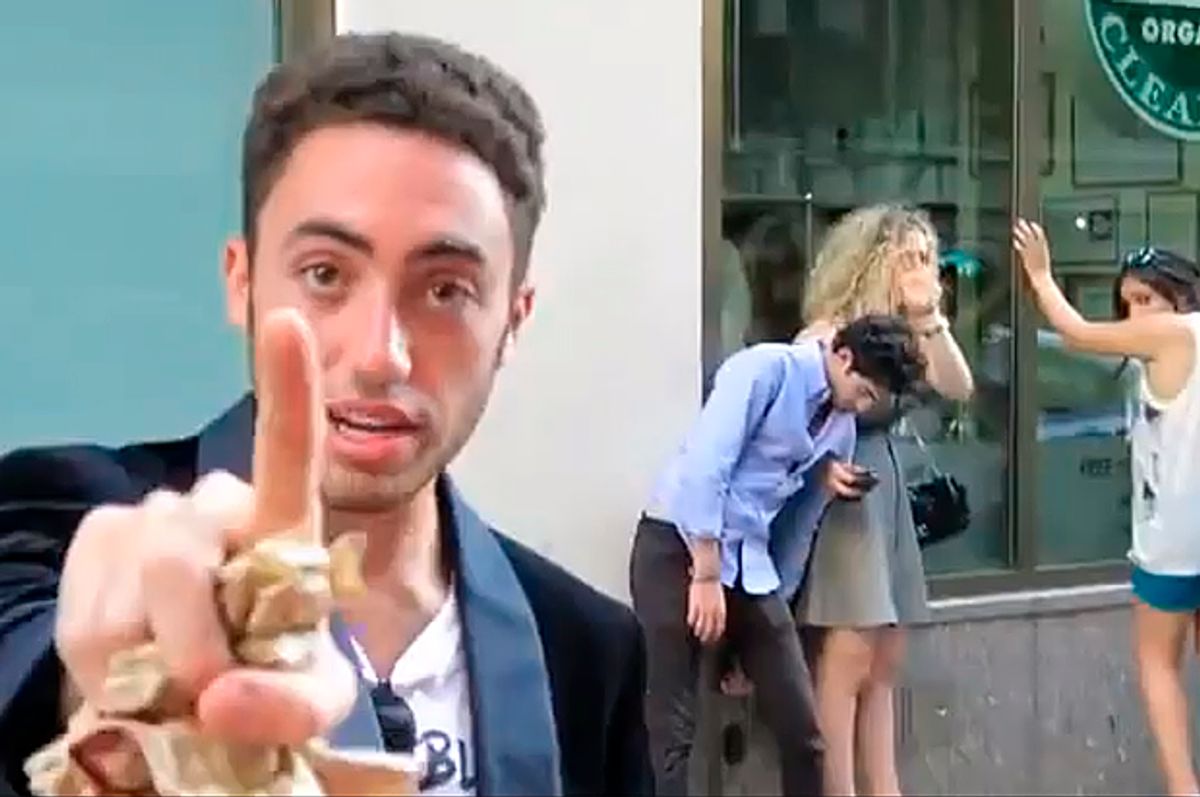 Gerry, the young Manhattan fellow who was caught on video berating a man, is deeply unpleasant. He rants at length about how wealthy he is and how he has the New York police "in [his] pocket." He seems to both be a public nuisance -- stumbling with apparently drunk friends through the city streets -- and possessed of a deeply unpleasant sense of self-worth.

But just how much do Gerry's crimes fit the punishment, from hundreds of Gawker comments to a potentially altered future? Because his identity has been uncovered -- and the NYU student in question has already deleted his social media profiles in advance of what will be a long period during which this is on top of his Google results. No one should be as much of a jerk as is young Gerry -- but most people don't have their worst moments recorded and published online.

The counterargument, here, is that Gerry represents something bigger than himself, the colonizing of New York City by an entire class of NYU-going spoiled brats whose parents foot the bill and who push out hardworking citizens who used to be able to get by. This is both true and a huge problem for the city and the nation. But the video isn't attempting, really, to make any sort of systemic critique -- the videographer begins taping a group of drunk young adults before any of the wild claims about wealth and police influence come up. Gerry is a jerk who drank too much, but is also a jerk in a confusing situation he may never have been faced with before and with a camera in his face. The videographer baits him at every turn like an improv partner trying to keep the game going; the video's just intended to embarrass and shame.

Gerry should feel ashamed! But it's unlikely that a bunch of commenters calling him a jerk is going to make him change his mind or behavior, any more than a spoiled-brat writer for Thought Catalog is going to change the way she acts because of negative commentary. Or that a P.R. executive is going to magically become not-a-racist because Twitter found and criticized her nasty, racist tweet about AIDS in Africa. These people are all pretty unsavory, but they would have in a previous era expressed that unsavoriness in private. Maybe it's a revolution for transparency that they've been able to tank their futures with ill-considered remarks, but why, aside from novelty, should we care?

This college student is among a class of people who are the world's most deluded and annoying -- kids who've been at college enough to feel as though they really can do anything but not long enough to feel the threat of the real world impending. I'm frankly surprised there's not a video of one of his contemporaries leaking daily. Though any consequences from NYU will be characterized as "the Internet" claiming another scalp, that Internet is only a conduit for human interaction. Maybe those covering a 20-year-old can treat him as a mess, but a human one, rather than just an amusing flash in the pan -- in other words, treat him more as a person than he or the videographer treated one another.