Burton spoke to Salon about education activism, Common Core and the future of reading 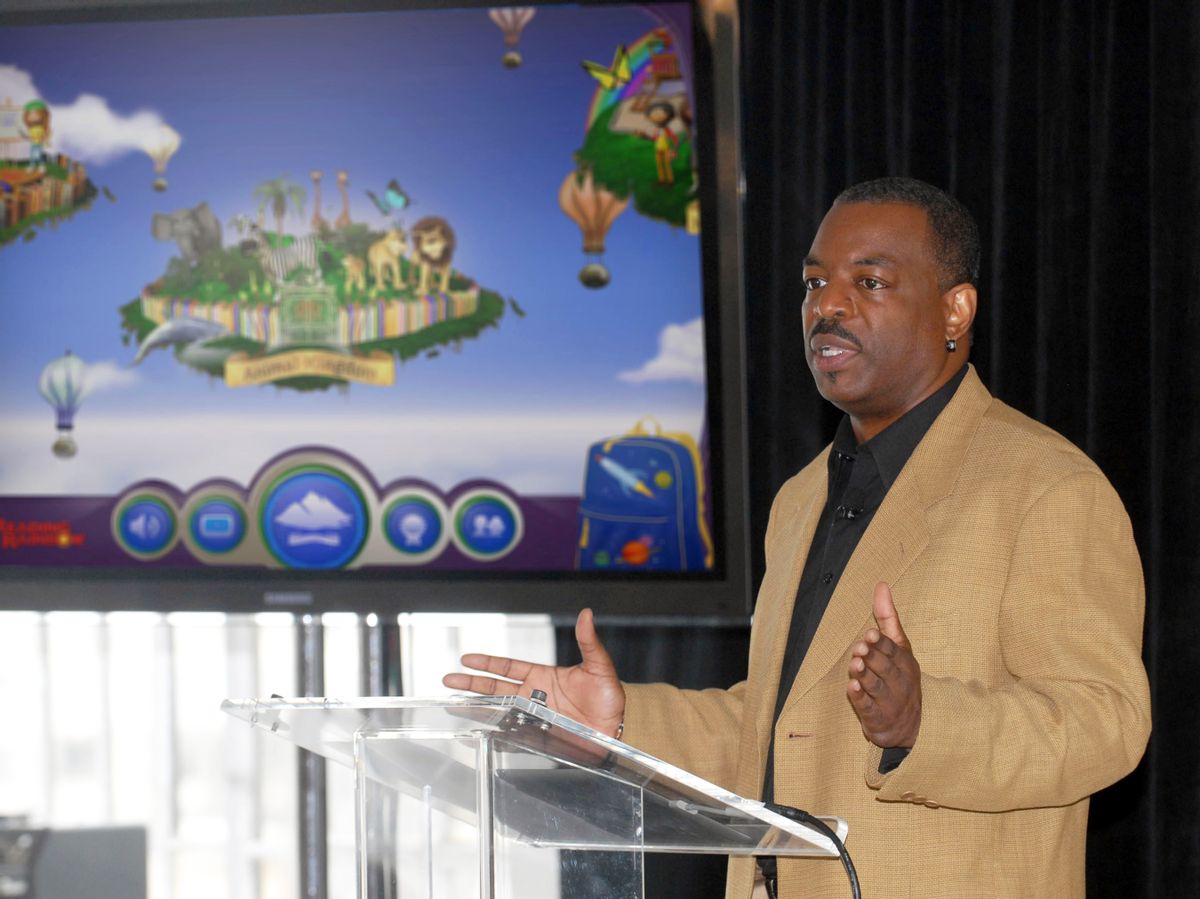 Though it still has a few hours left, LeVar Burton’s Kickstarter campaign to expand Reading Rainbow’s presence in American classrooms on Monday became the most-backed Kickstarter ever with almost 100,000 backers. In the final hours, the frenzy is reaching a fever pitch: Seth MacFarlane has pledged another $1 million if donations reach $5 million, and the top five Kickstarter projects have pitched in to sweeten the deal for future donors. With 24 hours to go, the project is less than $300,000 shy of, effectively, $6 million.

Burton is one of Hollywood’s rare celebrities who has become an icon to multiple generations of Americans for different reasons: known first as Kunta Kinte in “Roots” in the '70s, then as Geordi La Forge in the “Star Trek” franchise and the avuncular host of “Reading Rainbow” from the '80s and well into the 2000s. In 2006, PBS canceled the Peabody and 26-time Emmy Award-winning show, reportedly due to financial issues and a shift in national education priorities. In response, Burton launched the Reading Rainbow app with his company, RRKIDZ, in 2012. The tablet app, which allows children access to 13 million books and video field trips, became the most-downloaded educational app in the iTunes App Store within days.

Though Burton keeps one foot in acting, currently appearing in TNT’s “Perception,” his singular focus right now is bringing Reading Rainbow to more classrooms in America. With six times the funding he expected, he plans to reach 7,500 disadvantaged classrooms, and offer the app on more platforms, like gaming consoles, mobile phones, Android, AppleTV and ROKU. In the final hours of his 35-day campaign, he talked to Salon about the future of Reading Rainbow, his dream for childhood literacy, and tapping into the power of nostalgia.

You’re down to the final hours, and you just need another $500,000 and Seth MacFarlane will donate another million. What’s going through your mind right now?

I gotta tell you, Prachi, this whole month — five weeks — has been so amazing. About half an hour ago, we just passed the record for the most backed Kickstarter ever. I guess I have faith — I have faith and confidence in the people who brought us this far, that they’ll help us get to the finish line and that is my story and I’m sticking to it.

But that faith certainly developed over the course of these five weeks, because when you started out, the goal was $1 million and you even gave yourself extra time as a buffer. So what do you think happened?

I genuinely believe that what has happened here is that the first couple of generations of kids — who are adults now — have really embraced this Kickstarter campaign and made it theirs. And they have taken on the responsibility of ensuring that these next generations of kids grow up with something that -- there isn’t anything like it that’s around these days. No Child Left Behind forced the government to make a choice between teaching us how to read and giving them a love of the written word. And in a healthy society, you don’t make that choice. So these backers believe, as I do, that with the education of our children, we are all stakeholders in that process. And we can’t stand by and expect anyone else to do it for us when we know we have a proven tool that can help us get the job done. I don’t care if this is on a bound book or on a tablet or on a phone, I simply want kids to read.

I don’t think the Common Core will have a negative impact on the Reading Rainbow app; in fact, quite the contrary. We are a library of books, and all of our books are Common Core aligned. Or the vast majority of them are. And the idea of the video field trip is absolutely in alignment with the Common Core, giving children a thirst of literacy about the world around them. And having them apply the knowledge that they’re gaining in any given subject matter to the rest of their world, you follow? On top of that, I just try and stay in my lane, Prachi. Do you know what I mean?

“Reading Rainbow” is expanding from an app, and will be available on pretty much every technological device, now. Do you anticipate kids to be the drivers across all of them?

Absolutely! The whole point of adopting a strategy as Reading Rainbow has from the very beginning -- remember back in the '80s, television was a technology we used to reach kids with the message of, “You can go anywhere, be anything,” right? And we used that medium because kids had already self-selected that as the place they want to be. In front of the TV. You want to reach today’s kids, you’ve got to be in the digital realm. And the whole point of universal access for us, is to be on all of the devices that kids these days have a tendency to migrate toward. And universal access really does mean everywhere for everyone.

What do you say to critics who argue that children spend too much time in front of computer screens now?

That’s the same argument that we heard 31 years ago, when we first started the television show. And you know, the conversation was swirling around if television is going to be the death of the education of our children. I’ve always looked at this issue very counterintuitively. Because to me it’s about access. Reach them where they are and take them where you want them to go.

Do you anticipate a future where we’re using technologies like Google Glass and Oculus Rift for educational purposes?

I could see that, certainly.

What do you think are the next, big, up-and-coming technologies for education?

(Laughter) I haven’t an idea, I haven’t a clue! I’m not a technologist, I’m an educator!

But as an educator, you’ll probably think of a new way to reach a new generation with Reading Rainbow in another 20 years.

My goal will be that in whatever direction technology evolves, figure out how to deliver the Reading Rainbow product, on that technology, to that new generation.

One of the big points of criticism against your Kickstarter has been that not everyone has access to basic technology. What’s your response to that?

That’s why we were so keen on getting the product to the Web. Because even if you come from a family that has no financial wherewithal to access these technologies, where is your child more likely to encounter this technology? In school! So being on the Web and being in classrooms is really critical to our mission!

And how are you going to prioritize which classrooms get access?

We are working with everyone from the Department of Education to organizations — I’m here in Atlanta now, at the ISTE convention of about 16,000 teachers who use technology in their classrooms. We’re reaching out to everybody to help us in this effort of identifying the right schools. We will probably go in the direction of Title I first.

What made you want to revive the show via a tablet app two years ago?

I saw that there was a need for it. There was — again, reading and comprehension skills of our nation’s children have been plummeting over the last 10 years. One in four American children are growing up functionally illiterate. That’s just not OK with me. And in Reading Rainbow, we have the proven tools that works. So one door closed; the PBS model was no longer available to us. So I figured out another way to get it done, through private investors. And then the venture capitalist community was very slow to respond to my business plan. Meanwhile, the Reading Rainbow app is the No. 1 educational app in the iTunes Store, in the App Store. But being on the iPad and the Kindle Fire isn’t going to get it done. It just doesn’t reach enough people — universal access, Prachi. That’s what I’m about. That’s what I’m going for.

Speaking more broadly than even Reading Rainbow, what do you think are some of the biggest hurdles to universal access to literacy and education in America?

There are plenty of hurdles. One of the hurdles is all of the money that has been diverted in recent years to war and the machinery of war. We sacrificed our kids and their education with our focus on conflicts around the globe. We’ve got a serious issue right here at home. And if we don’t educate our children, we will not be able to compete on the world stage in anything but war ... and that’s not the America that I believe in.

What are some of the challenges that you’re facing with integrating multiple platforms of technology?

Well, to be honest, right now, all we’ve been able to focus on is this Kickstarter campaign. It’s a great problem to have, but it has taken up all of our time, effort and energy. Once this is over in a couple of days, we can then take a deep breath and get back to the business of figuring out fully the next step.

Do you have a timeline for deployment?

We’ll have our product in classrooms in six to nine months.

One of the most amazing aspects of this Kickstarter, to me, is that it demonstrates how powerful nostalgia can be. It feels like the Internet has found a way to amplify the effect, because you’re getting this instant feedback from everyone who was touched by a show like “Reading Rainbow.” What’s the funding model going forward, beyond the Kickstarter campaign?

Well, we’re setting up a website to get folks to donate beyond the campaign itself. The campaign expires in about 51 hours or so. And I really hope that there is enough interest in what we’re doing and enough support that perhaps we could go on and raise enough money so that there would be a permanent endowment so that we could continue to give the product away to more and more classrooms in need.

I don’t know that it amplifies it necessarily, but it certainly does tap into it and gives everyone a point of focus. I think this campaign has been exactly that — a point of focus where everyone can, everyone has had an opportunity to go back to that time in their childhood where they really felt like they were really getting something good in Reading Rainbow. And it triggered a response in them. A response that made them go into their pockets and say, ‘This is good! This needs to be continued. This needs to be ongoing. We need to make this happen.’

Say you could tap into something that really shaped your childhood and see that return in a new, modernized way to reach audiences now, what would that be?

I think in some ways that this Kickstarter is tapping into a similar spirit, by getting people to really make a pledge to make a change.

I think you’re right. I totally agree with you.

But I have no idea how one would do that in pertaining to the civil rights movement in a modern era.

[Laughter] I don’t know either.

If there were to be a "Star Trek" reboot and Geordi was recast, is there anyone you’d love to see play that role? Or, would you be interested in it?

Let’s see … sci-fi that’s on TV right now. I caught the end of "Defiance" last year on the SyFy Channel, and I really liked that. I like "Defiance." My current jones, though, is "Penny Dreadful."