Penn Jillette: I didn't want to be a stereotypical Hollywood liberal

The magician on his new documentary, free-market capitalism and why chiropractors are snake-oil salesmen 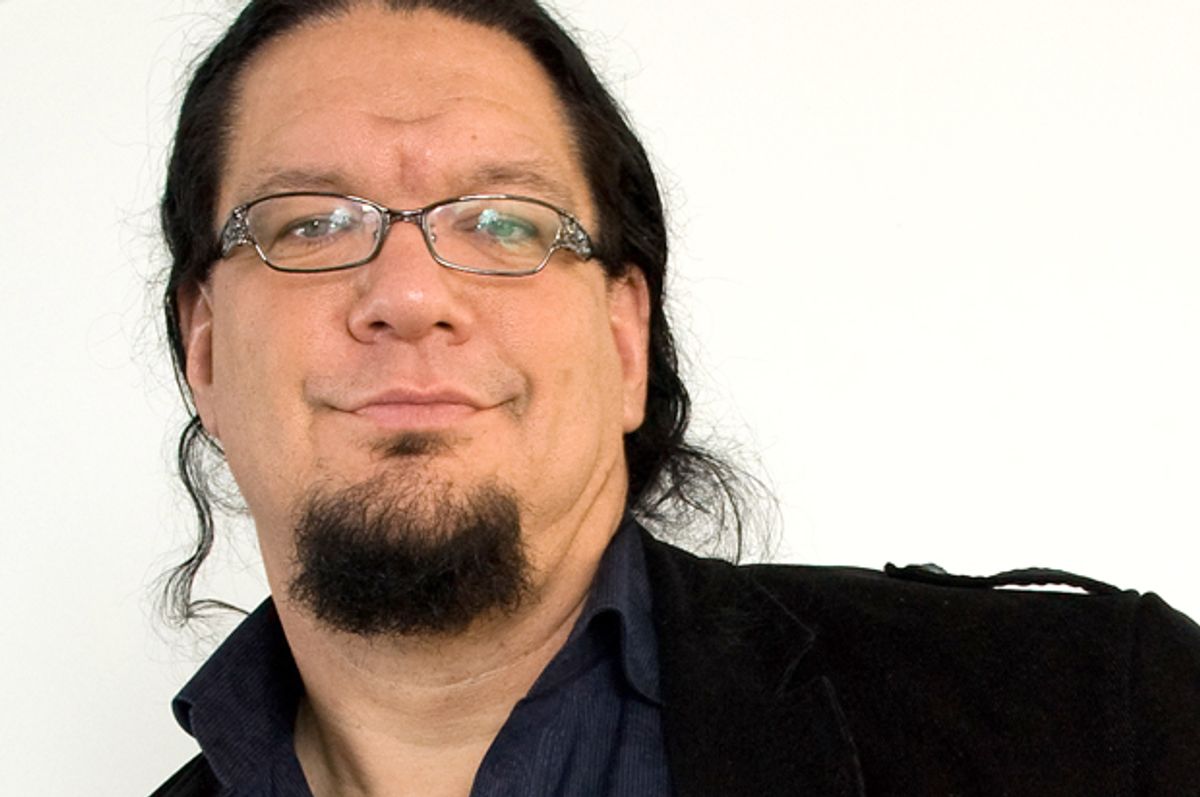 Penn Jillette has, as always, a lot to get off his chest.

In an interview with Salon, the producer of "Tim's Vermeer," recently released on DVD and Blu-Ray, discussed why he thinks the concept of "genius" is often used as "an excuse for laziness." The film, generally acclaimed, examined one unschooled painter's attempt to perfectly re-create a painting by Vermeer, long regarded as a genius painter of light and shadow.

For his part, the magician and filmmaker says that Tim Jenison, the subject of "Tim's Vermeer," converted him to libertarianism after years as a liberal; the undercurrent of free-market notions (anyone could be a Vermeer if they put in the sweat equity!) somewhat colors "Tim's Vermeer." Of Hollywood, Jillette said, "I think it’s a culture that’s just very, very smart people who think they have something they don’t deserve."

What point were you trying to make with this movie?

There’s this thing that we do, that people tend to do, where we use the word "genius" as kind of an excuse for laziness. Bob Dylan is genius, Miles Davis is genius, Vermeer’s a genius. And sometimes we use that word to mean -- they were just able to do this from birth and I’ll never be able to. One of the things with "Tim’s Vermeer" is to show that Tim’s ability is just plain hard work, sweat equity, and that amount of work and struggle can actually do beautiful things. And I think that sometimes "genius" is not so much a compliment as it is a way to discount a kind of work and focus and attention. Just like we say the word "obsession," when we might just mean willing to work hard on something beautiful. The more we worked on the movie, the more people we talked to about it would say, "Tim is just obsessed." It was more and more clear that we just wanted to say no, no, it’s just called working really hard.

That ties into a critique I've seen of the film -- that the film discounts the idea of individual genius. Saying like, well, you can create a Vermeer using technical tricks, but it’s not a Vermeer because it didn’t come from the hand of Vermeer.

I don’t know. Of course, it’s true that if it’s not from the hand of Vermeer it’s not a Vermeer -- that’s a simple tautology, really. And we’re not trying to make the point that Tim is on the par of Vermeer, and there’s no attempt in any way to show disrespect for Vermeer. If you think about the amount of work that goes into it -- of course, the composition, the beauty is all Vermeer, and Tim would never claim he’s trying to be on par with Vermeer. But I don’t think there’s anything magic or anything sacred about seeing Bob Dylan’s notebooks, to find out that there’s certain Japanese poetry Bob Dylan read, or certain books about the Civil War that Bob Dylan read, do not take away from the beauty of his work, it just makes the work of the human and individual even more glorious.

Is there anything that you’ve created in your career, that you feel proprietary over, that you would not want someone to re-create in this way? Some trick, rhetorical style or flourish?

Well, that’s a very different issue. But I think I can give an answer. When I was younger, I was very, very worried about anything that looked like it overlapped us. Not just from people looking like stuff I did, but also when they did, more importantly, stuff that I did, looking like something someone else had done. I just so, so desperately did not want to be seen as borrowing or learning from anyone, I just wanted to really feel like I had an area that no one else was drawn toward. As I grew older, I realized that -- as Bob Dylan said, the purpose of art is to inspire. And I think that I’m less concerned with having my mark on something or having something distinctive as I am in terms of the motive these are created. I think that someone else trying to understand what we do would be mostly flattering. I mean, there’s no sense even for a moment that Tim was saying, This is Tim’s work. It’s called "Tim’s Vermeer," with the accent on the "Vermeer." I don’t think we would ever deserve the respect that Tim shows Vermeer, but if someone were to try to re-create something with the kind of love that Tim demonstrates, I think I would be nothing but flattered.

It strikes me that "Tim’s Vermeer" plays into kind of a continuous theme of your career: Pulling back the curtain on things. Is that an accurate assessment?

I would say it a slightly different way. When you say pulling back the curtain, there’s a bit of a sense of busting there, and I’m not as interested in that as it would appear to be from doing a show called "Bullshit." I’m really fascinated in how the mysteries of the heart can be created. I’m fascinated by that. I’m fascinated by the fact that you can have an idea that is really a part of who you are and really appealing and really something very intangible, and through work and focus and, in my case, trickery, you can create that feeling in another person.

What are you referring to, specifically?

Snake-oil salesmen; alternative medicine people. Chiropractors. I mean, all the people we cover are bullshit. Umm. Some of them are self-deluded, but it’s really tough to intervene. You know, I was horrified by that when I was younger. I wanted nothing to do with it, because I didn’t want to lie. And what’s fascinating to me is they put a proscenium around the lie; it all of a sudden becomes moral. Or rather, not immoral. You know, if Robert De Niro were to run around New York saying his name was Travis Bickle, and he was a taxi driver, it wouldn’t help the world at all. However, his ability to make believe that he’s a taxi driver named Travis Bickle so perfectly is enriching what you do with the name "art." And I’ve always found that fascinating.

I wonder if you could look at Tim as in any way connected to your firmly outspoken belief in free-market capitalism.

I used to be kind of your standard-release Hollywood liberal. And it was Tim's views -- his love of individualism and his love of accomplishment, his love of enterprise, his love of entrepreneurship that really, as I became close to Tim, really turned me around. Tim’s idea of the individual is a love of being able to fight for something in a free-market situation. It’s really inspiring and life-changing. And part of what you see in "Tim's Vermeer" is that kind of stick-to-it-ive-ness. They will never call it genius, they’ll only call it hard work. And there’s something that’s so, so beautiful in that. I mean, the fact that anyone is willing to work that hard on something is kind of beautiful.

Given that you describe yourself as having been liberal in the past, why do you think performers and entertainers are stereotypically liberal?

I don't know how it ends up being that way. The people who get scared of me politically and are more liberal -- the one thing I’ll never question is their motives. That’s something that breaks my heart is that when people disagree, they question the other person’s motives. Watching people less fortunate than yourselves, wanting to make people kind of on an equal footing and wanting to help people is nothing but good. We all want that, how we accomplish it is what we’re disagreeing on. And I think that’s important to remember. And I think that it’s a culture in Hollywood that’s just very, very smart people who think they have something they don’t deserve. And in some cases, you know, what hurts you the most is things that come too easy. There’s this article a few weeks ago called "Advice for a Happy Life." And one piece was "earn everything." And I really think that much better than the feeling of having things is the feeling of having earned things.

Are you worried that your career could eventually end if you say something that people took strong offense to?

Well, I don’t want to whine here. Of course, I worry. I mean, I feel worried about that all the time. But maybe not to the level you’d think I would. It's my job to try to -- when you decide to go into the arts, it’s your job to try to communicate and you definitely should know what you’re doing and thinking. I mean, that is, that is the job description, a very broad definition of "art." What you’re trying to do when you go into a piece of art, whatever that is, whether it be a painting or whether it be a radio show or whether it be pornography is not to spend so much time worrying about how people are going to react to what you say. If you do, you may just have no reason for what you’re doing. So yeah, I worry, but if I worried too much,  I’d need to quit my job. I mean, there’s no other way around it.