Alito could have been stopped: Why Dems should have filibustered the radical

The man who has wreaked havoc on this country could have been avoided altogether. Here's why it never happened 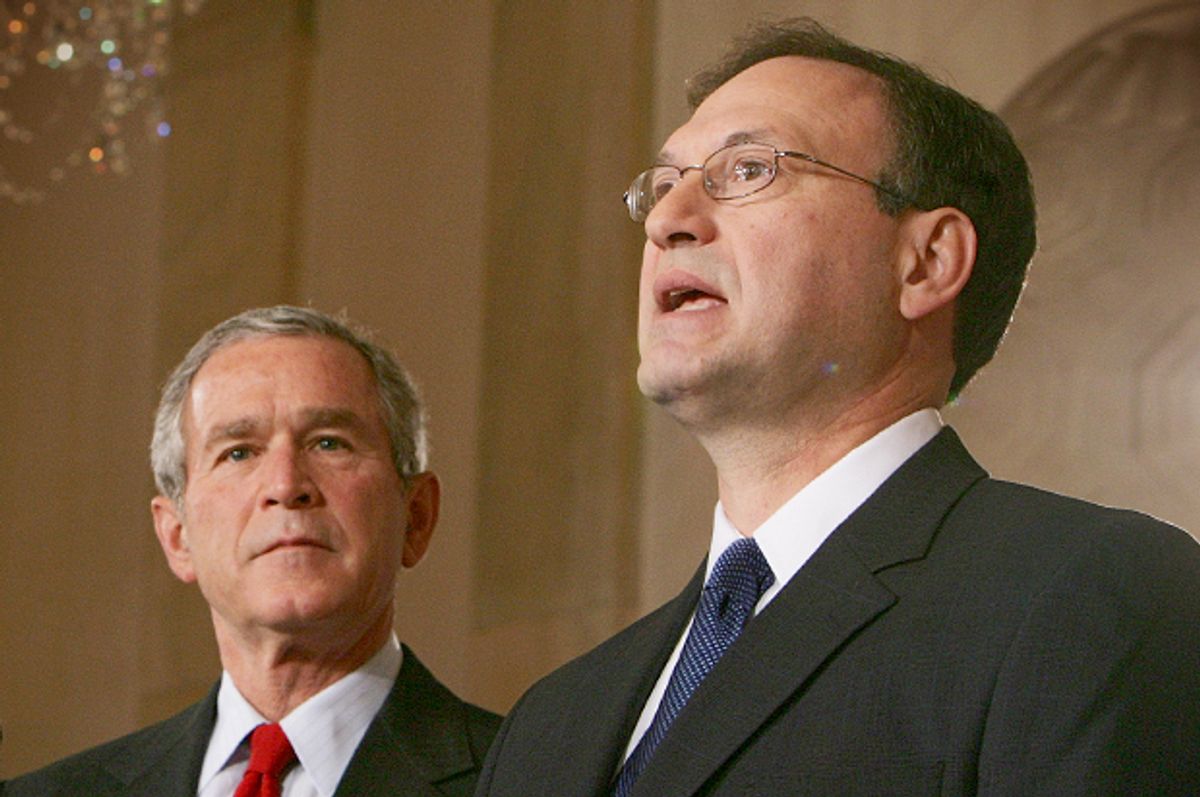 One of the biggest "tells" in our modern political life is the extent to which the mere mention that Justice Samuel Alito will deliver the majority opinion in a Supreme Court case strikes terror into the hearts of anyone who isn't to the right of, well ... Samuel Alito.

Sure, an opinion written by Clarence Thomas is sure to be ultra-conservative, but there are enough examples of his idiosyncratic approach that there's always the possibility that he's gone off the reservation. And yes, Scalia writing a majority opinion is almost always bad news, but every once in a while he comes in on the libertarian side of the dial so there's always a sliver of hope. Chief Justice Roberts can cobble together an opinion with a little bit to like and hate for both sides from time to time.

All of them are staunch conservatives whom liberals have no reason to be happy to see delivering a majority opinion. But for unadulterated partisanship dressed up as scholarship there are none with as perfect a record as Justice Alito. He's purely partisan, without deviation. And he's also very, very smart, confidently delivering the now predictable one-two punch whereby the conservative majority only partly strikes down long-standing precedent while signaling to the conservative legal community exactly what they'll need in future cases to blow the whole thing to smithereens.

This excellent Alito profile by Ian Millheiser at Think Progress featured this dramatic conclusion showing just how formidable a right-wing judicial assassin he really is:

In 2005, When President George W. Bush announced Alito’s nomination to the Supreme Court, he praised his nominee as someone who “understands that judges are to interpret the laws, not to impose their preferences or priorities on the people.” Less than a decade later, Alito rewrote American religious liberty law, and he did so despite an explicit statement by Congress indicating that Hobby Lobby should have come down the other way. Along the road to Hobby Lobby, Alito made the workplace a harsher, meaner place for women. He inspired talking points for Ted Cruz. And he has an unblemished record as the most committed partisan on the Court.

Alito is 64 years old, young by Supreme Court justice standards, and has a lifetime appointment.

Reading that quote about not imposing "preferences or priorities" from George W. Bush one couldn't help harkening back to the earlier day when he nominated his close associate Harriet Miers and was immediately put in his place by his bosses in the conservative movement. Recall that his close advisor Ann Coulter said at the time:

[S]ome jobs are so dirty, you can only send in someone who has the finely honed hatred of liberals acquired at elite universities to do them ... Conservatives from elite schools have already been subjected to liberal blandishments and haven't blinked. These are right-wingers who have fought off the best and the brightest the blue states have to offer. The New York Times isn't going to mau-mau them — as it does intellectual lightweights like Jim Jeffords and Lincoln Chafee — by dangling fawning profiles before them. They aren't waiting for a pat on the head from Nina Totenberg or Linda Greenhouse. To paraphrase Archie Bunker, when you find a conservative from an elite law school, you've really got something. However nice, helpful, prompt and tidy she is, Harriet Miers isn't qualified to play a Supreme Court justice on "The West Wing," let alone to be a real one.

The qualification, you'll note, wasn't the allegedly superior law school degree but rather the "finely honed hatred of liberals." Bush listened, he learned, and he nominated Alito, a hardcore right-winger best known for his view that strip searching 10-year-old girls without a warrant was perfectly acceptable. Liberals everywhere went ballistic. After all, the justice he was replacing was Sandra Day O'Connor, a moderate swing vote, not a rigid ideologue as he clearly was. The court's tilt to the right would be precipitous.

Since the Senate was then in Republican hands, petitions went out, calls were made, all the liberal organizations from People for the American Way to MoveOn to the liberal blogosphere mobilized their members to tell their Democratic senators to filibuster this nominee. Sen. John Kerry announced his intention to do it and was joined by others including then Sens. Barack Obama and Hillary Clinton. It was considered a very aggressive move but it was the only way to prevent a decades-long right-wing majority on the Supreme Court.

The conservative movement and its propaganda arm mobilized as well and launched one of the most impressive manufactured hissy fits ever seen in the halls of Congress, much of it led by the lugubrious and overwrought senator from South Carolina, Lindsey Graham:

The most dramatic moment of the day came when the judge's wife, Martha-Ann Bomgardner, who had been sitting behind him, left the hearing room in tears. She left when Senator Lindsey Graham (R-S.C.) was apologizing to Alito for his treatment by the opposition. Graham, who was present at a White House preparation session for Alito, mocked Democrats for their relentless questioning about the Princeton group by asking Alito rhetorically if he is "really a closet bigot." After Alito replied that he is "not any kind of a bigot," Graham continued: "Guilt by association is going to drive good men and women away from wanting to sit where you're sitting.... Judge Alito, I am sorry that you've had to go through this. I am sorry that your family has had to sit here and listen to this."

After a break, the judge escorted his wife back in. Conservatives seized on the incident to complain about Democratic "bullying," and said they plan to make the incident a cause celebre. "When will the media shame these people for their behavior?" Sean Rushton, executive director of the administration-friendly Committee for Justice, asked in a blast e-mail to journalists. The always-alert Creative Response Concepts, a conservative public relations firm, sent this bulletin: "Former Alito clerk Gary Rubman witnessed Mrs. Alito leaving her husband's confirmation in tears and is available for interviews, along with other former Alito clerks who know her personally and are very upset about this development."

If there had been any hope for a filibuster, it went down the drain with Mrs. Alito's crocodile tears. Nineteen Democrats crossed the aisle to defeat the filibuster. The political establishment congratulated them on their decorum, emphasizing how important it was that a president be allowed to choose the judiciary of his choice during his term.

Then along came Barack Obama:

It got so bad that the Senate ended the filibuster of court nominees altogether. The federal bench was turning into a ghost town. (It's true that Republicans generously allowed Obama to replace two retiring liberals on the court with liberals. It's not hard to imagine what they would have done if he tried to replace one of the others, however, is it?)

Imagine if those 19 Democrats hadn't crossed the aisle that day and the filibuster had held? Yes, they would certainly have been roundly excoriated by the Beltway Tabbies who insist that the only thing that matters is good manners (an admonition to which only Democrats ever pay attention). Imagine if they had demanded that Bush appoint someone with a more moderate record to replace O'Connor? Imagine if they'd played the same game that the Republicans have mastered -- "do as I do, not as I say?" We'd be looking at a different America today -- and for decades to come.