SCOTUS' real lesson this week: The law is not your friend

Workers hold a self-defeating reliance on the law as our protector. Far more often? It's played the opposite role 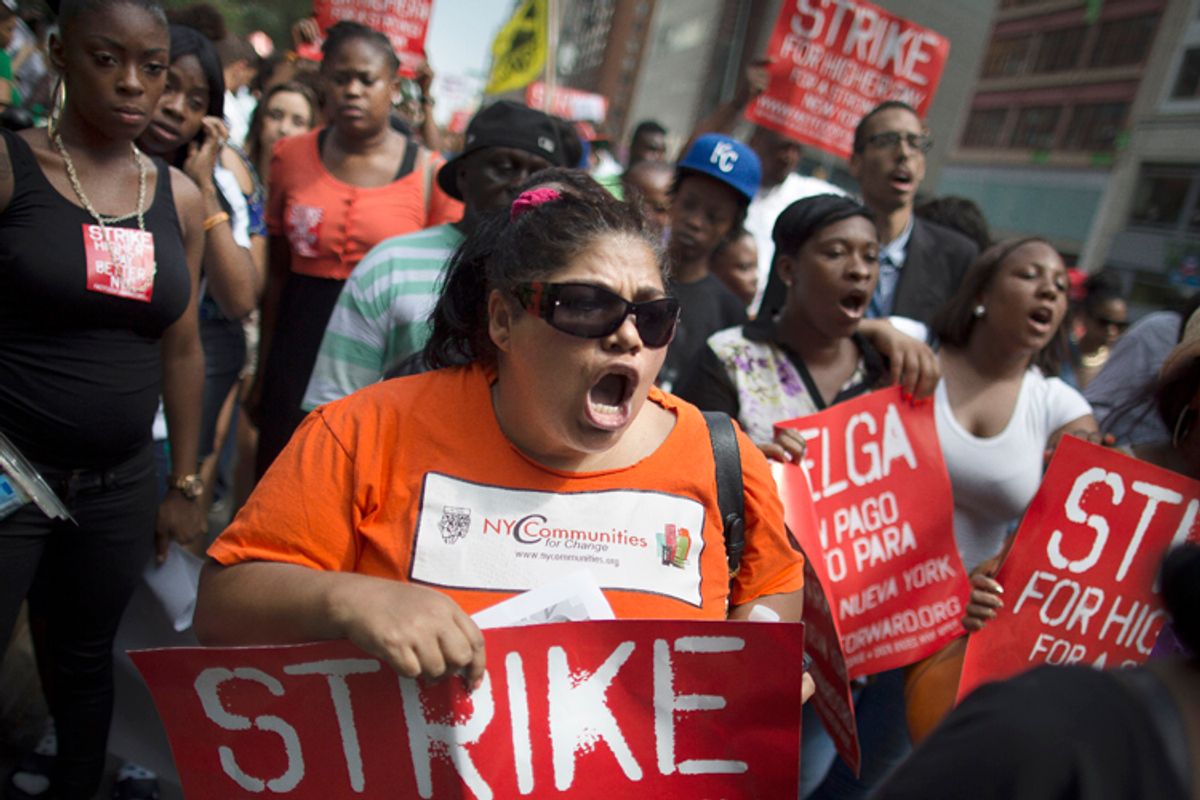 In the wake of Monday’s anti-union Supreme Court decision in Harris v. Quinn, I’ve been reminded of when I discovered organized labor as a small child. From an early age, I’ve been enthralled with the idea of the strike. To date, all of the gains made by working people have required a healthy disregard for the law. Any future rejuvenation of the labor movement is going to require the same.

The lesson: For workers, the law is not your friend.

Pinning the blame on the conservatism of the Roberts court is cheap analysis when it’s the nature of the court itself that stands in opposition to the interests of the working class. As Rob Hunter points out in Jacobin:

Unlike the political institutions of republican France, the institutions established by the Constitution are elite-dominated, decentralized, and marked by few opportunities for direct participation by the people. These are the institutions defended by the Supreme Court when it reviews the constitutionality of legislation. In this way, the Court participates in American politics mainly by attempting to frustrate the exercise of democratic power.

SCOTUS, in other words, is always going to be antagonistic when the law itself is the problem. Legal protections like the weekend, the minimum wage, the eight-hour workday, the 40-hour week, and prohibitions against discrimination are of incalculable value. Perpetually orienting ourselves solely toward gratitude for past victory, however, deludes us into a self-defeating reliance on the law as our protector. Much more consistently, it has played the opposite role.

It wasn’t so long ago that former union president Ronald Reagan used the cloak of law to break the air traffic controllers’ strike, an act often seen as the opening salvo in the 30-year war on workers that continues to this day. Yet Reagan’s heavy-handedness was not innovative so much as it was a return to time-honored tradition. Concessions like the eight-hour workday were not granted out of some inherent justice found in the golden hearts of enlightened politicians. They were only granted when the torches were at the gates and those in authority had no other choice – and only then after well over a century of fighting.

Work stoppages have today become so tame and infrequent that the once-radical act has been reduced to quaint pageantry. From this vantage point, it’s hard to imagine the 19th-century labor warriors fearlessly executing general strikes. That’s when nobody goes to work. From the 1835 general strike in Philadelphia to the nationwide unrest of May Day 1865 – which culminated in Chicago with the police massacre of strikers and the false trial and execution of labor leaders – Washington only agreed to codify an eight-hour workday with the 1916 Adamson Act when they were finally too exhausted to deal with a strike that had the potential to paralyze the nation’s railways.

Up to this point, as “illegitimate” work stoppages served as the only tool available to ordinary people, business owners were legally allowed to employ their own little mercenary army – the Pinkertons – to beat and shoot their own workers. Actual police were used to arrest and even kill strikers and protesters, and the courts were used to lock them up (and sometimes to also kill them).

Things got a lot less bloody after 1916, not because the system magically started working for workers but because crafty legislation became the standard operating procedure for the institutional neutering of organized labor. The 1926 Railway Labor Act legitimized railway workers’ unions while banning strikes that would actually stop trains. The 1935 Wagner Act legitimized unions much more broadly, providing key protections aimed at staving off general strikes and other radical activity. It was revised with the 1947 Taft-Hartley act, a precursor to today’s “right-to-work” bills that dramatically curtailed which types of activity were “permitted” to unions. It’s no accident that this is the law invoked by Reagan to crush the air traffic controllers. It’s because of these – and subsequent – pieces of legislation that most forms of strikes are, in fact, “illegal.” It’s the law that says workers can only make demands in polite, nonthreatening ways that are, frankly, unpersuasive to employers.

Compounding the problem, those in contemporary union leadership rarely serve as the bulwark against oligarchy they make themselves out to be. The SEIU, which has the most to lose from Harris v. Quinn, is famous for its all-compromise-all-the-time tactics despite its size and influence. Objectively, it’s not hard to see why some workers might not be enthused about forking over their dollars to a defanged bureaucracy committed to pretty much nothing and massive spending in federal elections on behalf of a party that never does much of anything for workers. A compelling argument can be made that this dynamic was very much at play in the UAW’s narrow defeat in a unionization drive at a VW plant in Tennessee.

Liberals and those on the left speak frequently of “grass-roots,” “bottom-up” movements and a “reinvigorated labor movement.” When the Supreme Court issues a bad ruling, it should serve as a reminder that none of these things are ever born of deference to legal restriction, reliance on legal protection, or even in the kitschy legitimacy found in the embrace of professional big labor.

Sam Alito wrote a pretzel-logic majority opinion proclaiming that tens of thousands of workers who get paid by the government aren’t public employees, because they’re just not. When you’re a worker who gets paid with public funds but still isn’t a public employee, that means you have the right to freeload the pay, health and other benefits won solely by your union and still maintain your anti-union values by refusing to contribute financially like everyone else. Alito and the other justices who supported the majority opinion actually wrote this bizarre argument down and signed their names to it. We shouldn’t kid ourselves – there’s no silver lining here.

Certainly, the outrage over Harris v. Quinn is both justified and necessary. The true challenge is that of taking the next step -- if that outrage may compel us toward an honest assessment of the way forward, that it may be channeled into a developing willingness to step outside the bounds and demand a better life.