Sexual assault survivor George Will dismissed in his column fires back: "I'm tired of being afraid"

Will used Lisa Sendrow's story as a prop in his column dismissing rape survivors. Now she's fighting back 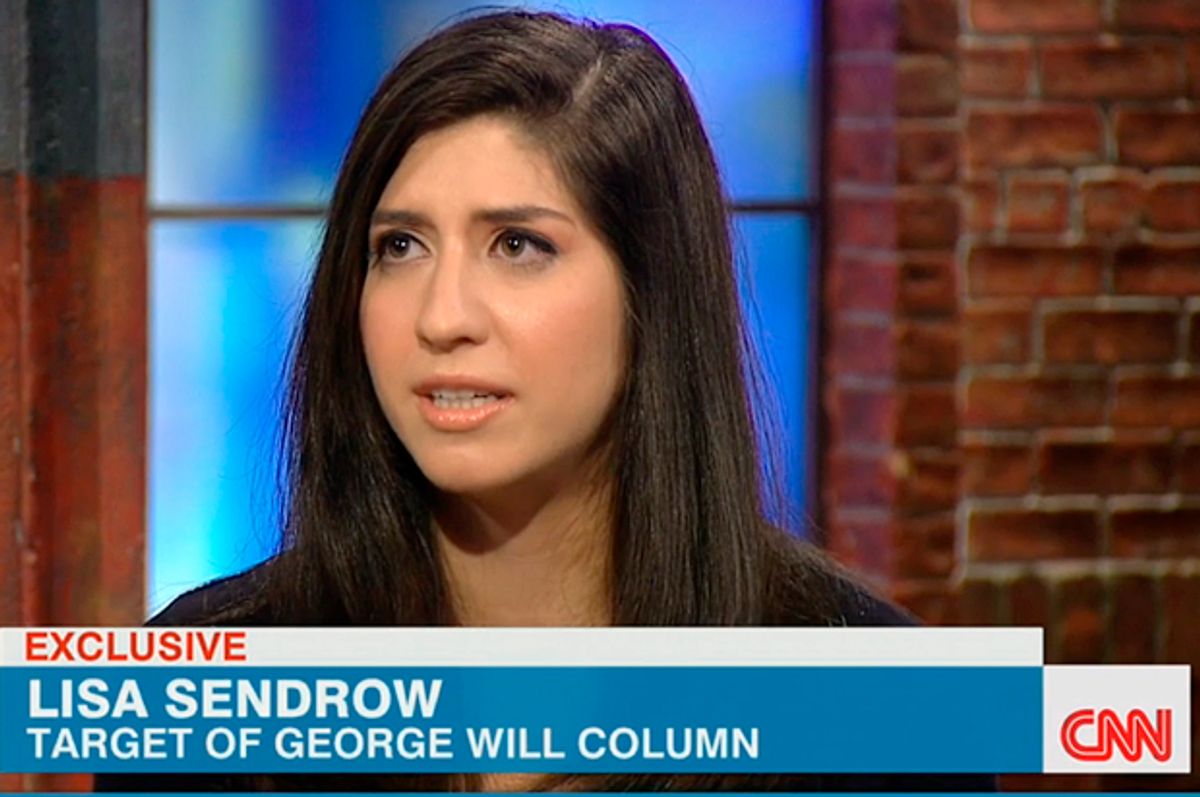 Last month, Washington Post columnist George Will wrote that being a victim of sexual assault is a "coveted status that confers privileges," and suggested that most sexual assaults are actually "ambiguities of the hookup culture" -- not crimes. In order to make his point that survivors concoct stories of sexual violence in order to tap into these supposed privileges, Will cited -- but did not name -- a survivor who shared part of her story in a Philadelphia magazine feature on sexual assault at Swarthmore College.

That woman is now speaking out, and firing back at Will for using her experience as a prop in his column.

Lisa Sendrow appeared on CNN on Wednesday, and had this to say to Will:

Sendrow addressed the consequences of Will's column head on, saying that media ignorance about sexual violence makes it harder for victims to come forward. But when women like Sendrow and men like Michael Skinner come forward, it creates space for other survivors to do the same. And when survivors make the decision to speak publicly, it shapes the conversations we're having for the better. It's harder to be callous and ignorant about an issue when you're confronted with the real people who have lived it.

In a follow-up statement, Sendrow said:

I am tired of survivor's experiences being dismissed, diminished, and brushed aside. We are being treated as criminals and are further victimized by people like George Will, making many of us afraid of speaking out. The truth is that the vast majority of survivors don't want to run this gauntlet of public scrutiny, don’t feel that they will receive the necessary emotional and physical support and will not ever report. We will never end epidemic rape on campus if we continue telling survivors they deserved whatever happened, or that ‘no’ is not enough, or that rape is only rape if you are in a back alley and pushing and screaming. I no longer want to be afraid of the consequences, and that’s why I am speaking out.

Hopefully Will is paying attention.