The problem with gay advertising

Chevrolet, Allstate, Honey Maid -- why is it so hard for these companies to pander without condescending? 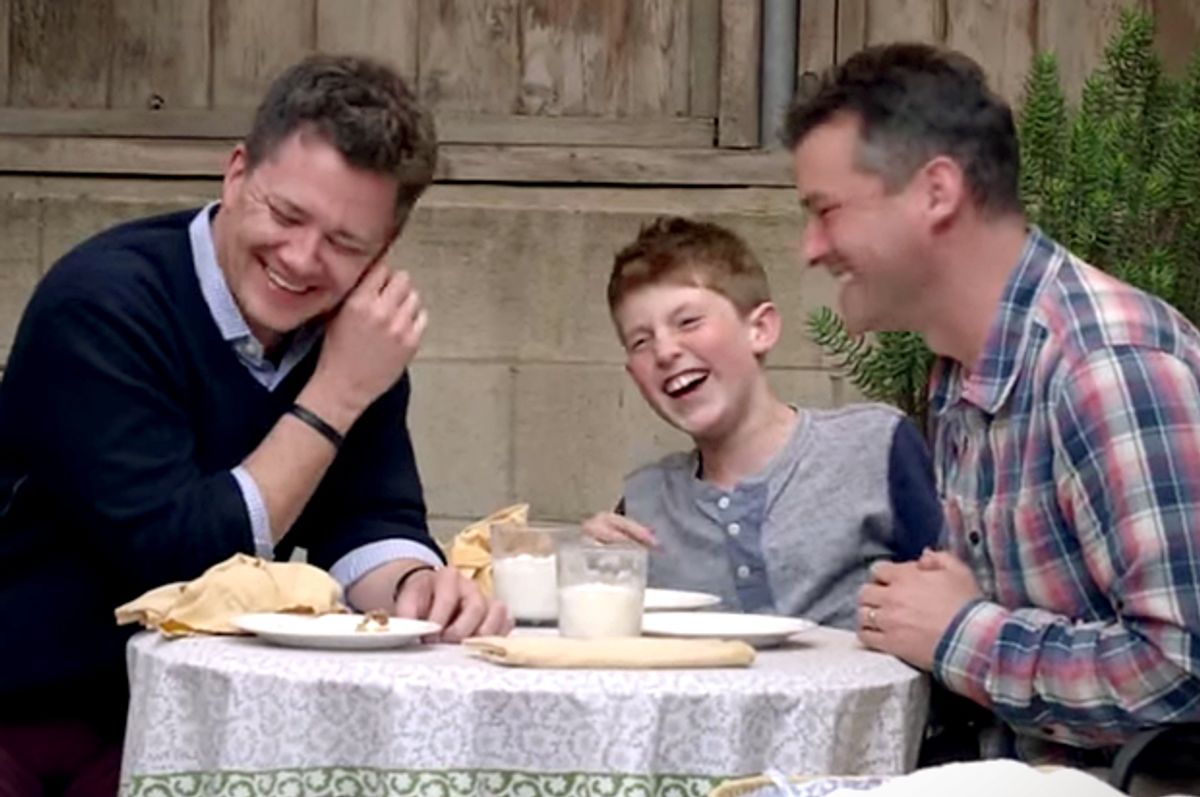 NPR this week ran a story that will surprise no one who's picked up any gay-interest magazine over the past several years: advertising, more and more, is aware that gay people exist and is thus pitching products at that share of the market. And so, this being advertising and not social work, gay people are naturally treated less as people and more as unthinking money dispensers for corporations. Said one Adweek staff writer: "If you're not appealing to every minority community, be that racial or in terms of sexual orientation, you're missing out on market share."

That's right -- appealing to minority communities is what corporations should do in order to make sure they don't miss out on those sweet gay dollars. It's transparently what advertising has always been about, but in an era in which high-profile ad campaigns like the Cheerios spot featuring a multiracial family have been treated as a self-explanatory social good, the discerning gay consumer will hopefully not be too swayed by ads that are meant just to cash in on demographic identity.

After all, the inclusion of gay families in a new Chevrolet ad campaign is notable just because, as the NPR piece points out, for so long most non-tobacco or -alcohol brands wanted nothing to do with gay people. It was only when the prospect of potentially alienating what the Adweek writer calls "Mr. and Mrs. Main Street Heterosexual USA" was outweighed by the upside of reeling in gay dollars that a brand deigned to engage the idea of gay people at all. The ad is a fairly condescending one, indicating that Chevrolet is safe enough for "whatever shape your family takes." (You mean the airbags won't be filled with mustard gas because I'm gay? Thanks!)

On the one hand, it's rather a shame, if a predictable one, that gay people weren't engaged in any meaningful way by advertisers for so long. On the other, it was kind of great not to have to pretend that every time a gay couple or family appears in an advertisement that it's an inspiring work of art. An Allstate ad that J. Bryan Lowder described, on Slate, as "deeply poignant" strikes me as deeply manipulative. I hardly need my insurance company (if I ever were to have one...) to be my cheerleader and ally, reassuring me that Gay is OK. As the wrapping for the special gay-pride-themed Whopper sold by Burger King has it, "We're all the same inside." If that's the case, then why are only gay people the targets for pandering messages about equality?

And yet ads featuring gay people tend by and large to carry explicit messages that whoever you are, however you live your life, you have worth: you are kind, smart, and important. It's hard to imagine a Chevy ad featuring only straight families not merely because that'd be a faux pas but also because ads directed at straight people are just ads, not self-esteem boosters. It's one thing that companies are seeking the gay market share -- they'd be stupid not to. But time and again, from Chevy to Allstate to Honey Maid, said gay-market-share seeking takes the form of straightforward emotional manipulation. And Honey Maid's mini-documentary about two self-described "kind of traditional guys" who got married is really the worst sort of baby-splitting compromise -- is there some way they could have appealed to a gay audience without so straightforwardly advocating one manner of being in the world?

Maybe the issue is that because homosexuality -- unlike race, say -- is invisible, advertisers feel they must state as loudly as possible that the characters in their ads are gay. And since these days being a gay character in the media means being very specifically identified with the marriage equality fight above any personal characteristics, these characters must be treated as brave and special. The sort of martyrdom gay folks experienced in movies 30 years ago is recast with a happy ending.

Maybe it's me, but when I'm watching ads, I don't think about whether the people trying to sell me a car or graham crackers are straight or gay. They're just a conduit for a straightforward marketing message. Introducing hazily pro-equality messages into that mix in order to convey fellowship is a queasy combination. If companies want my or other gay people's business, they can start by treating us as intelligent enough to distinguish real solidarity from salesmanship.