Why celebrate the "Seinfeld" anniversary? Jerry Seinfeld himself doesn't seem to care about his legacy

The comedy star has been appearing in junk projects for years. ("Bee Movie"?) The anniversary of "Seinfeld" is sad 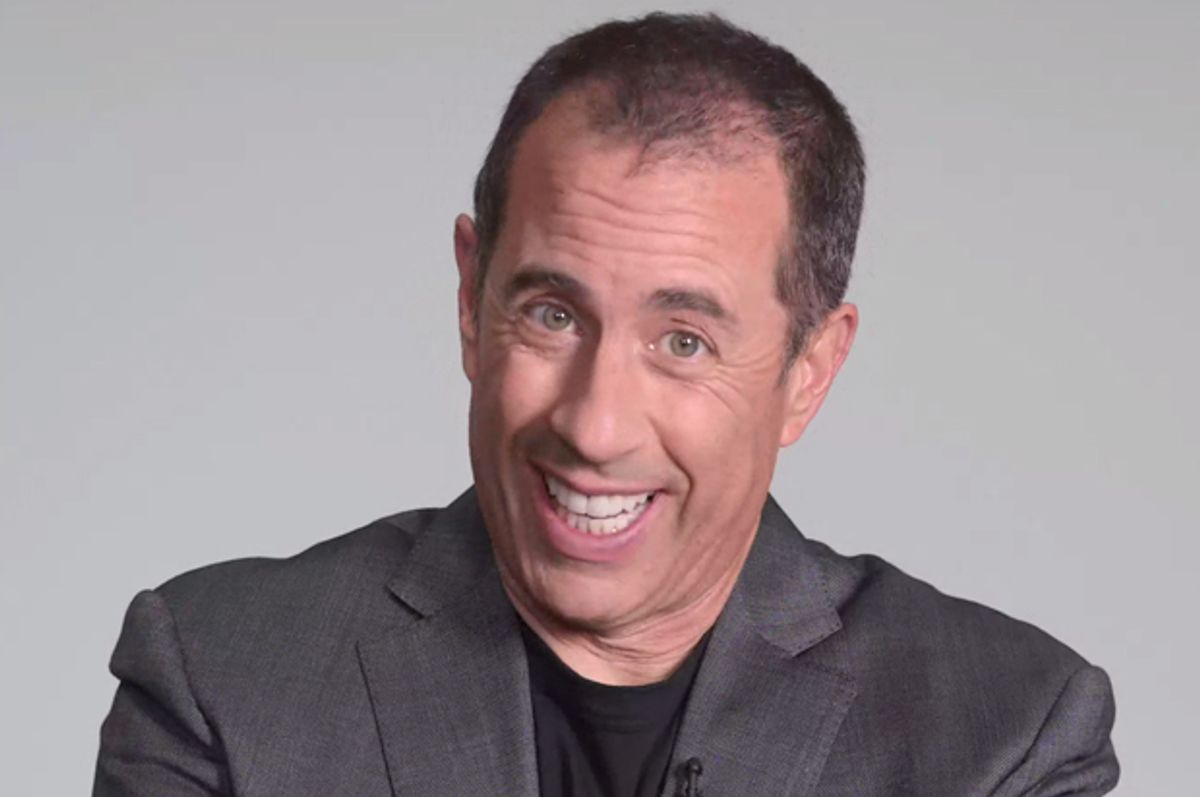 Why is the 25th anniversary of the "Seinfeld" pilot getting so much press?

It's generally acknowledged that the show didn't kick into gear for a fair little bit -- indeed, the first episode of "Seinfeld" in 1989 was followed by a yearlong absence from air after NBC rejected the show. It was eventually picked up for a first season that totaled five episodes, and there's not a classic in the bunch. It's not until mid-Season 2, in 1991, that you get the first episode that feels characteristic of "Seinfeld" with intersecting subplots (that'd be "The Baby Shower"), and even in Season 4, the one with "The Contest" and the one that won the show's only best comedy series Emmy, the show was a middling ratings performer. (That is, for the time.) And yet the anniversary has gotten plenty of coverage across the Internet. And if it seems like just last year we were marking the 15th anniversary of the finale -- well, that's because it was.

Obviously, even the early episodes of "Seinfeld" have risen in esteem since the show debuted. But that's part of the problem with celebrating any "Seinfeld"-related anniversary with special content -- with the show on constant rotation in syndication, having sold huge volumes of DVDs, getting a pretty crummy but famous parody Twitter account, and having effectively defined the patois of the 1990s, every day since the show went off-air has been in some way a celebration of "Seinfeld."

But watching a TV show is one level of commitment, and making an editorial calendar is quite another. The celebration of the show's anniversary on culture websites has brought to the fore the fact that Jerry Seinfeld is so strongly identified with his sitcom that he's pretty much stuck. "Seinfeld" operated at such a high level by the time it found its groove that it'd be difficult even for Seinfeld himself to duplicate; what's more, it appears that he's not really trying, concentrating instead on a Web series ("Comedians in Cars Getting Coffee") after stints producing reality TV ("The Marriage Ref") and writing a movie whose funniest joke was its title ("Bee Movie"). Part of the nostalgia for "Seinfeld" is nostalgia for Seinfeld, the rare star who hasn't tried to duplicate past successes; we can't miss, for instance, his fellow '90s sitcom stars Roseanne Barr or Kelsey Grammer, because they keep on trying. Seinfeld underlined his disdain for those who sought a return of the funnyman they'd loved in the 1990s with both his crotchety "Louie" appearances and with a "reunion" that was nothing more than a Super Bowl ad.

His fellow "Seinfeld" stars have kept at their careers with mixed levels of success: Michael Richards' public profile has dried up for obvious reasons, Jason Alexander seems to be doing fine, and Julia Louis-Dreyfus has found success in two consecutive hit comedies. But it's Seinfeld's own apparent disdain for his legacy that's so strange. It's not that he hasn't been involved in a project at the level of "Seinfeld" in the intervening years -- it's that what he's chosen to devote his time to is so bad, so alternately lazy and disdainful of its own audience. Seinfeld seems like the very last person who'd be interested in a "Seinfeld" anniversary celebration.

Maybe that's why, as unnecessary as it seems, a group pause to observe the anniversary of the "Seinfeld" pilot -- as opposed to the anniversary of the finale or of "The Contest" or anything else -- seems to make sense. That was the moment at which everything lay ahead of "Seinfeld," when it might unfold in any way and when Seinfeld himself was still grateful for the attention and eager to perform.