I accidentally became a housewife

Even feminists can find themselves staying at home full-time with the kids. The crazy part is, I (mostly) love it 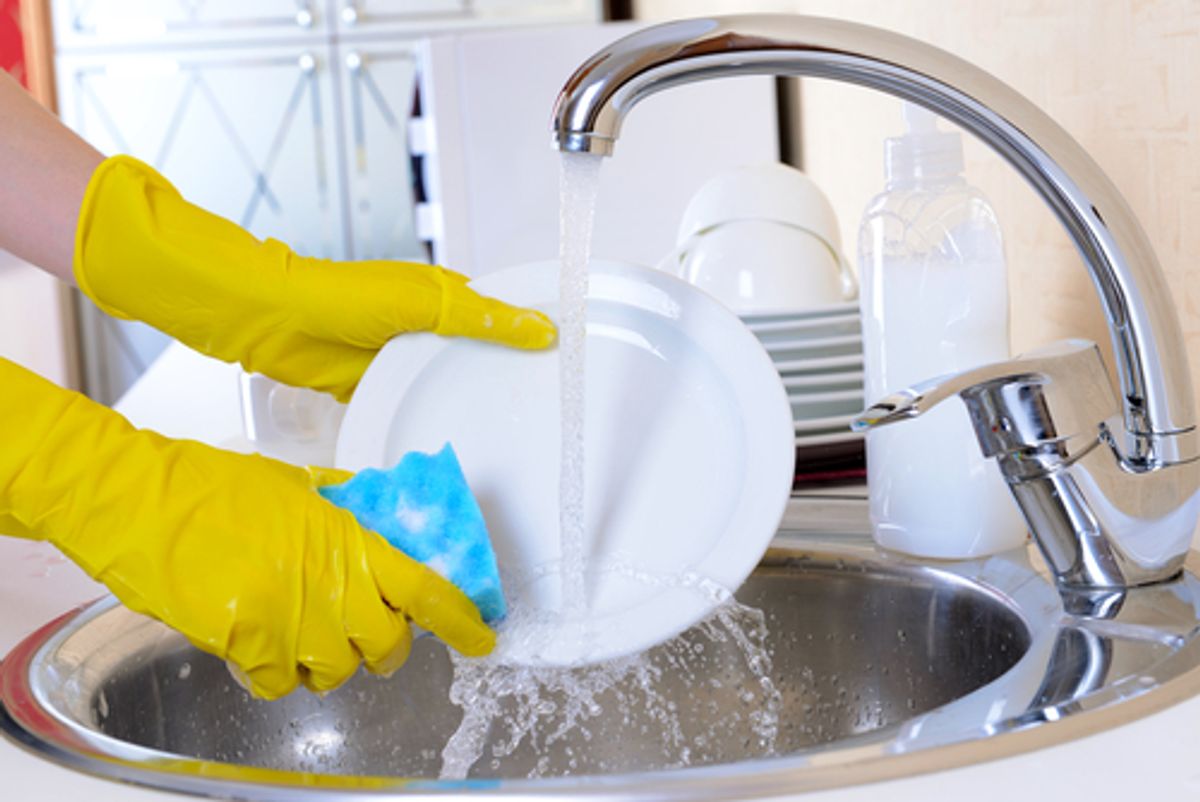 I never thought it would happen to me. After all, I grew up in the heyday of second-wave feminism, raised by parents who encouraged me to think of myself as equally entitled to anything boys got—I even received a Tonka truck for my fourth birthday (though when my father accidentally backed over it in our driveway it was never replaced). My earliest career ambition was to be an archeologist. Later, I decided I would be a doctor. No, a lawyer. No: a doctor AND a lawyer.

Sure, an air of casual sexism still hung around, Free to Be You and Me notwithstanding. I ran into my share of it, as when my Driver’s Ed instructor told me, after I mentioned that I love to travel, that I could grow up to be a stewardess. But I was able to brush it off as the other person’s problem. I knew who I was going to be: a woman with a big, important career. I would always be a feminist. I would have kids and a husband if I wanted them, but I would not be a housewife.

More from DAME: "I Don't Want to Be the Town's Token Black Family"

I had seen what some feminists thought of housewives. One evening I was playing on the porch when my father returned from playing tennis with one of his graduate students, a young woman. I was around five. Dad and his student sat on our porch, trying to catch a breeze in the Kansas heat. They talked about politics, a constant background conversation in my childhood. My mother was inside. I was pushing a leaf toward a grasshopper, trying to make it jump, when she came out onto the porch, carrying a tray bearing gin and tonics and a plate of cheese and crackers.

“Why, Bill! What a perfect little housewife you have!” the female grad student said, her tone undeniably mocking. I don’t remember if Mom said anything in return, but I would guess not. Thinking about it now, I’m angry and embarrassed. I wish my mother had stood up for herself, somehow owned her housewifeness, but she probably knew that her marriage was nearly over, and divorce, after all, is one reliable way to stop being a housewife.

My mother’s own feminism, which she was working to pass along to me, was no defense against the other woman’s judgment. In 1970, housewife was a fighting word—women like my mother would find it an insult, while those in Nixon’s so-called silent majority would wear it like a badge of honor. Conservatives like Phyllis Schlafly proudly called themselves housewives even when they weren’t (Schlafly was a full-time writer and political activist who depended on a full staff for household work when her kids were small, after all, even as she exhorted all women to stay home and care for their families).

Like Schlafly, I write for a living. Unlike her, I’m a little bit ashamed to call myself a housewife. But increasingly I’ve come to realize that I am.

The evidence is all around me: Although I make money with my writing, it’s a tiny fraction of what my husband makes. We mostly live on his income. As for the housewife’s workload, that’s mostly mine. I wash the dishes, clean the toilets, dust, and vacuum. Although he likes to do laundry when he’s home (he really does!), I’m the one who keeps the mental inventory of the kids’ clothes and everyone’s bedding and towels. I know where the missing socks are buried. I make the doctors’ appointments and fill out the school forms. I volunteer for field trips and make cupcakes as needed. Although I have an alcove I call my study (which my son helpfully points out “isn’t as big as daddy’s and doesn’t have a door”), most days I work on my laptop in the kitchen, because I’m invariably also cooking and/or cleaning.

The crazy part is, I (mostly) love it.

More from DAME: "Is 'Superman' the Greatest Adoption Story of All Time?"

I’m still as much a feminist as I was in kindergarten—and with a lot more reasons to be. But even though I worry about the missed income from my prime money-making years, feel angry that my country has such family-unfriendly policies, and am aware that my heterosexual, middle-class privilege makes this unfairly easy for me, I have to say I’m finding unexpected joy in the role.

Perhaps it’s because I’ve had big serious jobs—though I never did reach my youthful dream of being a doctor, lawyer, or doctor/lawyer—and while I loved them, I can’t muster much wistfulness for days spent supervising the work of others, wrestling a budget and schedule into submission, and attending endless meetings. Even when my work was at its most fulfilling, I can’t imagine merging it with my home life as it currently stands—two kids, a husband who travels—without making serious sacrifices in both realms. Friends of mine who work full-time with kids are my heroines, and they are also so stressed out that every time I see them I want to offer them a cupcake and a glass of wine.

This isn’t to dredge up the tired old battles between stay-at-home moms and working moms (though as a feminist housewife I’m obligated to pipe up, “all moms are working moms”). Nor would I ever say it’s not possible to do both. After all, many women have no choice but to work full-time and care for their kids, and others wouldn’t leave their jobs even if they could. If I were a doctor or lawyer I probably would have fought like hell to keep the big job even through parenthood, but when my son was born I was burned out from managing big, contentious projects. My workaholic tendencies were beginning to bother even me, and when my husband suggested we could try living on his income alone, I hung up my Ann Taylor separates for good. Or, at least for now.

My mother probably has something to do with this as well.

After those trays of gin and tonics and her maligned attempts at perfect housewifedom, my mother was forced back into the working world, more or less miserably, by my parents’ divorce. It was 1972 and the country was riding a massive wave of divorce (the divorce rate jumped by 40 percent between 1970 and 1975). So she wasn’t alone in what must have been a sickening realization: that her life plan—marrying an educated man, raising his intelligent, well-rounded children, creating and keeping an elegant, cultured home—had been erased and rewritten to include the kids and responsibility, but no husband and not enough money to keep things afloat.

So mom went to work for the first time since she was a childless newlywed. Like many working mothers, she was overwhelmed. Worse, she suffered severe depression that left her increasingly unable to attend to us, her kids. She showed up at work, she paid the mortgage, but she stopped cooking for us or washing our clothes or cleaning the house.

More from DAME: "I'm Sorry I Apologize So Much"

When I had my own kids I started to realize how much it had affected me, growing up in a house without a housewife. The work of making a family feel safe and happy (just ordinary happy, not Hollywood happy) is often invisible, but it is work. Someone has to be there to make the sandwiches, fold the towels, buy the ponytail holders and braid the hair. Unlike my mother, I was able to make a choice—obviously choice is the key thing here—to be there for them when they are young. My kids will never be as self-sufficient as I was when I was their age and I’m glad of it.

Lately the word “housewife” feels more like a TV marketing gimmick than anything else. Judging by the Real Housewives franchise, it seems to mean mostly that a woman has a lot of money without having to work for it (also, that she’s fond of throwing wine at other women). But the real housewives I know are all more like me: smart feminists who’ve found themselves working primarily or in large part at caring for their families. Most of us have other work that we fit around our housewife jobs, and most of us assume we’ll increase our workload as our children demand less of our time, but we know that we can’t assume anything. We are often ambivalent about finding ourselves in this position. The work itself can be isolating and demeaning, and our wardrobes aren’t what they once were. But for me at least, this time as a housewife has brought enormous rewards, even as it’s wreaked havoc on my 401K.

The choice to housewife (I’m going to declare it a verb) carries risks, both financial and psychic. That’s why we accidental housewives need to own it—that the work we do is valuable, difficult, and irreplaceable. My intelligence and creativity are not diminished (in fact, they’re enhanced) by working in this sphere, and if anyone ever mocks me for offering them a gin and tonic, well, I’ll just smile and spit in the next one.