The case for banning fireworks

They're a threat to the environment and dangerous as hell. There's got to be a better way to celebrate 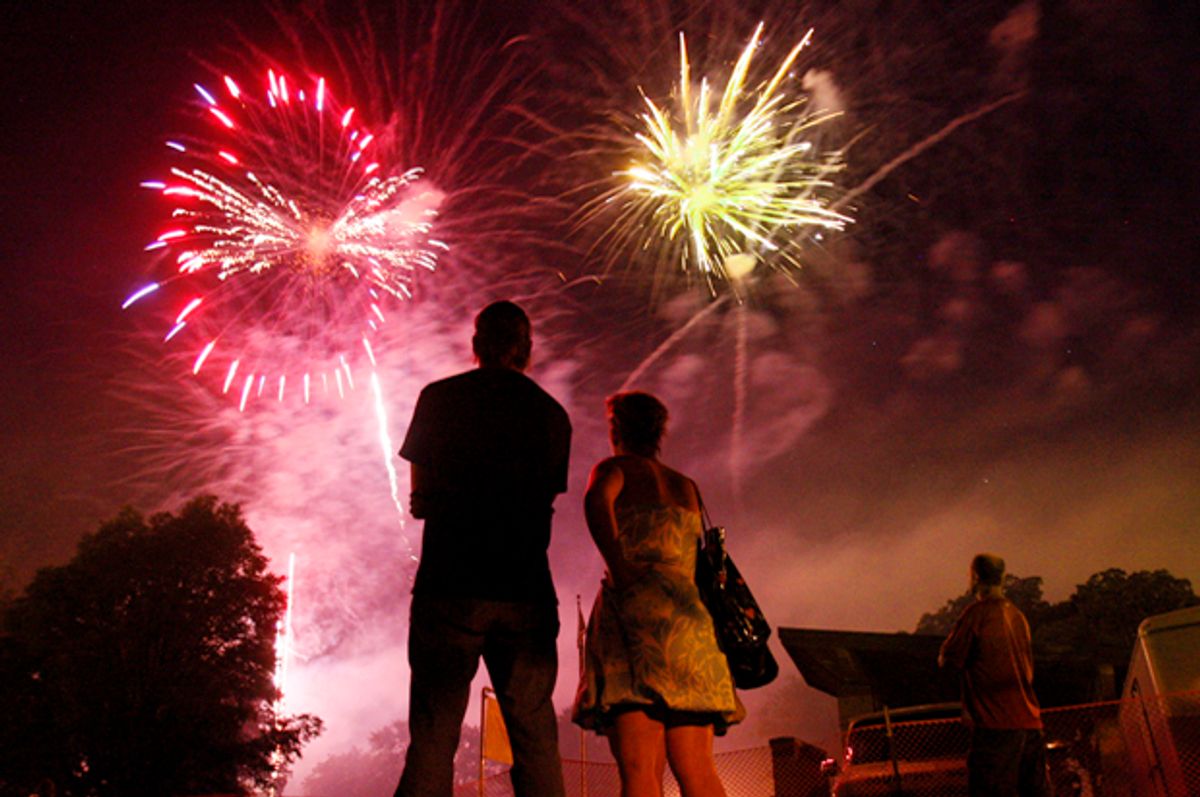 The latest EPA conspiracy theory comes to us via Senate Republicans, 10 of whom signed a letter to the agency expressing their concern that new regulations could put a stop to patriotic festivities. "If finalized," the letter warns, "EPA and the Army Corps of Engineers’ proposal to expand the Clean Water Act’s definition of the 'waters of the United States' may enable litigious environmental groups to jeopardize fireworks displays throughout the country."

Look, I'm an environmental reporter, and as such it is practically in my job description to be a killjoy. For this I am sorry. It's not like I won't personally be enjoying the fireworks over the East River -- which at least can’t get any more polluted than it already is -- but I won't be able to do so without nagging self-admonishments about how fireworks are actually kind of stupid.

Now, as is my professional duty, I pass these nagging thoughts on to you:

Discharged from fireworks after they explode overhead are carbon monoxide, sulfur dioxide, nitrogen oxide and particulate matter -- all those things that we characterize as "air pollution" and generally try to avoid breathing in. One recent study in China measured significantly high concentrations of PM2.5 -- the particulate matter most dangerous to human health -- linked to the fireworks-heavy New Year's celebrations. "We have found that air quality is seriously affected by this human activity and the effects are much greater than we previously thought," commented Wei Gong, the study's lead author.

"It is time to alert the public to the negative effects of our cultural customs," he added

In China, of course, air quality is always a pressing issue, so adding any extra pollutants to the mix seems like a bad idea. This year, the China Meteorological Administration urged local governments to ban fireworks shows for the sake of public health. In the U.S., some counties are issuing health advisories for "sensitive groups," such as people with asthma or heart disease, due to the high levels of smoke.

And that heavy smoke has the potential to cause more immediate consequences. In the U.K. last year, seven people died and 51 others were injured in a major pile-up blamed on dense firework smoke from a nearby rugby club. Manslaughter charges against the guy who set them off were ultimately dropped, but not until after a long, drawn-out trial that probably left him wishing he'd stuck to a different form of celebration.

They pollute the ground, too

After fireworks do their thing, their spent carcasses return to earth, where they remain until someone gets around to picking them up. The litter problem can get bad enough that some communities have considered banning fireworks to spare the tax dollars (or the "16 hours of clean-up imposed on local non-profit groups") needed to deal with it.

So here's the thing about fireworks: They get their brilliant colors via heavy metals like barium (green) and strontium (red). At least one study found that, thanks to those contaminants, it's really not a good idea to get so close to the smoke that you're inhaling it. They also contain perchlorate, a naturally occurring and man-made chemical (it's found in some bleach and fertilizer) that can act as a hormone disruptor if ingested -- the EPA recently decided to regulate it under the Safe Water Drinking Act.

There's scant research on the fallout, but some studies have been able to link fireworks shows to increased concentrations of perchlorate and heavy metals on the surface of nearby water or, in the case of the latter study, snow. The question of whether that's doing enough to affect water quality or otherwise harm the environment is still up for debate: Andrew Jackson, a perchlorate expert at Texas Tech, pointed out to Salon that the health effects of perchlorate are chronic, not acute, "so it would take long-term exposure for it to really be a problem" -- in other words, more than can be accomplished during a one-night celebration. Neal Langerman, with the American Chemical Society's Division of Chemical Health & Safety, said the same about heavy metals: He doesn't get too upset about the occasional show, he told Salon, because "in the grand scheme of everything that gets washed down the storm drain, it just does not matter."

Where theme parks and other venues hold nightly spectacles, though, those minor pollutants and irritants can add up, as anyone who lives near SeaWorld or Disneyland will tell you. Meanwhile, "more research is needed" is never a reassuring phrase for those worried about environmental toxicants. There have been attempts to develop "eco-friendly" alternatives to traditional fireworks, but Langerman doesn't think they're going to take off (pun always intended). "Realistically, the metals are such proven substances, and they're pretty darn inexpensive, that I don't see that the 'greener' fireworks are likely to catch on," he said.

The giant bang accompanying fireworks measures in the 150 to 175 decibel range, according to audiologist Nathan Williams -- loud enough to cause hearing damage in people, especially children, who get too close. Purdue University's Jennifer Simpson agrees: "One large acoustic event – when it is very loud at one time – can cause hearing loss," she warns.

They cause animals to freak out

The Internet is rife with suggestions for how to keep your pet from losing its mind on July 4, and PetMeds has a whole bevy of "noise anxiety" treatments for your jumpy dog. Anxious animals are bad; animals compelled by their anxiety to run away from home and take over the streets are worse. According to the American Humane Society, July 5 is the busiest day of the year for animal shelters, which are stuck working to reunite the whimpering remains of people's pets with their panicked owners. Not fun. Not fun at all.

In 2010, 5,000 red-winged blackbirds died after illegal New Years' fireworks were set off in Arizona. "The birds, startled from their roosts and disoriented in the darkness, collided with buildings, cars, and trees." Fourth of July is generally safer, according to Audubon Magazine, because birds don't generally roost so clumped together. Seabirds are another issue: A study from the California Coastal Commission found that the fireworks show in the town of Gualala caused birds to abandon their nests, leaving their vulnerable eggs behind.

They're a major fire risk

Langerman, who's "not a zero-tolerance person" draws the line here. "It's stupid as hell" to set off fireworks if you're living in a wildfire-prone area, he said.

The Western U.S. is undergoing drought and at a heightened risk for wildfires. The California Department of Forestry and Fire Protection has already responded to 2,500 wildfires this year. Scan the local news in California and Texas, and fire officials are already beginning to freak out about illegal fireworks. Some drought-stricken communities are banning them altogether -- and California is cracking down on rule-breakers -- but fewer appear to be canceling public shows over the risk.

Public shows get canceled all the time due to rain, so doesn't seem like it should be too far of a stretch to cancel them for dry weather. Dale Seward, president of the Delphi, Indiana, Chamber of Commerce, which canceled the show in 2012 because of drought, put it like this: “The way I look at it, I’d rather preside over the chamber that canceled the fireworks one year than preside over the chamber that burned the school down."

The Consumer Product Safety Commission just released its annual tally of everything that went wrong in 2013. In the U.S., it found, fireworks were associated with eight deaths and about 11,400 injuries -- 65 percent of which were associated with the 30-day period surrounding Independence Day.

People plus explosives (plus beer) is rarely a good idea, as illustrated by this helpful video from the National Fire Protection Association:

Most of this can be avoided by leaving the pyrotechnics to the professionals, but major accidents have been known to happen at public shows, too. Just remember, it's only fun until someone blows him or herself up.