Despite the army’s denials, workers speak of harassment and arbitrary raids 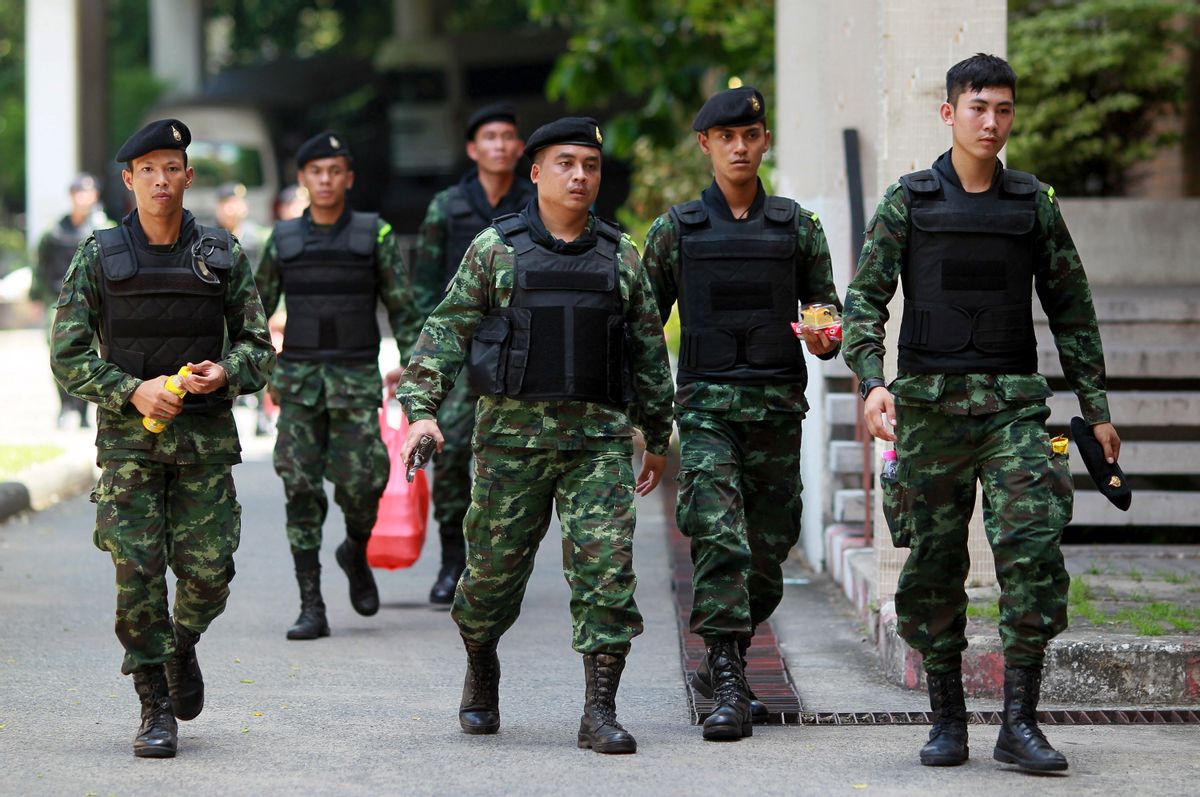 In the early hours of June 11, the residents of his neighborhood here in this northern Thai city were abruptly awoken by a police officer’s stern voice.

“They told us by the loudspeaker that they were going to all the homes and we have to stand outside with our papers,” said the 24-year-old migrant worker from Myanmar, the country formerly known as Burma.

As the sun rose over the predominantly Burmese neighborhood of Aon Ar Ree, more than 100 Thai police went house-to-house, taking away Burmese migrants whom they said did not have proper documentation.

They were ordered to squat in line on the streets while the police canvassed the entire neighborhood — a process that went on until around noon.

“After they detained 49 people from here, they took them away. Around 6:00 or 7:00 p.m., all the people came back because they actually had passports and work permits,” said Naw, who left Myanmar's Shan State two months ago to work at a Thai guesthouse. “The police had no good reasons for detaining them.”

Just four hours from the Thai-Burmese border, Chiang Mai is a major destination for thousands of Burmese nationals who are in search of a better life.

It is home to more than 73,000 registered workers from Myanmar — many of them from the northeastern Shan State. Thousands more work temporary jobs. They toil at difficult or unpleasant jobs that Thais typically do not want, like cleaning or construction. Many have been living in Thailand for decades, escaping ethnic conflict or lower wages back home.

However, in late May, after months of political turmoil, Thailand’s army declared a coup. While the target was Prime Minister Yingluck Shinawatra’s administration, the military immediately began cracking down on many of the country’s 3 to 4 million migrant workers, most of whom are Burmese. Authorities began conducting raids in Mae Sot, a Thai border town that serves as a checkpoint for Burmese migrants. Within the first week, about 300 were deported after being detained by the Thai authorities, according to local media reports.

And, as Naw’s experience shows, others have been rounded up or harassed.

The Thai army, however, rejects those claims. Its representatives have repeatedly denied that they have any policy to crack down on migrant workers.

“We do not have any cases of deporting Burmese workers from Thailand,” said Colonel Werachon Sukondhadpatipak, a spokesman for the Thai army. “We just have a policy that is clear that those who are undocumented, we will provide them with a channel of being legalized.”

Nevertheless, reports of random raids on Burmese neighborhoods, businesses and organizations in Thailand have cemented an environment of fear among the migrant worker community in Chiang Mai.

“This is all a symptom of martial law and the Burmese, the Shan, the Karen and the Karenni are all going to feel it because they are perceived by the military as perhaps subversive because of their race,” Chambers said.

“This all goes back to the military mindset, which is that we have to guard the ‘we-ness’ of the Thai frontier, and keep the ‘other-ness’ of the enemy — Burmese, Shan — at bay. And that would come before thoughts of economic repercussions,” he continued.

Naw’s neighborhood — typically bustling during the day — is now quiet. “It is very unfair because we have ID cards and passports and work permits,” Naw said. “Many people are very scared.”

For Toe Toe, secretary general for Chiang Mai-based NGO Burmese Women’s Union, the raid on her organization on June 19 was not the first. She was terrified because in 2009, the police forced everyone at her center to spend a night in a jail cell.

“It was a horrible experience for our participants,” Toe Toe said. “We already have trauma from living through civil war and from living in the refugee camps, and now they have the trauma of sleeping in a cell for one night.”

This time, they were lucky. The raid occurred in the middle of a workshop for about 11 women who were learning about Burmese politics, and a Thai national was present so she brought the police outside to speak with them.

While Toe Toe understood the necessity of trying to regulate undocumented workers, she deplored the tactics the Thai security forces have employed.

“[The authorities] should not act like this because they know that most migrant workers try to follow regulations,” she said. “They should be finding another way to check for illegal migrant workers apart from coming with a group of police and going into the community where migrant workers live and coming to arrest them like they are criminals.”

Despite all these problems, none of the Burmese migrants interviewed reported wanting to return home to Burma, a reaction very different from Cambodian migrant workers in Thailand.

Since the coup, roughly 250,000 migrants have returned to Cambodia, fearing violence. In response, the Cambodian government has organized military trucks to take the workers home and provided them with food and emergency medical care.

Yuk, 34, who works as a handy man in a hotel, said that the Burmese migrants don’t have any options except to stay put and wait for the situation in Thailand to calm down.

“Even if it is stricter here now, if we go home, there will be no help from the government. They will not provide us with shelter or transportation like the Cambodian government did to their people,” Yuk said. “It is better to stay here even if things are getting tougher.”