The perils of flying while brown

As a member of a multi-skin-toned family, I've come to regard the TSA with a mixture of fear and loathing 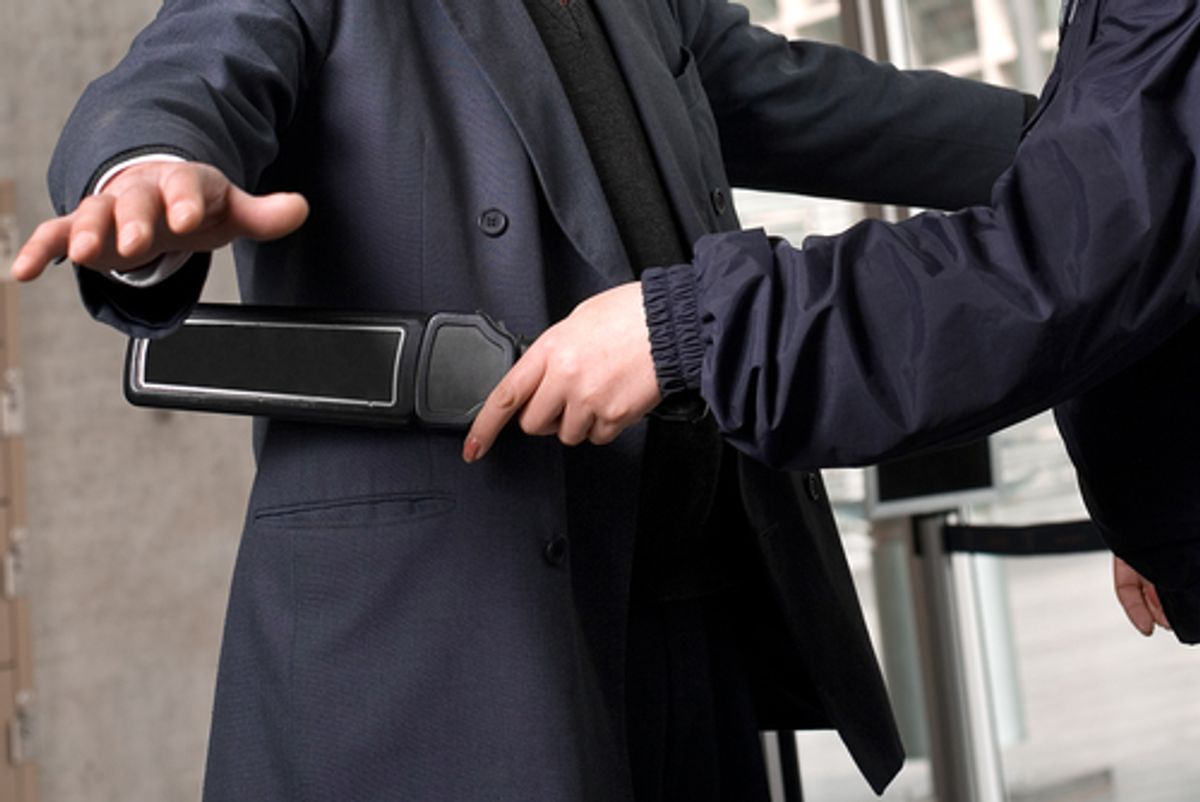 MY NINE YEAR-OLD daughter has developed a fear of the TSA. She doesn’t say it in so many words but I know.

“I’m glad we’re going on our trip, Mama.” She pauses, chewing her lip. “But I wish… I wish we didn’t have to go through security.”

“Me too,” I agree, remembering a time when she was barely out of diapers, and a TSA officer tried to wrench her, screaming, from my arms, and make her walk alone through the metal detector.

She has a faraway look, as if she’s remembering all the times that she has been yelled at in security, many more times than her fairer skinned older brother. Or perhaps she is remembering how often I, her dark-skinned mother, am ‘randomly’ stopped to have my hands coated with bomb-detection liquid. Random or not, this has never happened to her European father.

But nine year olds are optimists, or at least this one is, so she soon brightens up. “Wouldn’t it be awesome if we could just travel by floo network?”

Harry Potter-based travel possibilities – even ones involving fireplaces and chimneys – would be fantastic indeed. As far as I’m aware, there is no TSA at Hogwarts.

“Only think of all the soot,” I say. My heart unclenches a little at her smile. “What if instead we travelled by port-key?”

And she is off – imagining if it will be a “manky old boot” or a tri-wizard tournament cup that magically transports us, TSA-free, to our destination. But as we near the airport, my anxiety is rising. Mothers are supposed to protect their children, after all, we are supposed to make their world a safe and trustworthy place.

Kind of like what the TSA thinks it is doing, I guess.

But the TSA is not our parent, it is a government institution founded on fear, and deeply imperfect systems of screening. We, who speak languages other than English, instinctively keep our voices down in airports, lest we be suspected of plotting terror when we are actually just wondering about the location of the closest Starbucks. Consider that airports now have ‘behavior detection’ officers whose job it is to ‘deter’ terrorist activities by targeting, according to an August 2012 New York Times article, “Not only Middle Easterners… but Hispanics traveling to Miami… or blacks wearing baseball caps backward.”

There is something particularly heinous about a ‘system of protection’ that so blatantly racially profiles. In the case of our multi-skin-toned family, this racial profiling is so obvious as to seem like a joke, splitting us down the middle, right along color lines.

When I travel alone, I know it will happen. It has gotten so bad I sometimes think twice before wearing any Indian clothes – which is unusual for me, since I’m usually wearing some item of Indian clothing. But without doing any actual statistical analysis, I know that I get pulled aside more often – and for more thorough searching – when I’m dressed ‘ethnically’. Because, I guess, terrorists like to wear batik scarves and colorful cotton kurtas? (Or rather, that ‘difference’ and ‘terrorism’ have become conflated in this country?)

But, it’s far more painful when I’m traveling with my family because the colorism of the profiling is so ridiculously obvious.

We are frequent air travelers – my husband, children, and I. We are a global family with relatives all over the world. A love of travel is in fact one of the first things that drew my husband and I, both children of immigrants, together. But back in those days, a plane trip was not so different from a flying bus. There were no liquids to throw away before security, no shoes and jackets to take off while trying to keep a baby or toddler from crying.

But then came 9-11, a day when brown-skinned Americans like me, people of South Asian and Middle Eastern origin (not to mention anyone else who could belong to the all-encompassing category of ‘potential terrorist’) came to know what our African American brothers and sisters said was the experience of ‘Driving while Black.’ (or, as in the case of Trayvon Martin, Walking While Black). Random screenings and checks stop feeling so random when they happen each and every time one goes to the airport. That became the reality of ‘Flying while Brown.’

“I’m glad they do it,” says a fair-skinned, blonde-haired haired friend of mine, as I try to tamp down my ire, “They need to keep us safe. Heck, I’d undress down to my underwear if they wanted me to.”

(Not that she would have to, if she went through the old ‘virtual strip search’ back-scatter X-ray machines which would do the undressing for you. But we apparently no longer have that kind of scanner, or so they say, in airports)

But naked X-ray image or not, the thing is, the TSA probably would never target my friend in the way that they target brown folks. Unless she was wearing a turban orheadscarf. Or sporting a hairdo deemed ‘un-see-through-able’ by the airport scanners (like African American women who have been increasingly subject to ‘natural hair patdowns.’) Or maybe if she refused the body-scanner because she was pregnant. And if it were to happen, I think she might feel differently, like she was a target, a pariah; like she was less of a human being.

The likelihood is that the TSA would not select her for any sort of ‘random’ or extra screening. And certainly, they would not make her beautiful daughter afraid to go to the airport, afraid and unable to exactly articulate why they pick on her so much more than her sibling; why they harass one of her parents and not the other.

That is the nature of racial profiling and other racial micro- (and not so micro-) aggressions. Unlike, say, an out and out racial slur spit into the face, such modes of racism sometimes rob you of the ability to understand where they are coming from; but that doesn’t take away their power.

Inevitably, as the one who carries the passports and boarding passes, I am in front of my husband and children as we pass through the security line. One trip, a TSA agent asks me to step out of line for yet another ‘random’ screening.

“Ma’am, this way,” he says, like a police officer escorting away a suspected murderer.

My daughter, smaller then, senses the danger in his voice, and almost begins to cry. “Mama! Where are they taking you?”

My son, strengthened by some ancient instinct to protect his mother, grabs my hand. His pale fingers interlace my dark brown. His trembling grip tells me he will never willingly let me go.

“I have my children with me,” I explain, at the brink of tears myself.

It is only then the agents realize I’m not alone. But the kicker is the blatancy of it all, as if they are matching our skin tones to a racist color wheel in which all the shades of brown are labeled ‘terrorist,’ and anything paler labeled ‘A-Ok.’

“Oh, look, that’s her husband,” another TSA agent says, loud enough for me to hear, pointing at my white spouse.

And they let me go.

I could list all sorts of other incidents of ‘flying while brown’ – like hip hop artist Joe Budden instagramming an image of a turbaned Sikh gentleman at the airport along with the comment “Not on my watch, homeboy!” Or like a “half-Jewish half-Arab” woman from Ohio being detained, along with her two Indian seat-mates, on the assumption that three brown folks sitting together must be up to no good. Or like a Muslim American being ‘randomly’ searched (again and again) because his name isn’t John Smith, but Azeem Khan.

But there are far too many to list. Ask any brown person who has flown in the U.S., and they will have a tale to tell you. Mine happens to be about a family with members of all sorts of different skin shades, being treated differently according to color.

No surprise, this last trip, it happens again. As we wait in the interminable, snaking security line, my daughter has a feverish look about her. She is talking in a high and animated voice about banal subjects (an upcoming music concert at school, a Disney film she wants to see), as if advertising our innocence. Even though we’re a multilingual family and she’s speaking (loudly) in English, I don’t correct her. I don’t know how to reassure her, and it makes me feel helpless.

Of course, it doesn’t help that I get pulled out of line to get my hands bomb-checked. (My husband, yet again, misses out on the joys of this ‘random’ screening.)

But by the time we have put all our belongings in the grey plastic buckets, laid bare our baggy full of toothpaste and hand sanitizer, taken out our laptops and off our jackets, she seems to have relaxed a little. We are almost home free.

When we get to the metal detector, my son walks through first, no problem. My daughter, who – except for her several-shades-darker skin tone – looks so much like her brother they are often mistaken for twins, follows with a certain bounce in her step. Maybe she is thinking of Harry Potter and the floo network. Maybe she is imagining she too has magical powers.

“Go back! You can’t skip!” barks the unsmiling TSA agent. “WALK! You have to w-a-l-k!” I have an overwhelming urge to slap the sour-faced woman.

Instead, I watch my dear girl’s shoulders slump. The magic gone, she turns around, feet dragging, and goes slowly through the gate once again.