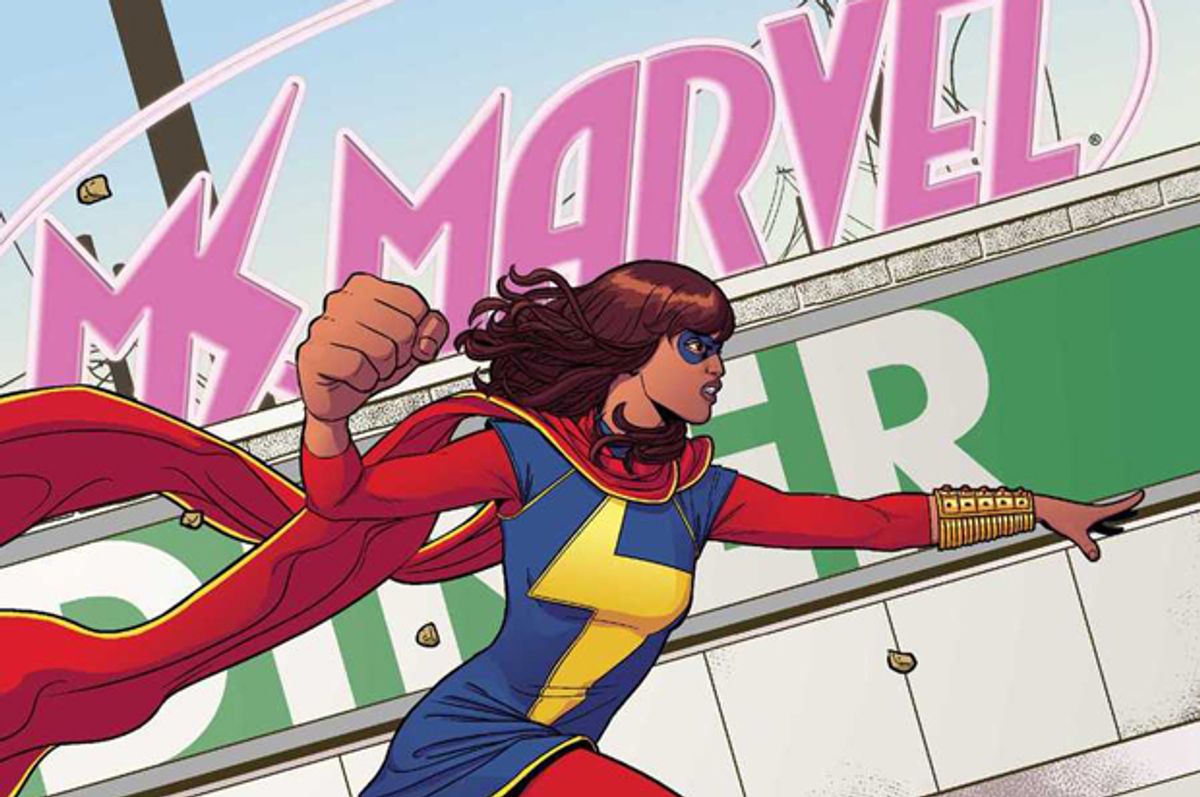 Comic books have traditionally been the most testosterone-marinated of genres. As comics have taken over TV and the movies, that status quo hasn’t changed much. Preposterously, we’re still waiting for a Wonder Woman movie. Marvel women are making some gains on the small screen, with upcoming TV shows lined up for “Jessica Jones” (a private eye/former superhero created by Brian Michael Bendis and Michael Gaydos) and “Agent Carter” (Captain America’s '40s love interest).  But overall, the boys are still dominating.

Yet change is finally coming from an unexpected source: comic books themselves. This year, there has been a striking attempt by publishers (particularly Image and Marvel) to launch new series with female leads. To celebrate this welcome development, here are nine of the best new female-centric series.

Jennifer Walters aka She-Hulk is a superhero and a lawyer, and this new series by Charles Soule (also a lawyer) and Javier Pulido (not a lawyer, but a pop-art-influenced phenom) takes this giant green lady through the trials of establishing her own practice, punching the bad guys in the head, and seeking asylum for the bratty child of Dr. Doom. In the same spirit as “Hawkeye” and “The Superior Foes of Spider-Man,” “She-Hulk”is part of a Marvel movement toward independent-flavored versions of corporate creations that don't shy away from comedy.

The Rat Queens are an all-female gang who have foul mouths, sharp swords and hilarious adventures. The four leads — Hannah, Violet, Dee, and Betty — feel like real-life friends who bicker, joke, do drugs, have sex, eat candy, drink too much and get into trouble. Only these friends settle their problems with badass swordplay and magic. Roc Upchurch’s cartoony yet detailed art is like a fairy tale directed by Tarantino. Kurtis J. Wiebe’s dialogue is quick and funny: This series has enough humor to work as a quality sitcom, which it might end up being, since it’s going to be an animated pilot. This Image comic is a strong challenger to “Saga” as the best comic out there.

Published by BOOM! Studios, here’s another series about a group of female friends, this time of a younger variety: the Lumberjanes are girls at a scout camp where the challenges go far beyond arts and crafts or making s'mores: At this camp, there are three-eyed wolves, cryptic messages, and mysterious bearwomen. This supernatural mystery story is written with a ton of lively humor by Noelle Stevenson and Grace Ellis, and Brooke Allen’s art is like a children’s book for adults.

Thanks to Scarlett Johansson’s appearances in “Iron Man 2,” “The Avengers” and the frankly spectacular “Captain America: The Winter Soldier,” Natasha Romanoff has never been more prominent in pop culture. In this series, Phil Noto’s beautiful, painted art has a classical elegance that’s matched by Nathan Edmondson’s stories and dialogue, which bring out the inherent conflict in Romanoff, who’s always been a morally flexible, female ex-KGB agent in a mostly male, self-righteous superhero world. Hopefully this series’ success and the Widow’s strong presence in “Winter Soldier” are foreshadowing a Black Widow solo film.

Speaking of spies, Ed Brubaker and Steve Epting — who created the comic book version of “The Winter Soldier” — have launched another gem for Image. "Velvet," starring Velvet Templeton, puts a new spin on spy stories by taking an overlooked, underdeveloped character type and making her the star. Velvet is introduced as a secretary at a super-duper-secret spy agency, à la Ms. Moneypenny. Unbeknownst to all, Ms. Templeton is more interesting and deadly than anyone else at the agency. It’s a fresh story by a confident creative team that excels at the spy genre. For another great series with a female protagonist, check out Brubaker’s “Fatale”: an insanely addictive horror noir.

Forget the Jennifer Garner “Elektra” movie — and the Ben Affleck “Daredevil” movie while you’re at it. Elektra has been one of Daredevil’s best supporting characters since she was created by Frank Miller (“The Dark Knight Returns,” “Sin City,” “300”) as an ex-girlfriend and freelance ninja assassin (and you thought your ex was a handful). Though Elektra has occasionally gotten her own series — notably, the immortal “Elektra Assassin” by Miller and Bill Sienkiewicz — she’s mostly remained a supporting character, so it’s welcome to see her take the spotlight, especially in a series that is so visually striking. Writer Haden Blackman comes fresh from a stint on DC’s “Batwoman” with J.H. Williams, and in some ways Elektra is following that series’ artsy path, as Mike Del Mundo’s painted panels kaleidoscope into each other, creating a dreamlike feast for the eyes.

Though her alliterative name may recall the characters of Stan Lee and girlfriends of Superman, Kamala Khan is a modern hero as Ms. Marvel: the first Muslim superhero to headline a comic book. Written by G. Willow Wilson and drawn by Adrian Alphona, this series fits the timeless pattern of teen heroes like Peter Parker and Buffy Summers. Kamala is a Pakistani American from Jersey, and the series is much more about being a Muslim in America than the umpteenth person with powers in the Marvel Universe. This is probably the most important series to debut in years, but it’s also a damn fun comic, much like "Captain Marvel": another recently begun Marvel series featuring the space-facing adventures of Carol Danvers.

I was a bit skeptical that Harley Quinn — a Batman villain and the Joker’s sorta girlfriend — could hold down her own series, but I was flat-out wrong about that. This new series, written by Amanda Conner and Jimmy Palmiotti, and illustrated by Chard Hardin, has a quality seldom seen in the stodgy, grim pages of DC Comics: fun. The latest issue features Harley and another female Batman villain who isn’t entirely evil (Poison Ivy) hanging out at the beach, manipulating lunkhead beach bums, solving a mystery, and fighting assassins with a heckuva lot of wit and humor, much of it dark. There’s something oddly charming about Harley and Ivy tossing an assassin out a window, betting on which side of the fence the impaled body will fall, squealing when the body is “Totally ginsued,” and then eating Chinese food. This series shows there’s more to Harley than her obsession with the Joker: She can hold her own as a batty, humorous, compelling character.

9) “The Wicked and the Divine”

The first issue of this brand spanking new series by Kieron Gillen (writer) and Jamie McKelvie (artist) instantly creates a mythic yet contemporary world. The idea is that there are a series of gods or godlike beings — including Lucifer (in the female form of Luci), Sakhmet (the Egyptian goddess of war) and Amaterau (Japanese goddess of the sun) — who reincarnate on Earth for two years and then disappear. The series shows flashbacks to previous times this has occurred, but focuses on the present, when the gods (mostly goddesses) are using their two years to be rock stars. It’s an intriguing setup that looks like it will have a lot to say about celebrity, celebrity worship, worship in general, and death.

Soon, these series (and many I haven’t covered, such as "Lazurus," "Apocalypse Al," "Red Sonja," "Bandette" and"Vampirella") will have company. In September alone, Image will be launching three new series with female leads. Marvel has a series for Storm planned. Archie — who has found great success with the already-classic horror of "Afterlife With Archie" — is taking a similar approach with Sabrina the teenage witch.

Support these comics! If you don’t, we might end up with the 57th monthly Batman or Spider-Man comic. As great as those dudes are, it’s way past time for female characters — and, of course, creators — to get equal playing time in the tiny but hugely influential realm of comics. After all, women need to smash, clobber and flame on too.