Autism blame game: The dangerous rush to blame everything from vaccines to dairy

Scientists are still struggling to identify what causes the disorder, but that hasn't stopped risky speculation 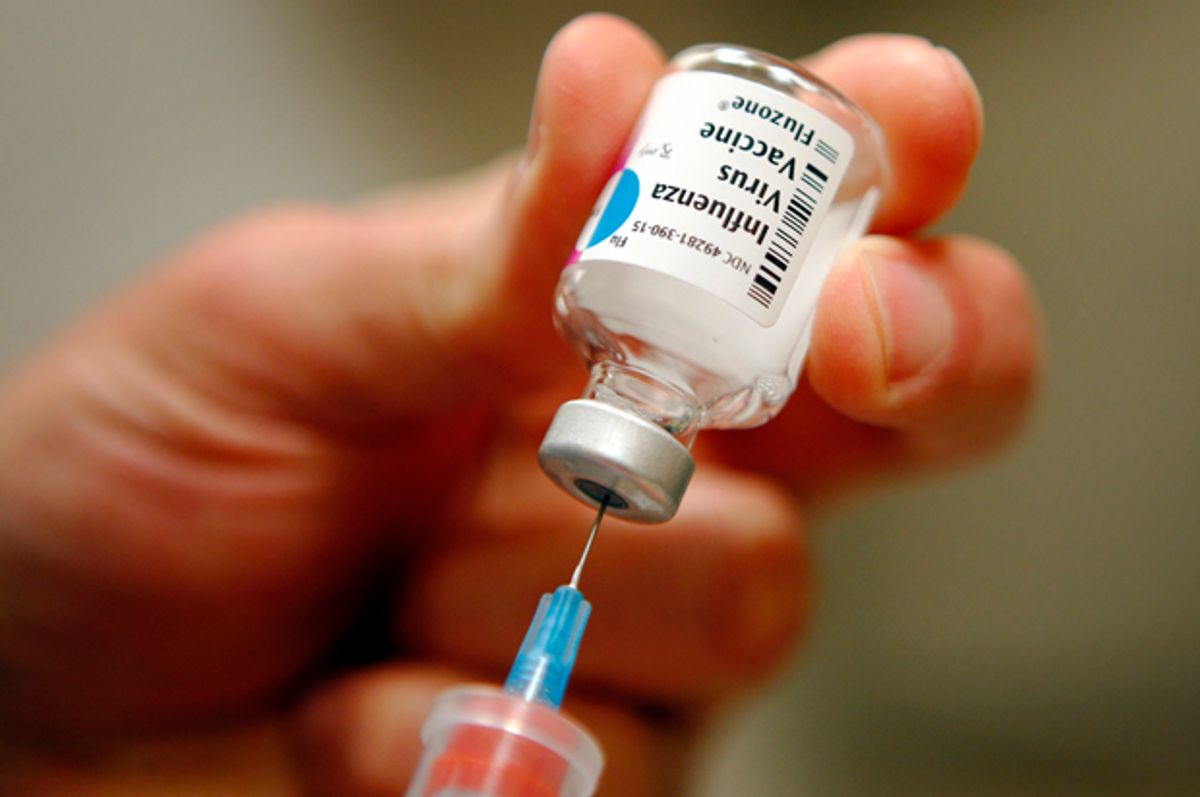 A new study put out by the University of California, Davis, found that there could be a link between certain pesticides in the air and the development of autism. This is at least the third study in recent years to explore such a possible link: A 2007 study looked at residents of Central Valley, California, and found some correlation, but could not prove causation and called for further study. And another study that same year focused on pesticides and developmental disorders.

The most recent study looked at the use of three classes of pesticides: organophosphates, which include the widely used insecticide chlorpyrifos; as well as pyretheroids and carbamates. The participants in the study were 970 pregnant women who lived within one mile of an area treated with one of the three types of chemicals.

The finding is causing something of an uproar over the use of pesticides on farms and around homes -- and, to an extent, rightfully so. If the data is there to support the claim, shouldn’t everyone be worried about the use of these chemicals?

Well, not so fast. The authors say further research is needed to determine whether a mother’s genes may also contribute to the increased risk associated with environmental exposure to pesticides. “It can be very scary for parents when they hear such high degree of association, but they should also keep in mind that this research is only showing some association and not cause,” William Sharp, director of the Marcus Autism Center and assistant professor at Emory University School of Medicine, wrote in an email to CNN. Sharp, who was not involved in either study, simply warns that these studies are finding possible correlations, but they do not necessarily show the direct cause. Until more research is done, the outrage is premature.

So what is causing autism in these children? The real answer is: We just don’t know. Not yet, at least. "There is no known single cause for autism," explains the Autism Society's website. And while scientists around the world are working to find a link, each time a new finding suggests possible contributing factors, what tends to proceed is an immoderate response that forgets that age-old dictum: Correlation does not equal causation. And that's important, because in the past we have been wrong about autism, and sometimes with deadly consequences.

In 1998, Dr. Andrew Wakefield, a British surgeon and medical researcher, published a paper that directly linked autism to the measles, mumps and rubella vaccine. So began the modern anti-vaccination movement.

Wakefield’s study was later discovered to be fraudulent. Because of it, he lost his medical license, but the damage had already been done. Celebrities such as Jenny McCarthy, whose son was born with autism, had already begun to drum up fear of vaccines, and haven't much abated since. In the process, the anti-vaccination scare has brought back diseases to the U.S. like measles, which had been declared eradicated in the Americas in the year 2000, and has caused thousands of deaths around the U.S. from preventable diseases.

But, while the vaccine scare may be the most deadly of the claims tied to autism, it is far from the only one.

Just recently, PETA released an ad campaign called "Got Autism?" linking cow’s milk to the disorder, citing two old and incomplete studies. However, anyone who looks into the research realizes the studies do not claim what PETA says they do. One of the studies cited by PETA, published in 2002, observed that 20 children who had a dairy-free diet saw improvement in autism symptoms. Notably, the study said precisely nothing conclusive about the cause of autism. More to the point, 20 people does not a representative sample make. And the researchers themselves acknowledged that the study was single blind, meaning they knew during the experiment which children belonged to the control group (maintaining normal dairy intake) and which ones were eating dairy-free -- a problem especially for observers expected to  make unbiased judgments about improvements (or the lack thereof) in the symptoms of autism. Still, it was enough for the folks over at PETA to draw their own link. Now, suddenly, milk "may" autism.

And here's another example: Anyone out there who has a child has most likely heard of Pitocin, a drug made to mimic oxytocin, a naturally occurring hormone in a women’s body, and given to mothers who are having trouble going into labor on their own. Doctors prescribe first, rather than jumping straight to the surgical option, a C-section.

In a 2013 study conducted by Duke University, children born to mothers who were induced, or whose contractions were augmented, "experienced increased odds of autism." The problem? It showed zero conclusive cause and effect between induced or hastened labor and autism.

To quote Emily Willingham of Forbes:

What they did not include in the study (likely because it was unavailable) are the following possible influential factors: mother’s BMI pre-pregnancy, father’s age, child head circumference, specific child birth weight, mother’s insurance status, family socioeconomic status (there appears to have been a stand-in factor for that), the presence of any sibling births in the cohort, and whether or not the child had autistic siblings. Lack of availability of relevant data can sometimes make a study untenable, at least, and at best should warrant considerable caution in interpretation and speculation.

The study, in short, says there are increased odds that a child will be born with autism if the labor is induced, but was not able to account for any number of confounding variables for which data was unavailable. (The study did control for "potential confounders," but not the ones listed above, Willingham explains.)

So if pesticides, milk, vaccines and Pitocin are not to blame for autism, what is?

As stated previously, we just don’t know. Today’s fad is to blame pesticides and tomorrow’s could be to blame peanut butter in plastic jars. With each claim will come unwarranted hysterical reactions that are not based on solid scientific findings, but instead by a public hungry for conclusive answers where none yet exist, and a media more than happy to stoke speculation. And that's dangerous, because claims that haven't been tested and retested, subjected fully to the rigors of the scientific method and peer review, can have deadly consequences.

Update: This article originally stated that PETA's "Got Autism?" campaign explicitly claimed that milk causes autism, a suggestion that PETA has disputed. In an email to Salon editors, a PETA representative claimed that the campaign "simply informs others that many families have found that a dairy-free diet can help children who have autism."  In truth, the "Got Autism?" campaign web page does not claim a definitive causal link, but it does state that dairy products "may" cause autism, a claim that has not been substantiated by a large body of credible, peer-reviewed research. The article has nonetheless been updated to reflect the specific wording on PETA's website.