The novelist and former "L Word" writer on why she made her protagonist a straight, white, upper-middle-class male 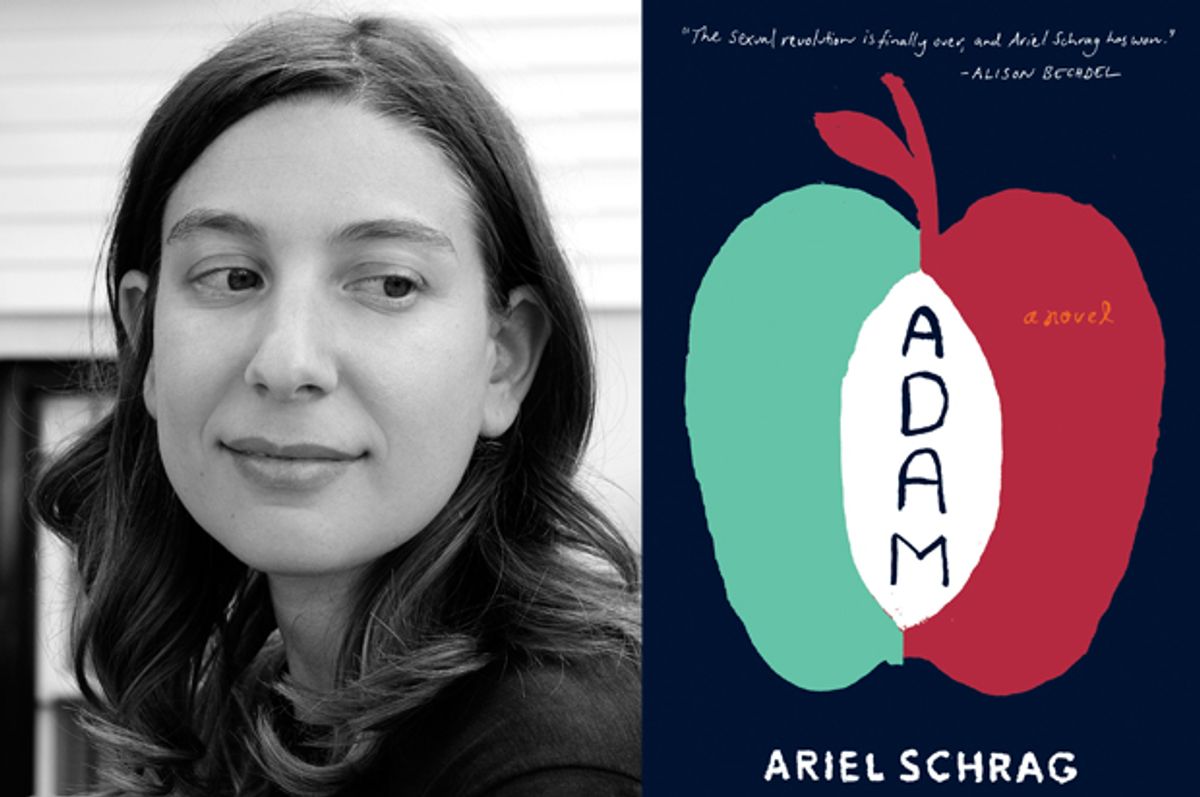 Ariel Schrag has been chronicling queer life since she was 16, starting with her autobiographical comics "Potential" and "Likewise," and later as a writer on the TV series "The L Word." Now her debut novel, "Adam," takes another look at a queer subculture, this time through the eyes of a straight teenage boy. We meet 17-year-old Adam in the summer of 2006 when he is visiting his gay sister, Casey, in New York. While tagging along with her to underground clubs (queer nightlifers will be happy to see the Hole, the beloved East Village bar that was shuttered in 2005, make an appearance here), political demonstrations and boozy house parties, Adam meets Gillian, a 22-year-old lesbian whom he deceives into thinking he’s a trans man. Schrag is able to play on readers’ expectations by playing on both the coming-of-age tale and the coming-out novel — calling on conventional frameworks to explore unconventional subjects and ideas. She brings what we might think of as mainstream and marginalized voices into one dialogue, creating a book that’s startling, very funny and the first of its kind.

I moved to NYC in 2005, and I was excited to see a queer world I was very familiar with explored in a novel. Did you feel a responsibility to portray it accurately?

It was exciting to paint a portrait of a world that I had never seen depicted before. But I didn’t want to think too much about responsibility because it would make the writing self-conscious. That was part of why using Adam to describe the world worked; his attitudes and his views could be really blunt. Someone within that crowd is already speaking in a language of hyper-awareness about different identities that are unfamiliar to the rest of the world. Adam wouldn’t have that issue.

Your choice to use Adam to describe this world was a premise that I was wary of at first, but ended up thinking was really interesting. Can you talk a little about the choice to use this perspective?

I liked the idea of writing a book about this world but filtering it through the ideas of somebody aligned with the mainstream. It could give me a chance to address all the judgments and confusion that people have head-on, without having to be didactic. And it could also open people’s minds in a way that you can’t when you enter a subculture within a subculture because you still see it as an Other. I thought having the mainstream enter that Other would be a good way to write about it.

Were you thinking about reaching a larger audience or making a bigger impact?

I didn’t work with any intended audience in mind or any larger goal than to write something that I would like or would amuse me. I did take the skills I learned in screenwriting and apply them — the idea that you can write about risky stuff if it’s in a familiar format. I wanted to take this very classic YA-esque, coming-of-age, teenage-boy-looks-for-love story that we all know, but address all these other issues. I didn’t know if it would make it more accessible but it was how I saw the story working.

In the course of the novel, it becomes clear that Adam is privileged to get to be a part of this queer community, which he realizes. This is interesting because he comes from what we would call privilege: male, white, straight, upper-middle-class. What were you trying to say here?

The fact that Adam is straight, white, male, able-bodied and upper-middle class was a conscious decision. There's a school of thought that the only people that are able to experience a "true self" are people like Adam, those who don't contend with some form of marginalization in their life experience. When some aspect of your identity constantly puts you at odds with society it's hard not to let that aspect largely define your identity as a whole. I thought it was interesting to take the most privileged person, the person who supposedly has the opportunity to experience a "true self" and have them feel like they actually have no identity — have no idea who they are — and are envious of the community and identity they see in those who are marginalized. Also, people like Adam — of utmost privilege — often go through life never thinking about what it might be like to live life as someone marginalized or about the politics of personal experience. I wanted Adam to not only have a shift in perspective but also realize how lucky he is to be part of this community and be changed by it. To not take that experience for granted.

Adam has the experience of being a part of this community by pretending to be a trans man and as a result, he sort of grows up in the process.

[I wanted to talk about] what it means to become a man and a good man. Maybe a female to male trans person has a lot more to teach a boy about being a sensitive man or a conscious man or a self-aware man than a cis man does. So many cis men are just not self-aware about their place in the world, and trans men are.

As you said, you wanted to bring a lot of the judgments out there into the foreground, and so as a reader we have to hear all the sexist, transphobic, homophobic things that go through Adam’s head. Can you talk about writing in that voice?

I wanted to throw that stuff out in the open because when it’s hidden people just get to keep on thinking it. You need to announce that people are thinking these things if they’re going to change. And I think the impulse is that you want to write things that disturb you, right? You don’t want to just write something that you already agree with — what’s the point? The thrill in writing is to address areas of tension and confusion and things that scare you.

I’ve had homophobic thoughts, and transphobic thoughts; I think everybody has had myriad feelings inside of them at various points in time. I don’t think anyone is exempt from prejudice and so it felt realistic to have these characters saying and thinking these things. I don’t think you can move past a point of prejudice unless you acknowledge that it exists. The main thing about Adam is that he can be judgmental but he’s very accepting. There’s this typical story of the really hateful homophobic person who has a revelation and then becomes really nice — like that "Dallas Buyers Club" movie — that just drives me crazy!

Adam is very accepting; he doesn’t have any reason to be homophobic or transphobic, he just doesn’t care or think these issues have anything to do with him. It’s not on his radar. I think moving from a stasis of nothing, or indifference, to a point of caring is almost more important than moving from a point of hatred to acceptance.

There’s a section of the book where Adam is learning everything he can about being trans and presenting all the information he has gathered in an educational way. It struck me as a sort of call to action to cisgender men and women, queer and straight, to learn.

On the one hand, that part was kind of a joke. Obviously a bunch of rote, memorized facts does not add up to a real trans experience. But it’s still a cis boy actively educating himself about what it means to be trans, which is not what most people do. I liked the idea that he would be studying up on it like he would for a test.

I think you are very careful in showing that this “community” is not a utopia — it’s full of allegiances and divisions and blind spots — which you show with a lot of humor. I loved the scene at the gay-marriage rally, when Adam’s queer sister, Casey, comes into contact with the anti-gay-marriage group. As Adam describes it: “He could tell Casey was quickly realizing that there was something not cool about being for gay marriage.”

I wrote that section at a time when gay marriage was all over the media and assumed to be universally good and what everybody wanted. I thought it was important to acknowledge there were a lot of differing opinions about that. In some ways, the scene is about what it’s like to be 19, when you can feel that you have very deep-seated politics but your No. 1 priority is being cool and hooking up with someone. But Casey is also having an instant revelation here, like, oh, my God, maybe what I’ve believed about gay marriage is wrong — the shock that can happen when you’re young and starting to really think for yourself.

Adam and many of the characters in this community are fueled by a quest for romantic love and sex. But the book ends up being more about learning how to be a good person and a good friend. I am thinking particularly of Adam’s friendship with Ethan.

I think that on the surface Adam’s goal is to go to New York and make out with a girl and that’s how the book is being described. But I would say that he goes to New York because of his lost friendship with [his friend from home] Brad — it’s not about a girl. What he’s really looking for at the end of the day is another best friend. And that’s what he finds in Ethan. That’s what really matters when you’re that age, too; nobody’s falling in love and getting married. When you’re 17, what you really need is friends.