How Miley Cyrus went from sensational to predictable

Her NBC concert special lacked all the strange, compelling energy of her VMA performance 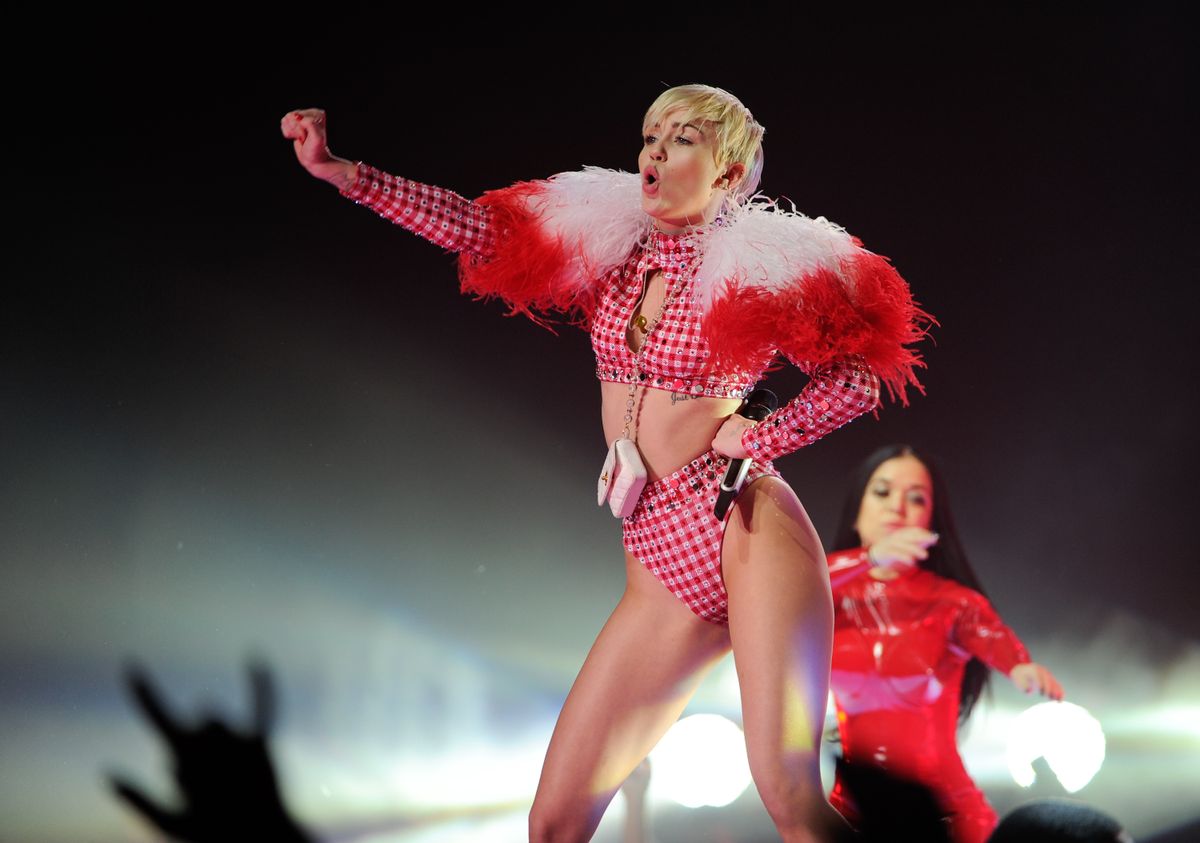 No one represents the current state of event television better than Miley Cyrus, whose NBC special last night, too, illustrated the limits of spectacle.

Cyrus has, in less than a year, risen to megastardom with a carefully groomed image of someone who just doesn't care about propriety. In a time when only live spectacle seems to draw audiences consistently, the young Cyrus did MTV a favor last summer by providing the only real energy at a Video Music Awards ceremony packed with much bigger stars. Cyrus had seemed like a surprising choice even to perform at the ceremony, but had become the evening's breakout star by the end of her performance.

Cyrus' routine -- dancing aimlessly when not twerking in a racially charged manner, cavorting with dancers in fuzzy mascot costumes, being sexually charged in every direction with no real object -- was totally unlike anything else in the fairly staid pop scene of mid-2013; major stars like Katy Perry, Lady Gaga and Justin Timberlake had far more to lose and seemed, by comparison, boring.

But, having sat through two hours of Cyrus last night, I'd rather have watched any of those three do a two-hour concert special. I am basically a fan of Miley Cyrus, but the NBC show made a horrible case both for her fame and for the existence of the concert special in general. The camera jittered around, unsure of where to stop, and so one was always aware that a lot was happening onstage but not able to see it all. I've seen YouTube videos of Cyrus' tour, for instance, that conveyed the strange animation sequence that opened the concert far better than the NBC special did, which kept cutting from Cyrus to her dancers to fans in the crowd.

It's hard to blame anyone involved in the editing room, though, for not knowing when enough was enough; the entire concert seemed to overwhelm Cyrus, a very skilled singer who by the end was resorting to basically grunting through her lower register. She'd been, after all, running around, climbing different set elements, and changing costumes for hours. (To her credit, she's canned what had been the most disturbing aspects of her VMA act, like slapping black women.) Cyrus combines an insouciant attitude toward pop-world norms with a clear desire to entertain, but a little less stimulation would have actually made her show a lot better, at least on TV. And she needs to learn something about tone, as when she concludes her deeply sad breakup song "Someone Else" by riding a giant synthetic hot dog off the stage.

The best part of Cyrus' VMA performance was its contrast to the rest of the oddly mannered show; Cyrus' energy has to be put into conversation with something in order to be entertaining instead of exhausting. Five minutes of Cyrus is exciting; two hours, intercut with brief monologues about how her creativity changes the lives of all of those around her, feels grindingly excessive. (Maybe any pop star's act would! The concert special feels a bit much in an age when YouTube videos of each individual live song are available à la carte.)

And when not surrounded by everything against which she's rebelling, Cyrus' fripperies seem more like blown opportunities -- her out-of-breath gasping and too-high-cut leotards taking attention away from her often very good songs. NBC clearly sought to capitalize on Cyrus' fame from last summer -- a concert special some 25 times as long as her VMA performance would get 25 times the buzz, right? But without any context or any restraint, Cyrus feels like the sort of act that may have worn out her welcome before it's time for her next album.