I spent the better part of a day absorbed in the app "Kim Kardashian: Hollywood." I wish I could say I regret it 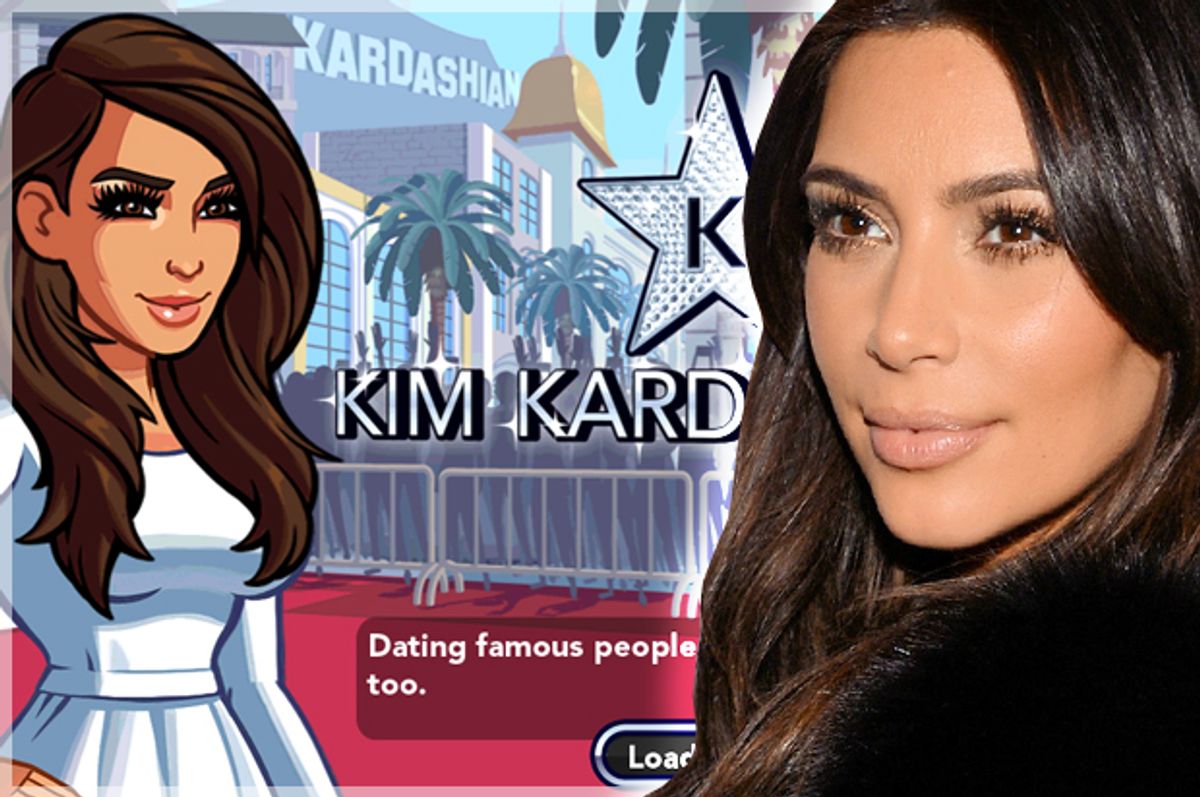 In Kim Kardashian’s new smartphone game, “Kim Kardashian: Hollywood," the player aims to rise through the Hollywood ranks from a lowly retail position to A-list celebrity. This is accomplished by completing a series of tasks such as photo shoots, appearances at local clubs, and promotions for high-end vodka brands. A secondary element involves networking, flirting and dating to gain status (totally acceptable in Kardashian Hollywood, but more on that later). The game was released over a week ago and quickly landed a No. 2 spot in the app store. While I’m sure that most users are not downloading it in search of a well-crafted story line or embedded cultural critique, I have to admit that the game was more nuanced than I’d expected. Don’t get me wrong: It is ridiculous, shallow and strange. But “Kim Kardashian: Hollywood” also manages to comment on contemporary ideas about celebrity, status and success in a surprisingly interesting way. Also: I couldn't tear myself away from it.

The first pivotal point came early in the game. My avatar was working at “Chic Boutique,” an L.A. clothing store. I was folding clothes as my hostile manager glared at me from a distance. He then asked me to close down the store, and I was doing so, I had an important chance encounter with--you guessed it--Kim Kardashian, voiced by the real Kim K. To be fair, it wasn’t exactly “chance” since this is how the game starts for anyone who plays. But anyway: The reality goddess herself showed up and asked whether the store was still open. I was required to choose from three possible responses: 1. “Still open …” 2. “Just closing …” and 3. An exclamation of “Kim Kardashian!” This was when I had to decide exactly what kind of player I wanted to be. While I wasn’t sure what the “right” answer was, I had a pretty good guess. I felt like shouting “Kim Kardashian!” at Kim Kardashian probably wasn’t it. Saying that we were still open seemed like my best bet. However, something in me, that part of my brain that enjoys a bit of harmless defiance, decided to tell her that we were closing.

I wish I could say that Kim’s avatar stormed off in a fit of rage at that point while screaming, “You’ll never work in this town again!” That is not what happened. But what did happen was somehow more telling: a little gray cloud formed above her head, and she asked me the question again. This time I was only provided with one possible response, some version of “Yes, come in.”

And so I helped Kim pick a dress for a photo shoot. She was extremely grateful, and she even invited me to an exclusive A-list event that evening. From that point on, Kim Kardashian was indebted to me, a mere shop girl. It was just like a fairytale! A fairytale in which you are repeatedly told that you aren’t important and that your outfit looks bad.

From the very beginning of “Kim Kardashian: Hollywood,” it’s understood that appearances are everything. The first thing players do in the game is “kustomize” an avatar. Once again, that’s Kustomize, with a “k.” The game provides a depressing array of physical features to choose from – pouty lips, shapely noses, doll-like eyes, etc. Then, of course, it’s time to select your outfit. Knowing that I would be starting off as a sales associate in a high-end boutique, I wanted to dress to impress. Unfortunately, my affordable options were limited to an assortment of casual crop tops, which to me didn’t really scream “upwardly mobile professional.” I guess, in this world, you’ve got to work your way up to being able to wear a whole shirt.

No surprise here: Fashion plays an important role in “Kim Kardashian: Hollywood.” When I met characters throughout the game, they would often say things along the lines of, “Are you sure you want to start your photo shoot wearing that?” Intellectually, I knew that these were just digital people, a collection of zeroes and ones decked out in spike heels and funky miniskirts, but dammit if they didn’t bruise my virtual pride a little bit.

At first, as I watched my avatar roam around her day job, I took her lackadaisical stance and eye rolls as indicators of professional listlessness -- perhaps an existential yen to one day reach even higher than the So Chic Boutique. But, as it turns out, that’s her default stance throughout the entire game. In fact, that’s how every woman in "Kardashian: Hollywood" appears. While clubbing, while traveling, while having important conversations with agents, these avatars just stare at their fingernails and look gloriously, strategically bored.

I found myself continually mesmerized by the economy of “Kim Kardashian: Hollywood.” For doing almost any task – flirting with a director, consuming vodka, walking across a room – I was handsomely compensated. Money would explode from the ceiling, and I collected it off of the floor. This eKonomy was ruled by a simple calculation: doing anything + existing = money.

Purely by accident, I discovered a secret source of income that I am certain not all players know about: birds. Take any bird in the game -- if you tap it, it explodes with money. Once I discovered this, I ignored most of my tasks and spent my game walking around Los Angeles, poking birds, and praying that they would be chock-full of cash. Does Kim Kardashian employ this same financial strategy in her career? If not, please don’t tell me; I want to believe it's true. Then there’s the matter of relationships. When you return to the game from a quick detour into your actual life, Kim is often there waiting with pearls of wisdom. One of the phrases you’ll read a lot as a player is: “Dating famous people will get you more fans.” In my real life, it would never occur to me to date someone on the basis that it would attract more fans (and this doesn’t seem to be in the cards, since I’m already married), but in "Kardashian: Hollywood," I decided to date absolutely anything that moved. Men, women, birds – I didn’t care. When the option presented itself to “network” or “flirt,” I always chose “flirt,” and the payoff was substantial.

But trouble was on the horizon. By incessantly flirting with every person in the game, I ran into a problem. One day a woman named Willow Pape angrily approached my avatar outside of a bar in Beverly Hills and accused me of flirting with her boyfriend. Let the record show that in real life, I would take this opportunity to apologize profusely and let her know that this was all a horrible misunderstanding. In the game, however, suddenly overcome by a tidal surge of swagger, I chose to respond with, “So what if I did!”

From here on out, Willow Pape became my sworn enemy. Later on in a club in Miami, my avatar threw a drink in her face. I was expecting to lose money or points every time I created conflict with Pape, but as it turns out, the contents of my fictional bank account only grew. In Kardashian Hollywood, you make just as much money in maintaining enemies as you do in keeping friends -- actually, probably more. In this virtual universe, the one thing worse than working in retail is being too tired to work at all. Your own social stamina is literally the only limit. In the game, you have a finite number of energy tokens, and once you’re out of energy, you can’t really do anything for a while. You can’t network, you can’t pose flawlessly in photo shoots, and you can’t go on dates with high-status podiatrists. All you can do is the unthinkable: wait. And no one wants to wait, which is why the game comes with the option to use your actual, hard-earned money to buy more energy tokens. I thought this seemed imprudent, which is surely why I did not manage to climb my way to A-list celebrity status while playing this game. Look, here’s the thing about “Kim Kardashian: Hollywood”: Playing this game is not the worst way you could spend your time. Certainly there are more painful experiences to be had in life, chief among them watching “Keeping Up With the Kardashians” or “Kourtney and Kim Take Miami.” Playing Kim Kardashian’s game is a drastically different experience from watching her reality shows: Getting plunked inside the machinery of her universe makes you feel -- no mater how much you plead ironic distance -- at least partly like a co-conspirator. Without the queasy voyeuristic cocktail of disgust and awe that overtakes you while watching the real Kim K lazing at her gold-plated mansion, you’re left only with your own consuming drive to win.

That being said, I’ve already deleted this app from my phone, not because I think it’s corrupting my worldview or because I believe that playing it will corrode our culture’s moral fabric, but because I suddenly realized I was far too absorbed in Kardashianland. Clearly this is just a game, a cartoonish exaggeration of Hollywood stereotypes. Though I’ll never know -- having never reached the holy grail of the A-list -- I suppose it’s possible that the game is programmed to end with a much-needed existential crisis. Perhaps, after reaching full-blown celebrity status, your avatar takes a look at herself in the mirror and says, “What’s next for me? My god … what have I become?” But that seems doubtful.  The bottom line of “Kim Kardashian: Hollywood” -- sad and inevitable as it sounds -- is that, alas, it's pretty fun to play.